How To Enable Facebook Messenger’s Secret Dark Mode On Android

I’m a tremendous fan of using “dark mode” or ”night mode” on my phone whenever possible. Beyond just being easier to look at, dark modes use less battery power since your phone’s not having to power that bright white screen.

At F8 last year Facebook announced plans to roll a dark mode for Facebook Messenger on Android, and now it looks like the feature is available for everyone, except via a secret easter egg-style mode rather than the actual settings menu.

Enabling the mode is done in a bit of an odd way: You have to send a moon emoji to someone, specifically the half crescent. 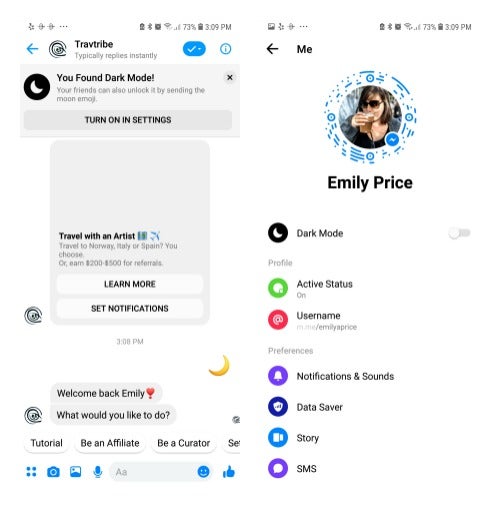 When you enable the feature, you’ll also get a warning that it’s a work in progress and might not be available everywhere in Messenger for the time being.

The good news is you don’t actually have to send that crescent to a friend. I unlocked the mode by messaging a spammy Facebook bot.

I’ve only been playing around with it for a day, but so far I also haven’t run into spots where the dark mode doesn’t work. While those spots clearly exist (or so says the warning), you probably won’t encounter too many of them.