Gmail’s template feature just got a badly needed redesign. Poorly named “canned responses,” this isn’t the feature where Gmail suggests a two-word reply to an email. (That’s “smart reply.”) This is a much more useful feature, buried in the “Advanced” settings menu on Gmail’s desktop interface, that lets you save multiple emails to reuse whenever you’re composing an email.

It’s a very useful feature, a kind of dedicated clipboard for your email. You can use it to store your professional bio, or a standard rejection letter, or a template for anything that you’ve found yourself emailing multiple times.

From any compose window, you can paste in one of your templates, or save your current message as a template.

The feature appeared in Gmail Labs 10 years ago, and has looked pretty much the same since then. After you enable the feature, it’s available in any window where you’re composing an email (including replies).

Click the three-dot menu in the lower right of the compose window, next to the trash can, and near the top of the pop-up menu you’ll see “Canned responses.”

Until recently, when you opened the canned responses menu, you’d see a list of your current saved emails—but you’d see it three times. One list was for inserting a saved template, one for overwriting the saved template with your current draft, and one for deleting a template. It was cluttered, and I frequently came very close to deleting my email templates.

(At least Gmail popped up a warning before deleting or overwriting.) 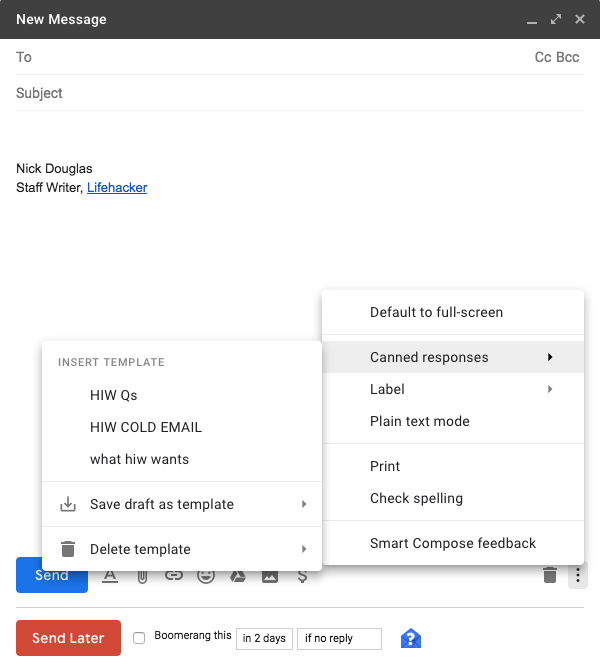 But now! Gmail has hidden the “save” and “delete” options behind their own submenus, acknowledging that you don’t need those options nearly as often as you need the “insert” option. It’s a much smarter design, and it makes email templates a lot more useful.

Especially if you follow Lifehacker’s advice on writing the ultimate form email.