The ACCC’s annual report into the telecommunications market makes for some fascinating reading and challenges many of the “truths” we sometimes hear. Much of what the ACCC reports is very positive: the costs of plans are decreasing with data and call allowances increasing at the same time. And while there are some who say a fixed cable internet infrastructure isn’t needed in the wireless age, the data suggests something else entirely.

As expected, the number of people relying on Telstra’s legacy copper network is down by 1.5 million subscribers with NBN activations over the last year increasing by about the same amount.

Pricing, particularly for mobile services and mobile broadband, was down on the previous year. With Vodafone trying to regain ground after a couple of horror years with service issues and Telstra rationalising their phone plans as part of its Telstra2022 initiative there’s been more competition giving customers more choices and access to more flexible pricing plans. 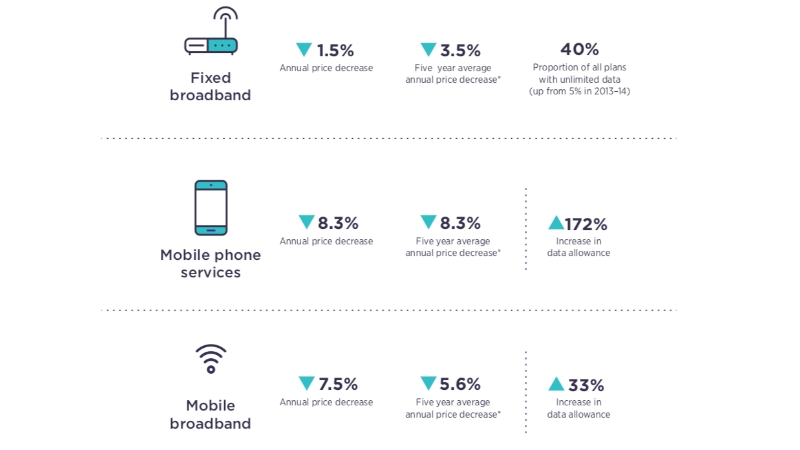 On the fixed broadband front, the NBN, despite many challenges, has created a new environment. With Telstra no longer having a stronghold on communications infrastructure, competition has been reinvigorated. And the ACCC’s intervention to ensure RSPs meet their performance commitments has resulted in better transparency in those services.

One of the big criticisms the NBN faces is the notion that mobile broadband services will usurp the need for fixed connections. While that might happen one day, we are still a long way away.

Over 90% of our data downloads occur over fixed services with mobile broadband and handset traffic accounting for just 9% of data downloads. That’s on the back of 29% overall growth in downloads. The commission noted that “The total volume downloaded increased by 29 per cent over 2017–18 (measured between the June 2017 and 2018 quarters), likely reflecting an increased use of content streaming services, social media and other content-rich applications”. 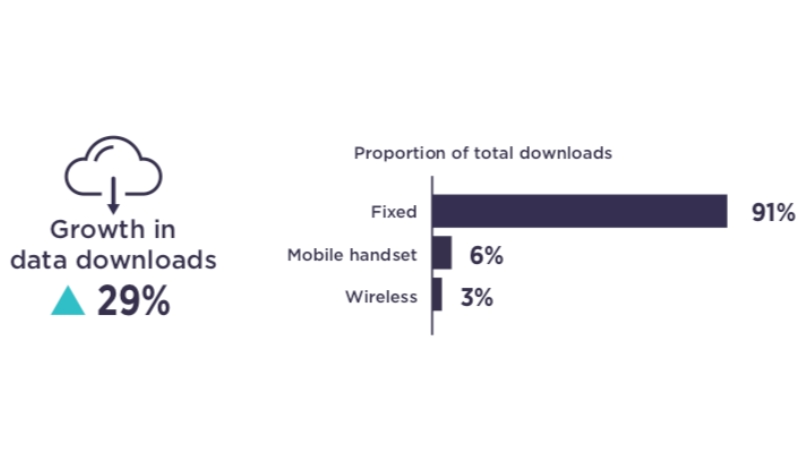 It also found the number of broadband plans offering unlimited downloads was up from 24% to 40%, suggesting that once limits are lifted, people do use more data. Speed is also important with more people gravitating to faster connections according to the ACCC. Its data found the proportion of services at the 50 Mbps speed tier has risen from 4% to 35% in a year.

That thirst for more data means customers are looking for options on both the fixed and mobile fronts and that’s resulting in greater investment in infrastructure. We’re already seeing Telstra and Optus in a race to deploy 5G faster and when the NBN moves into an area residents are often flooded with offers from RSPs.

It was interesting to note that Mobile Virtual Network Operators are starting to take some market share away from the Vodafone, Optus and Telstra.

Which Network Does Your Phone Plan Really Belong To?

One of my favourite terms, penned by Scott Adams - the creator of the Dilbert comic strip, is confusopoly. It's basically a market that is designed to obfuscate information from consumers so they can't easily compare services between providers in a market. The mobile phone market is notorious for this.

But the old chestnut about regional areas being left behind remains a concern for the consumer watchdog. The report noted that they had made recommendations to the Communications Minister, Mitch Fifield, about how mobile spectrum for 5G should be allocated.

On 4 May 2018 the ACCC provided advice to the Minister in response to his request on whether allocation limits should apply for an auction of 125 MHz of spectrum in the 3.6 GHz band in metropolitan and regional areas of Australia. This spectrum represents the first band harmonised for 5G technology in Australia. Following targeted industry consultation, we recommended that limits of 45 MHz apply in Sydney and Melbourne and 60 MHz elsewhere, across the 3.4–3.7 GHz band. Our reasons were to:

The Minister did not accept the ACCC’s advice instead imposing limits of 60 MHz in metropolitan areas and 80 MHz in regional areas.

Once again, when it comes to broadband access, regional areas were bushwhacked.

You can read the full ACCC report here.