Combine All Your Messaging Apps With Volt

Between Slack, WhatsApp!, Facebook Messenger, Skype, Hangouts and Telegram, I’ve been known to miss a message or two as I suffer from notification fatigue and forget to go back to an app. Volt aims to end that pain by delivering a single messaging platform that brings a bunch of different messaging systems to a single screen on Mac, Windows and Linux systems.

Volt is still in the early days of its development but if it delivers on its promise then it could become essential.

I installed the Mac version – Windows and Linux versions are on their way this month according to the website – but it currently only supports Skype and Slack. I tried to connect Signal, Facebook and WhatsApp! to Volt but support for those isn’t coming until later this month. 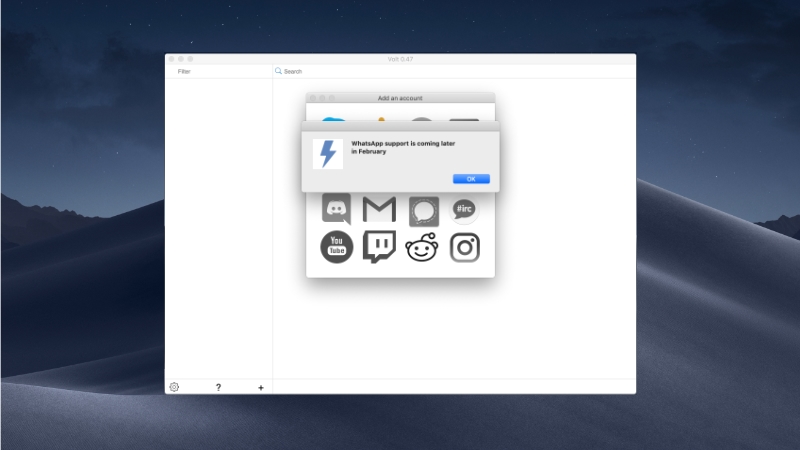 With any app like this, that provides a gateway into other services, there’s always a concern about security. Volt’s developer says the software doesn’t ask for passwords or store them anywhere. Authentication is performed in a browser directly on the messenger’s website. They add that there’s no data sharing with third parties although Volt does stores your messages and contacts locally for offline use and better performance.

The app is free although you can support the developer, Alex Medvednikov, through Patreon. There’s no plan to run ads or sell user data which has me wondering how he can work on this full-time if it’s not going to generate any revenue.

The software is raw at the moment and clearly needs some work. But if Medvednikov gets it right then he may have a popular app on his hands. I plan to keep an eye on Volt’s development as it could be a very useful app if it comes together.