This Free App Can Protect You From Hidden Credit Card Skimmers

Android: Whenever you put your card into an ATM you run the risk of having your information skimmed.

To some extent, skimming is one of those things you don’t realise you’re a victim of until long after it happens. In the past few months, I’ve had a number of friends discover that their credit card numbers were being used by identity thieves who presumably captured their credit card information while they were withdrawing money.

Fortunately, there’s an app that might be able to help prevent you becoming a victim.

Called Skimmer Scanner, the Android app (unfortunately, there’s no iPhone version) looks for a Bluetooth module near that ATM that is typically used with credit card skimmers.

ZDNet explains that the module is what typically allows skimmers to download all the credit card numbers they’ve captured without getting detected. The skimmer transmits numbers to the module where they’re all saved until someone comes along to collect them.

Since the person isn’t physically interacting with the skimmer, they could just be sitting in a car nearby downloading numbers.

You’d think that a device broadcasting a Bluetooth signal would catch someone’s attention, but apparently not.

However, that Bluetooth signal can work to your advantage. Using Skimmer Scammer, the app will find the Bluetooth signal coming from the skimmer and let you know that where you’re thinking about using your card is potentially unsafe. 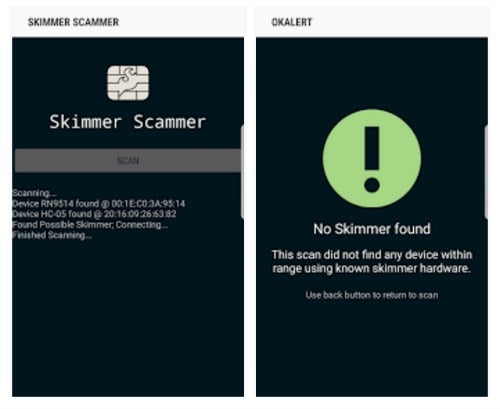 As it turns out, a lot of scammers acquire the exact same skimmers, and they aren’t super knowledgeable about how they work, so they don’t know how to fix their security vulnerabilities (go figure?). Most of the modules have the same device name (HC-5) and a pairing passcode of 1234.

It isn’t a fool-proof plan. This app is only going to find one type of skimmer, however it’s the most popular one. Launching the app before you use that ATM in the back of the bar could help you detect a non-tech-savvy criminal and save yourself the headache of dealing with stolen credit card numbers.