Prevent Your Windows PC From Sleeping With Caffeinated

I have a Trenta-sized amount of love of the Mac app Amphetamine, because it’s a great way to keep your MacBook from sleeping (or kicking on the screen saver) for any particular reason. And I’m ashamed to admit that it’s taken me a year, if not years, to realise that I haven’t installed a similar kind of app on my Windows desktop and laptop.

That app, Caffeinated, has only been tested on Windows 7 — claims its author — but I’ve been using it on Windows 10 for the past month. It works flawlessly. Download and unzip the tiny app, and you’ll get a single executable. Stash that in a folder somewhere, and create a shortcut to it on your Start Menu or desktop (for easier access).

When you fire up the app, it drops a little icon of a coffee cup in your taskbar. You’ll also get a handy pop-up window detailing the app’s few settings: 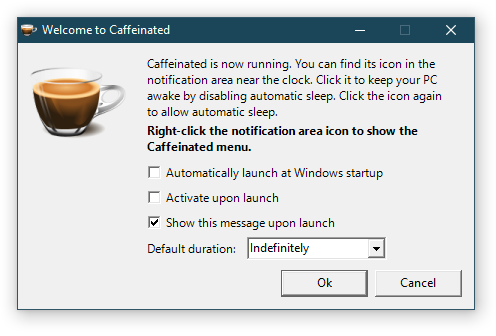 By default, simply loading the app doesn’t turn on the caffeine. Your system will still screen saver and sleep, if you’ve set it to do so within Windows. If you don’t tick that little “Activate upon launch” button in Caffeinated’s settings window, you’ll have to right-click on the icon and tell the app how long you want the juice to flow (a time ranging from five minutes to indefinitely).

Whatever your choice, Caffeinated will keep your system alert and active for however long you set it for. It’s a useful little tool if you don’t want your system’s power options to trigger while you’re giving a presentation or stepping away from your desk for a brief moment. Admittedly, Amphetamine’s triggering feature are more robust, but Caffeinated—like a quick shot of espresso—gets the job done without fuss.