I’m Shannon Watts, Founder Of Mums Demand Action For Gun Sense In America, And This Is How I Parent

Shannon Watts is the founder of Mums Demand Action for Gun Sense in America, a grassroots movement working to reduce gun violence. Made of teams of everyday Americans in all 50 states, the organisation has been called “the NRA’s worst nightmare.”

Most of my children and my career were surprises – good surprises. I had children early in life – all before I was 30. Then I inherited two stepdaughters before I turned 40. At the age of 41, I became an accidental activist by starting a Facebook page for American mums to talk about gun violence the day after the Sandy Hook School shooting.

I’d been a corporate communications executive for 15 years and then a stay-at-home mum, but was never very politically active. So to go from a stay-at-home mum to a full-time activist travelling the country to talk about gun safety was something I never imagined I’d be doing. That said, I think my experience in communications, branding and messaging helped Mums Demand Action become so visible so quickly.

I wake up every day at 6 AM – thanks to perimenopause, sleeping in is a distant dream. One daughter and my son still live at home – my daughter is in university in Denver and my son is about to be a high school senior. Each night I remind them to set their alarm clocks eleventeen times, but I usually end up waking them up anyway because they forget or they sleep through them.

Then I make smoothies (the only thing I can “cook” that is palatable), remind everyone to brush their tongues (not just their teeth), and make myself coffee while they get dressed. The rest of the day – if I’m not on the road – I’m at home taking calls, doing interviews, finishing homework for my graduate classes, getting in a hike or yoga, and meditating at least once a day.

Now that our kids are older and independent, it’s much easier to navigate who does what. My husband commutes to a job in California Monday through Thursday, but he cooks dinner when he’s home. I neither enjoy nor excel at cooking, so the kids and I usually eat out together the nights he’s gone (Chipotle knows us by name).

Also, I’m lucky that I live near my ex-husband and we have co-parented well together for over a decade. In fact, we strongly believe that our three parent model should be replicated in households across the world – that extra parent catches a lot of tomfoolery that would have gone unnoticed by the other two. 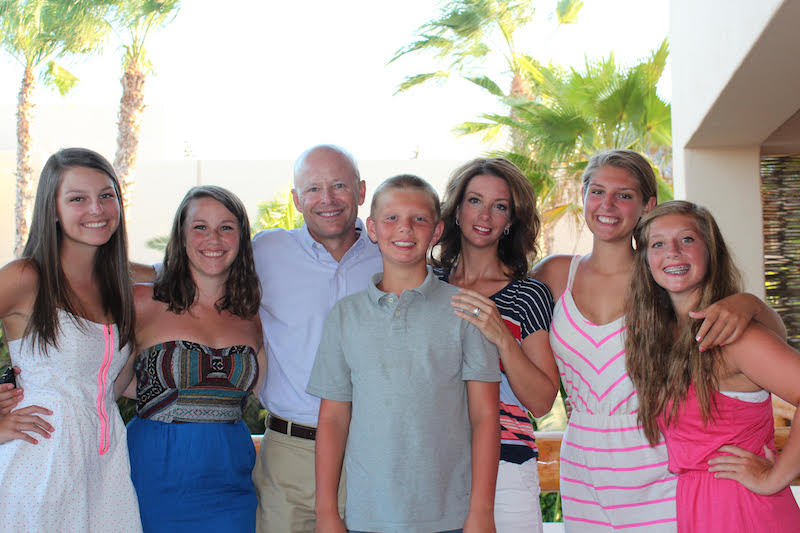 Watts and her family.

Watts and her family.

Back when I started Mums Demand Action, my husband did an amazingly generous thing: He found someone who could help with laundry (wash, fold and put away). It was like seeing the face of Jesus. Five kids generate a lot of laundry (including the one who kept bringing it home on weekends from university).

In addition, I’ve used the same virtual personal assistant for a decade. I can send her a project like, “Can you help me map out this uni visit in another state with Sam?” and she’ll work with me on all of the logistics – I just have to execute.

My Fantastical calendar app is the map of my life and if it ever stops working or goes away, you’ll hear my screams from neighbouring states. I take my Kindle everywhere and, as a result, have left too many on planes. My husband is frustrated by this, but I like to think I’m littering the world with literacy.

I use the Headspace app to meditate on the road. And my Apple Watch helps me disconnect from my iPhone and related apps, but I can still track my steps and get any emergency texts or calls from the kids.

I became much more of a multitasker after my kids were born. I can do about six different things at once, and do them well. That’s also what makes mums such great activists – we’re multitasking mofos (this is a T-shirt in the making). It’s important to me to show my kids that women can do whatever they want in life, but also that they’re always my priority. One of my daughters was diagnosed with an eating disorder two years ago.

As soon as we realised what was happening, helping her get better became my number one priority. It was important for her to know I was always available, and I learned a valuable lesson, too: The world won’t end if I’m unavailable 24 hours a day to my colleagues.

I can do about six different things at once, and do them well. That’s also what makes mums such great activists – we’re multitasking mofos.

How do you involve your kids in your work? 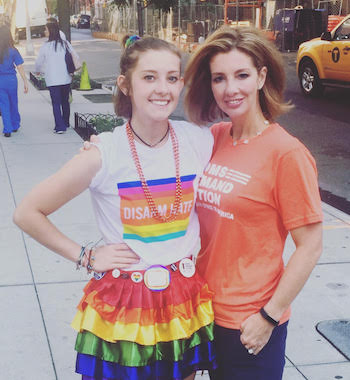 Watts and her daughter Emma.

Watts and her daughter Emma.

I’ve brought my kids to many Mums Demand Action events all across the country. It’s important for them to see what it is I’m working on all day, every day. And I want them to be motivated to get involved in activism – whatever that might look like depending on their own passions. One of our daughters is gay, and it was incredibly poignant to bring her with me to march with Governor Cuomo in New York City in the Pride Parade right after the shooting at Pulse Nightclub.

That’s why I do this work: To make sure she and everyone’s children can go where they want and live how they want and not be vulnerable to gun violence.

What’s the hardest part of parenting?

Not taking things personally. It takes a while to realise that. From the first time your kid closes his or her door at 12 or 13 to exercise their independence, to the hormone-induced rage strokes, to the acts of parenting that go unappreciated until they become parents themselves. I recommend the book Yes, Your Teen is Crazy!: Loving Your Kid Without Losing Your Mind by Michael J. Bradley to all of my friends and Mums Demand Action volunteers who struggle with raising teens.

There’s great advice in the book about how to respond to teens like a “dispassionate cop.” That’s key to not escalating bad teen juju.

Parenting is incredibly rewarding, but also incredibly hard. I imagined that the hard part would end when they turned 18, but it’s actually just an equally difficult but different chapter. The problems are more profound, their heartbreak more devastating, their mistakes more expensive — but the difference is that you’re helping them navigate adulthood as a more experienced parent who they can relate to as a friend.

One of my daughters – the one who least liked being parented as a teen – is now 22. She called me from the car the other day before going into a job and said, “What if I can’t do this?” I said, “I’ve known you your whole life. You can do this and you will do this and you will be amazing.” She paused and said, “You’re right. I just needed to hear that. Thanks mama.” I reveled in that small moment of finally getting to be the cheerleader instead of the disciplinarian.