How To Create The Ultimate ‘Kid Cave’

man caveoffspringplaydatesplaying
To sign up for our daily newsletter covering the latest news, hacks and reviews, head HERE. For a running feed of all our stories, follow us on Twitter HERE. Or you can bookmark the Lifehacker Australia homepage to visit whenever you need a fix.

I live in a twin home in Eastern Pennsylvania that was built in 1925. It is high on charm but low on other things, such as living space, storage and number of bathrooms. As my son has gotten older and playdates have morphed from involving a lot of necessary hovering (“Let’s remember to share!”) to more hands-off, we’ve struggled to find a space for him to hang out with his friends.

They’d play in his bedroom for a while, but we don’t yet allow him to have a TV in his room, so once they wanted to play video games or chill out with a snack and a movie, they were back in our living room, which is both small and right next to our also-small dining room/kitchen, which means we’d all be right on top of each other.

After a rainy summer and fall that caused some water damage to my 93-year-old unfinished basement, I was faced with a large (read: expensive) “water-proofing” project that included a sump pump installation and some nicer-looking (but still unfinished) walls. It occurred to me that with the brighter walls, a little furniture, an old TV and maybe a fluffy rug, I could turn a portion of the basement into a small gaming/hang-out space for my son and his friends. I dubbed my new vision “The Kid Cave.”

In the fall, I began purging and selling anything in my basement that did not bring me “joy” (or I hadn’t used in five years, which was often the same). 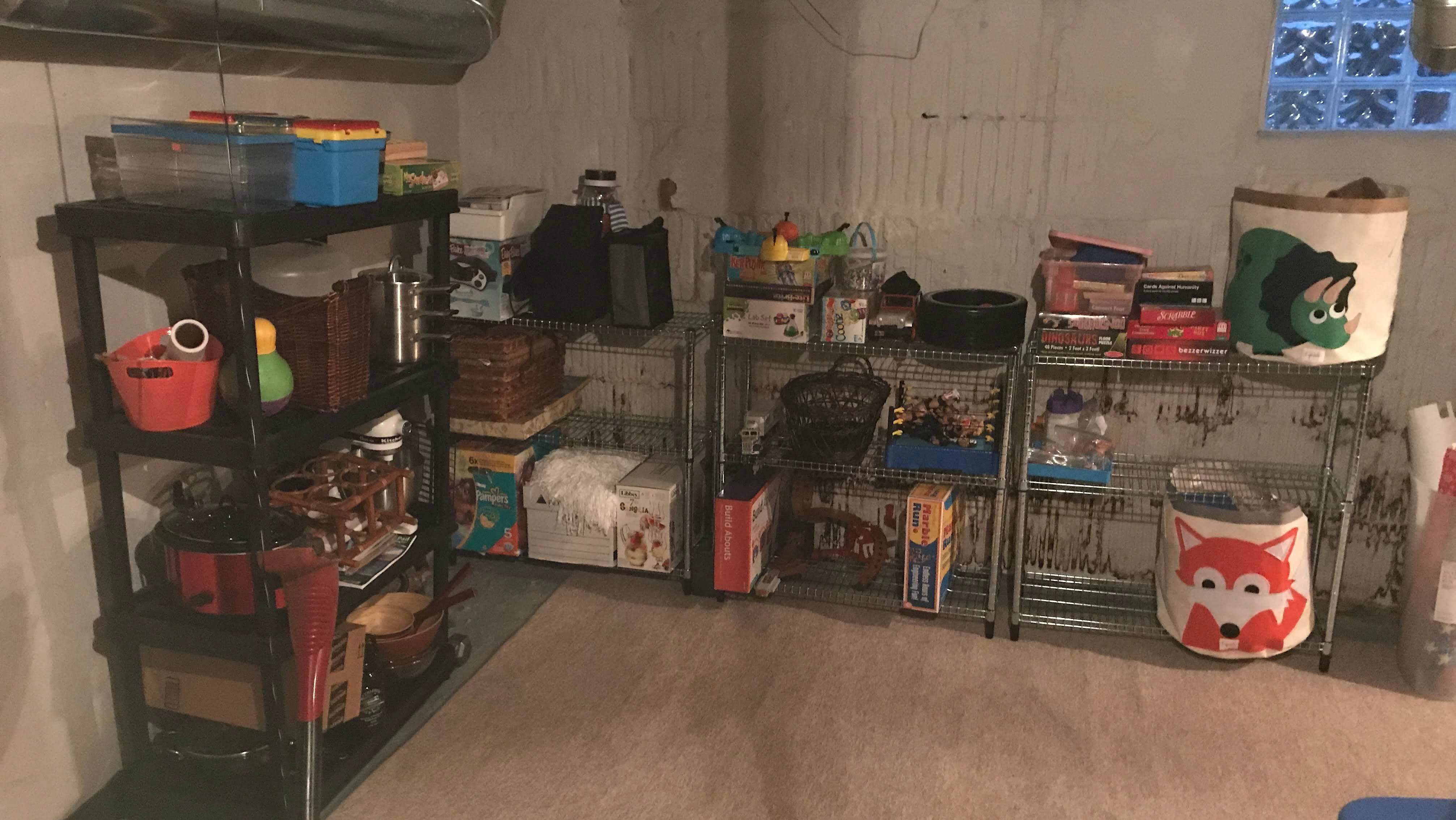 Next, four men came and created the biggest mess I’ve ever had the pleasure of cleaning up: 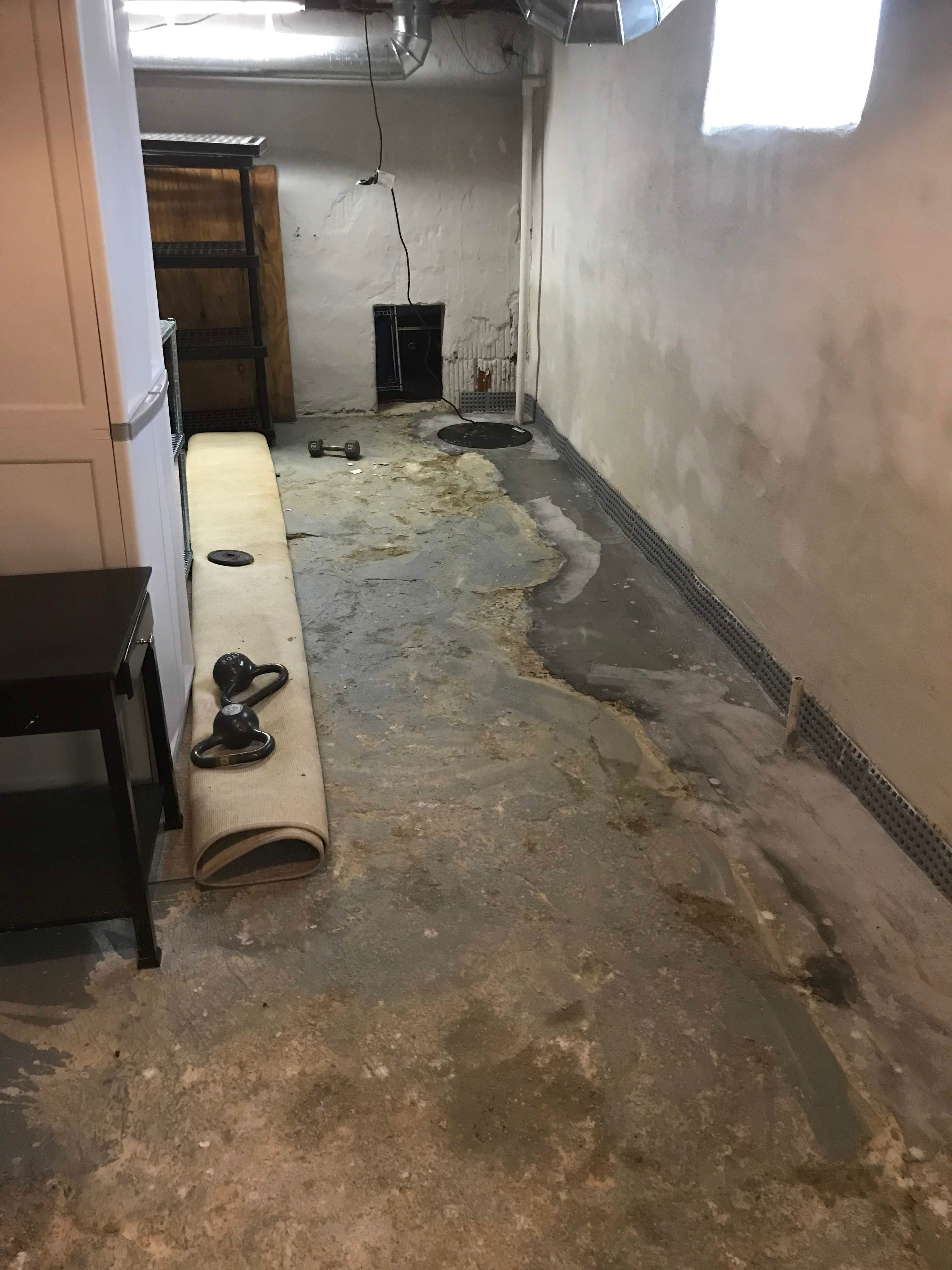 Then, I began searching for a way to decorate the space so that it would look whimsical and feel warm in the winter. I also needed a way to section off the “cave” from the other half of the basement, which is a storage and laundry area. Oh, and I didn’t want to spend a whole lot of money. He’d gotten a couple of posters and a “Kid Cave” sign for Christmas, so I knew those would go up on the walls. And we’d been planning to upgrade our main TV, so the old TV would be his. But otherwise, I was pretty much starting from scratch. 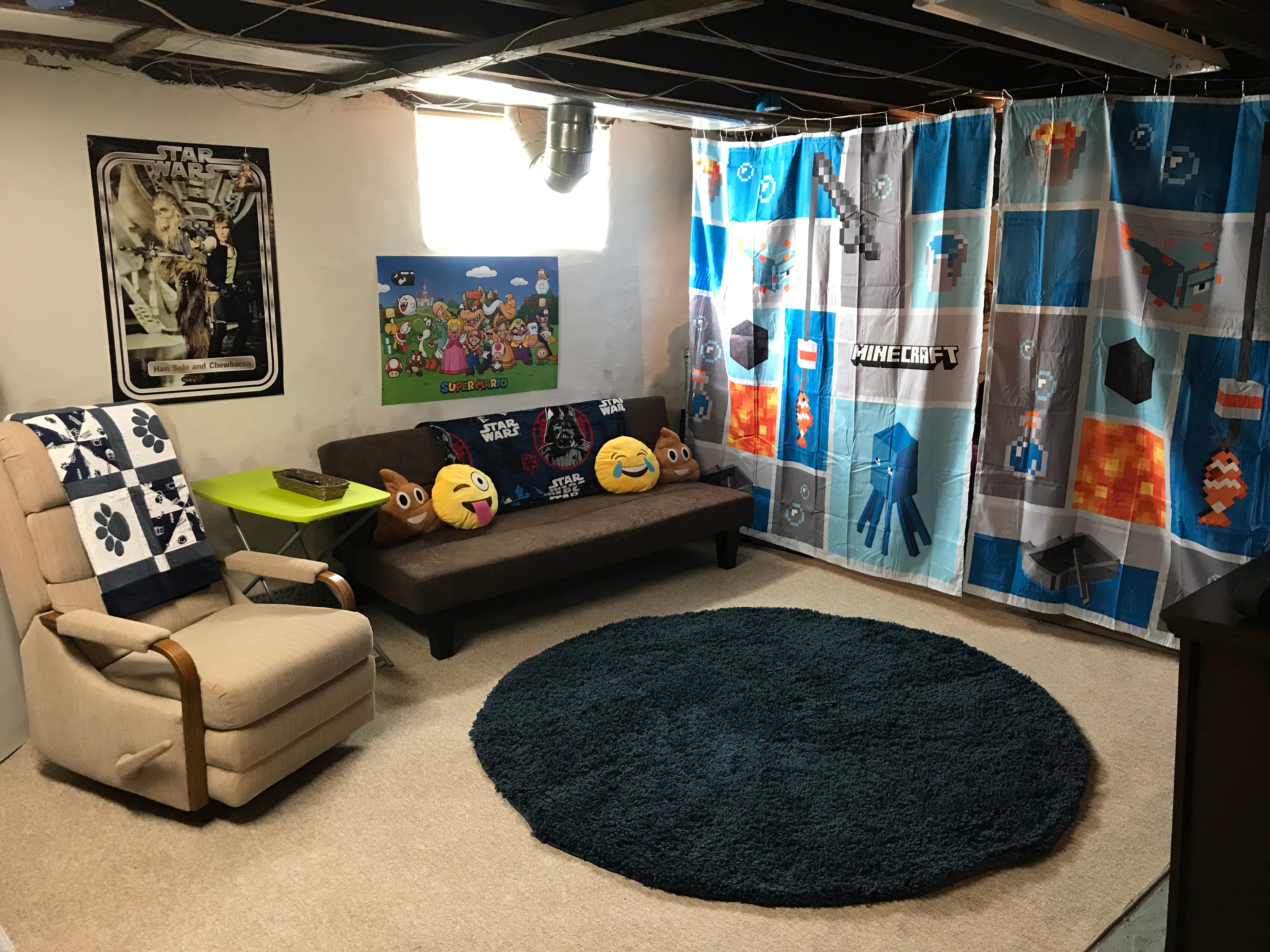 We strung some old cable across the wooden beams and hung two shower curtains to block off the other part of the basement. My biggest splurge was this shag rug, which is so fluffy and wonderful that it was worth every penny. The main rug in the basement is pretty thin and lays over a concrete floor, so something more plush was key.

But my favourite item — and the one that earned me the most admiration from my son — was this huge, and strangely lifelike, cardboard cutout of two stormtroopers: 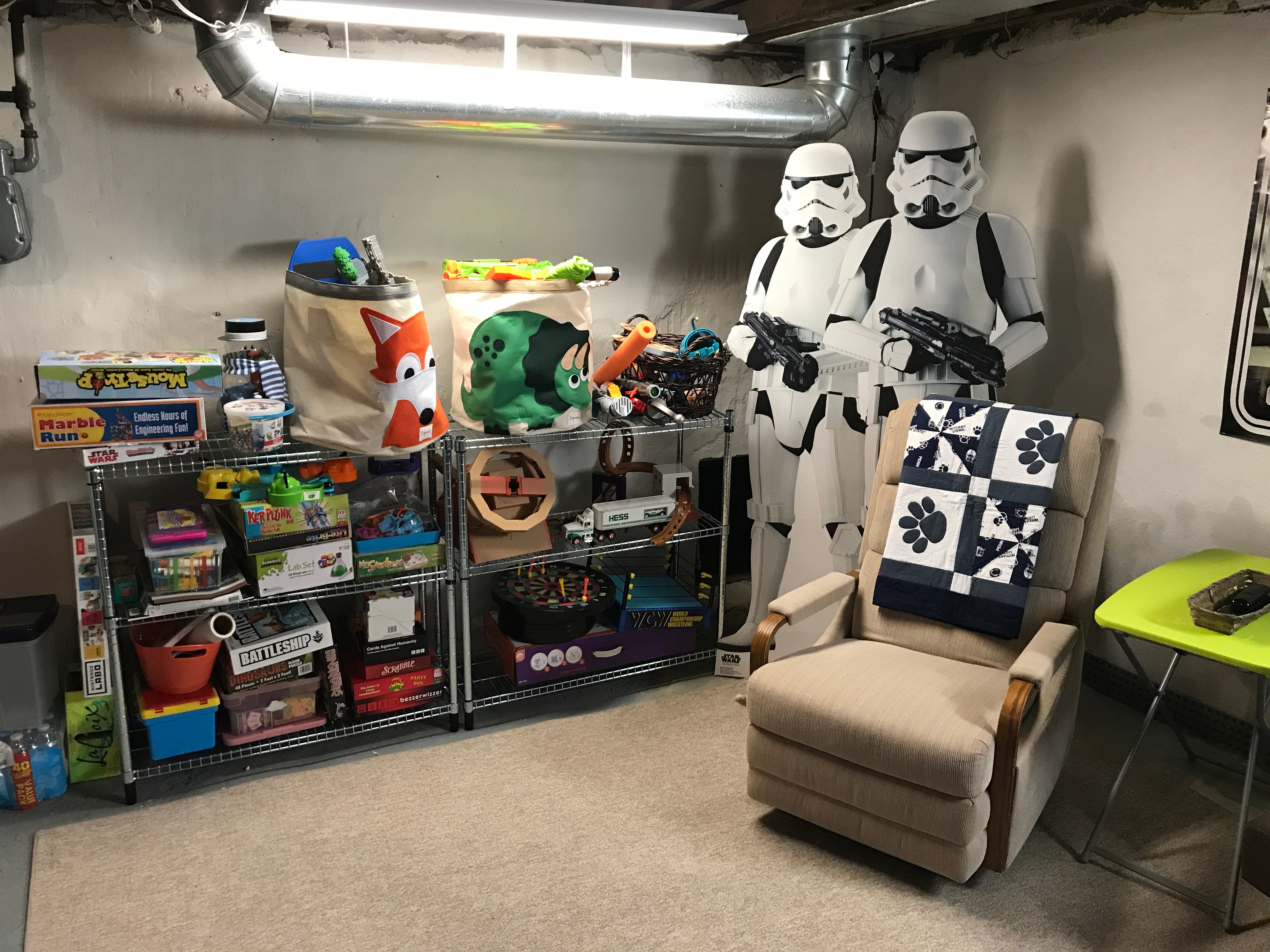 They’re useful (they guard the sump pump), they’re impressively tall, and for the first week or two after I bought them, I’d gasp a little every time I turned toward them with a load of laundry in my arms.

Then we put the old TV on a dresser we’re no longer using, which is also the perfect place to store his video games: 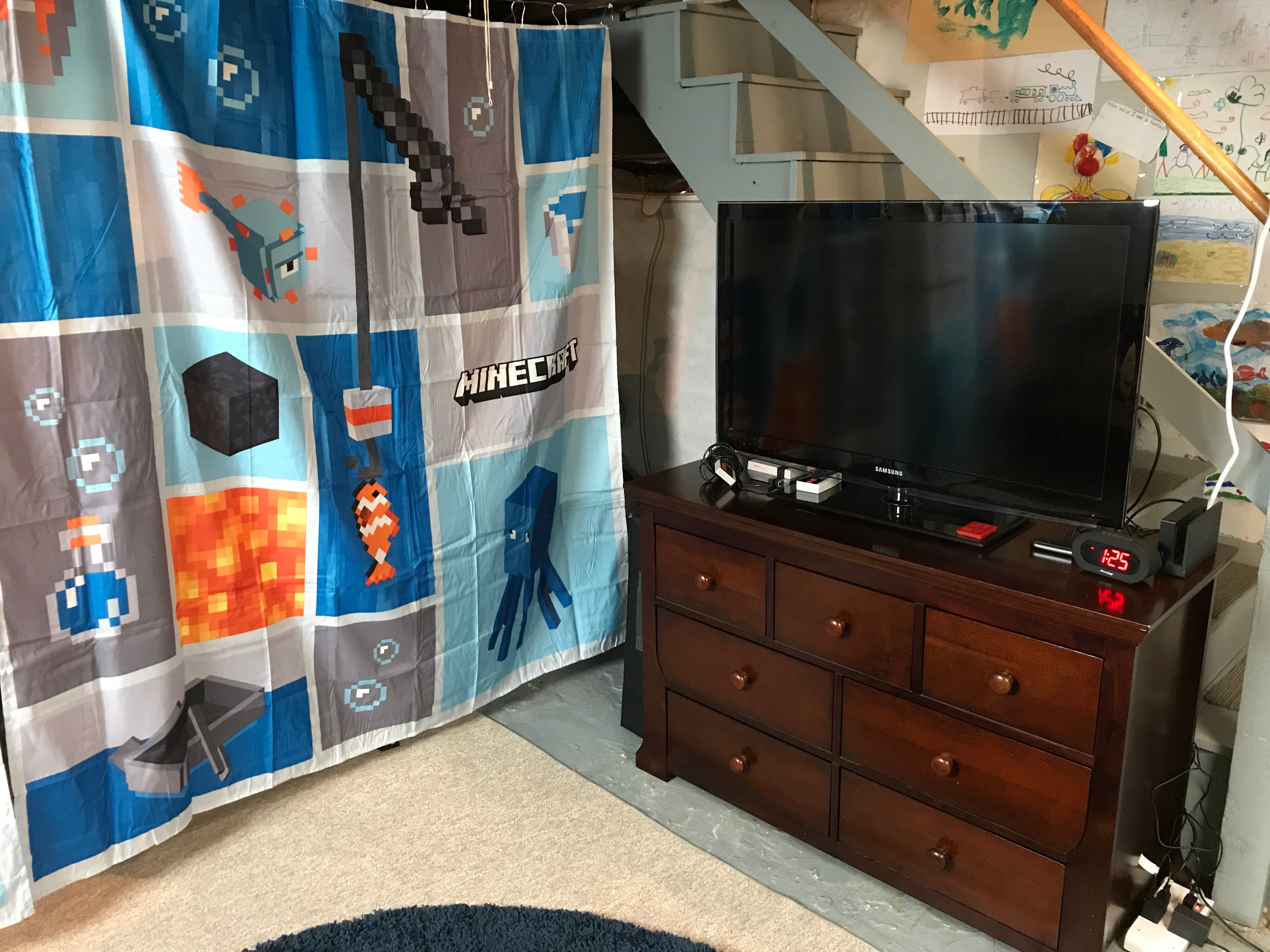 The finishing touch? A couple of blankets and emoji pillows: 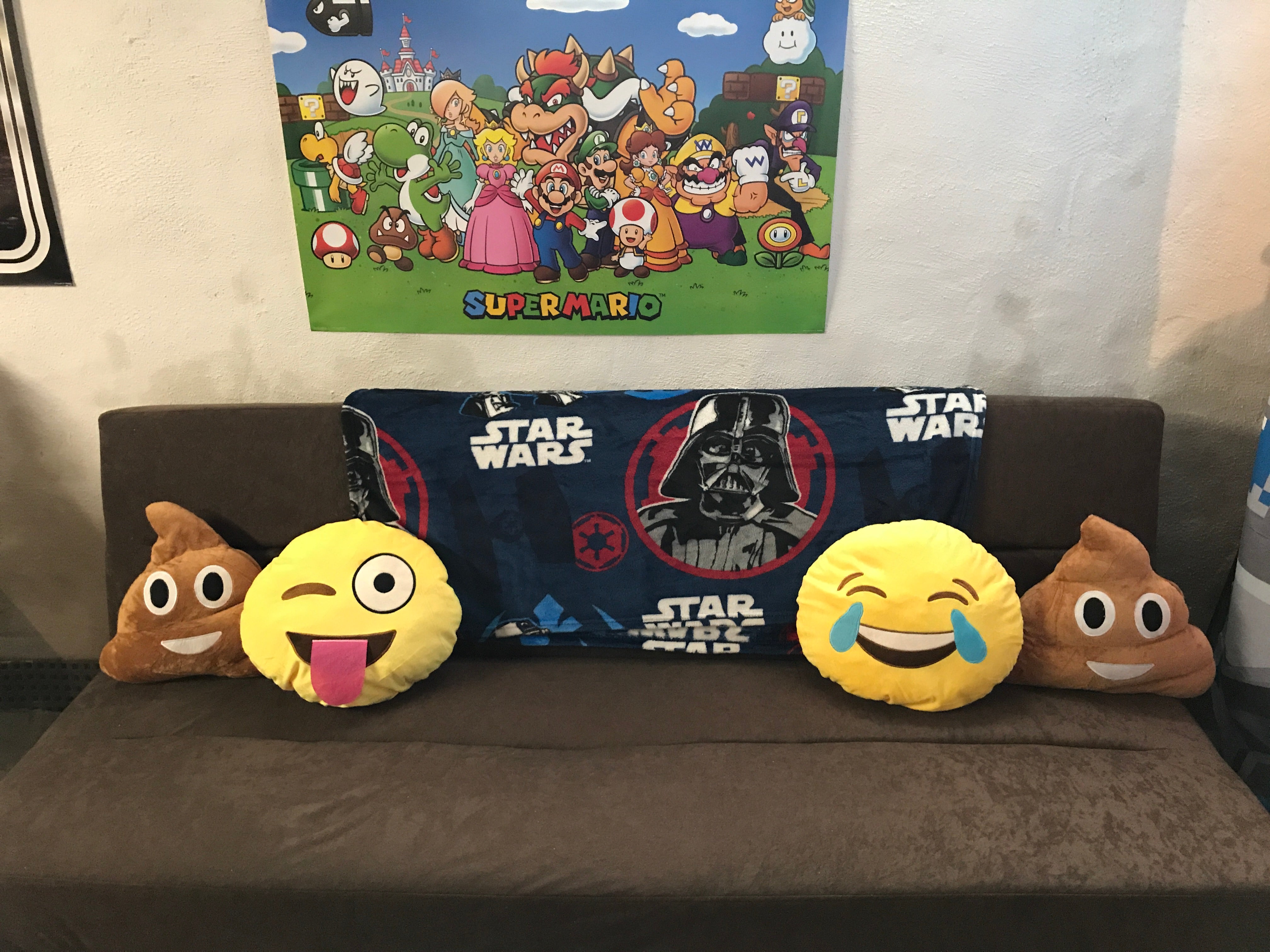 The poop emoji pillows, in particular, were worth every penny because every time my son has a new friend over to play and leads them downstairs, he says, “Just to warn you: I pooped on the couch. Twice.”

My son now has a fun hang-out space for his friends, they’re close enough for us to hear that they are (mostly) behaving, and we get to reclaim the living room and watch the new TV.

Here’s everything I purchased for the Kid Cave: