Could Eating This Salad Help Save The Earth?

Eating is complicated. Not only is food comprised of complex chemical systems that affect our bodies in all sorts of ways (both good and bad), but once you start thinking about animal welfare, farming practices, and water use, it can be downright overwhelming to try to eat “like a good person.”

But that doesn’t mean our good friend Brian Kahn (of Earther) isn’t going to try his hardest.

As you may have seen last week, Brian is embarking on quest to eat according to the recommendations of a recent report put out by the EAT-Lancet Commission which “lays out how we may have to change our diets to accommodate another 2.5 billion souls and a hotter Earth.”

He has asked me to help him with a few recipes, which I am happy to do, mainly because Brian is a very chill dude not prone to moralizing, and he has already acknowledged some of the diet’s shortcomings.

(Also this challenge makes me feel like I’m on a Captain Planet-judged episode of Chopped, which I am into.) 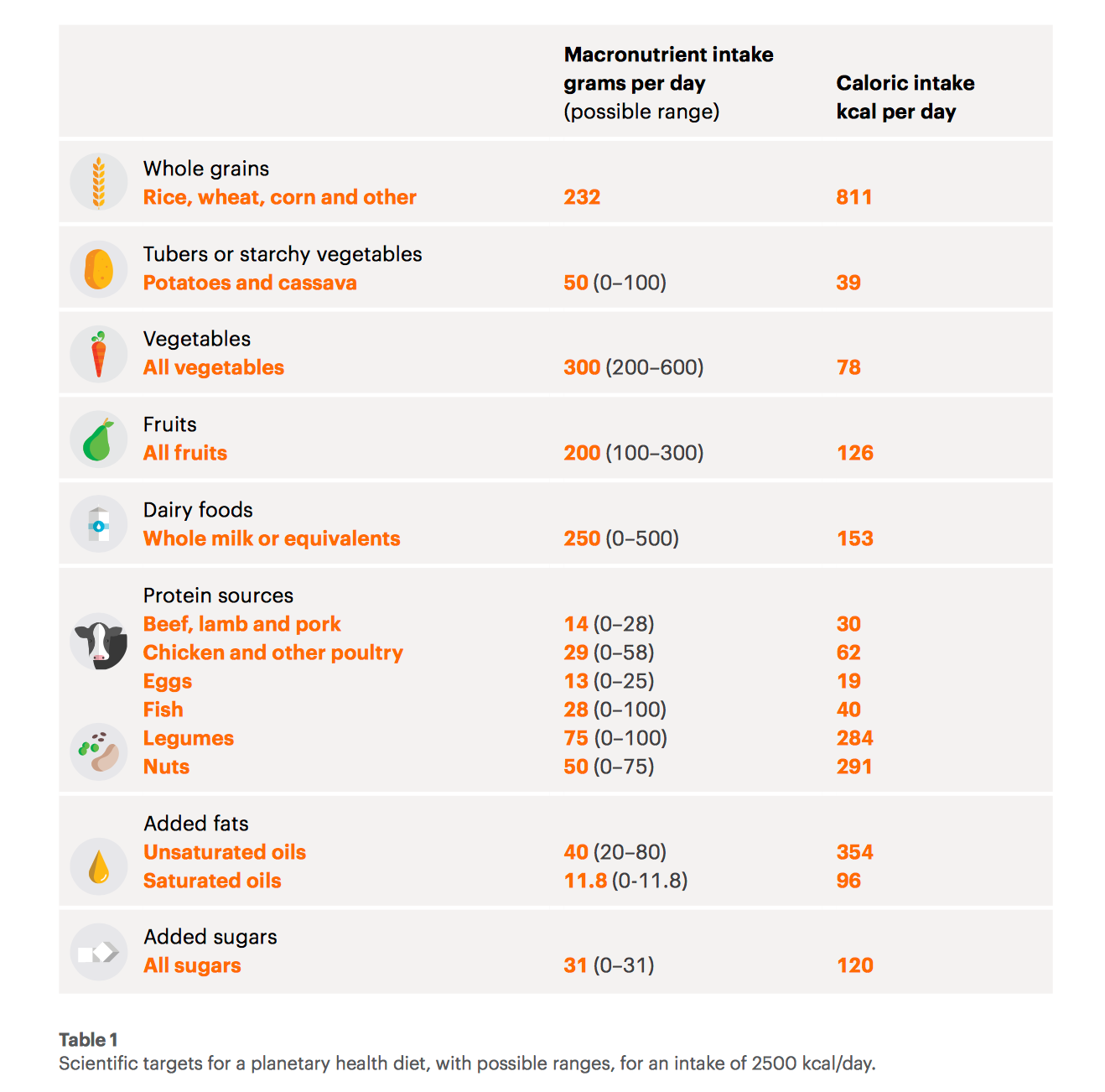 This is what we’re working with. (Screenshot: eatforum.org)

This will shock no one, but I have never been a fan of diets. Though I recognise that eating within a certain set of restrictions works for some people, it does not work for me, and I think diet culture—i.e., the idea that people (usually women) should eat for the purpose of making parts of their body disappear — is a bad, bad thing.

But eating for your health, or eating for the health of the planet we live on, is something very different, and I was interested to see if I could develop recipes within the parameters of this plan that Brian could actually enjoy. For his first Skillet-approved meal, I made a lentil salad he could make ahead of time and take to work, as eating at work can be a major challenge when executing any type of meal plan.

Unsurprisingly, this kind of recipe development was a little more challenging than my usual fare. Not only was there much more maths involved — the EAT-Lancet “diet” is laid out in grams — but there was a distinct lack of fat, which is offensive to my whole sensibility.

It is not, however, impossible, and I’m pretty happy with the salad I came up with, with features lentils, marinated cherry tomatoes, mushrooms, and even a little bit of pancetta and goat feta. To eat along with Brian, you will need:

First make the dressing. Peel the garlic by smashing the cloves, then give it a rough chop and sprinkle kosher salt on top of each clove, continuing to chop and smash the garlic with the blade of your knife until you have a chunky paste. Scrape it into a mason jar (or another jar with a lid), and add the remaining ingredients.

Shake to emulsify, then set the jar aside to let the flavours meld while you make the rest of the salad. (For those counting grams at home, each tablespoon of this dressing has: 7.4 grams of oil, 3 grams of fruit, 1.6 grams of vegetables, 2.7 grams of mustard (which you would count as sugar, I guess?), and 1.3 grams of maple sugar.)

For the tomatoes, you have two options — you can either slice them in half and toss them in at the end, or you can take a little extra time and peel them, letting them marinate in the dressing for extra flavour.

Peeling the tomatoes is actually quite easy. On the butt of each tomato (opposite of the stem sign), make a tiny “x” with a very sharp knife, taking care not to cut too far into the fruit. Bring a pot of water to boil and blanch the tomatoes in the boiling water just long enough so the skin starts to peel back — about five seconds — then plunge them into an ice bath to stop the cooking.

Once they are chilled, gently remove the skins and place the peeled tomatoes in a bowl. Toss the tomatoes with a tablespoon of the dressing, and season with a little salt and pepper. Cover and set aside.

Starting with a cold, nonstick pan (nonstick is important so you don’t have to add more oil), cook the pancetta over medium heat until the fat is rendered out and the pancetta is crisp. Remove the pancetta with a slotted spoon, leaving the fat behind, then raise the heat to medium. Cook the mushrooms in the pancetta fat until they have released most of their moisture and are crispy.

Combine the lentils, pancetta, mushrooms, cheese, and shallot with another tablespoon of dressing then spoon the tomatoes on top. If you want to bulk it up with more veggies, serve it on a bed of greens, depending on how much you have left in your veggie budget for the day.

I also recommend at least one more tablespoon of dressing if you have the room, but seasoning with flaky salt also goes a long way if you’ve used up your fat allotment on another meal. This salad can be made a night or two before you plan to eat it — in fact, this is one of those meals that gets better with a little melding.