Organise Your Thoughts With This Markdown Note-Taking App

markdownnotesorganizeto-dowindows
Facebook may have decided that you shouldn’t see the news, but we think you deserve to be in the know with Lifehacker Australia’s content. To sign up for our daily newsletter covering the latest news, hacks and reviews, head HERE. For a running feed of all our stories, follow us on Twitter HERE. Or you can bookmark the Lifehacker Australia homepage to visit whenever you need a fix.

Windows / Mac: I confess, I’m not as well-versed in Markdown as I should be, but the awesome, free note-taking app Notable makes me want to learn its intricacies. The app, available for both Windows and Mac, is a full-fledged note-taking experience that’s leagues better than any default apps you’ll ever find on your system.

You just have to learn Markdown to make the most of it, but that sounds a lot worse than it actually is.

From the moment you install it and fire it up, Notable is more than willing to hold your hand as you leap into the scary and unknown world of a new note-taking app. That might sound overly dramatic, but let’s be real: If you’ve spent years dumping your thoughts into something like Evernote, or your Mac’s Note’s app, you’re going to resist switching to something new. You should. Take the plunge.

I like a lot about Notable. First of all, it’s ingenious how its creator, Fabio Spampinato, gives you a tutorial for the app in the form of pre-populated notes. Not only are you learning how the app works when you read these instructions, but if you’re like me and you like to tinker, you can jump right in to the nuts and bolts of the notes he’s created to see how the app’s note-organisation features work—and Markdown. 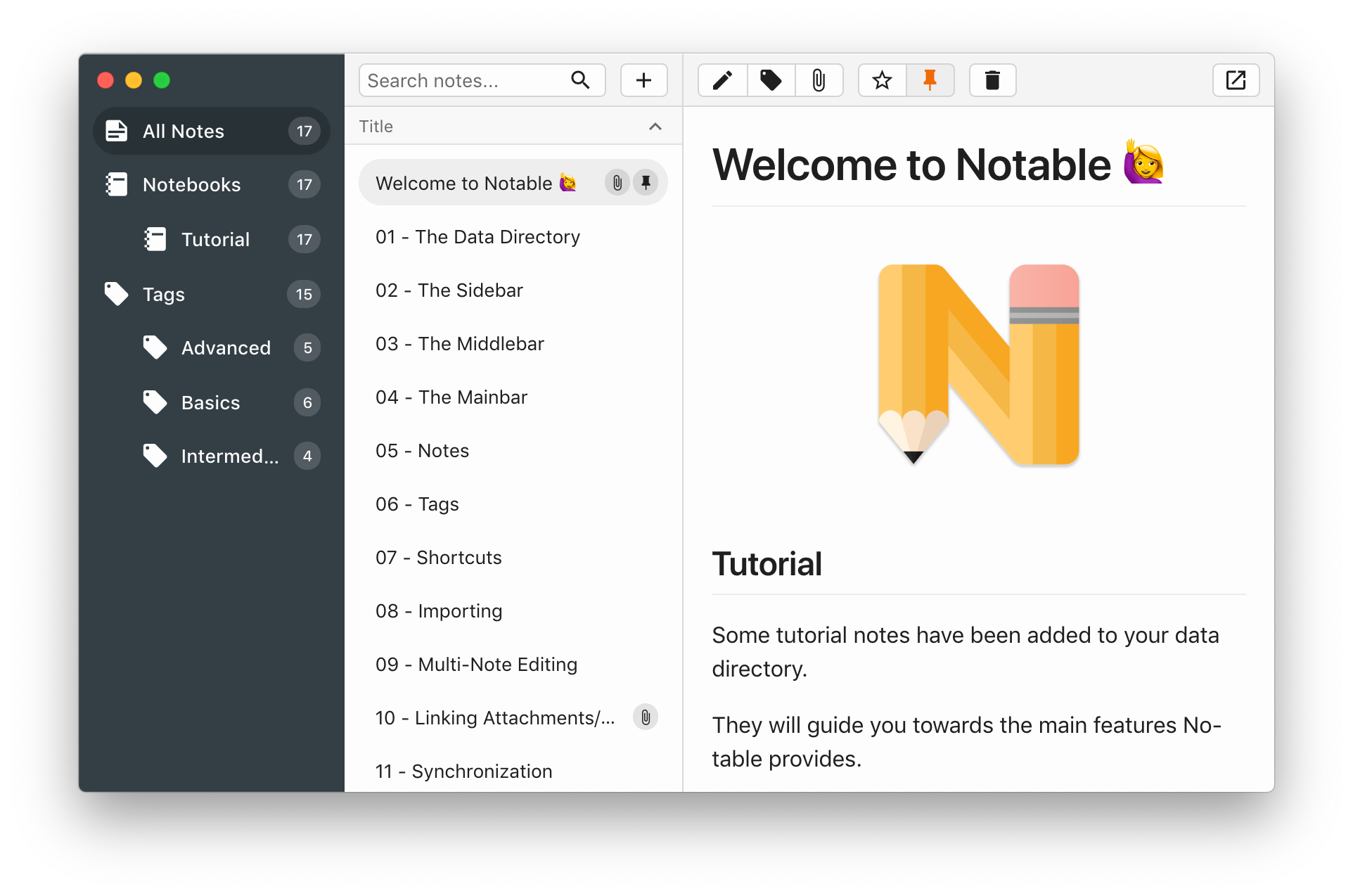 The notes you create all live within a single folder on your computer, which you designate when the program first starts. Any attachments you drop in a note live in another folder. While that sounds like chaos—on your hard drive, certainly — everything sorts itself out in Notable if you make use of the app’s many techniques for organising your notes.

For example, you can assign notes to an infinite number of notebooks, or themed collections of ideas that you want to keep in the same spot. You can also give a note as many individual tags as you want, a secondary method for organise their contents.

Finally, you can even mark notes as “favourites,” in case you need yet another way to find your gems, or pin important notes across all of your notebooks and tags so you don’t lose them. The app even comes with a built-in search tool, in case you need a little more help finding something.

As for the Markdown aspect, I found it easiest to learn the syntax of the language by saving all of Notable’s tutorial notes in a new notebook. You can then refer to them if you need a quick refresher about how to italicize text, build a list, or turn a phrase into a hyperlink. (You could also copy and paste one of the many Markdown cheatsheets on the web into a new note.)

However you wrap your brain around the code, you’ll find that Markdown is a quick and efficient way to format your many thoughts — much better than having to click on all sorts of toolbar buttons, at least.