As of two minutes ago, I have 17 different types of salt in my kitchen, including a Jacobsen sampler (which I am methodically working my way through) and a packet of THC-infused stuff (which I have not tried). I love all of my salty sons dearly, but the Diamond Crystal Kosher and flaky Maldon get far more use than anyone else—the DC is for cooking; Maldon is for finishing.

Some people claim that Maldon tastes “softer,” but its real draw is textural. Those flaky, crunchy crystals just feel good on the teeth. I would never claim to be capable of producing the perfect pyramids that Maldon puts out, but you actually can make your own fancy, flaky, beautiful salt crystals within the walls your kitchen, using either a slow cooker, or the slow cooker function on your Instant Pot.

Like ChefSteps before me, my method relies on making a super-saturated saline solution, then slowly evaporating the water. Unlike ChefSteps, I did not use a sous-vide setup, because our dear Heather does not have a sous-vide setup, and Heather is the one who brought the ChefSteps article to my attention, and asked if she could make the pretty crystals in her slow cooker. (Heather is my beautiful salt muse.)

Luckily for Heather, and for all of you, you definitely can use a slow cooker or Instant Pot to make fancy finishing salt. The ChefSteps recipe makes a ton—they use a whole kilogram of kosher salt—but I found that smaller batches give the crystals room to grow without crowding and clumping, so start with 100-200 grams. Also, because slow cookers and Instant Pots run a little hotter than the ChefSteps’ recommended temp, it’s possible you could grow larger crystals with a sous vide—as slower evaporation means larger crystals—but that also means you’ll spend less time waiting (around three hours compared to 12). Also, looking at the sous-vide salt photos, it doesn’t appear that it really made that big of a difference.

Anyway. To make your own flaky, salty friends, you will need:

Add the water and salt the the pot or Instant Pot insert and bring to a boil to dissolve. If you are using an Instant Pot, simply turn the “Sauté” function on “Less.” Once the salt has dissolved—and mine dissolved before it even got to a boil—remove it from the heat (if you’re using a pot) or press “Cancel” on your Instant Pot.

If you are using a slow cooker, go ahead and pour the saline into the insert. Turn it on, and set it to its lowest setting. If you are using the Instant Pot, press “Slow Cook” and make sure it is set on “Less.” Whether you are using a slow cooker or Instant Pot, leave the lid off, walk away, and resist the urge to stir, breathe on, or otherwise disturb the crystal growing process. After about an hour, you will start to see tiiiiny, adorable little pyramid shapes swirling around in the water. They will make you squeal with delight, for they are so cute and science is so magical. After a couple of hours, you will probably see a scene like this: 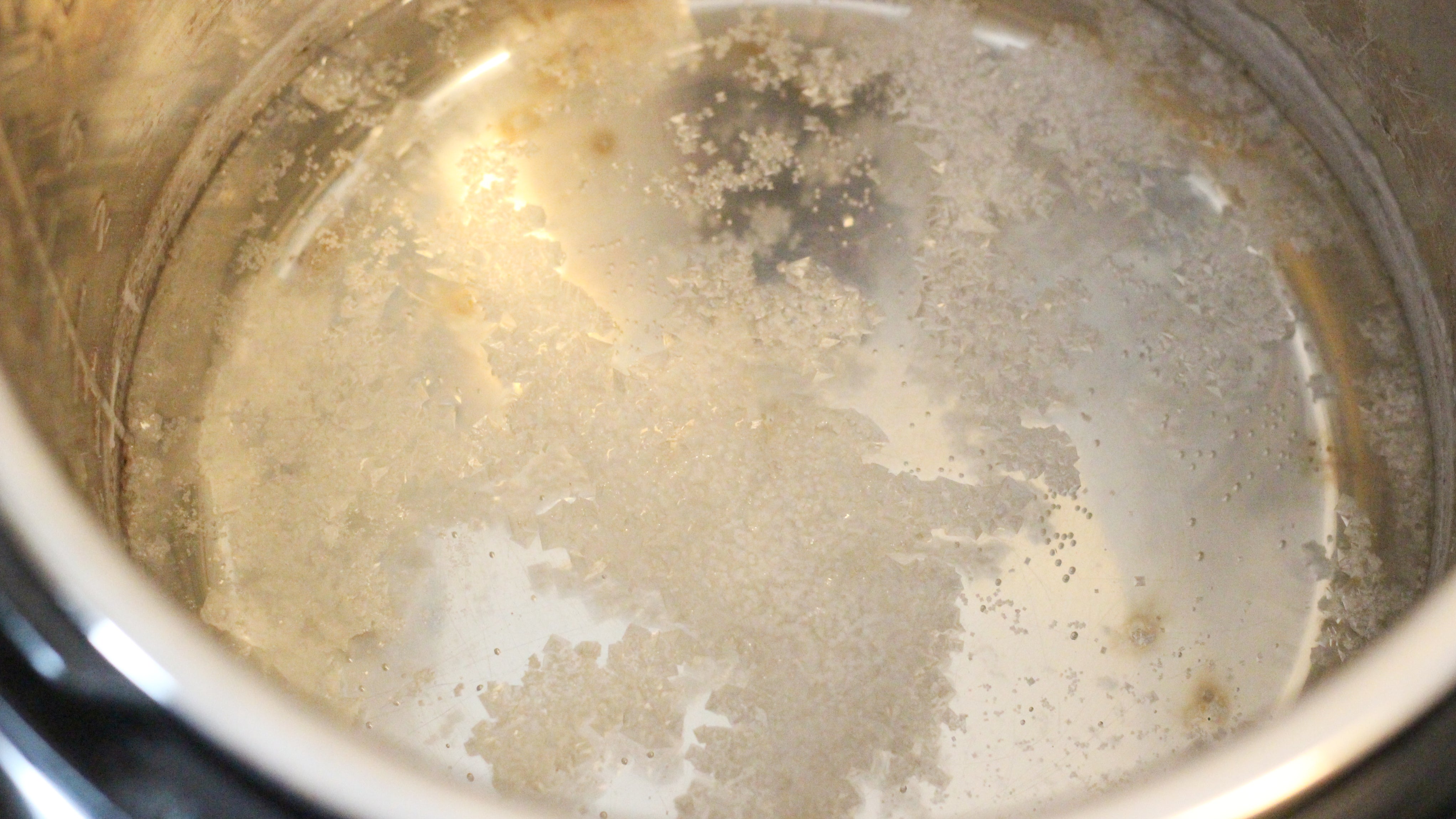 After three hours or so, you will have a pile of wet salt, which means it is time to carefully scoop out crystals, and let them dry on some paper towels. 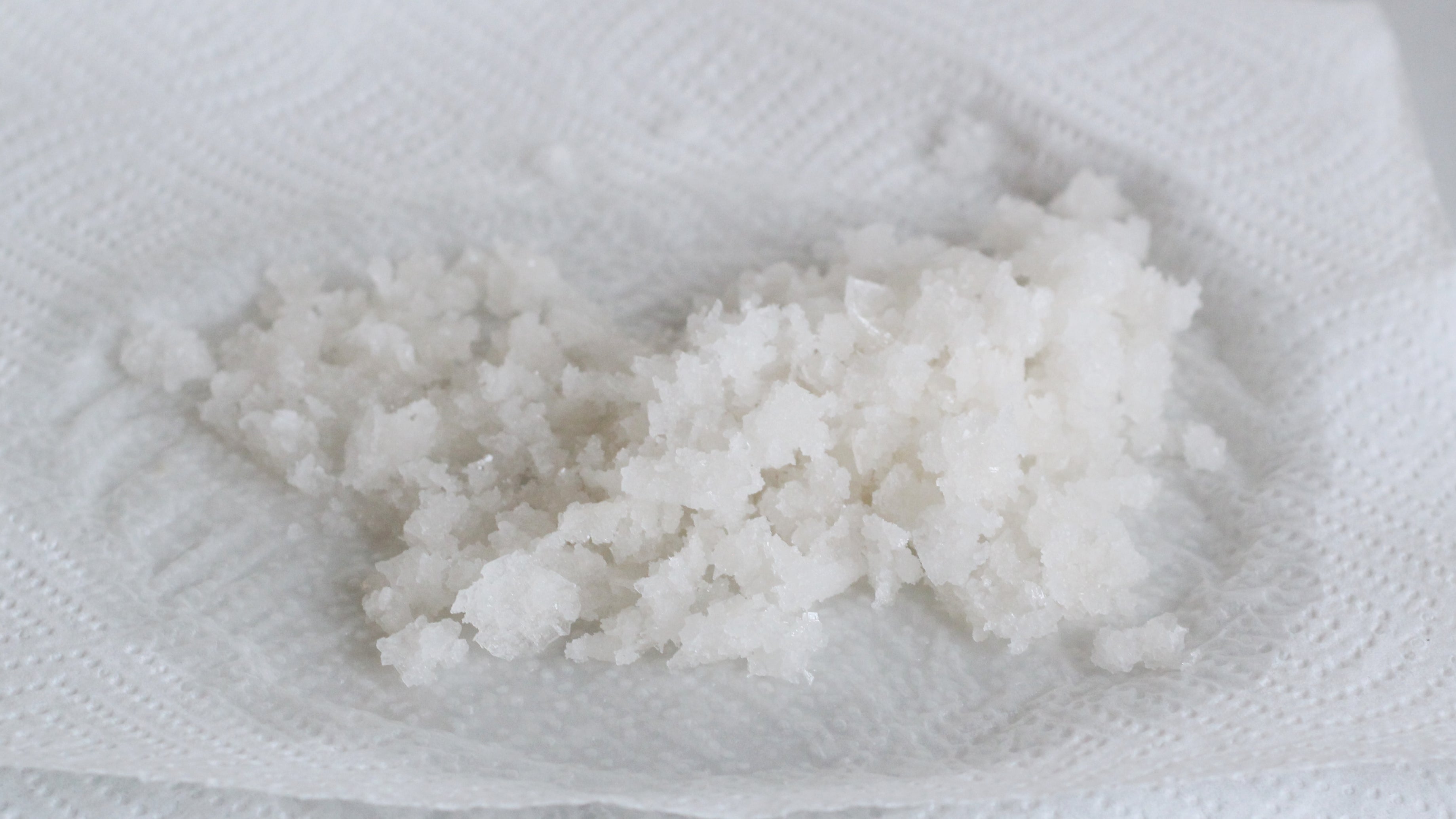 Let it dry, then put it on things. While putting it on things, make sure to brag to anyone within earshot about how you made these gorgeous crystals, and you will be treated as such, and then sit back and relax as the praise rolls in.