I’m ‘I Like To Make Stuff’ Host Bob Clagett, And This Is How I Work

He shows you how to build them too, on I Like to Make Stuff, a YouTube channel with with over 2.1 million subscribers and a blog with detailed instructions and plans.

We talked to him about his favourite workshop tool, the app where he plans all his projects, and working with his family.

I went to college at an art school for computer art but taught myself programming on the side. I started a web development firm after school and was in the software industry for 15 years before starting a YouTube channel showing how I made DIY projects. In less than two years, I quit software dev and started working on “I Like To Make Stuff” full time. 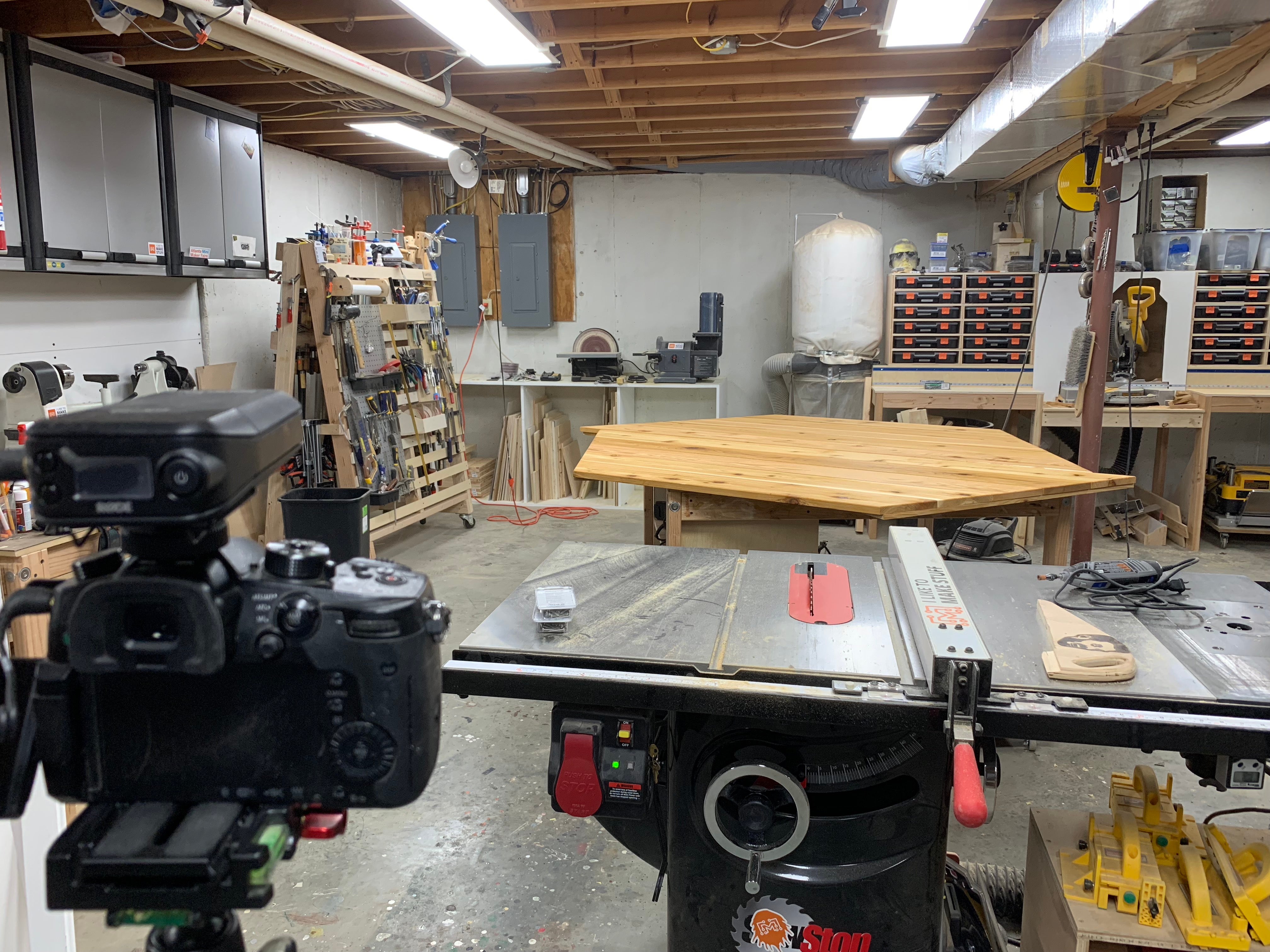 I try my best to avoid sitting down at the computer throughout the day, but my day usually starts with a quick batch of email replies (I get a little further behind every day). After that I try to get right in the shop and start working on a project. Sometimes that means design, planning, prep or actually filming. Often it means all of those at once.

One of my favourite things about my job is that I rarely have the same day twice. I build stuff and film while solving problems along the way. Some days I record podcasts or do voiceover for videos. Some days I livestream what I’m working on. It’s really always pretty different, and I love that!

I use lots of tools in my shop but the thing that gets used most is probably my multitool. It’s a Gerber Crucial and is a perfect fit for my needs.

As far as apps, I run the majority of the business on a free app called AirTable. It’s fantastic and makes organisation (especially with a small team) so much easier. I also really love using IFTTT to connect all of the different services I use. It makes each one of them feel more useful because they all work together and trade off information. Well, I have a couple. The shop is broken up into a woodworking and metalworking area, but there’s lots of space now and almost everything is mobile. The tools often get moved to where they’re needed. The whole shop is kind of a work in progress.

My office is a combination of 3-D printing/finishing station, electronics workspace and overall control center. We’ve also got an entire whiteboard wall that we use daily to sketch and brainstorm ideas.

My entire space is fairly new to me so I think it’ll continue to evolve and shift constantly the longer I use it.

I use the IFTTT app on my phone to record potential project ideas. When it opens there’s a big text field and a single button. I type an idea or keyword, hit the button and close the app. Behind the scenes, that text is pushed to my AirTable project ideas list and tagged as “incoming” so that I know it has to be revisited later to see if it’s actually a good idea or not.

The process of capturing those ideas is so simple now that I have no excuse NOT to do it and that means that I don’t lose ideas but I also don’t have to remember them.

Our editing process has gotten far more complicated since my family moved states last year, away from the editor. We shoot all of the video for a single project, then my camera man combs through it to delete the unusable pieces.

After that he imports it all into Final Cut Pro X and creates proxy files (lower resolution versions of everything). It takes several hours for them to render from 4K to 720p then they get zipped into a single file and moved to my local server.

My editor logs into the server via FTP and downloads the proxy footage (still usually 20+GB). The editor then does the entire edit, music and colour grading for the video. After it’s finished, he uploads just the Final Cut Pro project file to the server. I download his file, then tell Final Cut Pro where the high-res files are, and re-render the edit in full resolution.

In contrast, the editor used to just come over to my house once a week and edit for a couple of hours 🙂

Well, of course I rely on my awesome wife in many, many ways. She’s super-supportive and does a huge amount of work keeping our family of six running while I work building the business.

Josh is a full-time employee who runs camera for the videos and produces a lot of the social media content around video releases, manages the online store and fulfillment and often does a lot of prototyping and CAD to get projects moving along faster.

What’s it like to work with and around your family? What are the biggest upsides and downsides?

For me personally, it’s awesome to work at home because we have a pretty strict rule about access to me during my work day. Of course, I stop anything if my wife or kids need me, but they know that I’m unavailable during the normal work day for little things.

I try really hard to keep semi-normal work hours, and keep those times really focused on work, so that I feel productive.

I found that if I feel like I’ve been productive, it’s easier for me to turn off work mode at the end of the day. I want to be 100% present with my family when I’m with them. I try hard to keep work time for work, and family time for family.

The challenges for working from home are mostly around trying to keep on task. For instance, I’ll look around the house while working, and see some home improvement that needs to get done. I have to fight the urge to stop making a video and go do that task. Luckily, my shop and office are in the basement, so it kind of keeps me in my own space for most of the work day.

I’ll look around the house while working, and see some home improvement that needs to get done. I have to fight the urge to stop making a video and go do that task.﻿

Like I mentioned before, AirTable is the tool we rely on the most right now. It’s essentially a relational database that looks like a web-based spreadsheet. I use it for scheduling, to-do lists and tasks, sponsor/ad data tracking and so much more. We also communicate through Slack most often. It’s very handy and integrates with most organisation tools as well. I just built a ping pong table, so that gets a lot of use these days as a way to take a break. At a bigger scale, I honestly have been working so hard since I started doing this full time that I haven’t given myself enough time to recharge, but that’s been something I’m working on changing.

I recently took a trip with my wife away from everything and intentionally tried not to think about work for a week. It was WAY more helpful than I imagined it would be. Sometimes, we just need to step away for a little bit. Also, ping pong and building Lego sets are a great way to shift mental gears.

Ha! Side project? That’s like someone asking about my favourite hobby :). My whole career used to be the side project and now it’s basically the only project. I truly have the coolest job in the world and I’m in a place where I can constantly pivot any part of it to include my interests. Everything I like can potentially become part of the work in the best way possible!

I recommend reading The War of Art, C. S. Lewis and Calvin and Hobbes. All of them capture a different part of the stuff that makes us tick (in my mind). My friend Jimmy Diresta says “What if everything goes right?” We tend to assume that out of all of the bad things that COULD happen, the worst case is the most probable. It’s just as probable that everything could go right, so why not use that as the default? Imagine how good things can be, it’s way more encouraging.

I do realise the irony of that issue, given the advice I mentioned above. It’s tough to look at a business or process that is working well, going in the right direction and decide to change something that could potentially have a negative effect. I’m currently navigating that and trying to figure it out.