I’m a big fan of routines — digital routines, that is, because they’re a convenient way to launch a series of actions without having to set everything up manually each time you want to do something.

Consider one of my favourite activities, the “nap.” Instead of having to get up, turn off my lights, put on some soothing music (or thunderstorm sounds) to block out the outside world, and turn on my room’s fan, I can just yell a command at my Amazon Echo or Google Home and it does that all for me. Ta-da.

Thanks to a recent tweet from CNET’s Ry Crist, I learned that Amazon now supports wait times in its routines. In other words, you can insert a big chunk of time between your actions, which allows you to get even more creative with the routines you set up. It’s a nap enthusiast’s dream.

How to set up delayed actions in your Alexa routines

To continue that sleeping example, setting up a new nap routine on your Echo device is incredibly easy. Pull up the Alexa app on your smartphone (not Alexa’s web interface, alas), tap on the three-line “hamburger” icon in the upper-left corner to pull up the sidebar, tap Routines, and tap the plus icon in the upper-right corner to create something new.

Building a routine is a pretty straightforward process: Create a trigger — a voice command or a scheduled time, for example — and add all the actions your Echo device should perform in sequential order, like turning off your bedroom lights when you want to get some shut-eye.

Routines has finally made its way to Google Assistant devices in Australia. As the name implies, these provide guidance and help with a range of daily routines - from scheduling morning and bedtime to preparing you for work commutes. There are six ready-made routines to choose from, plus endless customisation options. Here are the details!

Alexa’s new “Wait” action is great, because you can now give yourself a built-in timer for a nap. For example, you can create a routine that immediately turns off all the lights in your room and fires up a sleepytime playlist for a few minutes to help you drift off to sleep. Then, you can add a “Wait” action for the amount of time you typically nap — let’s say, thirty minutes — and add another action after that, like starting your favourite wake-up song, turning on your lights, or having your Echo just say, “Hey, wake up.” If you typically nap for set lengths, or want to stick to that habit, it’s a lot easier to create a routine like this instead of setting up a smartphone timer each time you’re about to temporarily turn in. 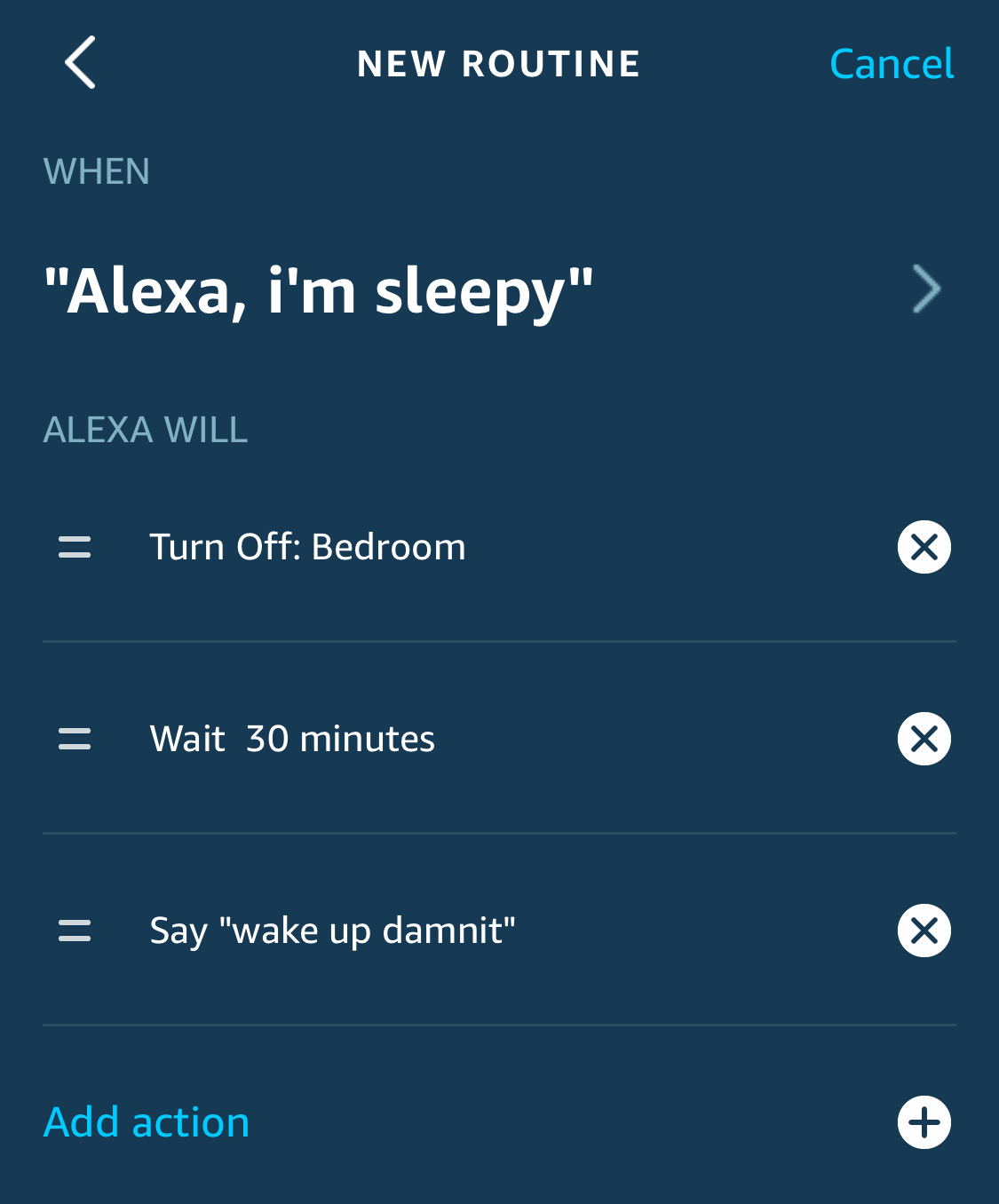 I might adjust that to 120 minutes instead of 30. (Screenshot: David Murphy)

As for what other routines might benefit from a delay, I’ll leave that to your creativity. I will probably separate out my standard morning routine so I get the weather as soon as I wake up, but receive the morning news 30 minutes later when I’m less groggy. If only routines supported whisper mode, though; I could really freak out my roommates with some delayed Alexa phrases.