The Right Way to Freeze Milk and Heavy Cream

I’m not exactly the most tech-savvy parent, so when I was offered a Nintendo Labo Vehicle Kit to check out, I was at first like, “Wait, what’s a Labo?” Luckily, my son, Ryan, who had just received a much-coveted Nintendo Switch for his 8th birthday, was like, “It’s where you build really cool stuff and then you can play it on TV!”

Labo kits come with a cartridge, a small bag of assorted materials and a stack of cardboard sheets with pre-cut pieces that are popped out, folded and constructed into objects with the help of easy-to-follow, on-screen instructions. Once constructed, the two “Joy-Cons” on the Switch’s controller slide into the objects so that when you move them — to push the pedal down with your foot, for example — the game registers the movement of the Joy-Con and knows you’re hitting the accelerator.

With the vehicle kit, we were able to build a pedal, a car steering wheel, a submarine control panel, an aeroplane joystick and a spray can to customise all of our vehicles. Ryan needed a little help and supervision on the more complicated parts of the construction, but overall, he was able to do most of it himself (while I helpfully fast-forwarded through directions by holding “A” on the controller, which was not too complicated for me to manage).

After making the pedal, which is used for all the vehicles, we decided to construct the main items — a car, a submarine and an aeroplane — in reverse order. In hindsight, I can see why it’s suggested to make the car first; the car’s games are the most fun and most involved. But it’s also the most complicated to build. We wanted to start off easy and get to playing, so we first built the aeroplane, which only took us about 45 minutes (compared to the car, which took about two hours).

Can The Nintendo Labo Turn Your Kid Into A Maker?

The building process itself was strangely satisfying. It was reminiscent of constructing a LEGO set, if LEGO were much larger and made of cardboard and played a catchy tune in the background while you worked.

Here’s what I liked about Labo

It was such a fun activity for us to do together. The on-screen directions even suggested now and then that we stop to take a break or have a snack, and we decided that was excellent advice and a good excuse to share some graham crackers. Ryan said this aloud to himself at one point: “This is so fun! I’m building stuff with my mum!” (That is a direct quote. He’s a sentimental kid.)

It’s perfect for a rainy day

Or, better yet, a snow day. It’s the sort of thing I’d love to buy and stash away for a day when you need a good compromise between what your kids want (to be on screens all day) and what you want (for them to use their brains in some way).

Kids can see, firsthand, how a machine works

Particularly with the car, which has a wheel and lever-system, it’s really cool for kids to see the inner workings as it comes together. We talked about how when we use machines (like phones or computers), we press buttons and things happen on the inside but we never get to see what it looks like or how it works. With Labo, we can see exactly how things are pulling and moving on the inside before it’s all closed off forever. 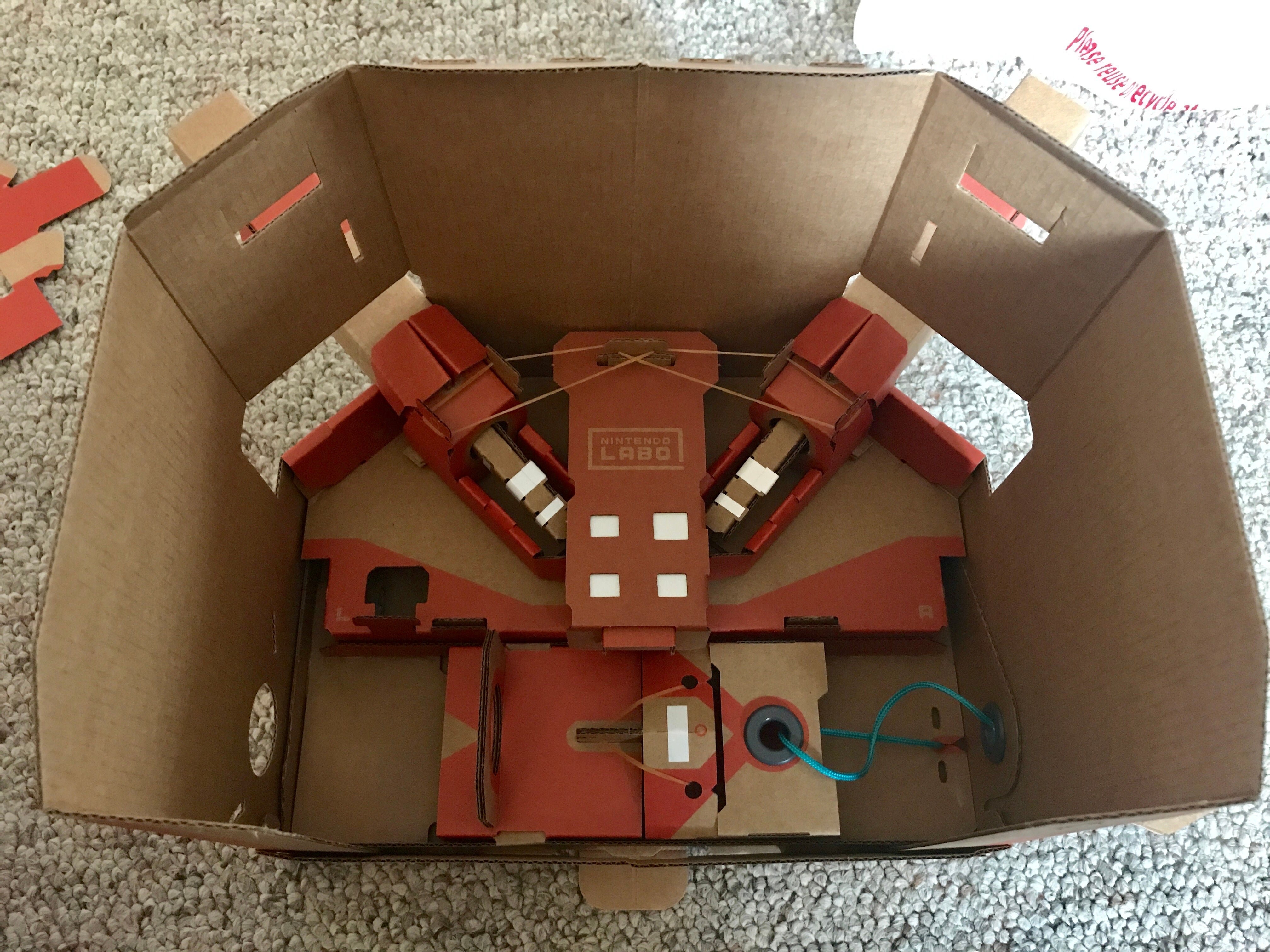 At the end, we put together a little “spray can” that you can use to paint your vehicles with different colours and patterns. Ryan said this was his favourite part of the whole process because, and I quote, “I got to fancy up my car.”

(As an aside: They even instruct you to put little round pieces inside the can that rattle when you shake it so it actually SOUNDS like a real spray can. I’ve decided that whoever designed these kits has the coolest job on the planet.)

The cardboard really is sturdy

If you’re anything like me, you’re thinking, “a cardboard pedal will last exactly 30 seconds with my child.” It’s thicker and sturdier than you’d think, though, and we expect it to hold up pretty well.

This is a bonus for me because Mario Kart is my favourite Nintendo game, but I’m not exactly the best driver. The steering wheel is going to take my game to the next level. (The Nintendo was for Ryan, I promise.)

The first question you might have about Labo is: What's so special about a box of cardboard and some mini-games? And the first thing to understand about Labo is that what's actually in the box is only part of the appeal.

What I Didn’t Love About Labo

Only one thing: Once constructed, the pieces are really big. I’m not sure where to store all of this now. I found a vehicle storage case on Amazon, but it’s $120, so that’s not happening. So, for now, some pieces are stashed away in a large end table and some are sitting on different surfaces in my dining room.

Ultimately, we do have plans to create a little “kid cave” area in the basement for Ryan, and the Switch and all its accessories will go down there, so it’s not a huge deal. But you might want to think through what you’ve got space for before you start buying all the kits. (There are all kinds of stuff you can make with different kits, including a guitar, a piano, robots, a fishing pole and an arcade console.)

That said, the good certainly outweighed the temporary clutter. And I’m feeling slightly more tech-savvy than I did before this whole thing started.

You can buy the Nintendo Labo Vehicle Kit for $88 here.