Make Every Component Of This Croquembouche In The Microwave

Holiday entertaining is all about wringing maximum impact from minimal effort. It’s pretty hard to beat a towering pile of caramel-drizzled profiteroles for drama alone, but the mighty croquembouche isn’t a low-effort joint — unless you use your microwave.

Microwave ovens get a lot of love around here, so long as the results are legitimately good—not fine, not passable, and certainly not “hey, this isn’t awful!” They need to work as well or better than traditional preparations, and I’m thrilled to tell you that a microwave croquembouche ticks every single box. Each component comes together twice as fast as it would on the stove and turns out perfectly every time. Best of all, with the exception of the caramel, every bit of it can be made ahead of time.

If, for some reason, an ostentatious tower of pastries isn’t your jam, pick and choose the parts that are. Use the choux for gougères or éclairs; stir heavy cream and (salted!) butter into the still-hot caramel for incredible homemade caramel sauce; eat the pastry cream with a spoon for all I care. The quantities listed below made a mighty ‘bouche for two, but should you want to go bigger, double or triple everything. 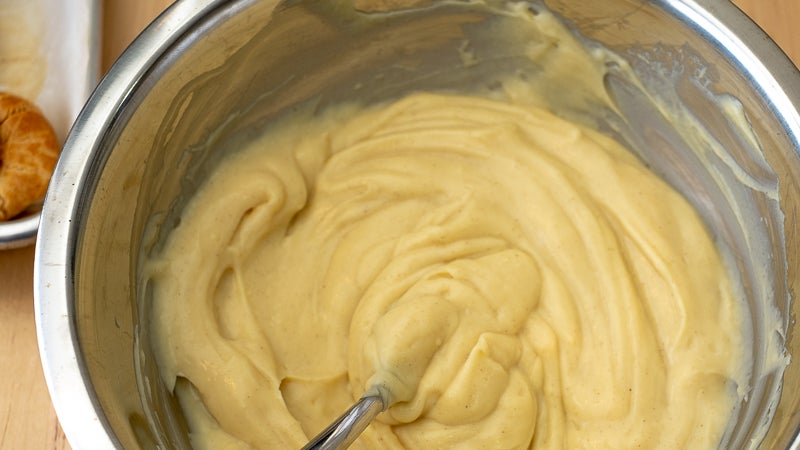 I desperately wanted my usual “blitz everything up and zap it til it’s thick” technique to work here, but it wasn’t meant to be. Pastry cream is a custard, but unlike your citrus curds and your sweet potato pies, starch is the primary stabilizer; the eggs are just there for richness. Starches adamantly resist dissolving evenly in most solutions, so you have to forcibly mash them up with something fatty before adding any liquid. This ensures that every starch particle is coated with fat as it swells, which keeps the mixture from going all lumpy. (Imagine a sauce thickened with a roux or beurre manié, then imagine one thickened with a scoop of raw flour. It’s the same principle.)

Common Custard Pie Mistakes And How To Avoid Them

Baked custards are everywhere on the holiday dessert table. Apart from apple pie, just about every other holiday classic calls for baking a sugar-and-egg slurry until perfectly set. It seems simple enough, but custard pies are notoriously tricky — especially when canned pumpkin gets involved.

All of this is to say that you can’t skip tempering when making microwave pastry cream. It’s an extra step, but it’s actually faster than heating an all-in-one slurry—and, more importantly, the results are flawless.

I use Martha Stewart’s pastry cream recipe, and so should you. Here’s what you need:

Stir the milk and half the sugar together in a large, microwave-safe container. Microwave on high power in one-minute intervals until barely boiling; this took between four and five minutes in my microwave. Meanwhile, use a fork to beat the egg yolks, cornstarch, and remaining sugar together in a medium, easy-pour container. (I used a soup container.) 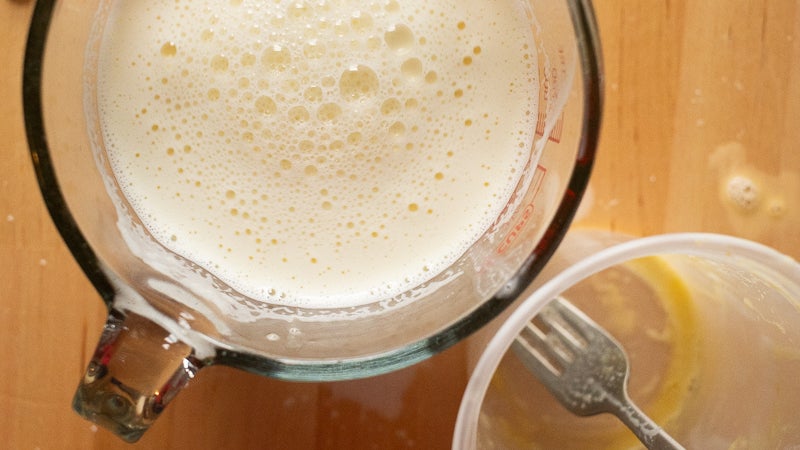 Scald the milk, temper the eggs, and scrape everything back together. 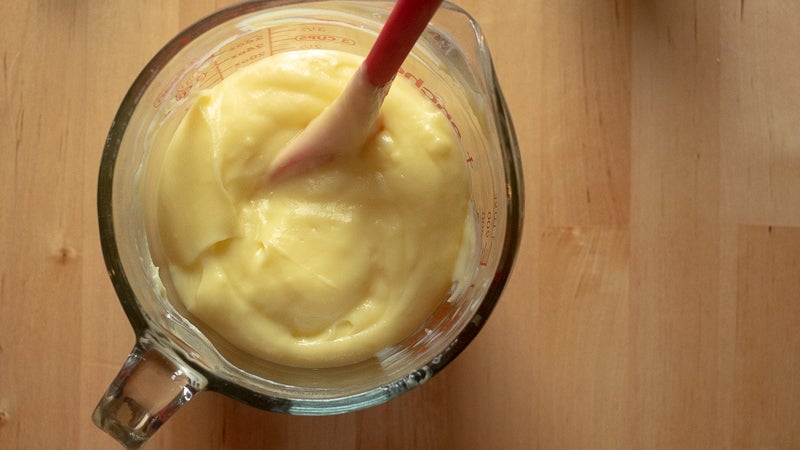 This will happen pretty fast, so keep an eye on it.

Temper the egg mixture by gradually pouring about half a cup of the hot milk while stirring continuously with a fork. Scrape the eggs back into the hot milk, stir thoroughly with a flexible spatula, and return to the microwave. Heat on high power in 30-second increments, stirring thoroughly in between, until the mixture comes to a boil and thickens to a pudding-like consistency. This should take no more than two minutes.

Stir in the salt, vanilla extract, and butter, and pass the cream through a fine mesh strainer into a clean bowl. Press plastic wrap directly on the surface of the cream and chill completely. This will keep in the fridge for up to three days. 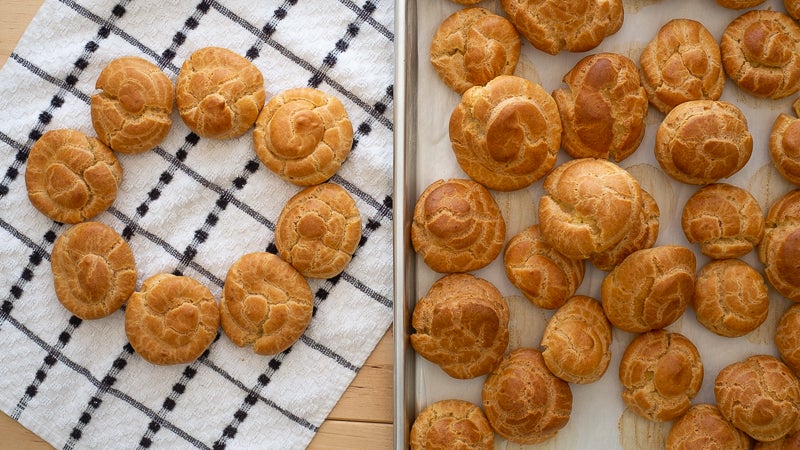 This was my gateway drug into the world of microwave pâtisserie. Stovetop choux isn’t that difficult, but if you’re at all distractible it’s easy to get bored with the constant vigorous stirring, walk away for a moment, and burn the bottom. The microwave makes it all but impossible to fuck up.

My go-to recipe comes from the Flavour Bender blog; all I do is swap a microwave for a saucepan. This recipe works because it calls for more flour than most, which results in a sturdier puff. For a croquembouche-sized batch, you will need:

First things first: heat your oven to 190 degrees Celsius. Line two baking sheets with parchment paper and stand a pastry bag fitted with a medium-sized standard tip in a tall, narrow glass. Fold the edges of the open bag over the rim to stabilise it.

Pour the water into a large, microwave-safe measuring bowl and add the butter. Microwave on high power until the butter has melted and the mixture just starts to boil, between four and five minutes. Mix the flour, salt, and sugar together in a separate bowl while you wait. 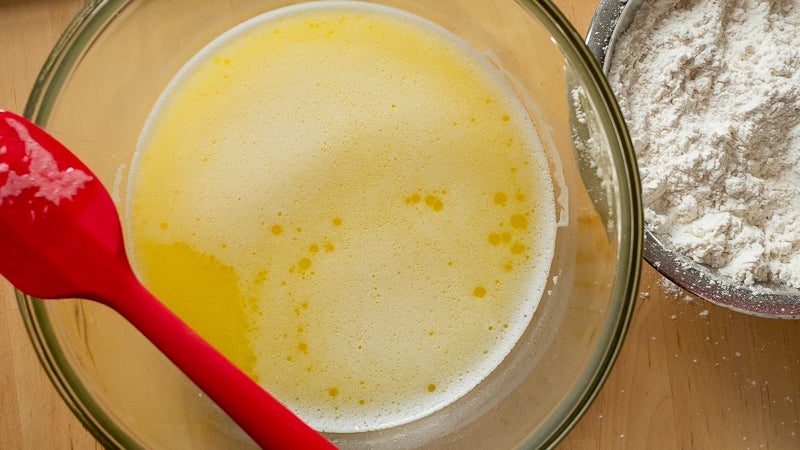 Start with just-boiled water and butter, with a side of dry ingredients. 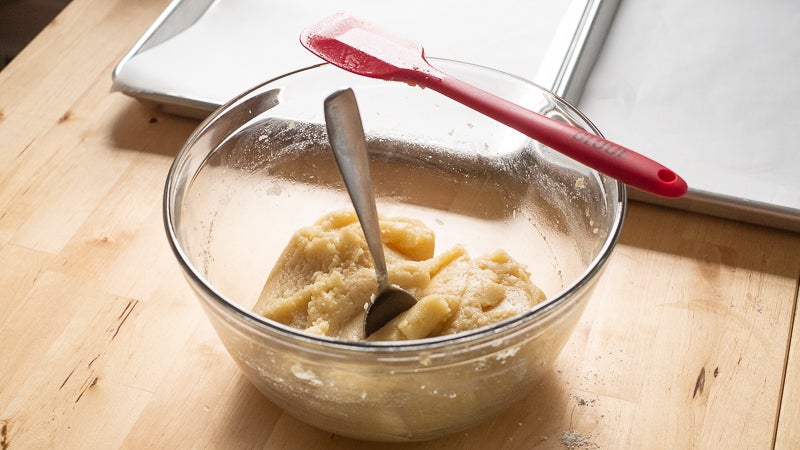 After three to six minutes in the microwave—and lots of stirring and scraping with that spatula—you should be able to stand a spoon straight up in the dough. 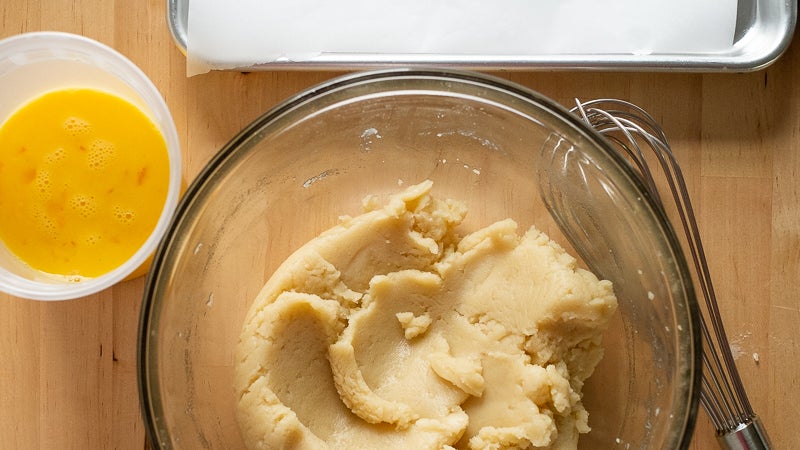 Ready for the eggs.

Dump the flour, salt, and sugar into the boiling liquids in one go and stir vigorously with a silicone spatula until the mixture balls up. Return to the microwave and heat in one-minute increments, stirring vigorously each time, until you can see oil droplets forming on the surface of the dough and a spoon sticks straight up in it without falling over. This is a very important step: if you don’t evaporate enough water here, the choux will be too soft to hold its shape. Give it at least three full minutes in the microwave, although mine took closer to six. Once it’s fully cooked, set the dough aside to cool for a few minutes before adding the eggs.

While the dough cools, crack your eggs into an easy-pour container and gently beat with a fork until homogenous. Gradually dribble the eggs into the warm dough a few tablespoons at a time, beating vigorously with a spatula between each addition to ensure every bit of egg gets absorbed. Keep at it until you have a thick, glossy substance that s-l-o-w-l-y falls from the spatula in V-shaped ribbons: 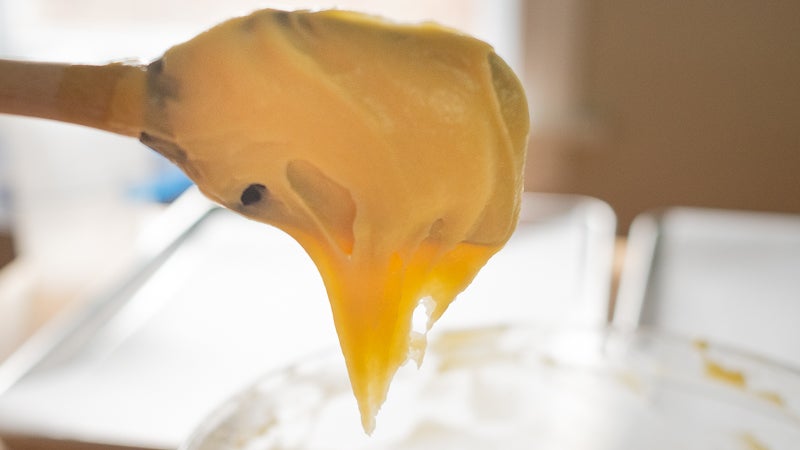 Once you hit this point, stop adding eggs and discard any extra. 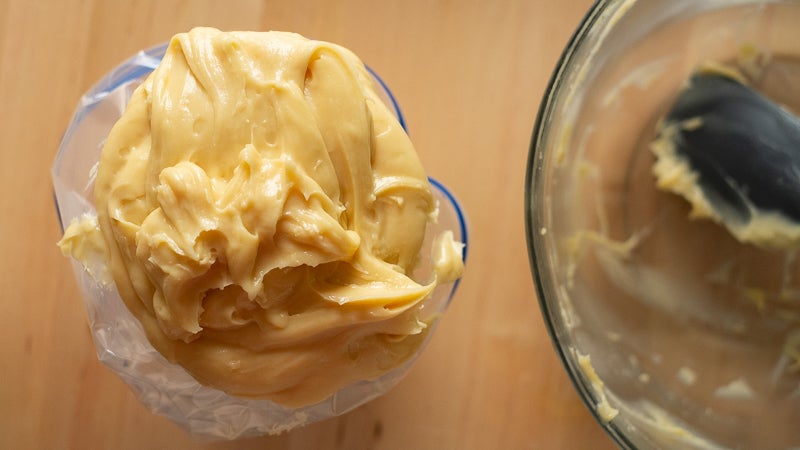 Get it all in there. 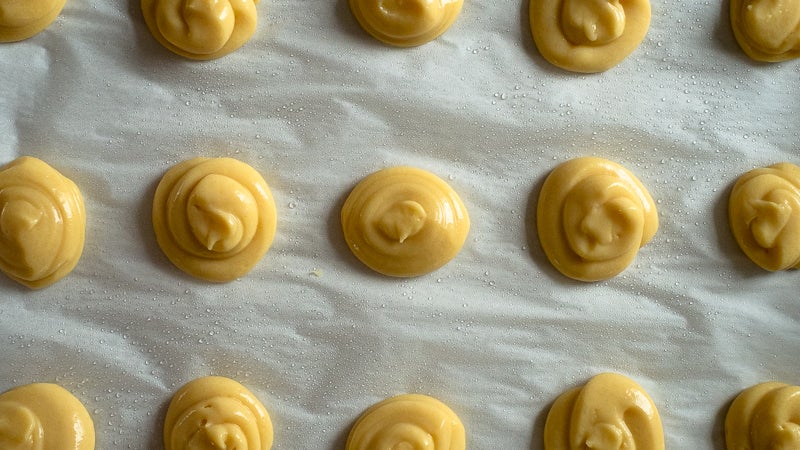 Here we have the two schools of piping choux puffs: the swirly poo emoji and the classic “smush, squeeze, and lift” method. 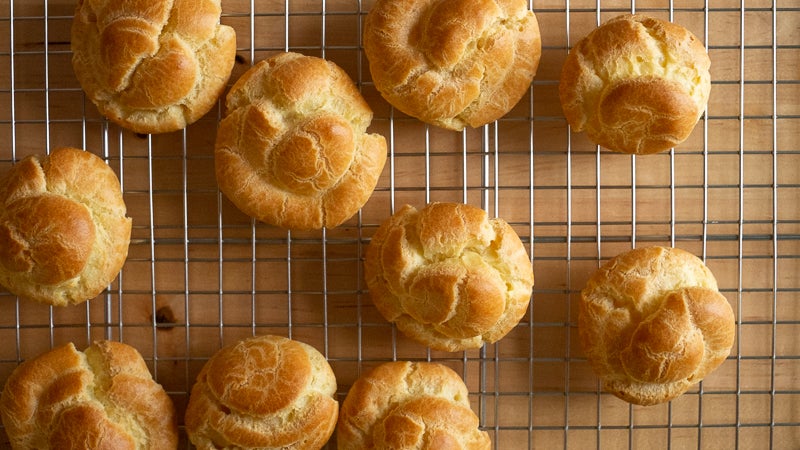 After about 40 minutes at 190º, they should look a little like this. (Honestly? These could have stayed in for an extra ten minutes.) 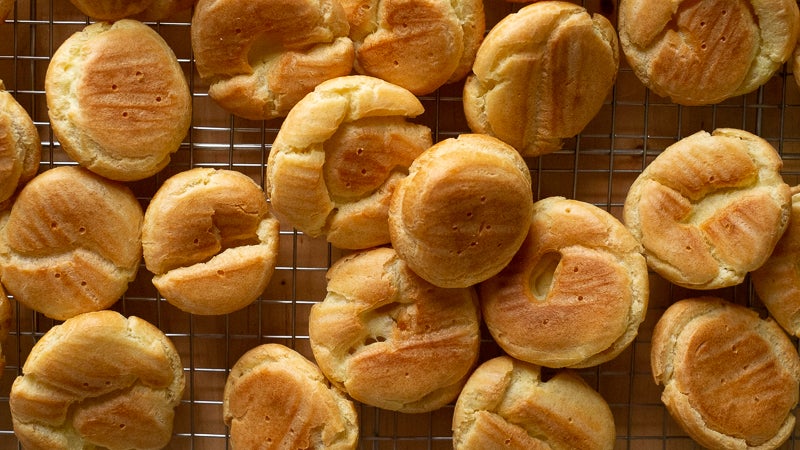 Flip them over and poke holes in the bottom so the steam has somewhere to go as they cool. 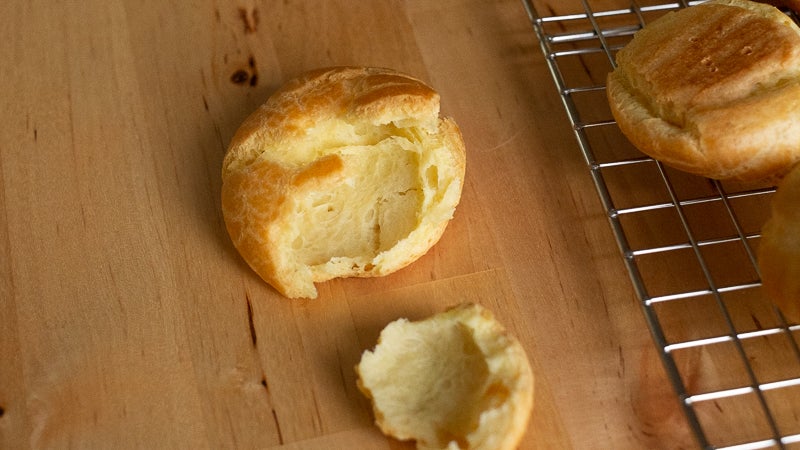 You should have some beautifully hollow puffs with slightly custardy insides.

Scoop the dough into your pastry bag and pipe onto the prepared baking sheets in roughly one-inch diameter circles. Press any pointy bits down with a wet finger. Transfer to the hot oven and bake for at least 35 minutes and up to 45; for maximum stability, every nook and cranny of every puff needs to be golden brown. Immediately transfer cooked puffs to a cooling rack, flip them over, and use a toothpick, fork, or paring knife to poke a couple of holes in the base. (This lets extra steam escape.) Repeat with any remaining dough.

Cooled puffs will keep in an airtight container for about two days. 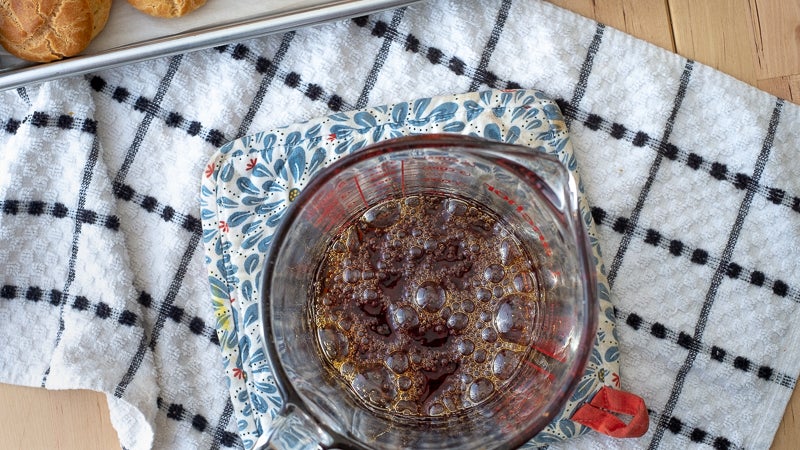 Before this weekend, I had never made caramel in the microwave, but I knew it was A Thing that People Do. I figured I’d toss some sugar in a glass measuring cup, nuke the crap out of it, and come out the other side with perfect, low-effort caramel. Since I never make mistakes, that’s exactly how it went.

Just kidding! I crystallised four pounds of sugar and cried once before I broke down and watched a video from Martha Stewart’s website about fixing fucked-up caramel. In this video, a friendly man named Thomas casually drops a life-changing tip: you can prevent caramel from crystallizing by slapping a lid on it. All the water that evaporates off the sugar mixture drips right back down, ensuring everything melts evenly. No caramel recipe I’ve read has ever suggested this, and I will die mad at every person who kept it from me all these years. Save a life—put a lid on your caramel.

Here’s what you need:

Add sugar and lemon juice, if using, to a 4-cup, microwave-safe glass vessel. (Melted sugar gets dangerously hot. If you wouldn’t put it in the oven, don’t use it here.) Stir in just enough water to make something with the texture of wet sand. Cover with a microwave-safe plate and heat on high power for three to five minutes, stirring once or twice, until the mixture is crystal clear and boiling away. Remove the plate and continue heating in 30-second increments until the sugar is a shade or two lighter than you’d like; it’ll continue to cook as it cools down. If the sugar starts to crystallize, dribble in another tablespoon of water, put the plate back on, and heat until everything re-dissolves.

Carefully—seriously, this’ll melt your skin clean off—place the caramel vessel on a heatproof trivet and let it cool for at least ten minutes. Gather your chilled pastry cream and choux puffs and get ready to build a festive, sugary tower. 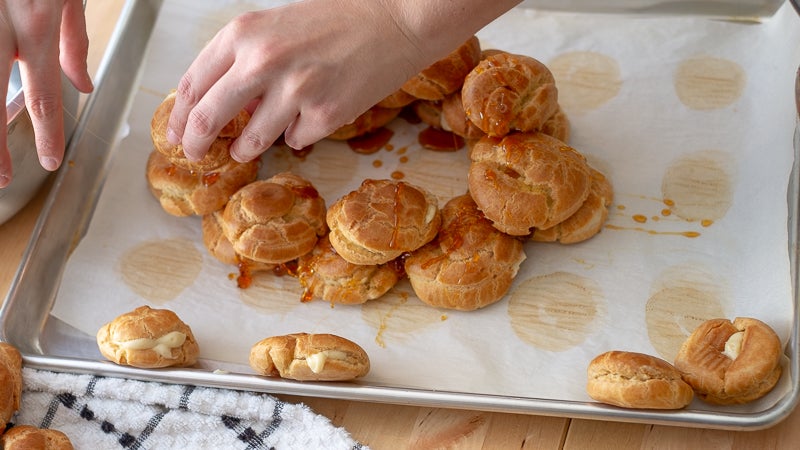 Boil a kettle of water and place the caramel vessel inside a large, heatproof bowl. Pour boiling water into the bowl until it’s level with the top of the caramel. This will keep it from seizing halfway through construction.

Line a serving tray with parchment, or re-use the parchment-lined pan you baked the puffs on. Trace an eight-inch circle on the center of the parchment with pencil and flip the paper over; the circle should still be visible. Being a Pisces, I took a freehand approach to construction and passionately wish I hadn’t. Trace the stupid circle, folks.

Before you start gluing shit together willy-nilly, scoop the pastry cream into a pastry bag fitted with a small tip (or a gallon-sized plastic zipper bag) and poke a hole in the side of each choux puff with a paring knife or chopstick. Using the circle as a guide, start stacking dry, empty puffs on top of each other to make a cone. (This is another thing I didn’t do and really wish I had.)

Once you’re confident in the arrangement, start piping the pastry cream into your choux puffs. Drizzle caramel on the bottom and sides of each filled puff, then firmly press it onto whatever is underneath and beside it. If you can rope someone into helping with this, assembly-line style, it’ll go quickly. 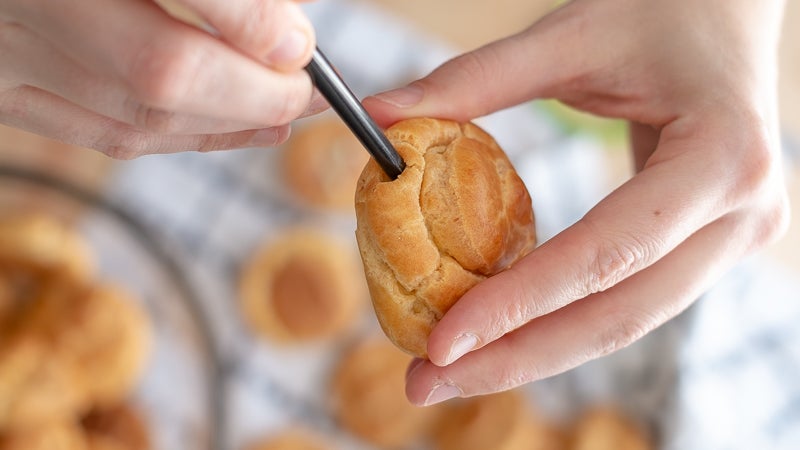 Stack ‘em up and stick ‘em together. 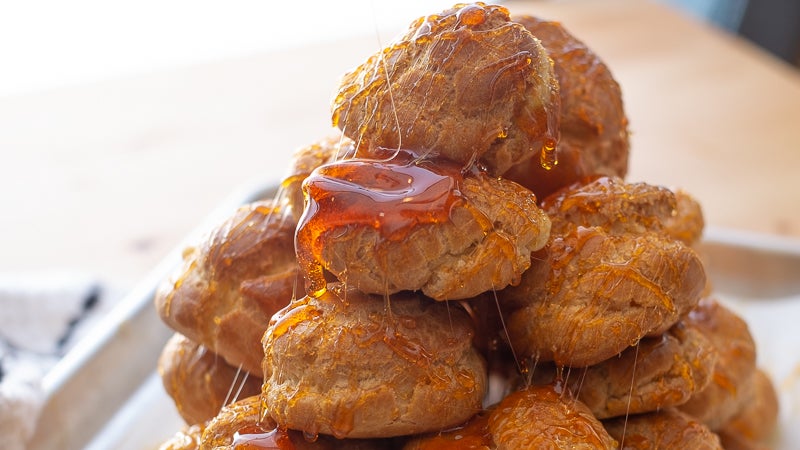