Cool Down This Summer With Alcoholic Ice Blocks

Sure, ice cold cocktails and frozen drinks can be great when the weather’s hot, but what your summer really needs is an alcoholic frozen ice blocks.

A lot of weekends I find myself at my neighbourhood park. The park is a meeting place for locals on the weekends, and I like to join friends there for Saturday picnics and beers. For some reason it’s a spot where the police don’t seem to mind if you’re drinking, and since it’s such a hangout spot it lends itself to a number of… entrepreneurs that are trying to make some quick cash selling stuff like pizza, snacks, and of course booze.

My favourite vendor is a guy who sells fresh coconuts. He cuts off the top and has you drink while he cuts off the top of his next customer’s. Then he fills your coconut up with rum to compensate for the lost juice. At $15 a pop, it’s the best game in town.

And then last week I met a guy selling cocktails in the form of frozen ice blocks. Pure genius.

He was selling them in a number of flavours for $8 each. That was a little too pricey in my opinion for an ice pop you’re purchasing from a stranger in a park, but it was inspirational. I ordered a pack of ice block bags on my phone while we were still at the park (after determining that was in fact a thing you could buy) and made my first batch of margarita pops on Tuesday when they arrived. 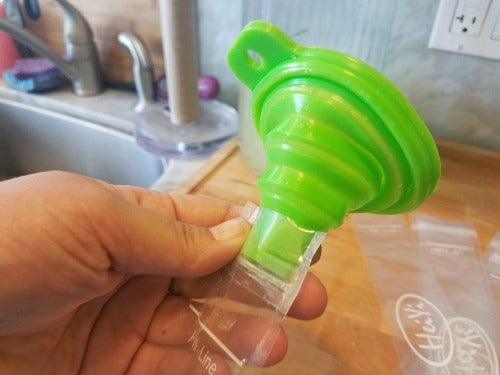 I loved ice blocks as a kid. Alcoholic ice blocks sounded like a dream.

To make your own pops you essentially just whip up your favourite cocktail, pour it into the bags, and freeze them. Since alcohol has a lower freezing point than your average fruit juice you do have to pay attention to the overall ABV of your creation. Super high-alcohol treats just won’t freeze.

Claire did an awesome job explaining how to perfect a recipe in her post a few years back on making boozy ice blocks, which are also a great idea.

Alcoholic popsicles are a great concept but, thanks to ethanol's low freezing point, it's not as simple as throwing some booze into an ice block mould and tossing it in the freezer. But don't let that deter you from making fabulous frozen, boozy treats. All you need to do is pay attention to the ABV.

I’d done the ice block thing before, but the issue is they just don’t transport well. They’re great to pull out for a treat at home, but if you want to bring them to a party or the park, you have to worry about collecting your moulds after everyone’s done.

They also take up a significant amount of freezer real estate, since you can’t put them on their side early on because they’ll leak all over the place. You’re limited by the number of moulds you have as well. If you only have a six-pop mould, then you’re only making six ice blocks at a time.

With ice blocks, I could make hundreds at a time if I wanted to, and they can sit pretty much anywhere I can fit them in my cramped freezer. Since they’re essentially just cheap plastic bags I can also toss them afterwards (although you certainly could wash them and reuse them), so I don’t have to hover over my friends and make sure no mould pieces get lost during consumption.

My 100-pack of ice block bags was just $10 and came with a funnel for filling them (which I found super useful), and a recipe book with instructions on how to make your own. There’s a zip-lock built into the top to seal them once they’re filled, and scoring a bit below that if you want to rip off the top to enjoy them. All the recipes in the included book had an alcoholic version as well.

Clearly, my park friend wasn’t the first one to come up with the idea. 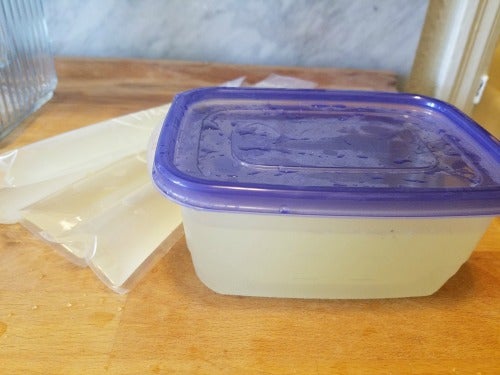 The book also made another odd suggestion: just fill up zip-lock bags. I tried it out and found it was a little awkward with a full-sized sandwich bag. I could see it maybe working for a snack-sized bag instead. It did inspire me to fill up a Tupperware container with margarita though. I made it a little too boozy to freeze entirely, so what I ended up with was kind of the consistency of a snow cone. On a hot day I can definitely see myself digging into that with a spoon.