What To Know About Donating Your Body To Science 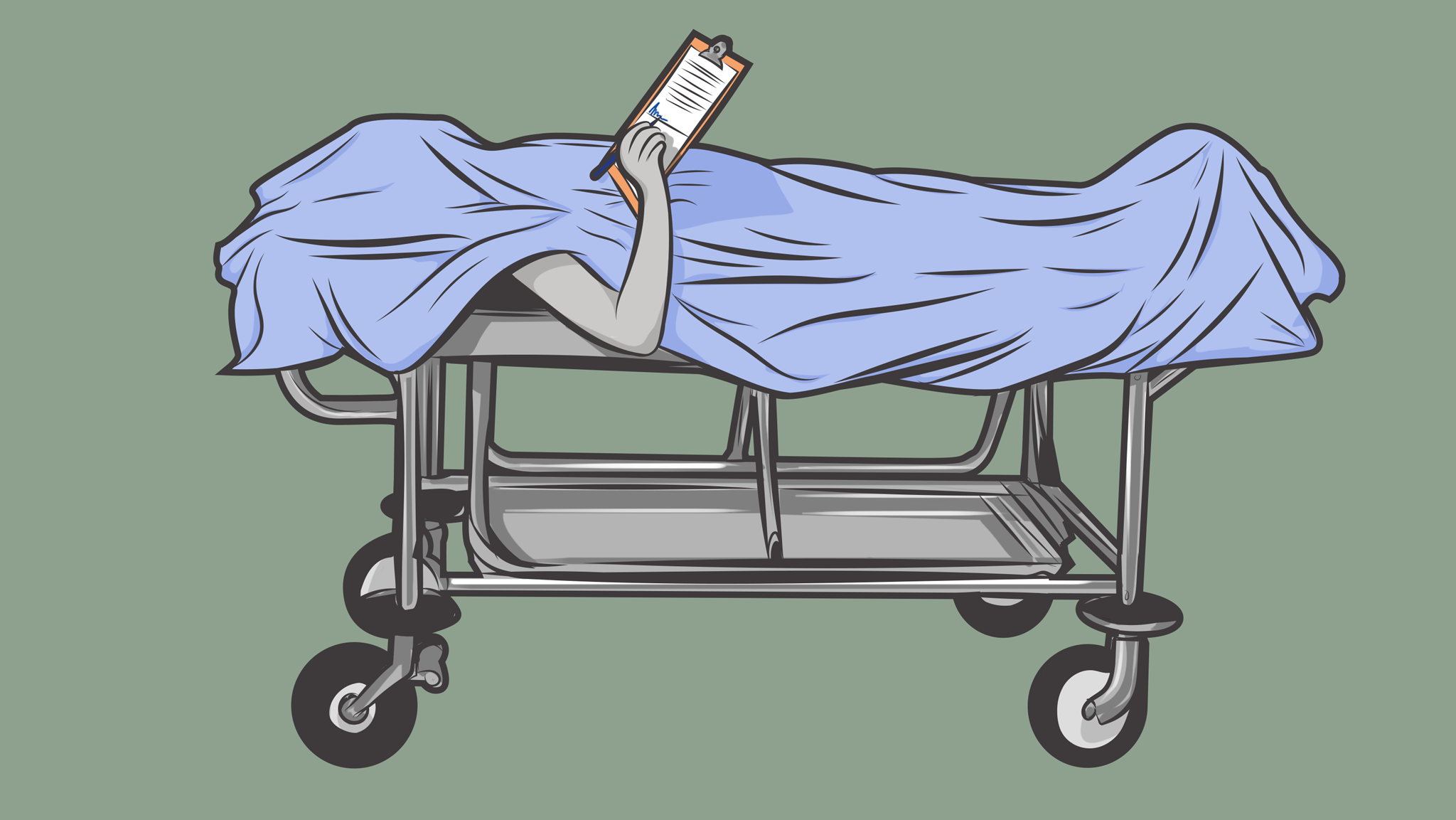 Content warning: There are some potentially disturbing images of dead bodies throughout this story.

We've all heard of donating your body to science, but what does it really mean? Let's talk about what happens when you give your body to further medical research and education. (We won't be discussing donation of individual organs or tissues, which is covered here.)

What Does "Body Donation" Mean?

Body donation, or an anatomical gift, is simply the donation of your full body after your death to be used for medical research. They will most commonly be used in anatomy classes to educate medical students or even fitness instructors, and for surgical practice.

In Mary Roach's popular book Stiff: The Curious Lives of Human Cadavers, she expresses surprise and concern that parts, at least, of donated bodies could end up as practice for plastic surgeons.

She feels that if someone donated their corpse, "for the betterment of science," that perhaps they'd be chagrined if they knew they were just practice noses for rhinoplasty. Roach does concede, however, that using donated cadavers in this way is justifiable, as surgeons who do these procedures do need to learn how to do them well.

And while you may never really know where your remains might end up after signing them away, or in what way they will be utilised, there are plenty of institutions that will be grateful for your anatomical gift and will treat your remains with respect.

How Will My Body Be Treated? 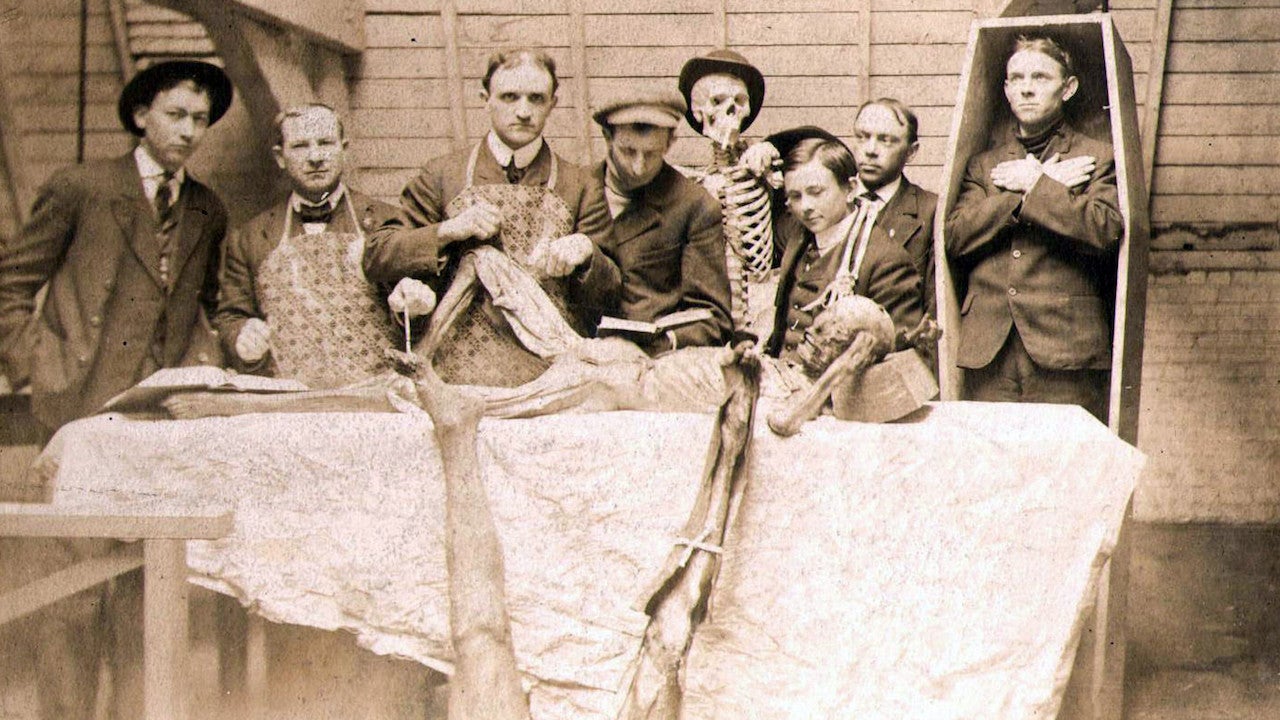 Many people feel some anxiety about how their body will be treated, post-death. And not without cause. There is a long history of medical students having a laugh with their cadavers, or dressing them up, or giving them irreverent nicknames. Will medical students make fun of your corpse and take pictures with you?

Fortunately, most of that behaviour is ancient history, and medical schools are actively working to teach their students empathy and respect for their cadavers.

Earlier this spring, Mercy College in Dobbs Ferry, New York, held an Anatomical Donor Appreciation Ceremony. A poem was read by Dr. Ferdinand Esser, the tissue-compliance officer. He extorted people to "listen to the generous presence of the donors."

A slideshow was played to musical accompaniment featuring statements of thanks from the students to their cadavers, their "silent mentors". Glass bowls full of LED candles featuring the initials of each of the donated bodies sat on each table. 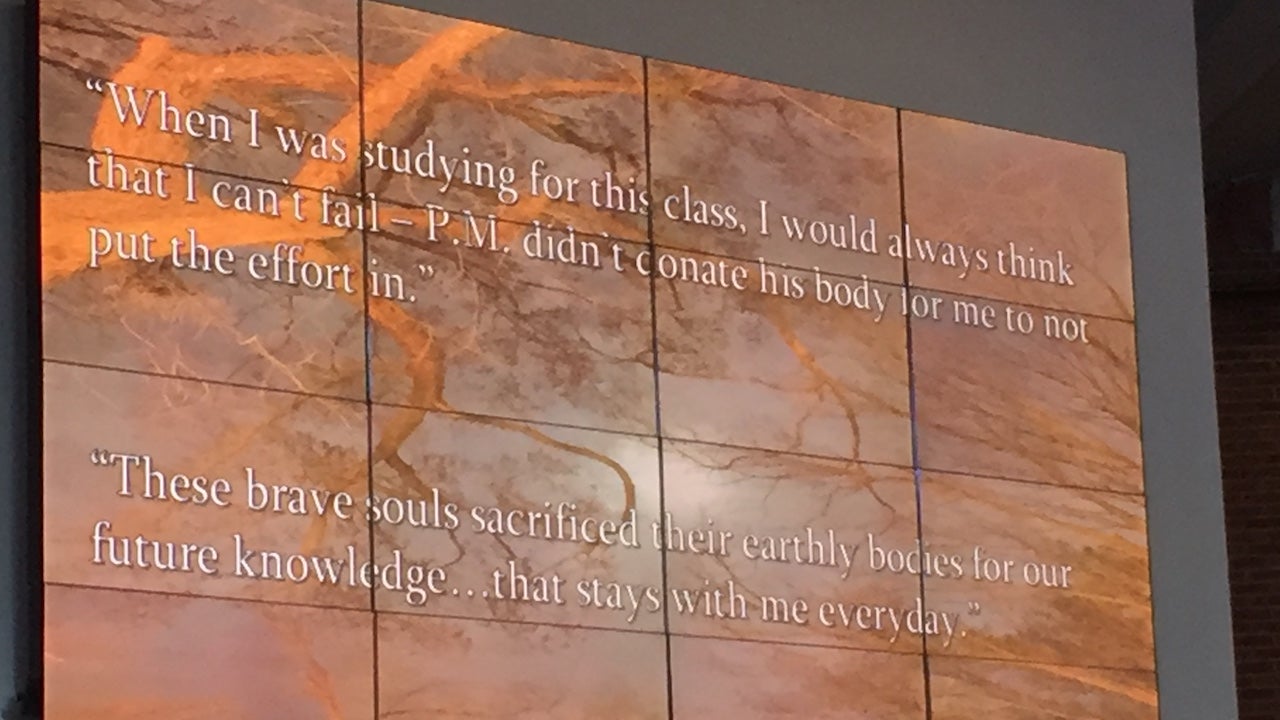 A slide from the Mercy College Anatomical Donor Appreciation Ceremony

Dr. Kathleen Golisz, the Associate Dean of the School of Health and Natural Sciences at Mercy, points out the idea for the ceremony came from the students, who wanted to honour their cadavers. She says, "A lot of colleges don't do anatomy with cadavers anymore, but we really have a strong belief that it gives you the opportunity to learn something that you can only learn this way."

With palpable passion, she speaks of her desire to give stories to the people who donated their bodies, to wonder about their histories, and to have empathy for their injuries or medical conditions.

Emily Feit, an occupational therapy graduate student, had a unique perspective on the event. When she was only three years old, she attended the ceremony that honored her grandfather for donating his body to the University of Iowa. Twenty years later, she attended the donor appreciation ceremony for her grandmother's body. Now, this was her third ceremony.

In the context of her own studies, she described her appreciation during her lab, her wonderment at the life the body used to hold, "realisation that this tissue that I could hold in my hands and was able to study up close, was once a living part of someone's very life" - "the absolute miracle of inhabiting the body."

The awe and excitement that the staff and students experience, along with the reverence they feel toward the cadavers, are reassuring for anyone considering making an anatomical gift.

Why Should I Donate My Body?

In 2016 National Geographic reported that while the demand for teaching cadavers is up, supply is down.

Recently, New York State passed a controversial law ending a 162-year-old tradition that allowed unclaimed bodies to be used by medical schools. Now, written consent by the next of kin is required, or proof that the deceased had planned to donate their body. There may not be a better time to consider making the altruistic gift of the body that you won't be using anymore.

Golisz talked about other, more practical, reasons why a person or their next of kin might donate their body to a medical school. "It's a waste to put me in the ground - make me purposeful out there," she says. "Donating your body [also] saves the cost of the entire process of a funeral. There are family members who say, 'I don't have the 8 to 12 thousand dollars it costs to have a funeral.'"

How Can You Donate Your Body? 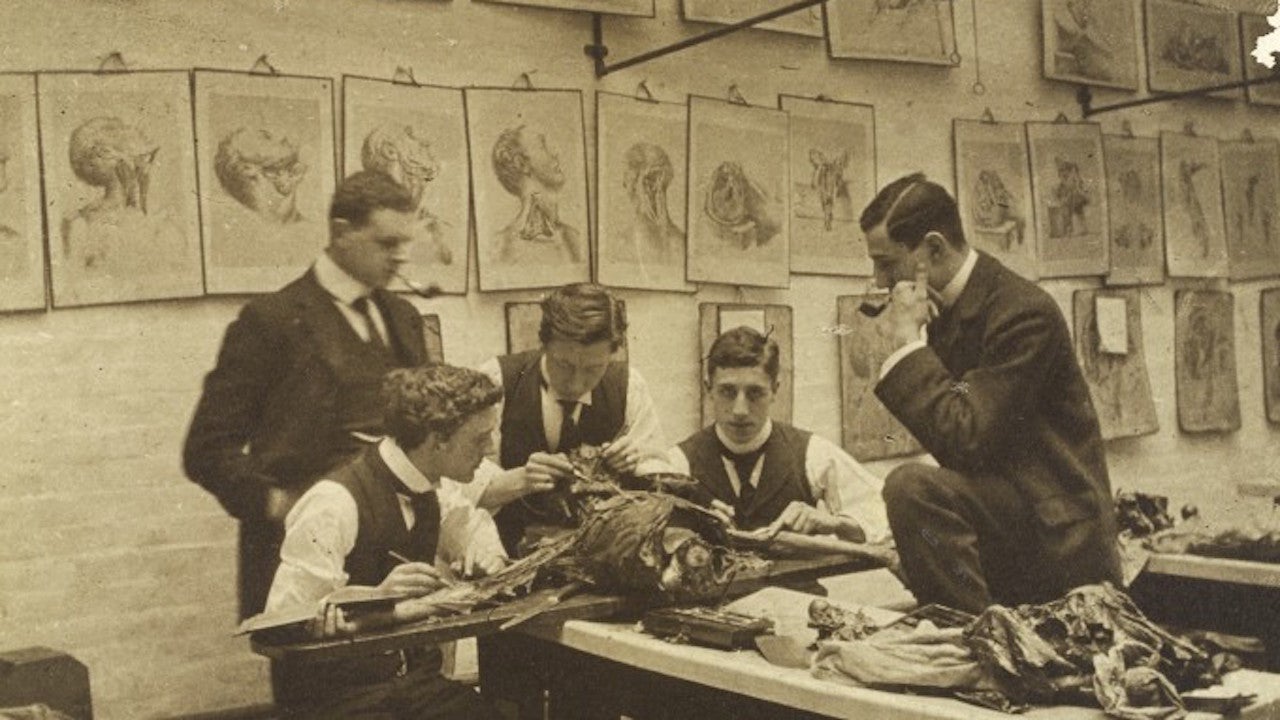 Mercy receives their teaching cadavers from Albany Medical Center, whose main source is private donation. You can either arrange to donate your own body in advance of your death, or the gift can be arranged by an executor after a death. All you have to do is fill out the form; it doesn't even need to be notarized. The school keeps a record of your donation and you will also be issued a donation card.

In Australia universities accept donated bodies for science and teaching. In order to organise the donation you will have to contact the university for donor forms and fill them out (either by yourself or by a family member). You will then be sent a confirmation and donor card by the university to keep on your person. It is also important to be verbal about your choice, tell your family, doctor or nursing home administrator/care giver of your wish so that the arrangements can be made after your passing.

Another step you can make is to add it into your will, if you feel as though anyone would stand in your way or just as an added measure.

Universities all over Australia will accept your donation and you can find their relevant contact information here.

You will of course want to make the decision ahead of time and make arrangements where ever necessary. The usefulness of a body depends upon its speedy delivery: a will is not the place for body-donation instructions. Wills often aren't even read until well after a body would be donatable.

What's a "Body Farm" and What Happens If I Donate My Body to One?

Behind the University of Tennessee Medical Center in Knoxville is the Anthropological Research Facility - commonly known as "The Body Farm." This is the first and the most well-known of these facilities, although there are several others in the United States.

Corpses are strewn about the grounds - in open air, in car trunks, on mattresses - to replicate how subjects of police investigations are often found. With these bodies, students learn how to determine time of death using the rate of decomposition under different conditions. Forensic entomologists will also be able to learn from the insects that inhabit a corpse and how quickly they do what they need to do.

Once decomposition and study has run its course, your skeleton will join the esteemed WM Bass Donated Skeletal Collection at the facility. You can learn about donating your body to the Anthropological Research Facility here.

What If You're More of An Artistic Type?

The donated corpses are preserved using a method called "plastination", which involves replacing the fluids and fats in the body with silicone rubber and then hardening them with gas, heat, or ultraviolet light. Von Hagens claims that you'll be preserved permanently, so there's no need to ever decide between burial or cremation.

Readers should note Hagens came under fire in 2009 for an exhibit in Germany in which dead people, presumably strangers to each other in life, were posed in the throes of sexual intercourse. So you never know in what way he may use your remains, but if you're game, you can contact Body Worlds about donation for plastination here.