I don’t know about you, dear reader, but I am still recovering from eating roughly five racks of ribs covered in delicious blueberry barbecue sauce after last week. But you can’t just spend your summer eating meat, so this week I’m turning my focus to one of summer’s most prominent vegetables: the ubiquitous, deliciously sweet ear of corn.

Yes, I know that maize is technically a grain, but sweet corn, the stuff you find everywhere for a dollar per ear this time of year, is typically prepared and eaten as a vegetable due to its high sugar/low starch content, and “vegetable” isn’t a scientific term anyway. 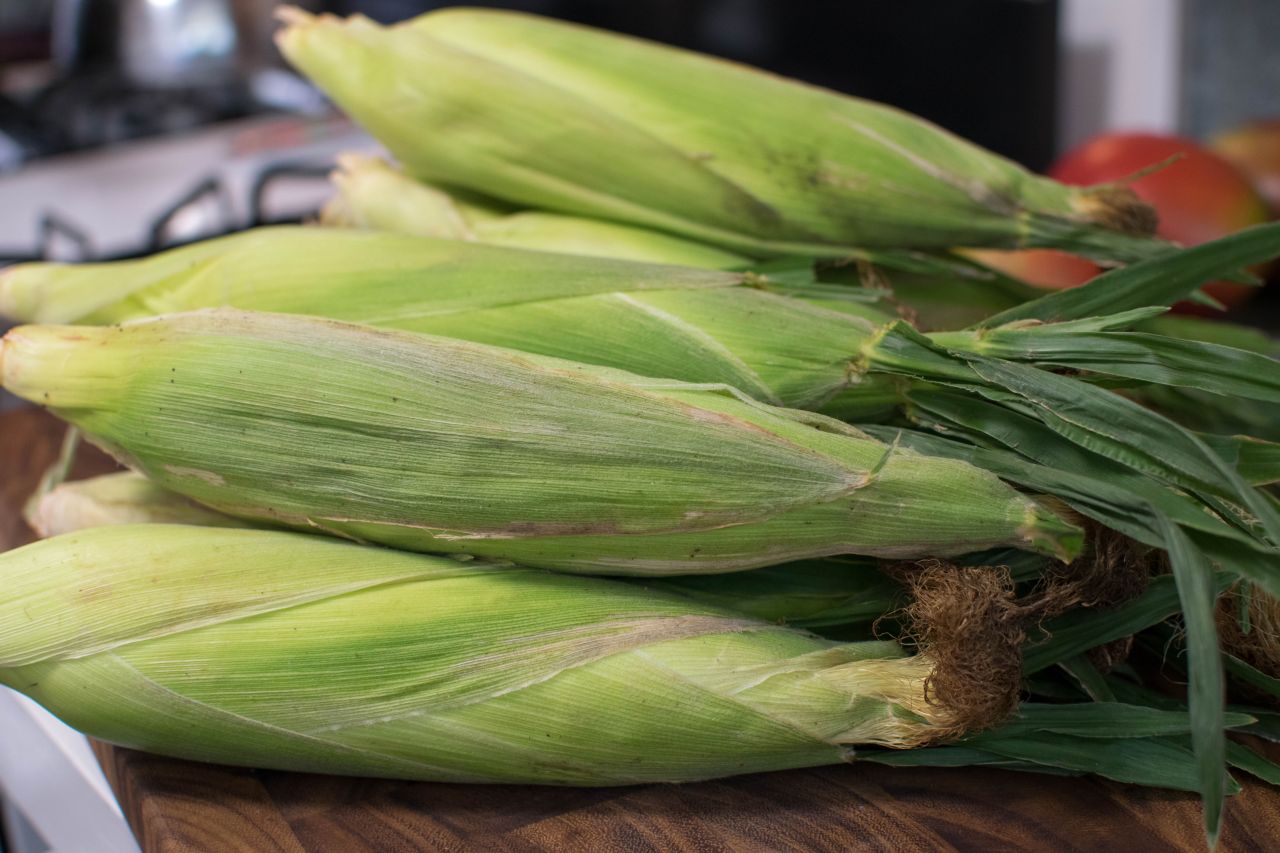 If you’ve been alive for any appreciable amount of time, you’ve had sweet corn on the cob. It can be found as pure yellow or white kernels, or a mix of both, typically in front of people fighting each other to husk it at the grocery store at 8:00 AM on a Sunday. It’s often seen as a throwaway side – you might get a 10cm length of cob as a side or a bunch of shaved kernels dumped in a bowl with “butter”. I boo these establishments, and I will tell you that corn can be awesome and delicious, and a great vehicle for flavour.

Sadly, that stuck-in-your-teeth goodness only lasts for a few weeks before it begins to disappear and prices shoot back into the stratosphere. But we aren’t just cooking today, no! We’ll also be preserving. In fact, it’s where I’m going to start. Corn is quickly approaching its bountiful apex and we need to lock that in.

About buying corn: The disparity between good and bad corn is huge, and if you can get your hands on good stuff it is absolutely worth it. Fresh corn will have a rich, soft green husk, and plump kernels that are easily punctured with your fingernail (do not ask your recently manicured girlfriend to test this). Not-so-fresh corn will have brown ends and a dry husk, as well as deflated, faded looking kernels.

To maximise freshness, buy your corn on the day you’re going to prepare it. While grocery stores are selling ears for next to nothing in my neck of the woods, I strongly recommend seeking out and paying a visit to a farm stand. 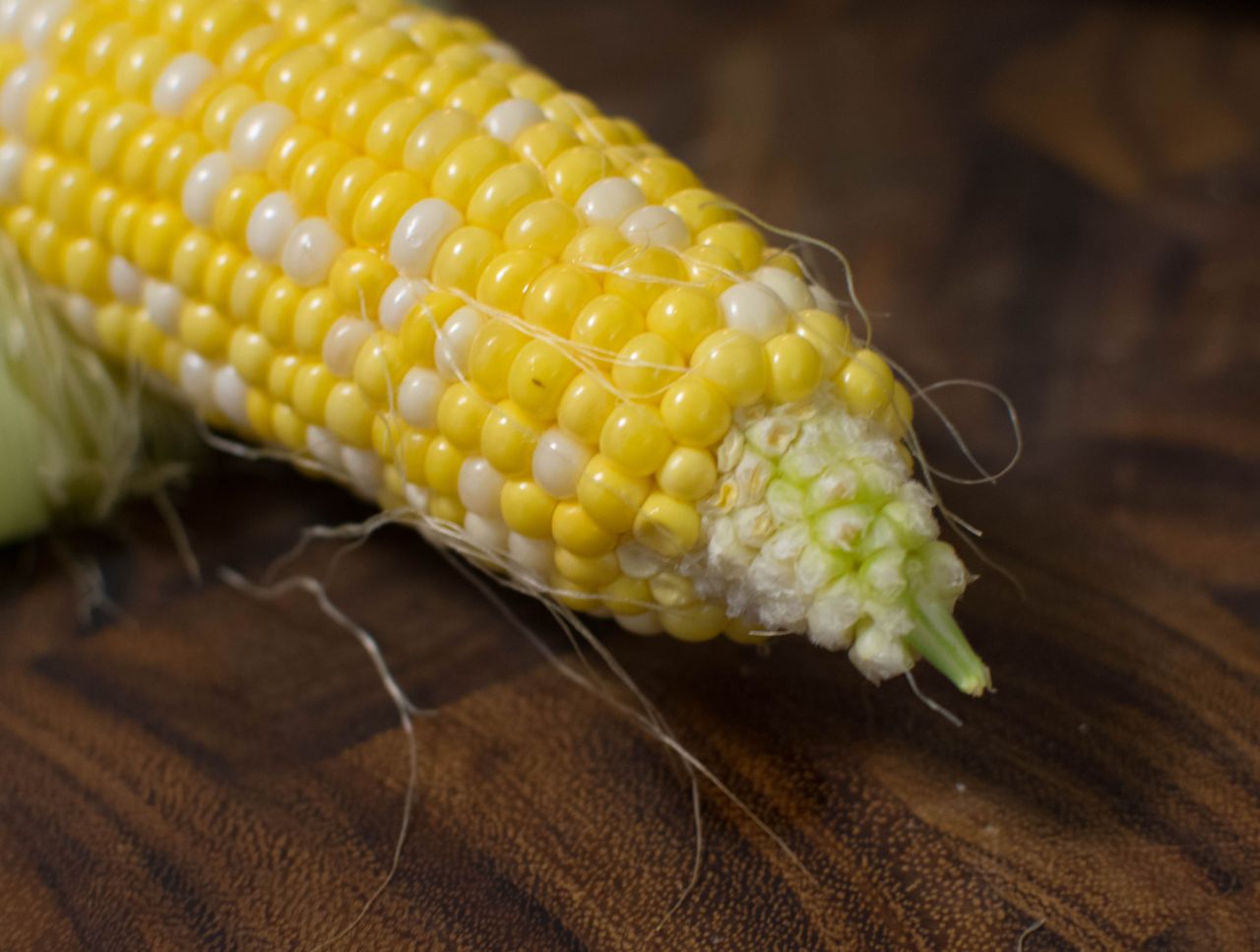 This isn’t due to bugs or poor growth – it’s just a bit too young. Peak season isn’t for a few more weeks.

This isn’t due to bugs or poor growth – it’s just a bit too young. Peak season isn’t for a few more weeks.

The best method for preserving corn is by blanching, and that’s exactly what we’re doing. Start by husking and removing the silk from each ear, but leave the long stem. Once your water is boiling, drop in a few ears, cover the pan, and boil for about 5 minutes. Once the time has elapsed, remove the cobs to the ice bath for five minutes to cool. Repeat until you’ve exhausted your corn stock. 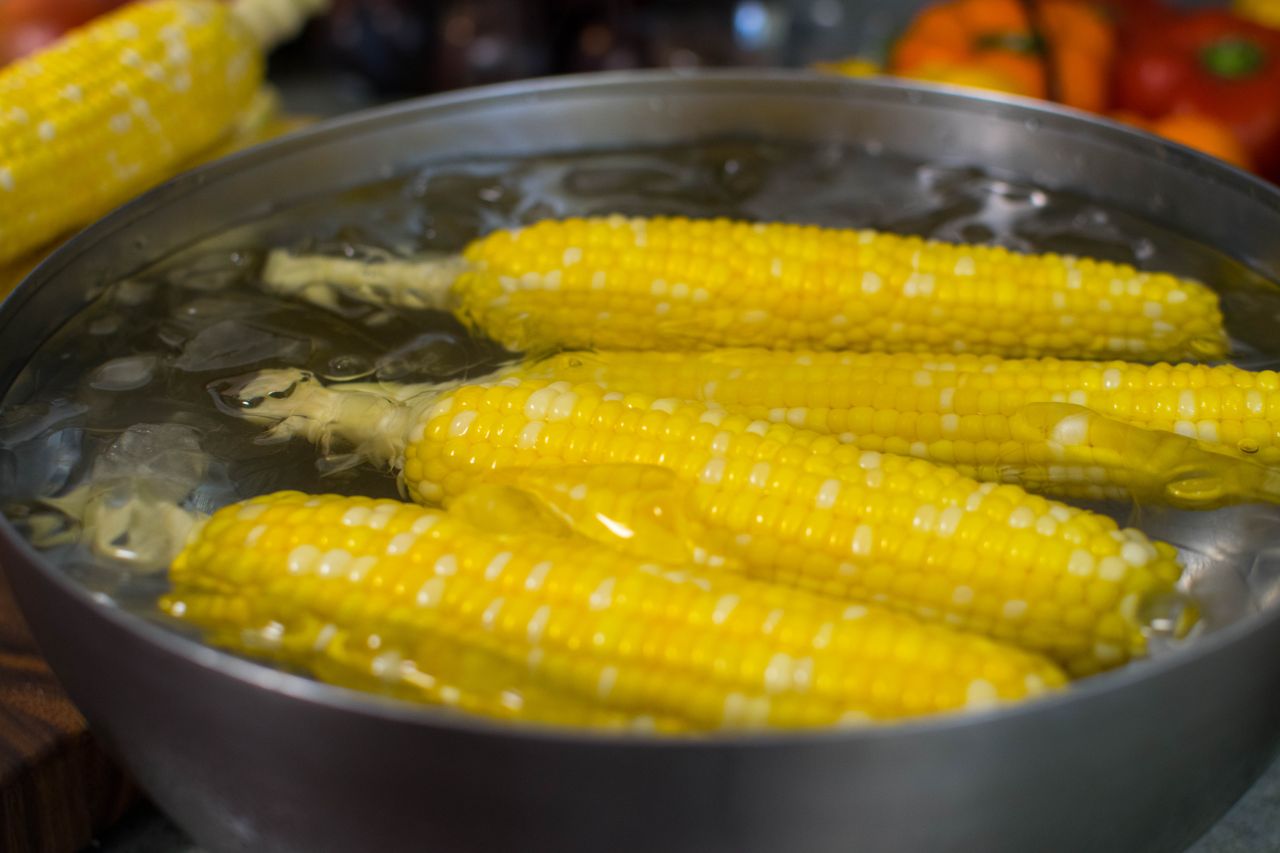 When blanching, keep the items in an ice bath for equal time that they were in the hot stuff to ensure fully stopped cooking.

When blanching, keep the items in an ice bath for equal time that they were in the hot stuff to ensure fully stopped cooking.

Pat the corn dry with a paper towel and use this time to decide: Are you going to keep this as a whole cob or individual kernels? Whole cobs can go in the bag, just make sure that you squeeze every last bit of air out before freezing. If you want kernels though.. 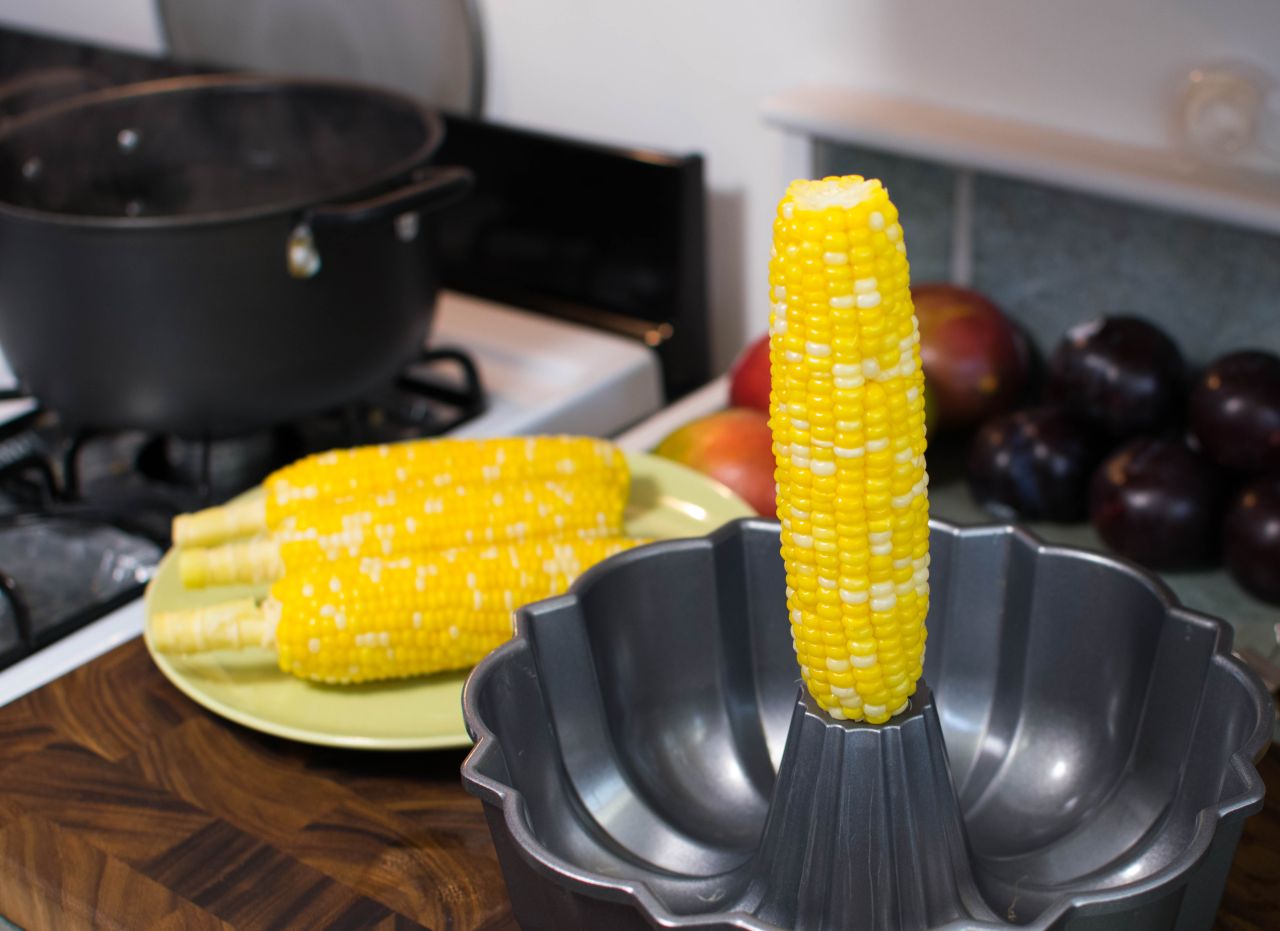 I expect a call shortly from my mother about the unauthorised usage of this pan.

I expect a call shortly from my mother about the unauthorised usage of this pan.

Place the stem in the center of the bundt pan and carefully, carefully, carefully slice the kernels off. I like a boning knife here for more control, but if you have one — an electric knife is great. There is still inherent risk with any blade, but the process is much faster and more consistent. 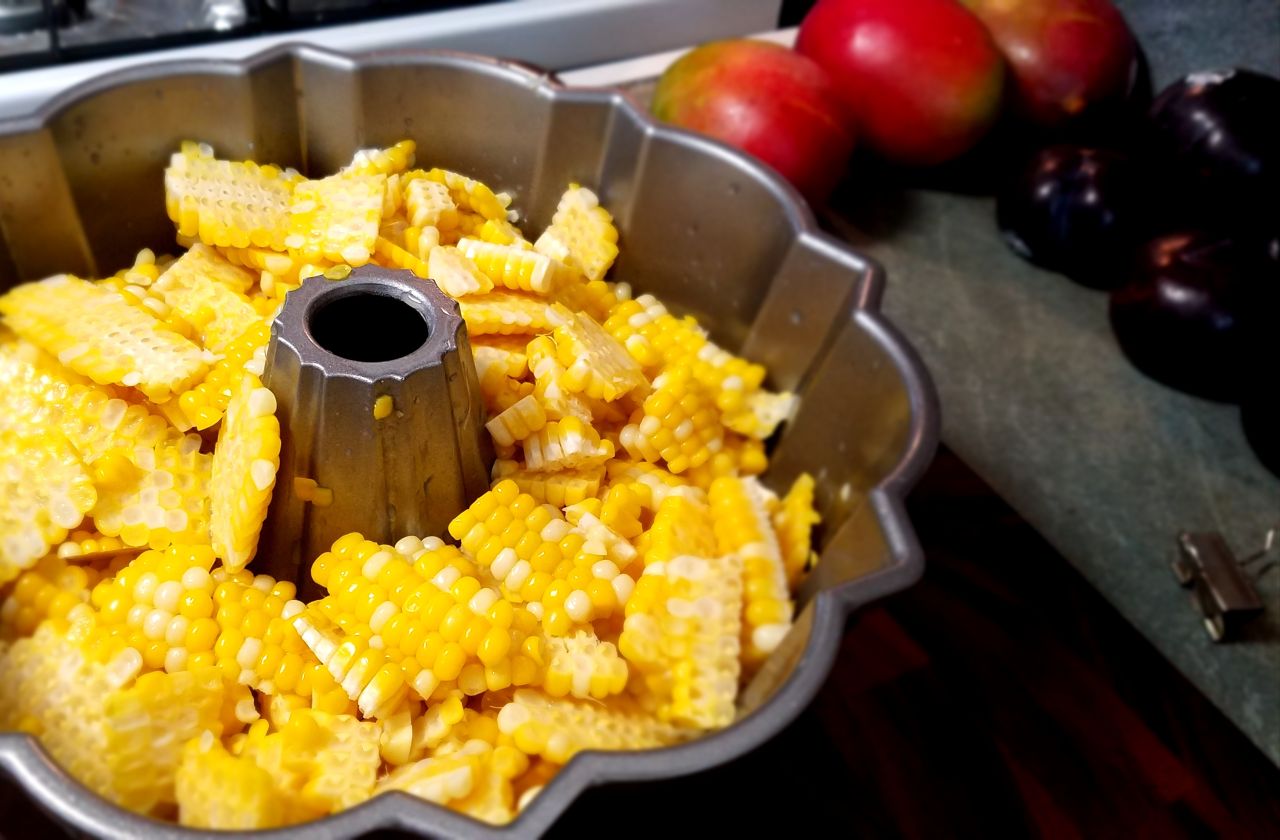 I ate so many of these little corn bricks.

I ate so many of these little corn bricks.

The bundt pan will collect your kernels, which you can bag and freeze. This method, as well as the whole cob method, will keep for up to twelve months. Or, you could get a few things you probably have in your culinary arsenal and make the most delicious final form of corn imaginable: Esquites. 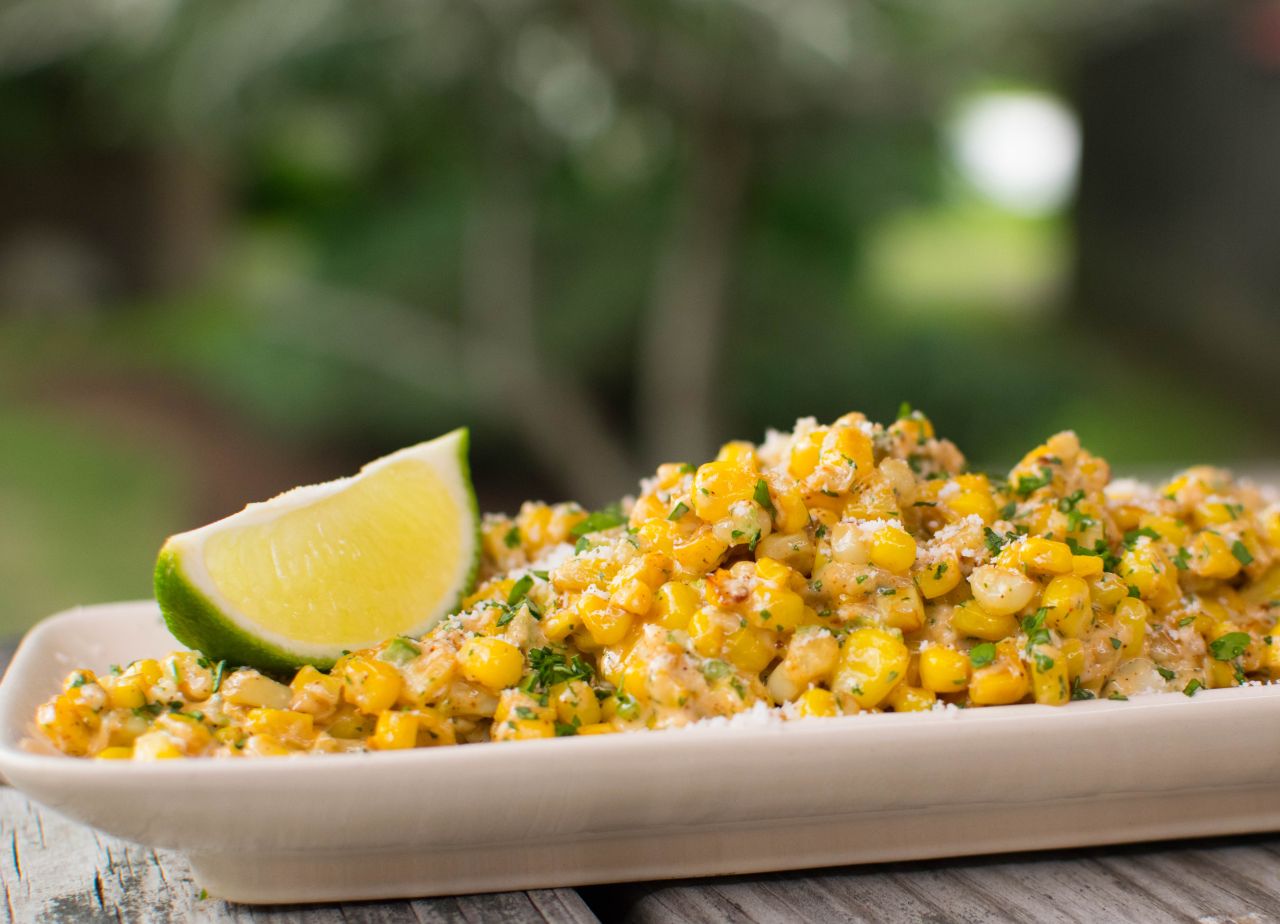 Essentially an off-the-cob version of elotes, esquites is dangerous. You see, with a cob, you have to stop at some point. The cob runs out. With esquites, you’re dropping 5 ears’ worth of kernels into a bowl, covering it in a sauce that would make every deity weep with joy and then not eating the whole thing because you have eliminated desire from your heart. Also, you have to share.

Cotija cheese isn’t always easy to come by, thankfully most of the big stores carry ricotta salata these days. Some publications would say that feta is an acceptable substitute, but I find it a bit too sour for this application. Ricotta salata is a bit nutty, but doesn’t carry the same tang as feta.

Heat the oil in a 30cm skillet over medium-high heat. Add the corn and a pinch of salt, and leave it alone for two to three minutes. You want the corn to char. Toss, stir and repeat until charred on all sides, about eight to 10 minutes total. Pan materials and burner sizes vary, so use your best judgment here. When it’s done, remove the corn to a large mixing bowl. Combine the remaining ingredients with the corn, stir to combine and serve immediately. I mean look at this, do you really think you’d be capable of leaving it alone? I couldn’t. I didn’t. It wasn’t pretty. 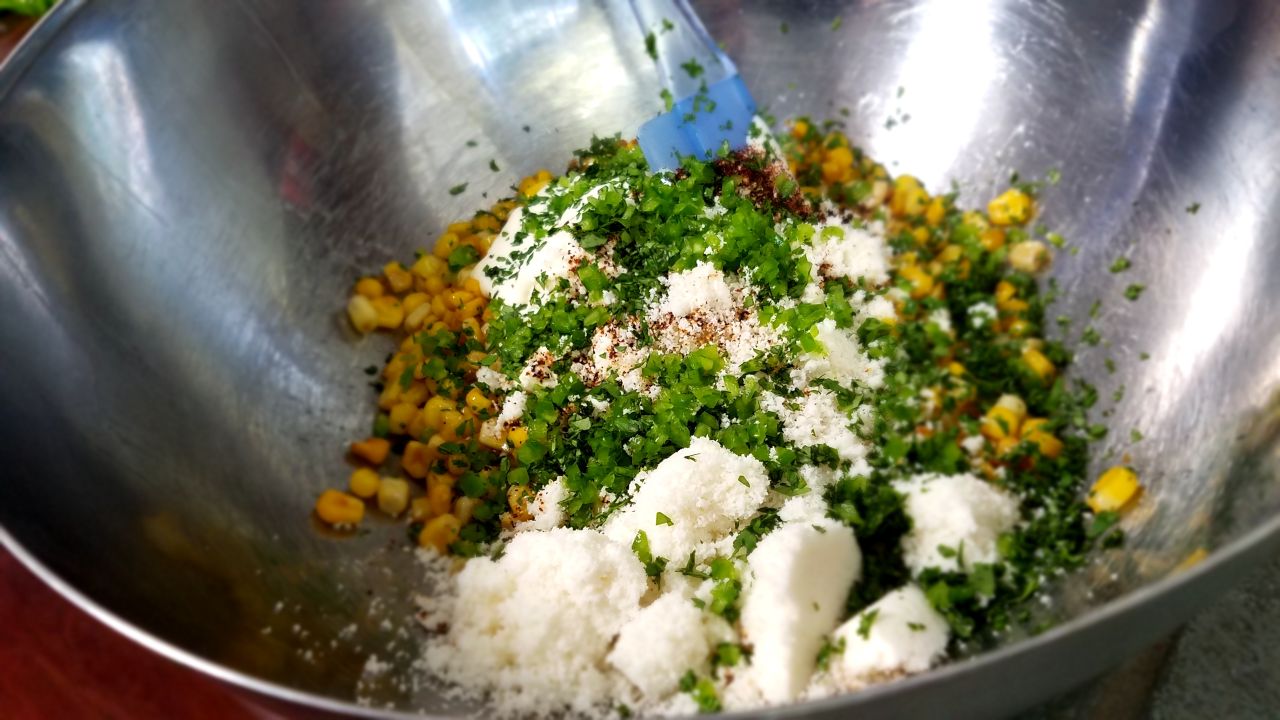 What is pretty, though, is the number of options you now have year-round with your summer corn stash. Cornbread? Sure. But also fritters, out of season crawfish boils, winter soups and chowders, amazing salsa with a sweet little punch in July, or even ice cream. I might make a corn quiche this week and not tell anyone about it. 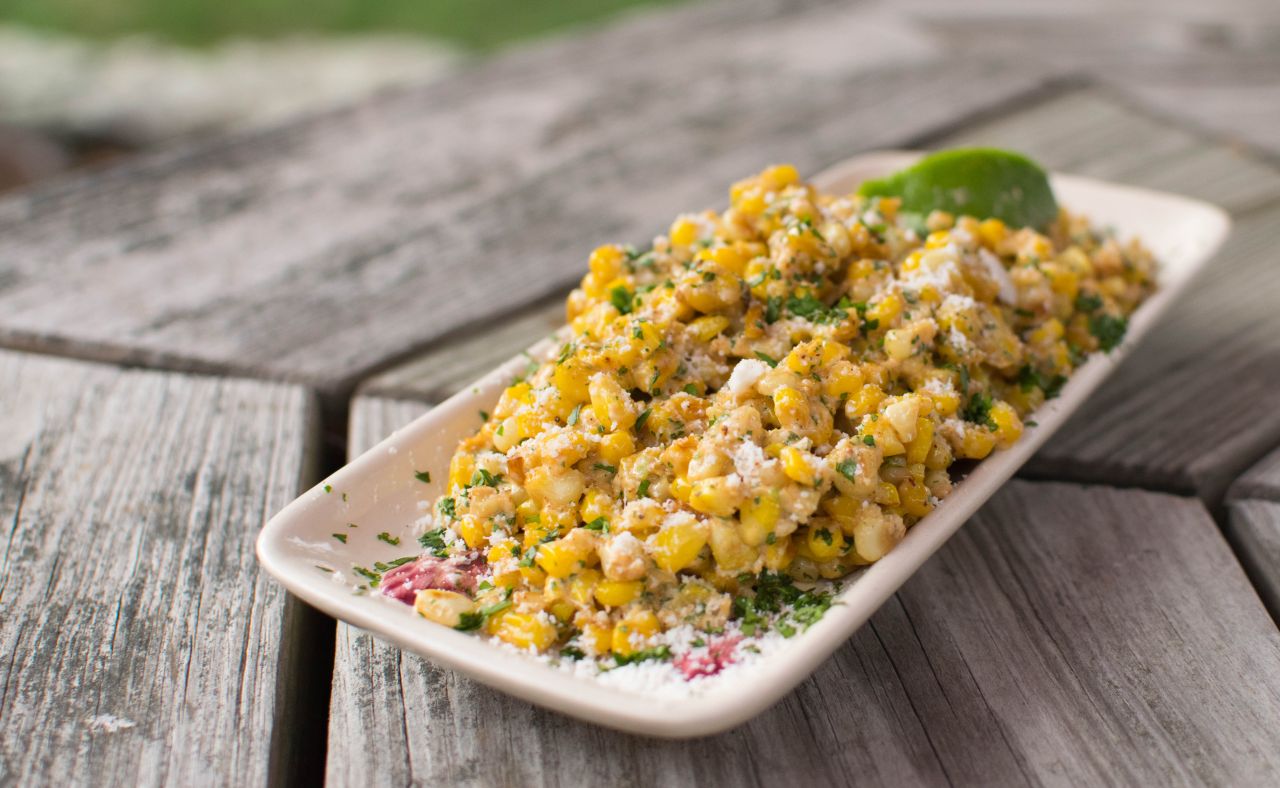