Today Samsung revealed the “second chapter” in smartphone technology. Dubbed ‘Infinity Flex Display’, it is set to power the first generation of foldable Galaxy smartphones – and we’ve seen the first one in the flesh. Here’s how it works.

For the past decade, the smartphone industry has been stagnant. While phone screens have become larger and the software powering them more sophisticated, the underlying concept has remained pretty much unchanged. In 2019 this is all set to change.

Foldable phones are an entirely new product category in mobile computing. As the name suggests, they have bendable displays that can be unfolded into a much larger form factor; essentially giving you a smartphone and a tablet in one device.

At this year’s Samsung Developer Conference (SDC), mobile president DJ Koh finally unveiled the technology and user interface and will make these products possible: Infinity Flex Display and One UI.

One UI is a “reengineered” design interface for Android that has been built to assist with one-handed operation. It does this by automatically ordering relevant content on the bottom half of the screen using simplified, readily identifiable icons.

In addition to reducing onscreen clutter and making navigation more intuitive, this will be an essential UI feature for unfolded phones. Without it, the screen real estate would simply be too vast to operate singlehandedly.

Infinity Flex Display, meanwhile, is the name for Samsung’s folding screen application. This will allow users to do things they couldn’t do with an ordinary smartphone with the larger, immersive display providing vast improvements to media playback and multitasking. For example, users will be able to use three active apps simultaneously. 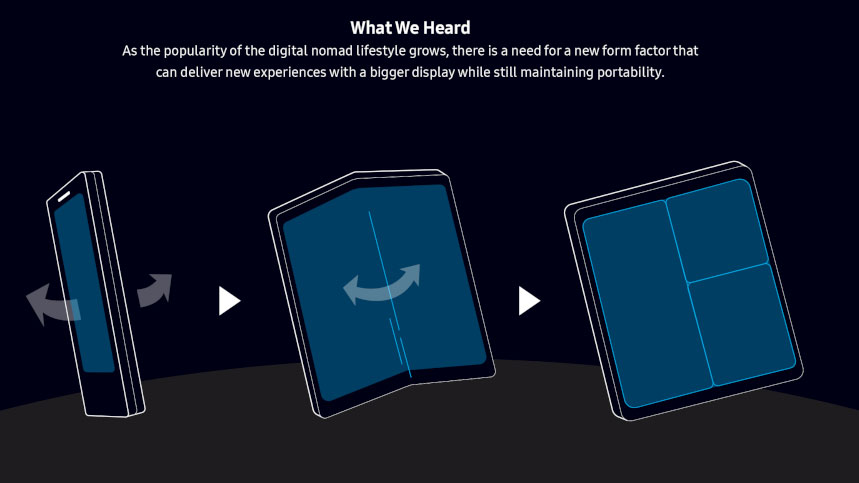 “The foldable display lays the foundation for a new kind of mobile experience. We are excited to work with developers on this new platform to create new value for our customers. We cannot wait to see where the technology and collaboration takes us,” Koh said.

Samsung has been working hard to ensure apps transition seamlessly from the smaller display to the larger display as the device unfolds. The company is also partnering with scores of third-party developers to ensure the platform is well stocked with applications when it launches.

“Developers are an integral part of how this new form factor will be realised, which is why we’re inviting developers to get involved from the start at SDC”, Koh said. “Samsung and Google want to work collaboratively with them towards an optimized foldable UX.” 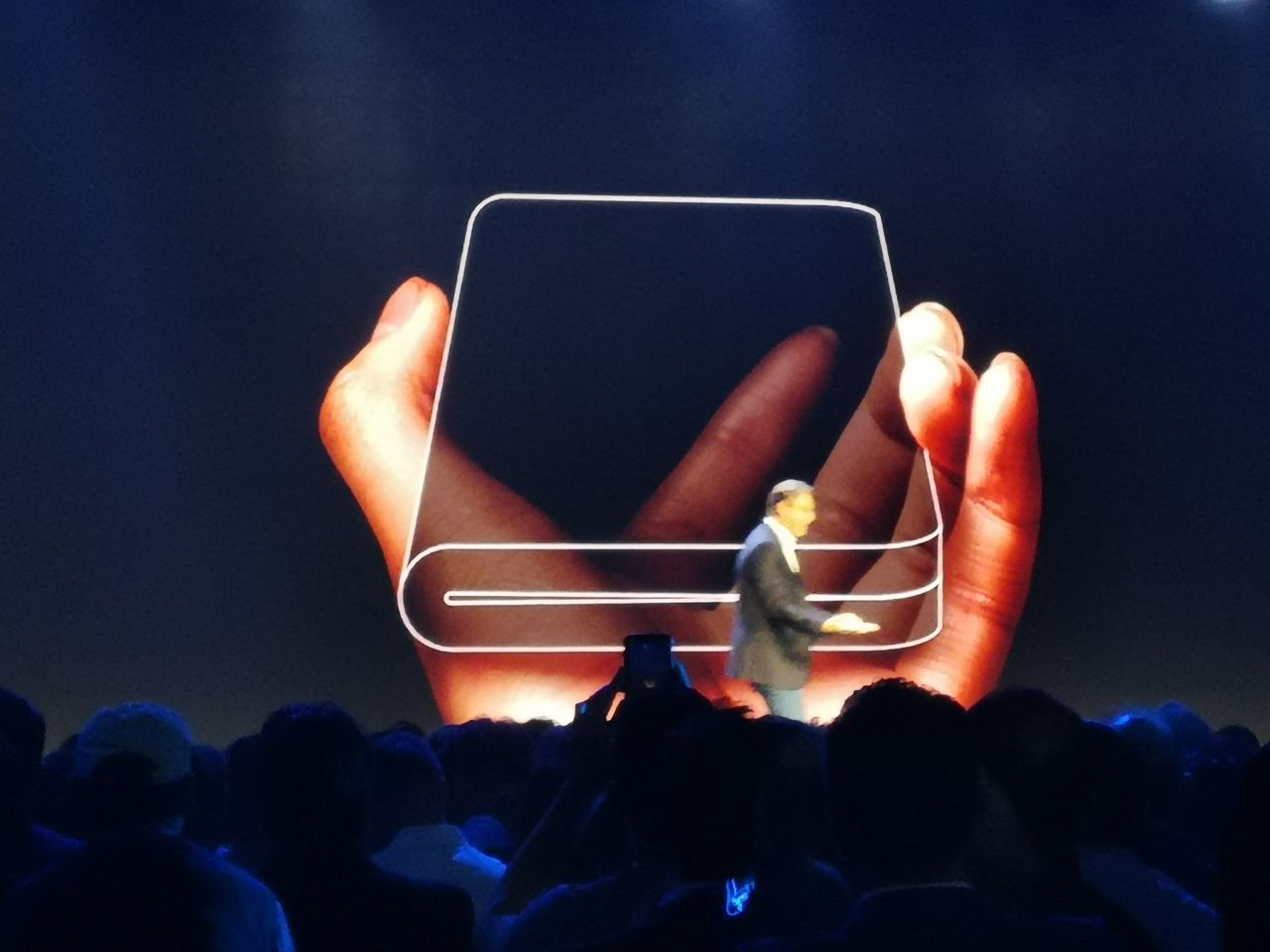 Samsung’s first folding phone is expected to launch in early 2019. Our money is on a March release to coincide with the tenth anniversary of the Samsung Galaxy brand.

Koh claimed that the new product was not driven by a desire to create something new, but to meet the existing needs of consumers. This makes sense when you think about it – most people want the largest smartphone screen possible and we’ve pretty much reached the limit of what’s feasible in a non-folding form factor.

To hear Samsung tell it, folding/flexible smartphone displays are destined to become mainstream, with the majority of models expected to boast a form of this technology in the years ahead. So far, we’ve only seen a decidedly dodgy looking Chinese model, but it’s safe to say that Samsung’s offering will be a lot more impressive.

Intriguingly, Samsung claimed to also be working on a whole range of Infinity Flex Display prototypes, including screens that unroll like toilet paper! Whether any of these concepts will make it to the final production stage is currently unknown.

If the leaked videos are any indication, this technology isn’t ready for prime time just yet. See for yourself below.”] 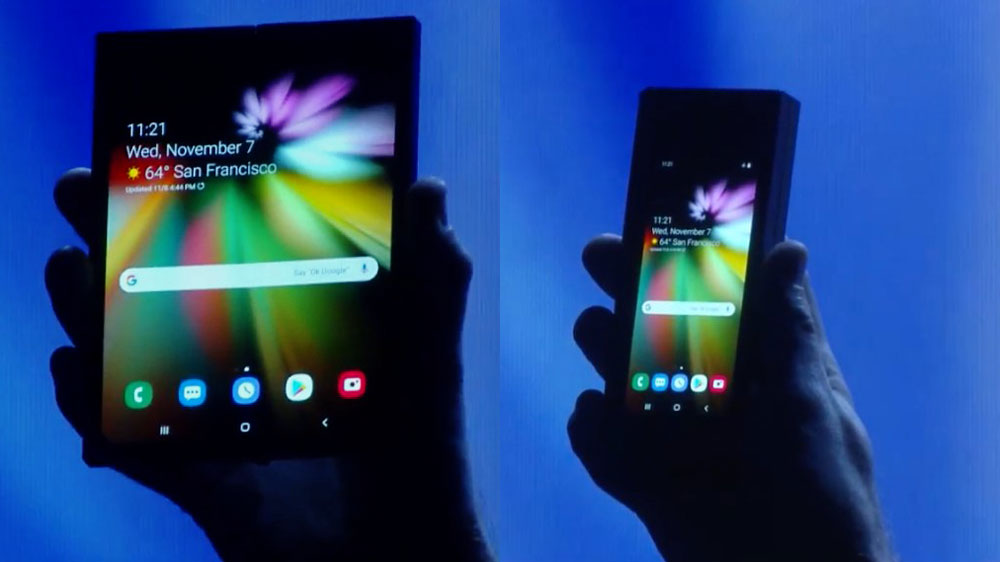 Samsung’s currently nameless debut model – erroneously referred to as the ‘Galaxy X’ – was briefly shown off during the SDC keynote. We can confirm it folds inwards and boasts a third OLED on the outer side with full smartphone functionality. When unfolded, the screen measures a tablet-esque 7.3 inches. We only saw the device for a few seconds.

My first impression is that this thing is thick – really thick – but that’s to be expected. On the plus side, it still fits easily inside a jacket pocket. Nevertheless, I think this thickness will still turn off many prospective customers and Samsung itself is partially to blame. (It’s been drummed into us for years that ultra-thin smartphone are best.)

While Samsung is the first major manufacturer to reveal an official product in this space, other vendors aren’t far behind. Huawei, LG , Lenovo and Apple are reportedly working on similar concepts of their own.

Lifehacker travelled to SDC as a guest of Samsung.