Organise Your Photos With This Windows App

collectionexiforganizephotographyphotoswindows
To sign up for our daily newsletter covering the latest news, hacks and reviews, head HERE. For a running feed of all our stories, follow us on Twitter HERE. Or you can bookmark the Lifehacker Australia homepage to visit whenever you need a fix.

Windows: I wouldn’t be surprised if you have have folders upon folders of photographs that you swear you’ll get to sorting “someday”. For me, that day was this weekend. For whatever reason, I felt like spending a few hours trying to tackle my lifetime of photographic history that I’ve dumped into a big “To Sort” folder on my network-attached storage device.

I was dreading the task, because I find programs like Lightroom or Capture One stressful. While they make it incredibly easy to organise your photos by their EXIF data — when or where they were shot, what camera you used, et cetera — figuring out the nuances of cataloging, and how to make your virtual folders or filters map to real folders on your computer or storage device, gives me a headache.

That’s why I was thrilled to stumble upon the Windows app PhotoMove, which has been a lifesaver for my messy archive of pictures. The free version does a thorough and speedy job of analysing wherever it is you keep your photographs, reading any and all EXIF data, and automatically creating and moving (or copying) your pictures into folders. The app takes almost no time to install and is easy to figure out—much faster than it would take to learn the ins and outs of a true cataloging app, which you could (or should?) still use. 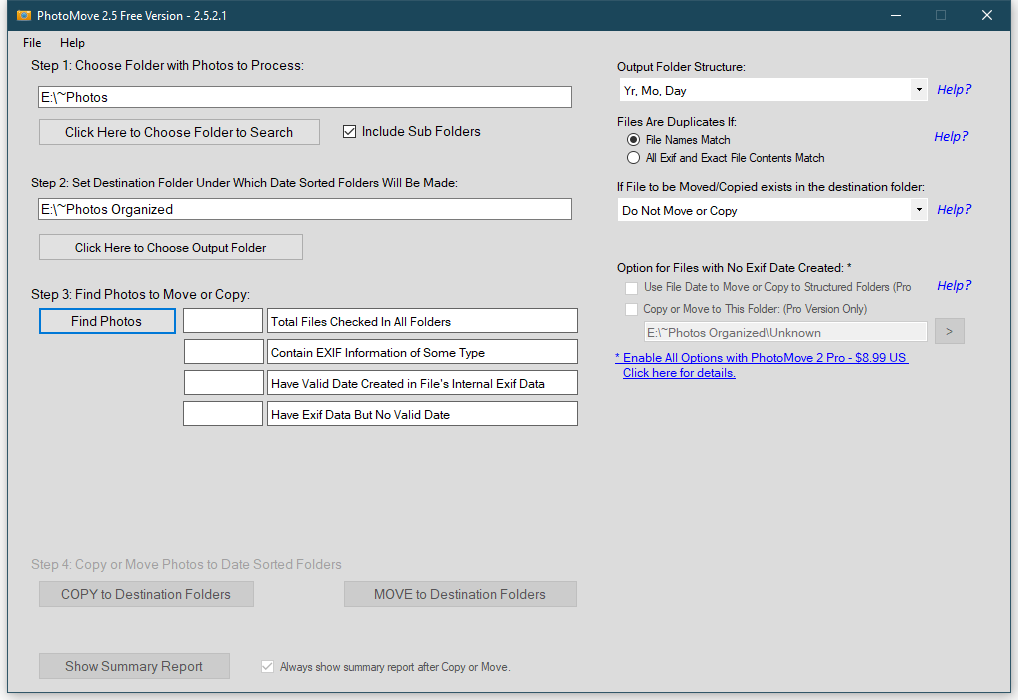 There aren’t a lot of settings to adjust in PhotoMove’s free version, but they’re important. First, you pick the folder you want the app to analyse (and include subfolders!), as well as the destination folder where your photos will eventually go—the new folders PhotoMove creates, too.

You only get two folder structures to pick in the free version of the app, and this granularity — sorting images into folders based on the year, month, and date when you shot them—could get annoying. There’s an easy fix for that, though; once you go through the process and PhotoMove makes a ton of folders based on the dates pictures were shot, you can just go to their parent folder in File Explorer (the month), do a wildcard search (“*.*”), and move every photo Windows finds up to the month (or year) folder, depending on your personal preference.

The one feature that might convince me to purchase PhotoMove’s pro version ($12.50) is its duplication finder. In other words, if PhotoMove detects that two images have the same name or matching EXIF data—your preference—the app’s paid-for version can automatically rename the duplicates, have the duplicate overwrite the original, or move the duplicate to a special “you’ll want to look at this manually” folder. If you’ve been bad about keeping your photos organised, this could save you a ton of time.

Finally, PhotoMove can also work a similar kind of magic when it can’t detect any EXIF data in your photos. If that’s the case, it can just move the photos to organised folders based on when the files themselves were created—not the worst idea—or move all of these photos to a sepcial “Unknown” folder. You’ll need the pro version of the app for these features, but $12.50 isn’t a lot to ask for these conveniences.

As for my organisation session, I was thrilled that PhotoMove was able to handle around 90 per cent or so of my sprawling photo library without issue. The photos it couldn’t address — and I had a feeling which these would be—didn’t take me that long to manually move into the right folders. At least, it took me a lot less time than it would have been to try to organise all 25,000 images from scratch.