Buying a vegan roast is very much like playing tofu roulette. Your options ping-pong between “legitimately tasty” and “old boots with a whiff of sage”. If you’re sick of the usual faux-meat options, I have great news: You can totally make your own.

Imitation meat gets a not-entirely-undeserved bad rap, but some of it kinda rules. Mock duck, which is essentially seitan seasoned with five spice, MSG, and sugar, is my favourite. Some varieties are canned, but I think the best kind is moulded into a weirdly anatomically correct shape – complete with drums and little riblets – and sold in the frozen section.

Texturally, it strikes the perfect balance between springy and chewy; flavour-wise, it’s super savoury, but all that sugar helps it develop a caramelised crust when fried. All in all, mock duck beats the pants off of your average seitan turkey, and it’s the perfect starting point for a festive vegan roast.

However, if you tie two stuffed vegan duck halves together and toss it in a hot oven for an hour, you might as well go chew on a vegan leather jacket. Steam is the best way to keep wheat-based faux meats moist and tender, but it won’t give you the burnished crust that you really want in a holiday roast. Solving this problem turned out to be pretty easy: rather than force one vegan meat to be simultaneously moist and crisp, why not get a second vegan meat involved – one that’s actually designed to crisp up in hot oil?

Enter mock goose, which is just sheets of tofu skin seasoned with that triple threat of five spice, MSG, and sugar. It’s usually sold in little folded-up parcels, but carefully peel apart the layers and you’ve got a surprisingly skin-like barding material. Wrapping the stuffed duck halves in mock goose, steaming it in the Instant Pot (or on the stove), and then pan-frying the whole deal gives you everything: Moist stuffing, perfectly-cooked “meat”, and salty, crackly skin. It’s the vegan roast you deserve. 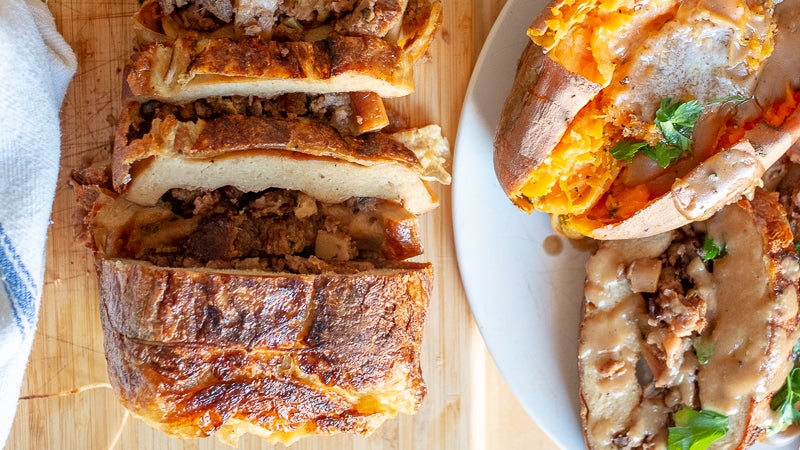 Mock duck and goose can be found in the freezer section of most Asian supermarkets. (My market sells Everbest brand mock goose, and I think the mock duck I use is from the brand “Vegetarian Food,” but May Wah Market lists the manufacturer simply as “Company F.“) If you’re not near an Asian market, you can order the duck and a vegetarian mock goose from May Wah online.

I’ve included recipes for stuffing and gravy here, but I encourage you to use your favourites. If you usually add eggs to your stuffing, though, set a few scoops aside for the roast before mixing in the eggs; they add too much moisture for something that gets almost entirely cooked in steam.

First, make the stuffing. Heat the oil (or butter, for vegetarians) in a skillet over medium heat, then add all the vegetables and cook for 25-30 minutes, stirring frequently. When the vegetables are super soft and lightly browned, add the bread cubes, walnuts, and herbs. Mix thoroughly and season to taste with salt and pepper.

Off the heat, stir in the stock a half-cup at a time. Only add as much as the bread cubes will absorb — this roast gets steamed, not baked, so you

don’t want overly wet stuffing. Allow to cool while you assemble the roast.

Lay a sheet of heavy-duty aluminium foil on a large cutting board or rimmed sheet pan. Place a slightly smaller sheet of parchment on top of the foil, then cut four or five foot-long pieces of twine. Arrange them parallel to each other on the parchment. 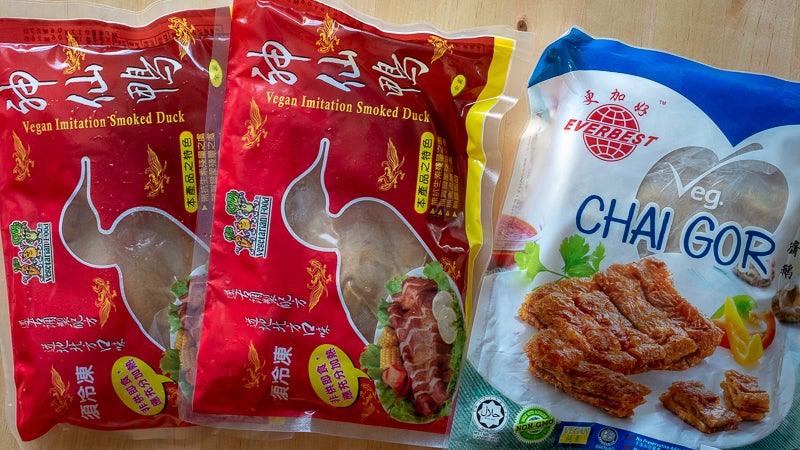 These are the vegan meats I used. (Photo: A.A. Newton)

Remove the smoked mock duck halves from their packaging and pat dry on paper towels. Heat two tablespoons of neutral oil in a large nonstick (or cast-iron) skillet over medium-low heat. Fry each duck for 3-5 minutes a side until caramelised and golden brown. Set aside.

Unwrap the mock goose and remove any toothpicks holding the sheets together. Carefully unfold to a single or double layer and place on top of the twine. The goal is to completely wrap the duck halves in one or two sheets of the goose; this takes some finessing, so work slowly and patiently. Unfold more sheets as needed, and cover any tears with scraps.

Place one of the duck halves, concave side up, on the centre of the goose sheet. Add roughly one cup of stuffing, compressing it with your hands or the back of a spoon if needed. Place the other half on top, concave side down, to make a little faux-meat package. Wrap the goose skins over the duck halves, then secure as tightly as you can with the twine. Be gentle, but don’t panic if the twine tears the goose a little bit. It’ll glue itself back together as it steams. 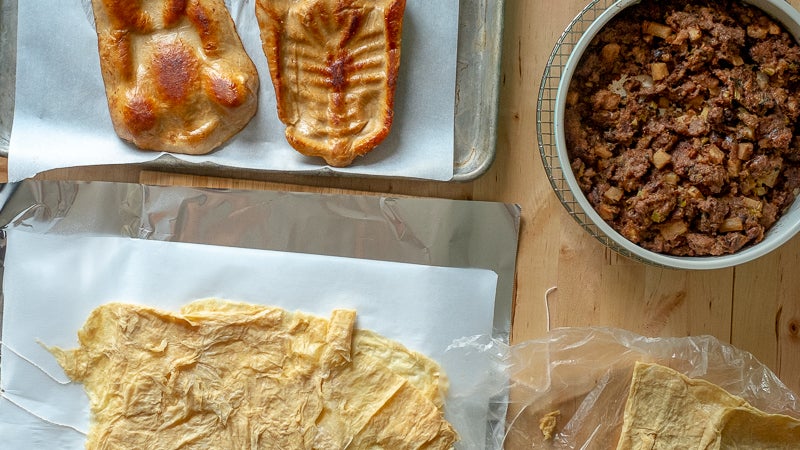 All the component parts, ready to roll. 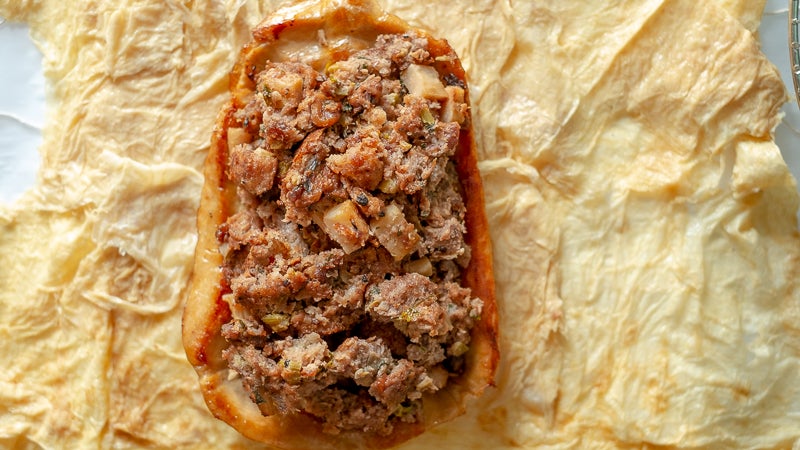 Place one half-duck in the center of the Sheet of Fake Goose and fill ‘er up with stuffing. 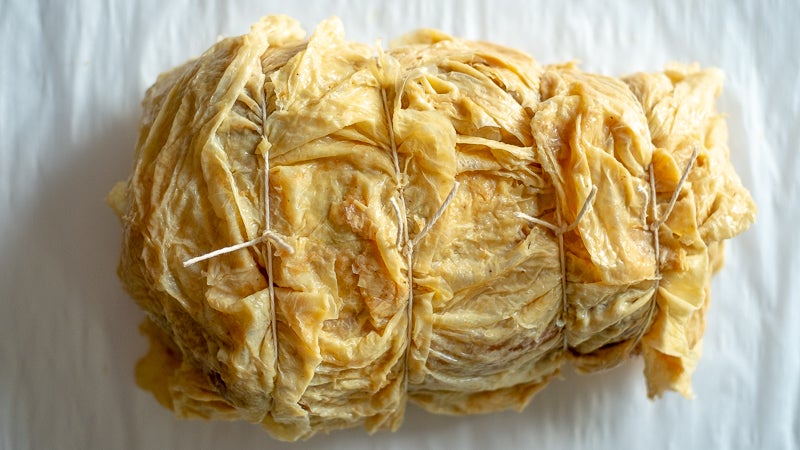 Does this look like hell? Oh, most definitely—and it’s gonna get worse before it gets better. 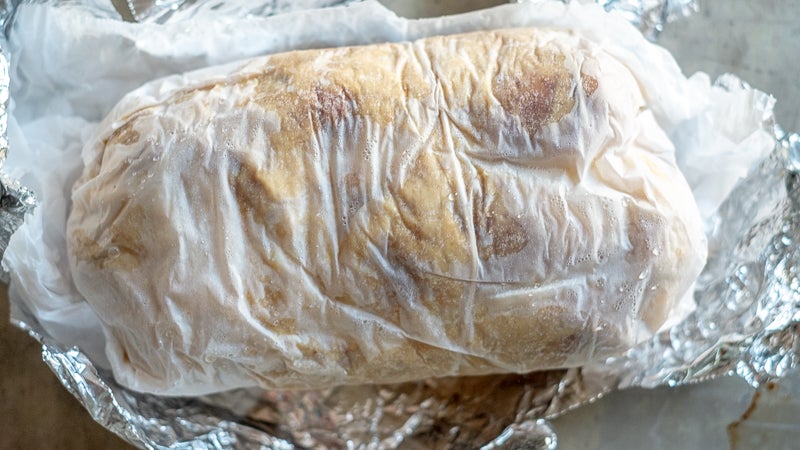 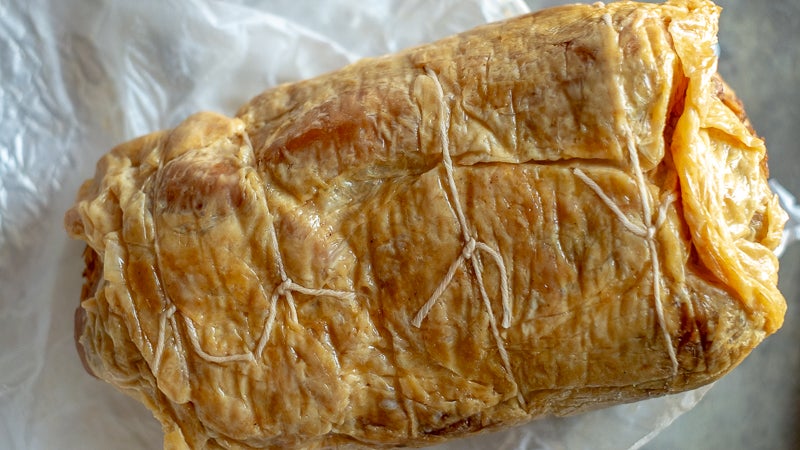 You should now have a deeply unappetising little parcel. Wrap it up tightly in the parchment, then wrap it even tighter with the foil and seal completely. Place in the steamer rack of an Instant Pot or other electric pressure cooker, add a cup of water, and seal the lid. Steam under high pressure for 25 minutes, then release the pressure manually and rest in its wrapping for 20 minutes to an hour. (If you don’t have a pressure cooker, 40-45 minutes in a steamer basket on the stovetop should do it.)

While the roast steams, make the gravy: Heat two tablespoons of olive oil (or butter) in a small saucepan over medium heat. Add the flour and cook, stirring constantly, for 15 minutes. When your roux is the colour of milk chocolate, add the stock little by little and whisk to combine. Bring to a boil, then reduce heat and simmer until thickened, ten minutes or so. Season to taste with salt and pepper, and keep warm until ready to serve.

Finally, heat another tablespoon of oil in the same nonstick skillet over medium-low heat. Unwrap the roast, discard the foil and parchment, and carefully transfer to the skillet. Fry for about two minutes per side, until the mock goose skin puffs and crisps and turns dark golden brown. Be sure to brown those sides, too. 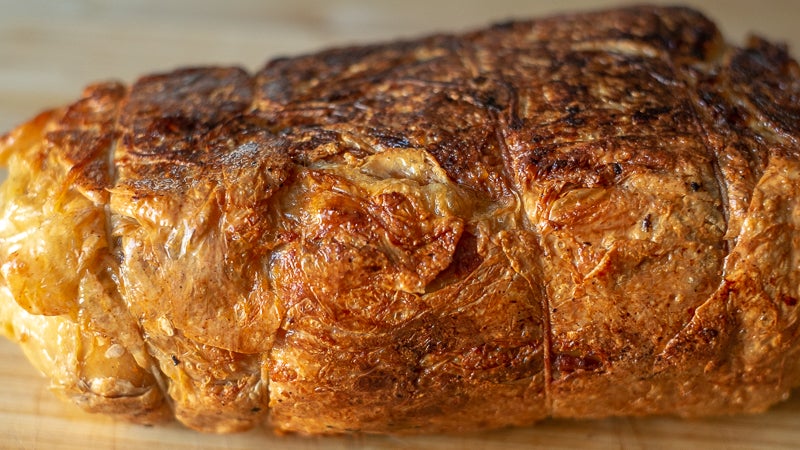 Transfer roast to a cutting board and carefully clip the twine with kitchen shears. Slice into 1.2cm thick slabs and serve with gravy, mashed potatoes, and more stuffing.