How To Keep Your Dog From Destroying The Environment

Dogs are humans’ best friends, immeasurable bringers of joy to all around them and the only good content left on the internet. They’re also a huge strain on the environment. Yes, I am here to be the total bummer to tell you that those good boys and girls and loveable fur faces have a gigantic carbon pawprint that leads to more greenhouse gasses being pumped into our air, poison washing into our waters and toxic chemicals entering our mouths.

Australia is home to about 4.8 million pet dogs, according to the RSPCA, and all that food, waste and care can be ruff (sorry) on the planet.

The good news is, there are ways you can mitigate the effects of dog ownership — and one major way to feel better about it from day one.

Like all life forms of domesticated life that don’t hunt and forage for their food in the wild (that of course includes you, human), feeding a dog requires factory farming. You probably know by now that your love of meat is killing our planet, and your confusing ethics about which animals are OK to eat is may or may not be terrifying your dog into thinking you will one day turn your flesh-lusting eyes in their direction.

In fact, if cats and dogs formed their own country (which is surely the plot of own of those low-grade Pixar knockoff animated movies), it would be the fifth largest consumer of meat on the planet, according to study results released by UCLA.

One estimate in a 2009 study by New Zealand’s Victoria University of Wellington found that owning a pet dog is equivalent to owning two SUVs.

“Owning a dog really is quite an extravagance, mainly because of the carbon footprint of meat,” John Barrett of the Stockholm Environment Institute told New Scientist Magazine.

Together, dogs and cats produce the equivalent of about 64 million tons of carbon dioxide per year, about the same impact as driving 13.6 million cars per year, according to the UCLA study. Dogs make up more than half of that impact, since their food tends to be higher in protein.

What you can do about it: The good news is that, unlike cats — who are actually obligate carnivores — dogs do fine with a vegetarian diet.

“A dog doesn’t need to eat steak,” UCLA geography professor Gregory Okin, who conducted the UCLA study, said when the study was released. “A dog can eat things a human sincerely can’t.” 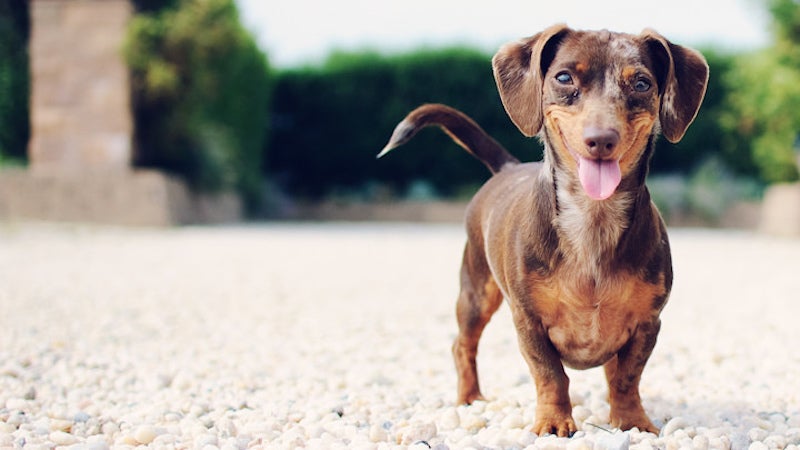 Should You Switch Your Dog To A Vegetarian Diet?

Dogs are omnivores, like humans are, so they can technically survive on a vegan or vegetarian diet, and some even need to in order to address health issues. But transitioning to a meat-free diet isn't right for every dog, so you should consider the following factors before switching your dog to a meat-free diet.

Switching your dog to a no- or low-meat diet will help reduce the carbon pawprint; so will opting for locally made foods to cut down on transportation costs.

The National Resources Defence Council recommends shopping for ingredients that include secondary products, like animal bone meal or organ meat; those byproducts are recycled nutrient- and energy-rich foods that are less impactful than human-grade meat production.

You can also just make your own pet food, if you’re into that.

The scoop on poop

All those poops pile up — to the potential detriment of all of our health. Dog droppings can have exponentially more faecal coliform than a cow per pound of body weight, according to environmental organisations.

“A single gram of dog faeces can contain 23 million faecal coliform bacteria, which are known to cause cramps, diarrhoea, intestinal illness and serious kidney disorders in humans,” Dena Krebs, a spokeswoman for the aptly named DoodyCalls pet waste management service, told Lifehacker over email. “EPA even estimates that two or three days worth of droppings from a population of about 100 dogs would contribute enough bacteria to temporarily close a bay, and all watershed areas within 32km of it, to swimming and shellfishing.”

An EPA spokeswoman pointed me to one of the agency’s fact sheets that notes dog waste doesn’t simply decompose and go away, which is why the agency asks every municipality to create guidelines regulating its proper disposal.

When poop is left untended in the streets, it can get caught up in stormwater or other runoff water and eventually make its way to a storm drain. That’s where it can do damage, as Jon Devine, a senior attorney at the National Resources Defence Council’s water program, told me.

“The major concern with animal waste is that it is nasty stuff in it that can either make you sick or make the environment sick,” Devine said. “Animal waste, like human waste, contains bacteria and viruses that if it gets into water bodies that people use can give them all kinds of nasty things, the most common of which is stomach flu.”

So if you’re downstream in the water from where rain or other water washes out, you can ingest the bacteria or viruses just by swimming, kayaking or using the water in any way. Since 1991, the EPA has listed it as a nonpoint source pollutant, putting it alongside herbicides, insecticides, oil, grease and toxic chemicals.

The other issue is that the waste can help kill animal life in those waters. Dog waste releases nutrients in water that can lead to algae blooms in waterways or lakes — those big, pea-green blurbs of water that can take over the surface. They often suck the oxygen out of the water, which makes it inhospitable to plants and other kinds of animal life. RIP scenic fishing point, hello dog shit lake.

What you can do about it: Scoop that poop! Just as you wouldn’t take a crap on the footpath and walk away from it (I hope?), picking up after your pup is the easiest way to do your part to keep the nasty stuff out of the waterways. It’s unsafe to compost dog waste at home so the NRDC says throwing it in the trash is still the best option. You can also flush unbagged waste right down the toilet so it ends up in a treatment plant — the EPA actually recommends it.

It turns out spraying toxic chemicals all over your furry friend might be problematic. According to the NRDC, the chemicals in flea and pest control products can be “highly hazardous” to humans, and can cause damage to the nervous system and brain; they can also lead to cancer. Kids are particularly at risk thanks to their fondness for touching things and then putting their hands directly in their mouths.

What you can do about it: Check the NRDC’s list of flea and tick control products, which ranks them on safety. Generally, the group recommends steering clear of products with tetrachlorvinphos, propoxur, permethrin and amitraz. You can also try to stick to non-chemical pest control methods, such as regular baths, vacuuming and washing pet beds in hot water. Remember that just because something is labelled “natural” doesn’t mean it’s safe.

How to feel better from day one

Yes, owning a pet — just like being alive at all as a human — is necessarily a burden on the planet. But if this whole guide reads like a buzzkill to your puppy powered dreams, there is one way to feel better about owning a dog: Adopt!

The animals themselves aren’t really the culprits; domestication is. So it’s not their fault we’ve created a system of plastic poop bags and factory-farm produced, heavy-to-transport dry food bags to keep them domesticated. While breeders are out there creating new animals to care for, the animal shelters are full of entirely loveable, homeless animals waiting for a home.

About 130,000 animals enter the shelters every year, according to the RSPCA. Adopting a homeless dog is naturally easier on the environment than buying one from a breeder. Putting those pets down has its own environmental impact — and may cause hazardous, toxic flooding out of your tear ducts.