Why I’m Keeping My Bitcoin Despite The Crash

Early this year, I decided to set up a cryptocurrency investment portfolio, using money I could afford to lose. Since then, the total value of my portfolio has fallen by 60 per cent. Here’s why I’m holding on – and why you might want to consider buying bitcoin while prices are cheap. (Emphasis on ‘might’.)

There are lots of analyses that start with the phrase “There are two types of people in the world…” Anyone vaguely interested in the cryptocurrency markets would know that there are those that are fierce defenders of these new ways to store value and conduct financial transactions and others who see it all as fool’s gold and a get rich scheme that’s doomed to fail.

At the moment, it looks like the sceptics have got it right. Since the heady days of the week before last Christmas, when Bitcoin was trading at over US$19,500, the price has steadily fallen all year to around US$3700.

Bitcoin Is In Meltdown (Again)

Bitcoin isn’t the only crypto-coin that can be traded. And, while its value shouldn’t, theoretically, impact the value of other coins, Bitcoin tends to lead the entire market up and down. So, while there have been coins that have appreciated in value while Bitcoin has fallen, the majority of crypto-coins have followed the same pattern as Bitcoin.

But what’s behind this fall, and could the market recover? Let’s take a look at some facts.

A Brief History Of Bitcoin

From 2016 though to the early part of 2017, Bitcoin’s value steadily rose from around $400 to about $1000. For any trader, that represented a a solid gain. While there wasn’t a spectacular leap in value – that was yet to come – it made Bitcoin look like a reasonable investment.

By the middle of 2017 things changed. A combination of increased press coverage, an influx of new traders – not all operating on the right side of the law – and the emergence of many new crypto-currency exchanges created an environment where there were more traders with more places to conduct transactions. Many people, looking to enter the market while it was still relatively new plunged lots of money into Bitcoin and other coins.

By September 2017, the price has quadrupled, exceeding US$4000 and we were at the base of an exponential curve which saw the price almost reach US$20,000 before Christmas. 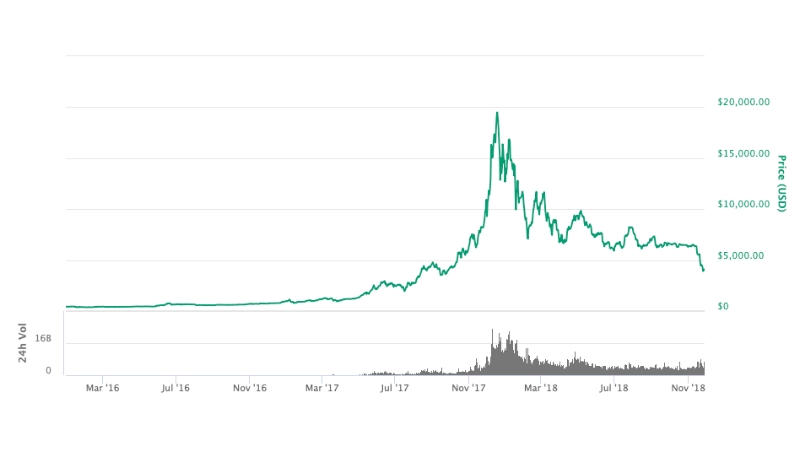 Unsurprisingly, the price didn’t stay at that level for very long. The Bitcoin bubble burst with the price dropping by two-thirds in fewer than seven weeks. And while there have been a couple of sojourns with the price rising to above US$11,000, it has been on a downward trajectory for most of 2018. But over the last couple of weeks, the price has fallen off a cliff from about US$6400, to under US$4000.

Interestingly, this isn’t the first time the value of Bitcoin has crashed. This chart shows that that this is the fourth time the price of bitcoin has plummeted by in excess of 80% before recovering. 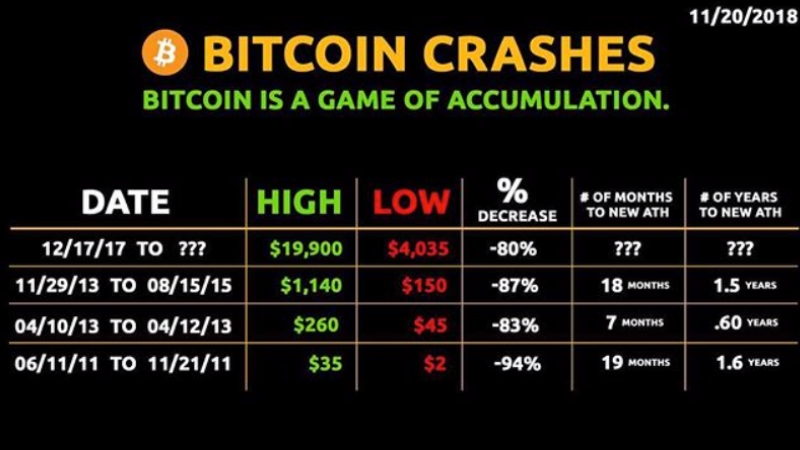 Over 2018, a number of significant events occurred that impacted the trading of cryptocurrencies.

In Japan, a significant case involving a hack on a major cryptocurrency exchange resulted in over AU$500M in compensation being paid and increased scrutiny and regulation on exchanges in that country. That hack, and others such as the Mt Gox attack in 2014 and an attack Bithumb this year have eroded confidence in cryptocurrency markets.

While local exchanges have escaped such attacks new laws for digital currency exchange providers operating in Australia were implemented by AUSTRAC. Those laws mean exchanges must register with AUSTRAC and meet the Government’s anti money laundering and counter-terrorism funding compliance and reporting obligations. Suddenly, things became a little more difficult for those working beyond the fringes of the law.

That type of regulation is appearing across the world.

The introduction of tighter regulation has also made the market more attractive to institutional investors and they are, typically, more conservative in their investor approach than short-term traders. That’s led to a change in the nature of trading activity. It also means that coins need to prove that they are more than just vehicles for holding value. They need, like shares, to show some value. For example, while Bitcoin may be a reasonable holder of value, XRP is working with banks to provide an alternative to US dollars as a tool for shifting money from one currency to another.

That combination of a loss of confidence in the market as a result of hacks, the increased difficulty for traders trying to use cryptocurrencies to either hide money or conduct illegal transactions and influx of institutional investors has changed the nature of the Bitcoin and other coin markets.

In other words, 2018 has been the year where the hype met reality.

What If You’re Holding Bitcoin Today?

Early this year, I decided to place a small amount of money in a cryptocurrency trading account with Coinspot. That $1500 account was spread across a number of different coins that I’ve occasionally changed. At the moment I’m holding BTC, XRP, STR, ETN, LTC, ADA, BCHABC and BCHSV.

My plan is to hang on for now. I’m not a financial adviser and I’m not advising anyone else on what to do. I approached cryptocurrency trading as an experiment and I was prepared to lose all the money I tipped into the account. If the market heads back to the levels of last December, I’d probably collect the gains and bail out. But for now, I’m holding on.

The question of what to do will depend on what price you bought in at, whether you think the market will recover and how exposed you are. There’s a lot of “expert” advice around but the reality is that the bitcoin market is still very new and no-one really knows what’s going to happen. Many analysts agree that nascent markets are volatile and what we’re seeing is to be expected.

Should You Buy In Now?

The temptation, when prices are low, is to use this as an opportunity to either expand your holding or enter the market. Certainly, many people has amassed significant fortunes by buying into markets during market crashes. But we really don’t know whether Bitcoin is in a death spiral that ends when the value hits zero or if this is a fall that will precede a new rally where the value appreciates. And so-called experts are divided. I’ve seen predictions suggesting bitcoin could reach US$100,000 or plummet to nothing.

If I was planning to buy some more Bitcoin, I’d only be using money I wasn’t depending on. If it was all lost, I’d be annoyed but not devastated. I’d buy in and forget about it for a while. Back when I first purchased some coins, I checked the value regularly and saw the price increase and decrease almost every minute. Now, I look at it as often as I look at my superannuation – maybe every month or so.

Given the speculative and volatile nature of cryptocurrency markets, it’s tough to give any definitive advice. My feeling is that a small holding is a good way to ensure that, if the market does go crazy again, you can make a few bucks. If my $1500 seed turned into a $10,000 tree I’d be pretty happy and would probably cash-out. That’s enough money for a nice family holiday.

The increased interest by regulators is a good thing in my view and means you can feel a little more confident that your money won’t disappear like it did for early investors in Prodeum, who found their US$11M gone and the website wiped other than the word “penis”.

Market crashes aren’t new. We’ve seen them hit the stockmarket many times and, each time, the market has not only recovered but exceeded previous levels. But cryptocurrencies are different. We don’t have three hundred years or so of history to look back on. And cryptocurrencies are not the same as shares.

A share in a company represents a piece of something that creates value. Most cryptocurrencies are tools for holding, not creating, value. And that’s important to consider. When you invest in a mining company, for example, you can look at what mines it operates, read about contracts and deals, check an annual report for financial performance and make an informed decision.

You can’t do that with many cryptocurrencies. There’s no annual report for Bitcoin and no easy way to know how it’s being used to create greater value for its holders. And perhaps that explains why the value is currently falling.