Data from business analytics company illion shows a record number of Australian retailers are going to the wall. Although relatively low as a percentage of all companies, the negative trend is worth highlighting given the laundry list of headwinds already facing the sector.

Multiple analysts agree that the near-term performance of the retail industry will serve as a critical test of the broader health of the Australian economy.

It’s no secret that Australia’s retail sector is doing it tough.

And as one of the most important industries in the Australian economy, it’s also a sector that’s watched closely by analysts.

That’s from both an employment perspective, and as a gauge for domestic consumption – the largest component of GDP.

In view of that, this chart paints a gloomy picture: 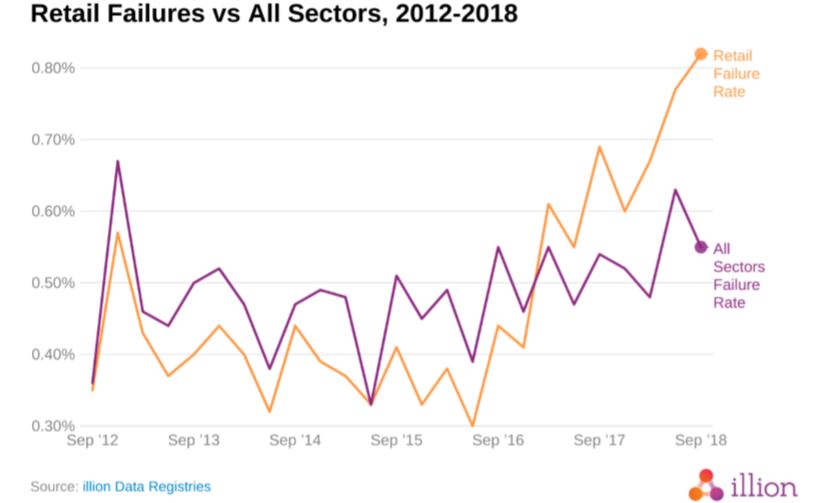 From business analytics company illion (formerly Dun & Bradstreet), it shows the net effect of all the headwinds facing the sector: in the 12 months to September, “Australian retailers are going bust in record numbers”.

Sure, the total number of retail failures still only amounts to 0.8% but the trend since September 2016 is yet another negative indicator for the sector.

“One of these alone would hurt growth, but all three is a tough combination, and the results are clear in our latest analysis.”

Retail sales actually held up relatively well through the middle of the year, but the most recent data for September missed expectations.

Given the challenging conditions facing the sector, the upcoming Christmas shopping season will serve as a key bellwether for the broader health of Australia’s economy.

Particularly as the RBA has cited consumption growth as a key area of uncertainty for Australia’s near-term economic outlook.

Already, analysts from Morgan Stanley and UBS have warned of a challenging environment this Christmas, with uncertainty about the impact of a negative wealth effect from falling house prices.

Across the country, illion said business failures increased across all regions in the September quarter.

This likely reflects Tasmania’s “robust economic performance over the past two years, via the benefit of population growth and a buoyant housing market”, illion said.

One of the most recent iconic Australian retail names to fall victim to those tough conditions was Roger David, which announced it had gone into voluntary administration in October.

The 76-year-old company said it couldn’t compete with global retailers and the rise on online competitors.

It was the latest in a string of companies to go under, including Marcs, Pumpkin Patch and Payless Shoes.

And earlier this year in May, the Australian division of Toys ‘R’ Us moved into administration after a plan to sell the company fell apart.

However, Bligh said it’s not all bad news — particularly for bricks & mortar retailers with a business model that can be resilient through the current downturn.

Companies that can stay afloat “will see this as an opportunity to expand their business and service offerings”, he said.

In addition, “the peak shopping season is here and we’re finally seeing some signs of a pickup in wage growth, which should boost consumer confidence”.