Roy Morgan Research has released its figures for Australian takeaway consumption in 2018. The report includes the average number of takeaway visits per month and the ten most popular chains in the country. While the featured restaurants aren’t surprising, the ordering did cause us to raise an eyebrow. Domino’s Pizza and Subway aren’t as popular as you might think.

Despite an increased national push for healthier food options, it would appear fast food is as popular as ever. Approximately 55 per cent of Australians visit fast food restaurants at least once in an average four-week period. This figure almost triples when concentrating on McDonald’s customers, who indulged in their favourite takeaway an average of 2.7 times per month.

Below are the ten most popular fast food brands in Australia, ranked by visitations in the past six months: 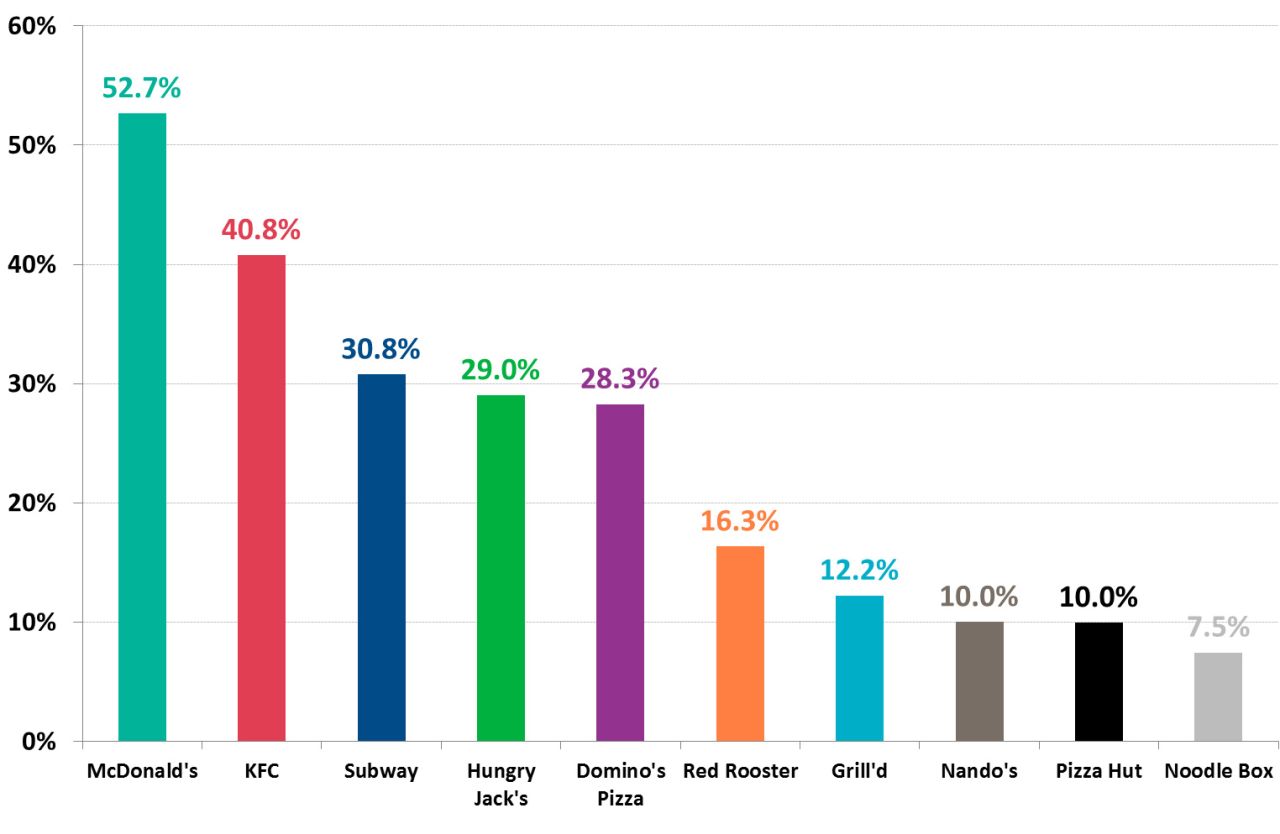 As you can see, McDonald’s is still Australia’s takeaway franchise of choice. Over half of Australians aged 14+ ate McDonald’s food in this time period. KFC was second on 40.8 per cent.

Here’s how the figures break down:

Old favourite McDonald’s is Australia’s leading quick service restaurant with over half of Australians, or 52.7%, eating at or having McDonald’s take away in an average six months, almost 12 percentage points ahead of second placed KFC on 40.8%.

Jostling closely for third place are three quick service restaurants at which just under a third of Australians eat at or have take away in an average six months with Subway on 30.8% just ahead of both Hungry Jack’s on 29.0% and Domino’s Pizza on 28.3%.

We would have thought mounting competition from Subway and Nandos would have made a bigger dent in McDonald’s figures, but it seems many of you are still enamoured with the Big Mac. We were also surprised by the relatively low placement of Domino’s Pizza. When you consider its flexible home delivery system and sophisticated online presence, one would expect it to place much higher.

According to Roy Morgan Research, McDonald’s high placement can be put down to the affordability of its food, extended opening times, large number of drive-through outlets and brand loyalty. The launch of its mobile app has also made ordering easier and quicker for customers.

Taste Test: These People Have Never Eaten A Big Mac

Meet Hayley, Tiffany and Quang -- three typical 20-something millennials. In addition to working for Allure Media, they share something else in common. none of them have ever eaten a Big Mac. No, really.

Now, it’s worth noting that “most visited” doesn’t necessarily mean “favourite”. Most people prefer a hearty breakfast to plain toast but grab the latter with more frequency because it’s easier and cheaper. However, the above fast food franchises are all pretty similar in terms of cost and convenience, with the exception of Grill’d and Nandos which are slightly more upmarket.

For your interest, here’s how the rankings compare to Roy Morgan Research’s report from 2013: