How To Blow Off Weddings, Funerals And Other Major Milestones 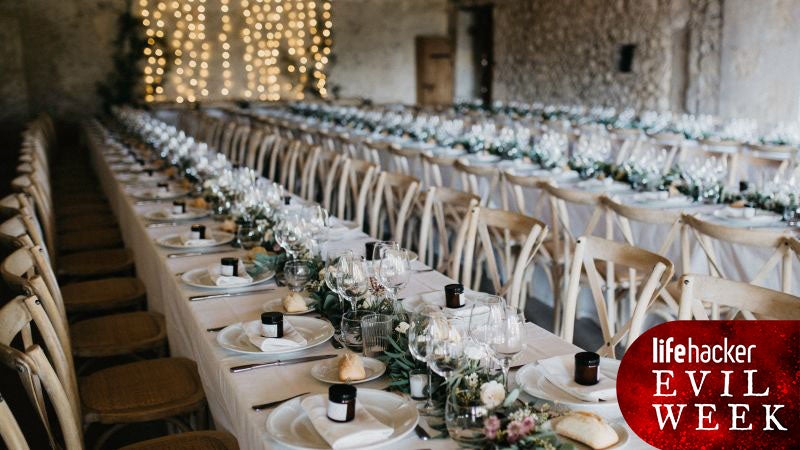 In an ideal world, maybe you'd love to spend a large portion of your free time attending the weddings, birthdays and other life cycle events of your nearest and dearest. But life, work, and geographical boundaries often get in the way, making it a tricky a proposition to attend every single milestone event for every single close friend and family member.

It's Evil Week at Lifehacker, which means we're looking into less-than-seemly methods for getting shit done. We like to think we're shedding light on these tactics as a way to help you do the opposite, but if you are, in fact, evil, you might find this week unironically helpful. That's up to you.

So how do you decide when you absolutely have to go, and when it's reasonable to skip? And what can you do to soften the blow of a "no"?

We checked in with etiquette experts and people who've been in these thorny situations for some advice. (Keep it bookmarked as wedding invites start piling up in the coming months.)

Daniel Senning, of The Emily Post Institute (and great-great grandson of legendary etiquete expert Emily Post), says that although it's something of a cliche, it's true that "practicality is the heart of good etiquette."

You simply can't make every event, and you have to be pragmatic about which ones you can and can't attend. People should understand that.

"When I lived in California, and my brother was in Vermont, he didn't expect me to attend his kids' birthday parties or even all the holidays," Sennings says. "You just have to pick and choose."

Sometimes you've been invited to one wedding after another, and you simply don't have the vacation days or the budget to accommodate them all. If it's a matter of triaging between which events to skip and which to attend, says Senning, "Keep an eye on which events you've gone to for this person; if you haven't gone to much in a while… try to [make it]."

"I'm an expat with two kids under four so I miss stuff all the time," says Rebekah, 38,who's originally from Australia, and now lives in New York with her family. "We go to as many weddings as we can and if we can, we prioritise seeing people in the months before they die vs. the funeral."

Plus, she says, "It helps if we can build a vacation around the special event."

The takeaway: Plan well in advance and do some serious studying of your calendar so you can figure out what's most reasonable to skip and to attend.

Gauge the Relationship, the Event's Importance, and 'Reverence'

"We will bend over backwards for our parents and siblings and very close friends, and everyone else we do what we can," says Rebekah.

Depending on how far you live from the person who's invited you, that's a useful rule of thumb for most of us — closer relationships will almost always take top priority.

"The way you gauge whether or not you go to a friend or family member's event is the relationship," concurs Diane Gottsman a national etiquette expert, author of Modern Etiquette for a Better Life, and founder of The Protocol School of Texas. "If it's a very close friend, even if you have to move Heaven and Earth, you should go."

"People remember the way you handle weddings and funerals specifically," she adds. "They will always remember who showed up and and who didn't."

That said, your decision whether or not to go isn't necessarily just about how close you are.

"Two great barometers are the relationship you have with them personally or the reverence you have for the individual," says Elaine Swann, a California-based etiquette expert. "If it's a third cousin, but you have an incredible relationship and you're very close, then by all means go. And if it's an event for a grandmother you never see, but who's the matriarch of the family, that's where the reverence come in." That "reverence," or respect, takes precedence sometimes, especially when it comes to elderly relatives.

That said, if someone gets so angry at your decision not to attend that they stop talking to you completely, that doesn't necessarily mean you were wrong and they were right. "Sometimes you have to realise that if it wasn't this thing that upset them, it would have been something else… It's not about asking forgiveness from people, it's about asking them to understand," says Gottsman.

Send Gifts…Most of the Time

The only event that you absolutely must send a gift for regardless of whether or not you attend is a wedding, says Senning. "Otherwise, oftentimes a card or a note is fine," he says.

Depending on how close your relationship is with the family, you may want to send a gift for a special event you can't attend, says Gottsman, who adds, "There's no specific dollar amount to give. It really should just be what you're comfortable with."

And if you can't make a funeral or a graduation, specifically, a heartfelt note is in order. "Make sure to personalise it and make it special," Gottsman adds.

The decision of whether or not to send a gift for a graduation will also depend on the closeness of your relationships. If you're close family members or friends but simply can't prioritise going, send a gift. The amount of money you spend doesn't matter as much as sending something that's thoughtful.

If You Decide Not to Go, Keep Your Regrets Simple

While it's tempting to explain in great detail how you've come to your decision not to attend someone's event, less is certainly more here.

"We were living in London when we got married in Napa," Rebekah explains. "Really close friends told us that they couldn't come because they expected the flights to be about £600, but they were £800. They basically put a price on our relationship and it was £200. I didn't stop talking to them but I was disappointed for years afterwards." In this case, offering specifics made the decision not to attend more hurtful, not less.

On the other hand, "saying, 'we'd love to come, but just can't get there right now' is totally acceptable," says Rebekah.

Plus, "there's a difference between a reason and an excuse," says Senning. The difference depends on your sincerity. "If you're trying to excuse your behaviour, or let yourself off the hook, it comes off as an excuse," he explains, "but if you're genuinely explaining why you can't make it, that's a reason."

"I learned to never give excuses when people did share theirs for my bridal shower and some of them were ridiculous to me," says 42-year-old Kristen, who lives in Brooklyn. "What is important to you might not seem important to someone else, so rather than risk hurting their feelings, I just tell them I'm so sorry that I won't be able to make it."

Instead of trying to build a case for your absence and offering too many details, Gottsman agrees, "You can just say: 'I'm so sorry I can't make it to your wedding, but there are some financial reasons I just can't do it. And I hope you understand. If I could, you know I would be there for you.'"

And, although it should go without saying, don't lie. "Always be honest. One lie begets another and begets another. Instead, keep it simple, don't pile on excuses or reasons," says Swann.

You should share your regrets both with the honoree and the person planning the event if you think that's more considerate, says Senning.

"And be sure the person planning it knows before you start telling others," says Swann. You don't want them to hear the news from anyone else but you.

Plus, Swann adds: "Try to tell them in the most personal way possible. Avoid texting — it may be too informal and feel removed. You want to send a heartfelt email or a phone call."

"One thing that gets me in a pickle is that I always want to go to more than I can so I de facto procrastinate saying no, which is the worst," says Dana, 38, who lives with her two children in Brooklyn. In an effort to be more considerate, she adds, "I always try to be more realistic and make the decision far in advance so that the inviters get plenty of notice."

Do your best to make and communicate your decision rather quickly, and in the case of a wedding, well before the date which the response card requests.

"A non-answer is not an effective no," agrees Senning. "It's ok to tell them no, but the question mark is much more difficult for a host to manage."

While attending events can be expensive and take quite a bit of effort on your part, in most cases, you'll be glad you spent the money and made the effort.

"You're never obligated to do anything, and can make any choice you want in your life, but think of it as an opportunity," says Senning. "How often do you see your sister or uncle or mother or father, even?"