The 6 Most Important Announcements From Apple’s October 2018 Event

At Apple’s big October event today, the Mac-maker announced revamped versions of three products, two of which haven’t received this kind of treatment in a long time. Apple has only made the slightest upgrades to the Macbook Air since it was last redesigned in 2013, and there hasn’t been a new Mac Mini since 2014. There’s also a new and interesting update to the iPad Pro, if you’re looking for a device that straddles the line between laptop and tablet.

Everyone knows that the iPhone is the crown jewel in Apple’s lineup of products, but its second wave of announcements was nothing to sneeze at, either. Here’s the rundown.

How To Pre-Order The New Macbook Air And IPad Pro

Apple just announced a suite of new computers — new iPad Pros, Mac Minis, and a new Macbook Air. (We’re very excited about that last one). All of these shiny chrome devices are coming soon, hitting stores next Wednesday, November 7. Conventional wisdom dictates waiting for reviews before picking up new gear, but maybe you’ve been waiting to pick up your next tablet or laptop and want to pre-order it now. 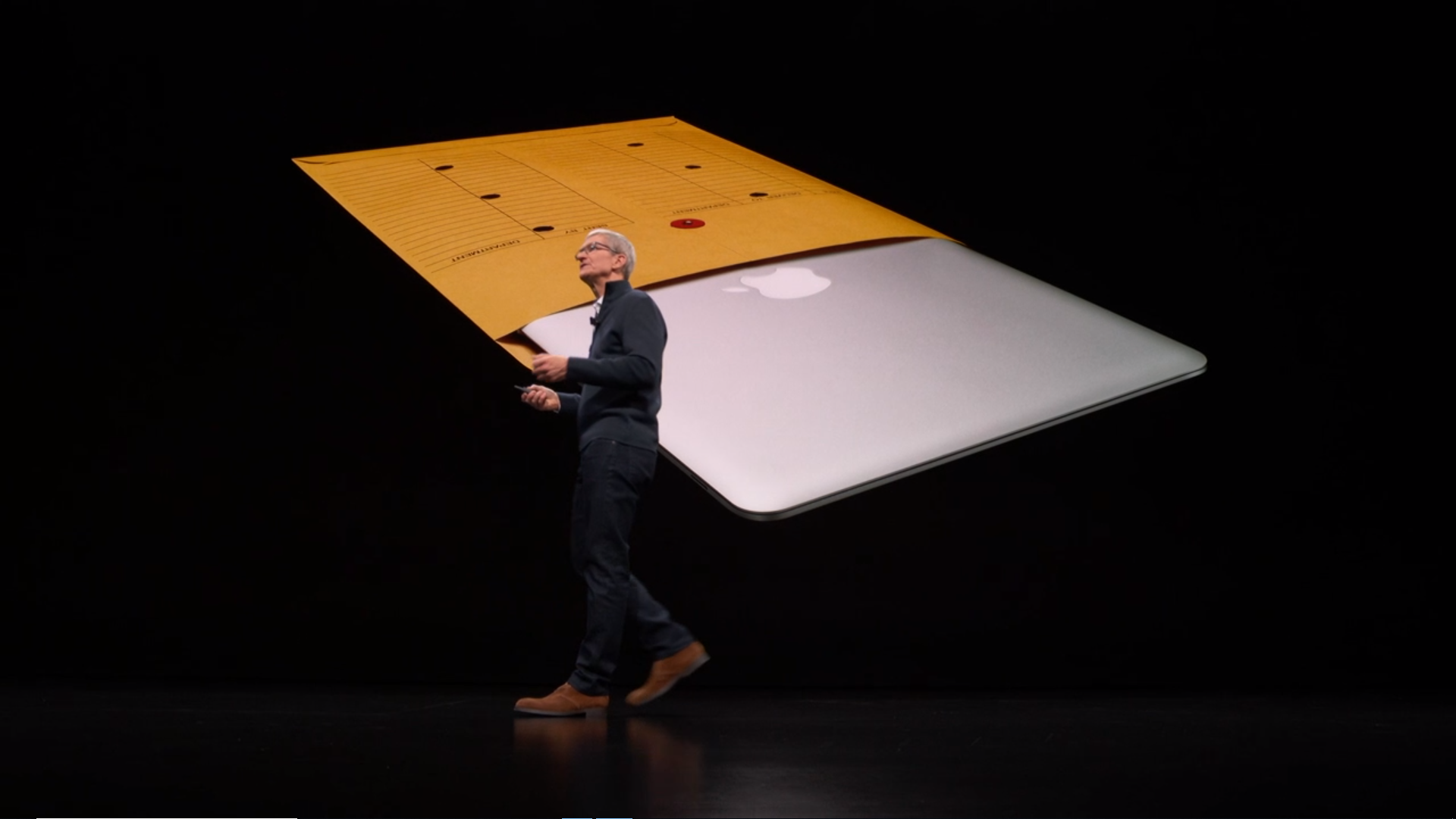 The Macbook Air, Apple’s less-powerful but ultra-light laptop, is one of the few computers tech fans and critics have continued to talk about years after Apple stopped keeping it current. It’s a wonder that it took them so long to bring it back.

In many ways, the new Air simply brings the last model up to date, adding hardware features that have become standard on Macbooks and Macbook Pros. It has a 13.3” retina display and two Thunderbolt 3 ports, and features Touch ID and Siri, a larger trackpad, and Apple’s newest keyboard (though, based on Apple’s last few laptops, we aren’t sure that’s an improvement). Under the hood, so to speak, it now has an Intel 1.6 GHz dual-core 8th-generation i5 processor, and more upgrade options for memory and storage.

The new Air’s biggest improvement is to its signature trait—it’s both thinner and lighter than the old model. The new Air is 11.97” wide and .61” high (closed), compared to 12.8” wide and .68” high, and weighs 1kg, down from 1kg in the old model. While it may not sound like much, every tenth of a pound counts when you carry your laptop on your back every day.

The Macbook Air isn’t remembered so fondly because it was a powerhouse, but because it was enough computer for the typical user, packed into a computer you can keep and carry with you all the time. The new models seem poised to live up to that standard.

The new iPad Pro is basically a laptop 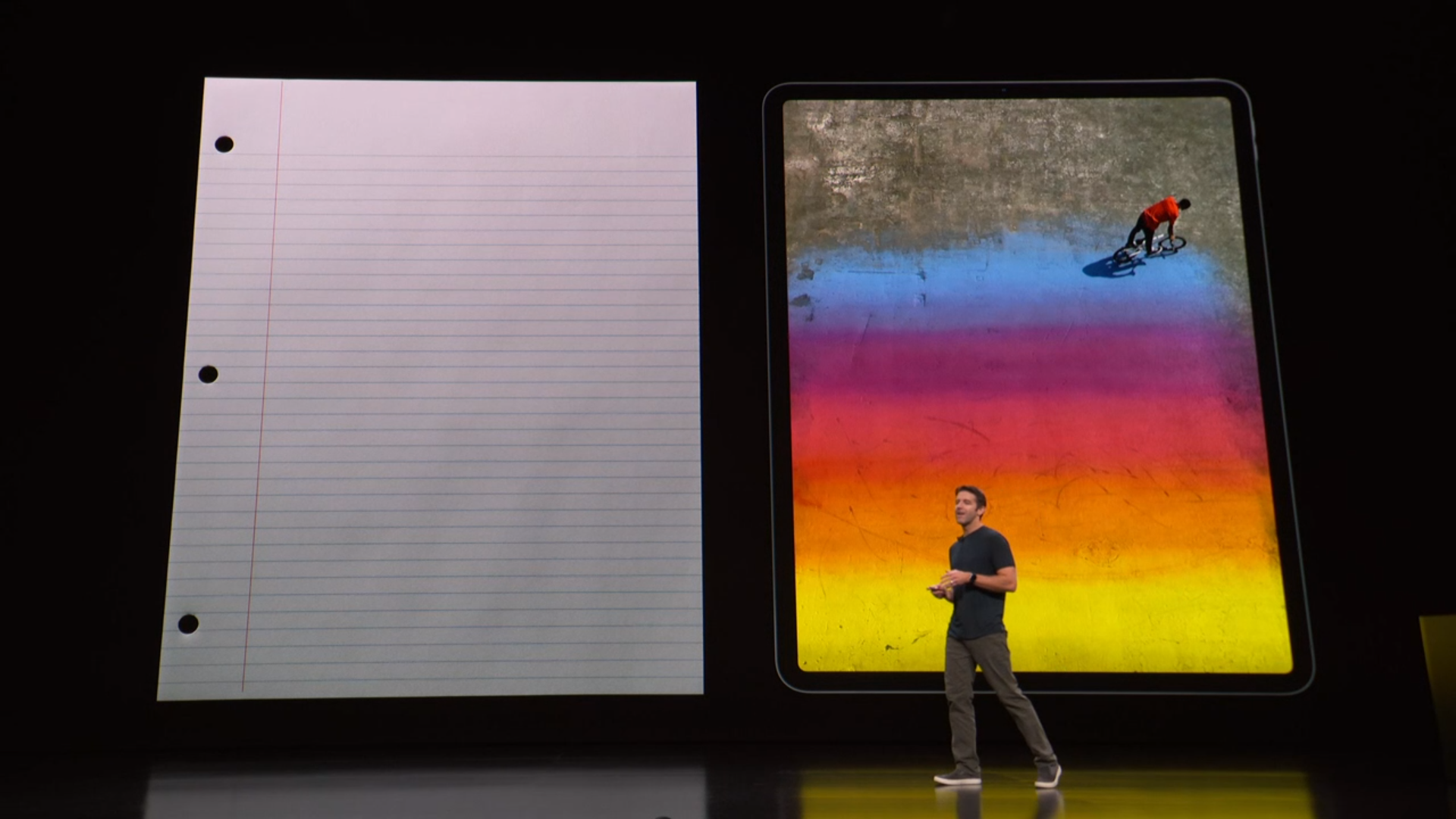 Perhaps the boldest of the day’s announcements, Apple unveiled the next edition of the iPad Pro, which has been optimised to compete with less powerful laptops and 2-and-1 devices, rather than other tablets.

As predicted, the new iPad Pro ditches the Home button in favour of Face ID, allowing you to unlock the device just by looking at its 7 megapixel front-facing camera. To compensate for the button’s navigational properties, it now features a host of contextual swipe shortcuts to switch apps and setting up split-screen with two apps, among other things.

It’s also significantly more powerful than the last model, thanks to its new A12X Bionic chip, a 7-core GPU, and an 8-core CPU. Apple claims it can perform some tasks as much 90 per cent faster, and that it’s faster than 92 per cent of portable PCs.

That power allows its 12-megapixel rear camera to shoot video in 4K at 60 frames per second. Those videos will show up nice and crisp on a 264 “liquid retina” display, which outputs at 264 pixels-per-inch. Apple backed it up by showing an upcoming iOS version of NBA 2K19, which looked comparable to what you’d see on PS4 or Xbox One. I still don’t think anyone should play NBA 2K19 on an iPad without a controller—I’m sorry, but your hands will break—but it looked impressive. Apple also improved the iPad Pro’s functionality as a tablet, giving it new features that mesh well with the new and improved Apple Pencil. The iPad Pro has 102 magnets on the inside, which means peripherals like the Pencil snap to any part of the iPad. The iPad syncs to the pencil when they touch, charges it wirelessly. (The bad news: The new iPad Pro does not work with the first-gen Apple Pencil). 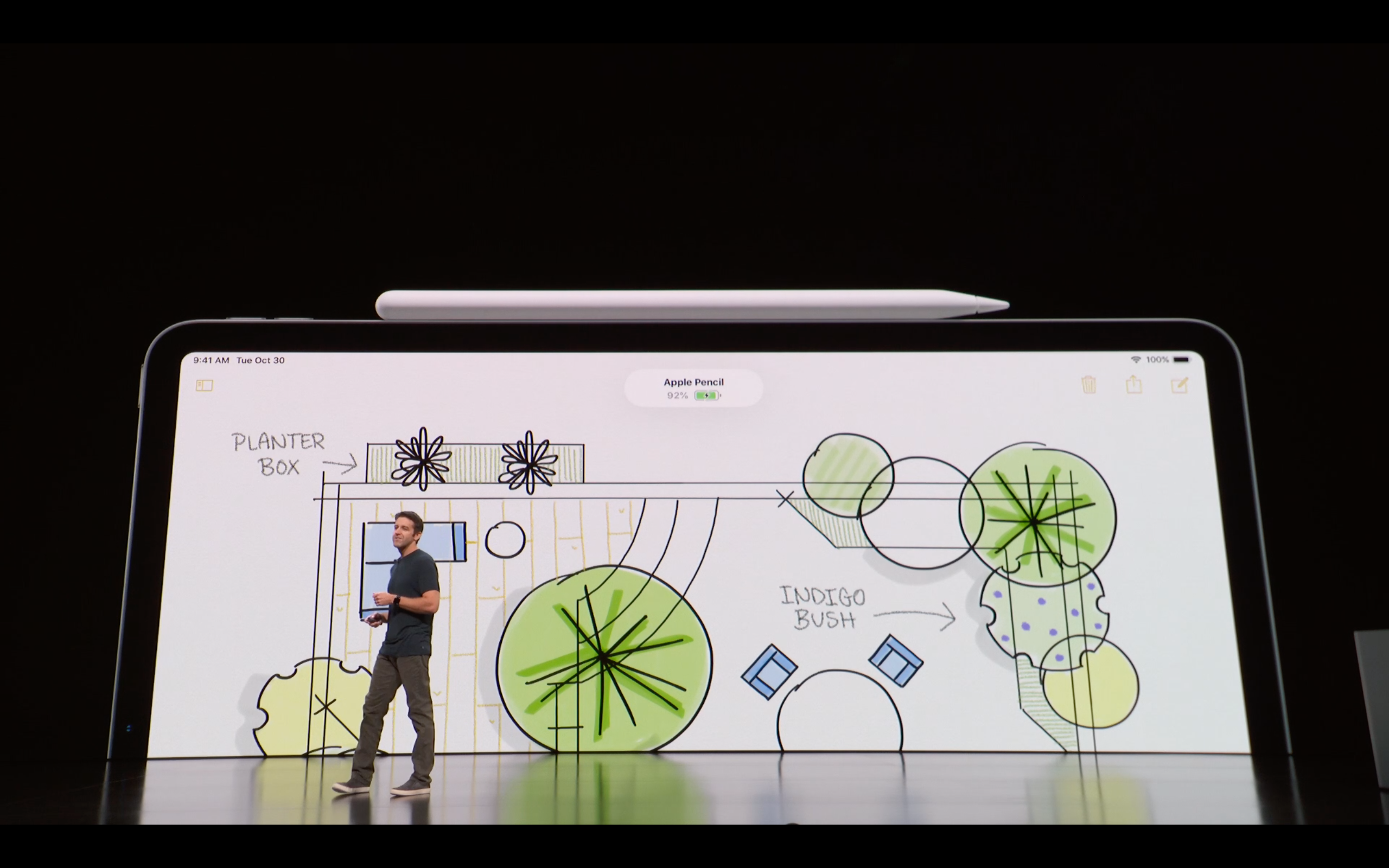 Arguably the most important change — or at least the most symbolic — is that iPad Pro now features a USB-C port instead of Lightning. This makes it much easier to connect it to a wide range of peripherals design professionals want or need, such as a larger monitor. Also, it can “reverse charge,” which means it will charge your phone you if connect it.

The new iPad Pro comes in two sizes, with 10.5” and 12.9” displays, respectively. Both models are available in four storage sizes and with optional LTE support. It will be available in stores November 7. You can pre-order one now on Apple’s website. You can also check out Apple’s full rundown of the iPad Pro’s specs. 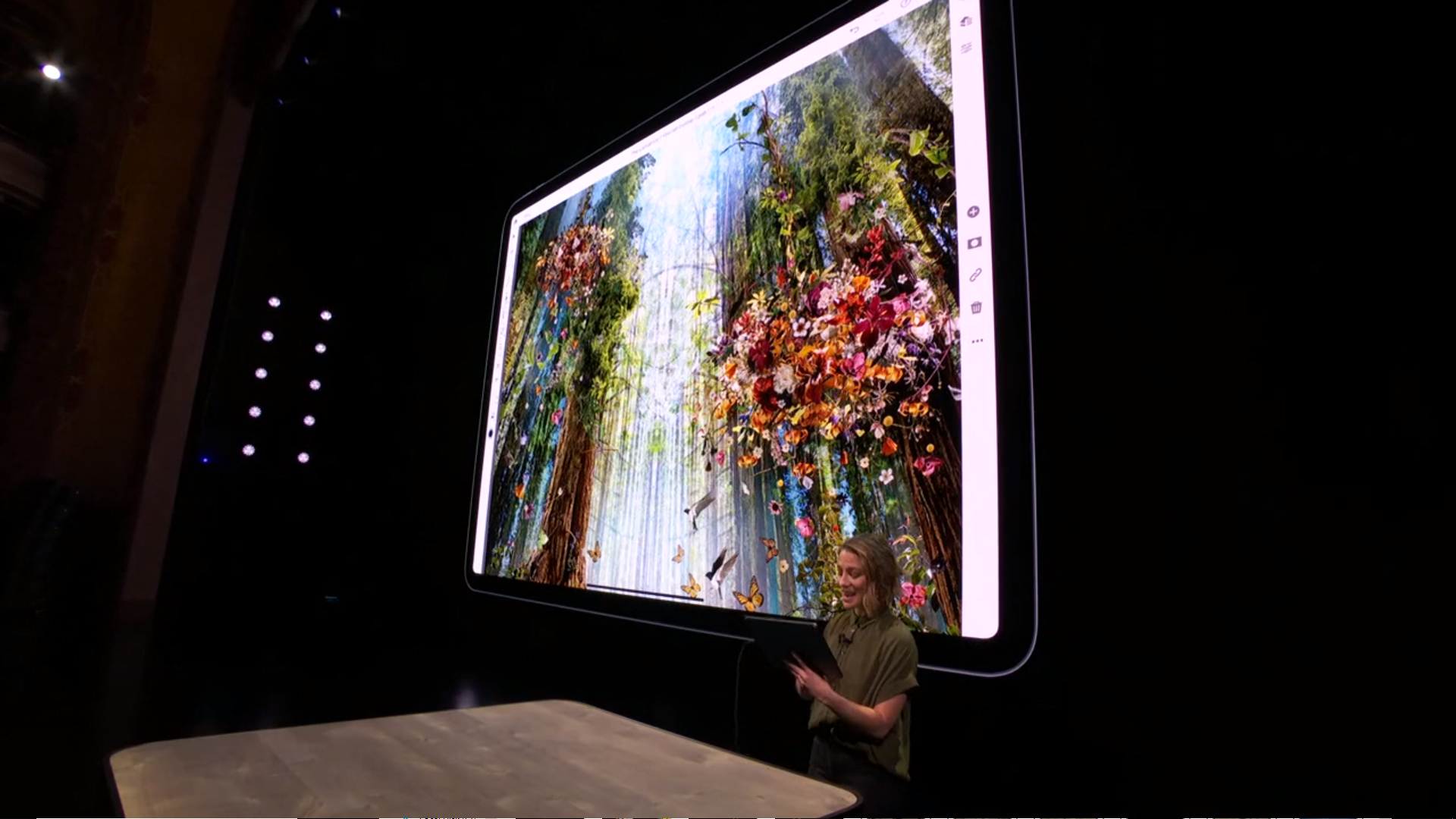 To take advantage of the new, more powerful iPad Pro, Adobe showed off what it described as “real Photoshop”—an upcoming version of the essential image editing program for iOS that removes some of the key limiting factors in previous iOS Photoshop apps. While this isn’t exactly breaking news, pairing the new iPad Pro with this enhanced version of Photoshop makes good on the Pro’s promise of an uncompromising high-end tablet for designers.

Adobe identified a few key differences in this version of Photoshop. First, that you can move among the layers of your image quickly using a scrollable bar on the right side of the screen. Second, that you can move from looking at an image at the pixel level all the way to a full version of the image seamlessly—it’s literally a double-tap with the Apple Pencil — without any lag on a souped-up iPad Pro. Lastly, files created in the new version of Photoshop would save as PSD files, rather than CC files.

Adobe also showed off a demo of Project Aero, a new tool it announced earlier this year, which turns helps you turn Photoshop creations into working AR art installations. The demo showed a 2D image in Photoshop get turned into an AR projection, and then edited the AR image to add and enhance its unflattened elements.

Adobe said that both the new version of Photoshop and Project Aero are on track to launch in 2019. 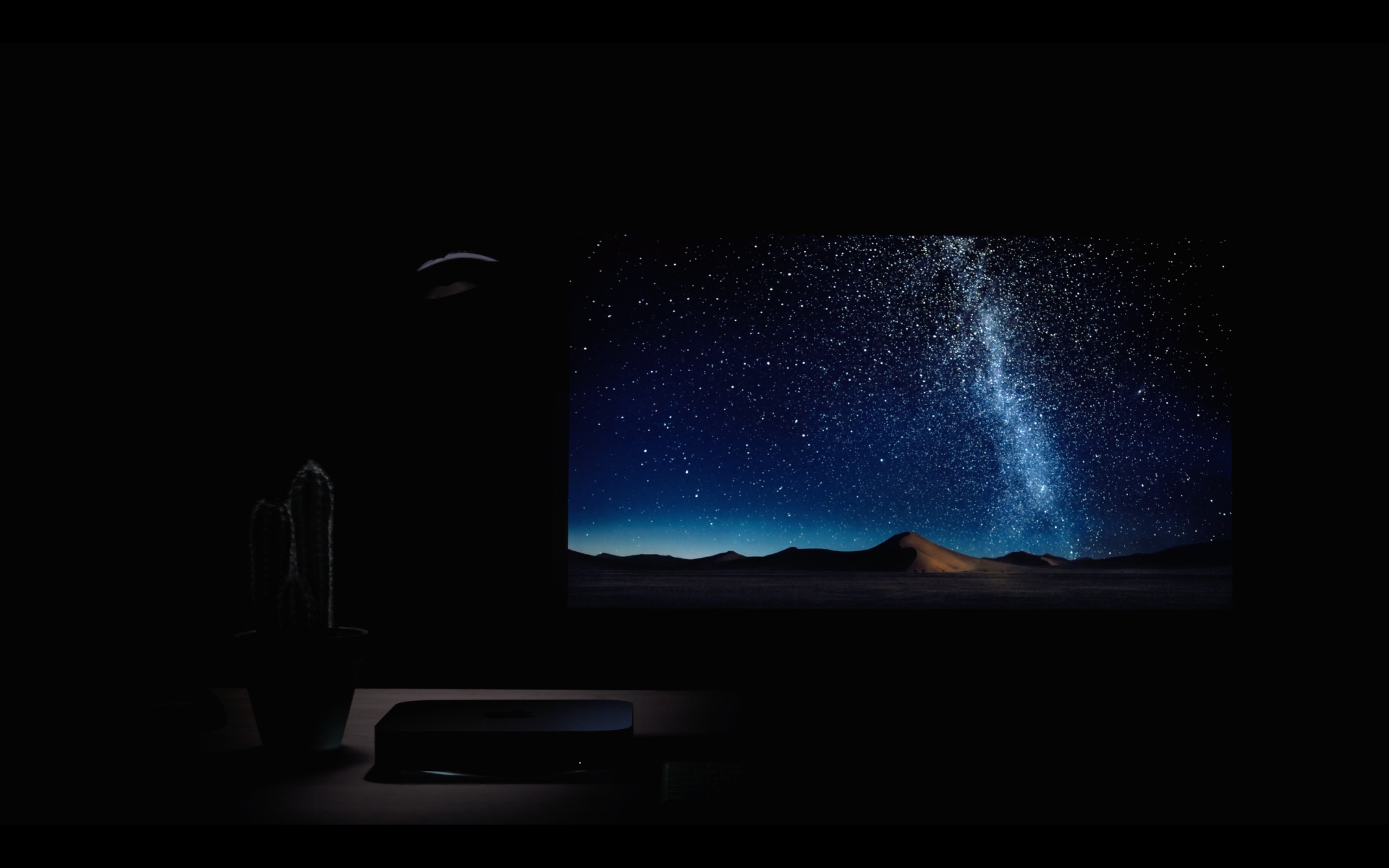 Lastly, Apple also announced a new version of its micro-form desktop computer, the Mac Mini. Like the Macbook Air, it had been a very long time since Apple took a hard look at the Mini, so the upgrades are significant.

The new Mac Mini features either a 4- or 6-core 8th-generation Intel CPU—depending on the model, you can get anywhere from an i3 to an i7 processor—8-64GB of RAM, and anywhere from 128GB to 2TB of storage. It’s a lot of power in a small package.

It also has more ports than before—4 Thunderbolt 3 ports (which double as USB-C), two USB-A ports, an HDMI 2.0 port, and an upgradable ethernet port. That’s a ton of options relative to any other modern Mac, which emphasises the fact that sees the Mini as more of pro tool for people who need something that will plug into a custom hardware setup, or something stackable for enterprise purposes. That said, there’s nothing stopping you from pairing it with a monitor, mouse, and keyboard and using it as an everyday machine. 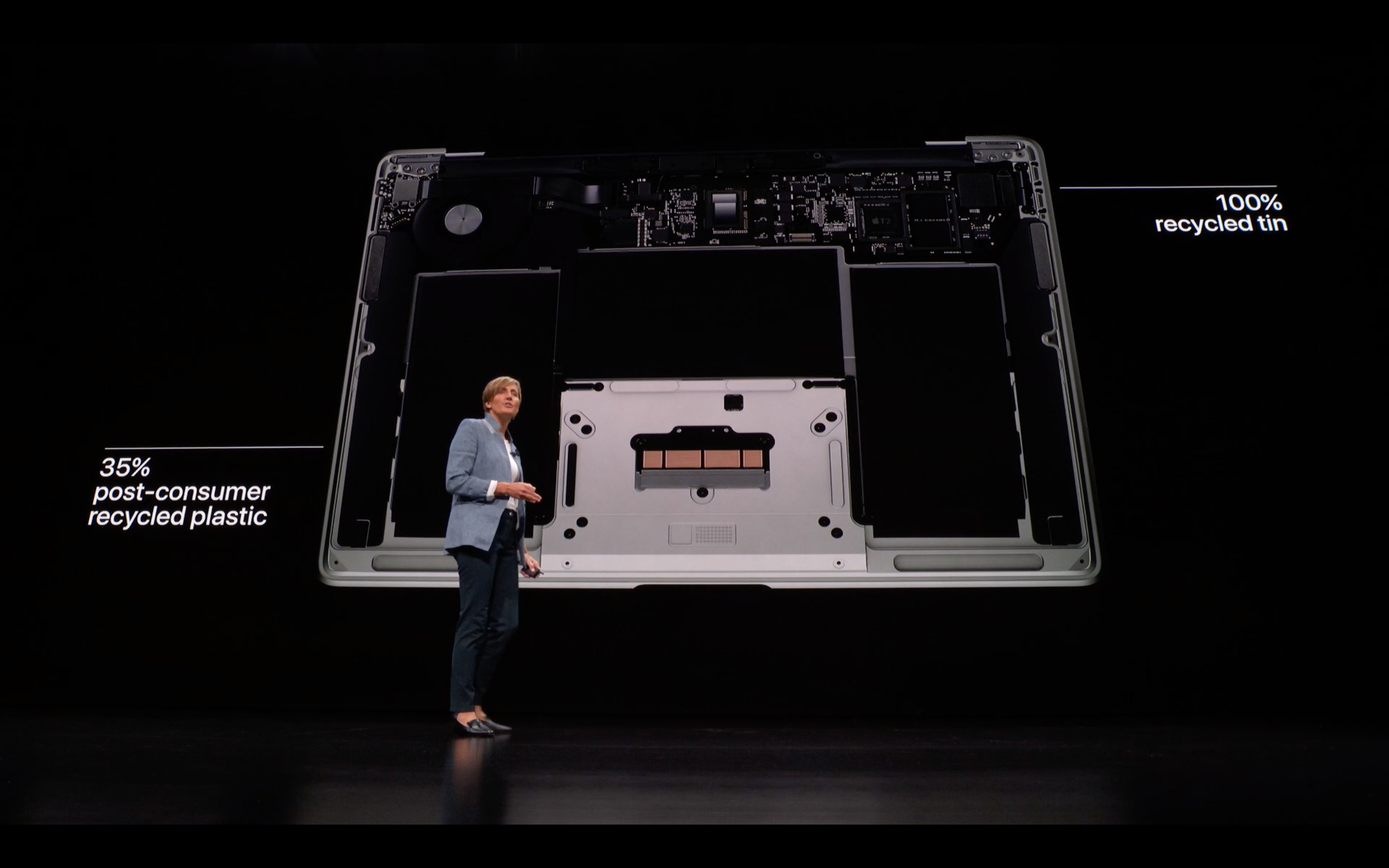 In addition to the new devices, Apple shared one very interesting manufacturing-related change that affects all of the hardware it announced at the event. All of the devices’ “enclosures”—cases—will be made from recycled Aluminium. Apple said the change, made possible by the company’s Metallurgy specialists (shout out to the Apple Metallurgy team), will reportedly reduce the carbon footprint of these devices by as much as 50 per cent. 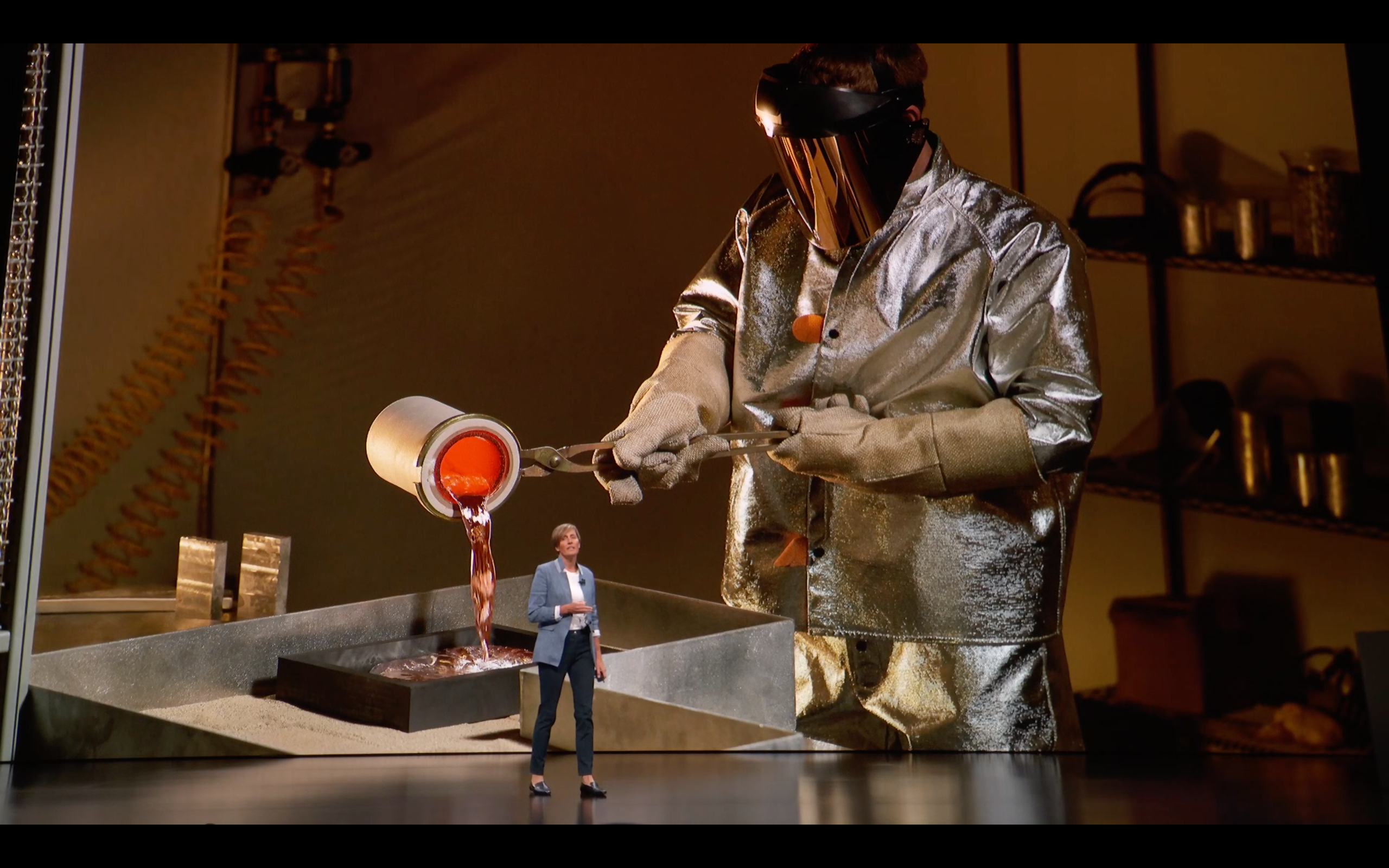 It’s not a new device, but any change that makes computers a little more eco-friendly is welcome, especially when it will not have any obvious adverse effects on the products. 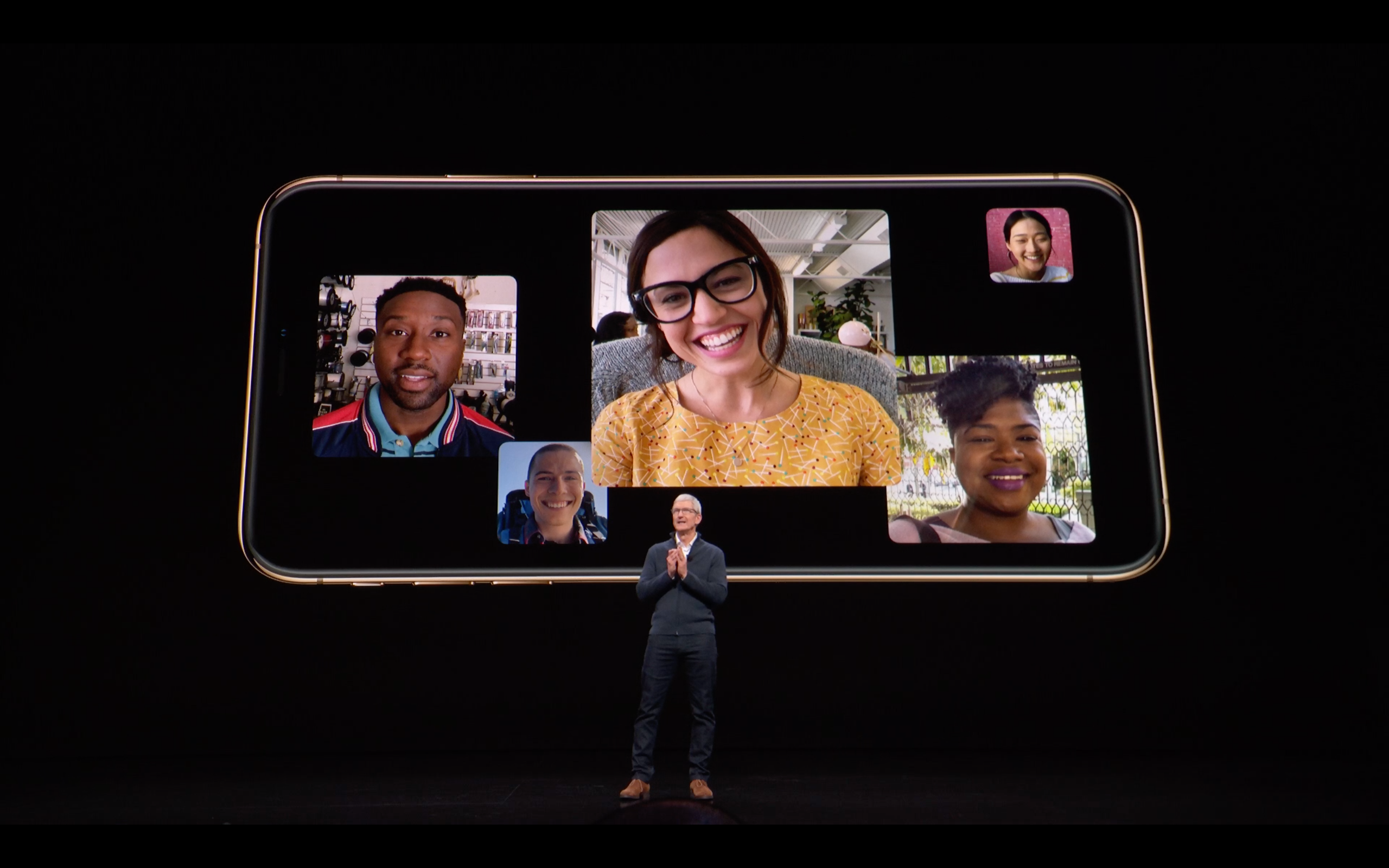 For a more detailed rundown of everything changing in iOS 12.1, we already have a roundup of the essential features.