You might be surprised to learn that location is starting to take second place to internet connectivity as a search criteria for new office space. And this is causing a massive problem.

Commercial real estate landlords need to treat internet performance as a priority feature to attract and retain tenants. Forbes Magazine recently predicted that in just two years time 50 percent of the workforce will be freelancing in some aspect.

Many businesses rely on the cloud to support the increase in remote or gig workers. Shifting work to the cloud is near impossible with slow Internet – and businesses need reliable broadband access for more than the cloud.

Commercial real estate owners and investors need to give internet connectivity the same attention they would give other amenities like shared conference rooms, employee cafés or fitness centres.

However, there is a big problem.

Our national broadband network, NBN appears to have lost its way. Telecommunications Society Journal editor and associate professor at RMIT, Mark Gregory recently outlined the major problems with the current NBN at a Tel Soc presentation.

Gregory is not impressed with our current NBN and highlights four key failures:

Our own Commercial Property Guide monitoring of NBN for business clients shows that rollout expansion has flat-lined in 2018 at about 45% (see graph below). 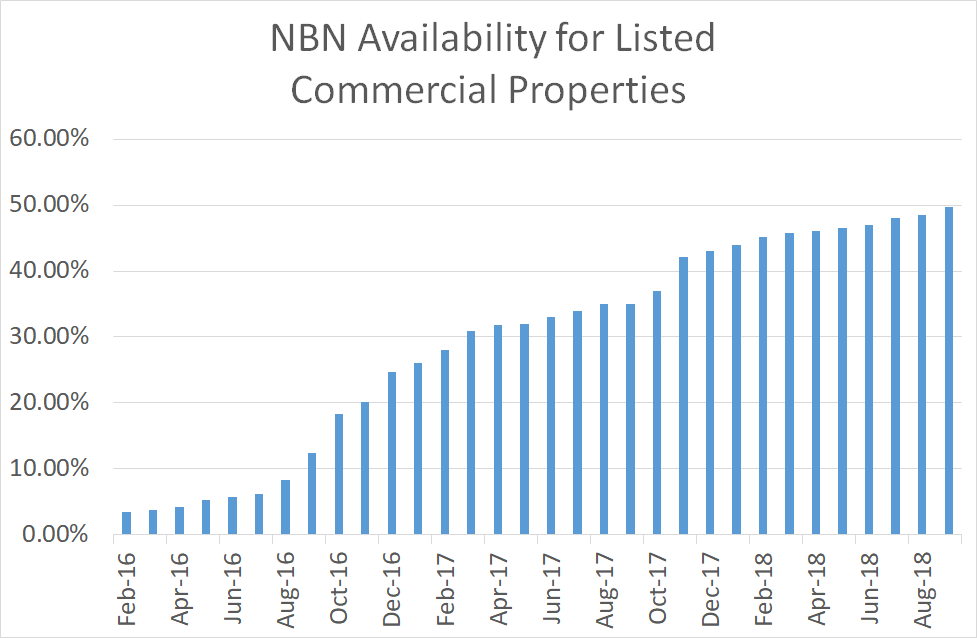 One bright spot is that NBN penetration in previously low rollout areas of Sydney CBD and North Sydney has surged to 35% and 38% however Melbourne CBD remains an effective NBN-free zone at only 6%.

Official NBN technology percentage of technologies deployed and planned match our own commercial property statistics. This technology mix is unchanged with its heavy reliance on legacy hybrid fibre cable (HFC) and fibre to the node (FTTN). NBN is far more important than better quality Netflix.

We need a high performance NBN so businesses that occupy our commercial real estate can remain globally competitive. This is especially true for small business who don’t have the resources to access alternative high speed internet.

The current federal government appears to have a limited and simplistic vision for the NBN. It just sees the future as an enhanced version of the past – progressing from a small percentage of consumers requiring on demand video to a high proportion of consumers wanting 4K (super high definition) video in the future.

Cost cutting has replaced the objective of delivering a world standard internet network. The performance of the HFC component of NBN has been further downgraded by using a very low cost design standard. The design assumes very modest neighbourhood peak bandwidth requirements, based on the federal government’s report “Future trends in bandwidth demand”. So where are the critics? The peak industry bodies that should speak out about our failure to compete globally on digital connectivity are silent. No organisation has suggested the unthinkable – the NBN is not fit for purpose.

The early years of NBN were so promising. NBN got off to a great start with one of the world’s fastest builds and rollout of the NBN backbone infrastructure.

Then things started to go off the rails. Universal Fibre to the premise (FTTP) was replaced with a low cost model that had an associated low performance. Driven by budget constraints Fibre to the Node became the main technology to be deployed by NBN.

The NBN CEO Bill Morrow eventually quit after the government insisted that the fault-plagued and unreliable HFC Telstra network be used as one of the main NBN technologies. So NBN is now heavily reliant on two obsolete systems – HFC which is already passed its useful life and FTTN that is incapable of meeting future business and consumer performance expectations.

Associate Professor Mark Gregory explains NBN’s dilemma: “The NBN is now dependent on obsolete HFC and FTTN technologies. The FTTN network is now vulnerable to competitors offering a superior performance solution. No government will be willing to take the step to write-off the $26 Billion sunk into the FTTN network. This is one simple way NBN could be made competitive and attractive for eventual private sale.”

The completion date for NBN has progressively moved from 2018 to now officially 2022. However informed insiders now expect completion to be beyond 2022.

Mark Gregory’s final grade for NBN, “The end result of these economic short cuts is that NBN is not world standard, in fact not even fit for purpose. By contrast New Zealand and the UK have Gigabit solutions for either the same or lower cost per connection as our inferior NBN”.

This leaves us pondering – NBN, the silent train wreck.