My Life With A Monster 38-Inch Monitor

My current workstation set up has a 13-inch MacBook Pro perched on a stand adjacent to a curved 24-inch display I pic ned up on sale as it was the display stock at a local store. But when LG offered me the chance to review its 38-inch 38WK95C-W monitor I jumped at the opportunity- once I checked that I had enough space on my desk for it. Here’s what I thought.

The LG 38WK95C-W 38″ 21:9 UltraWide WQHD+ Curved IPS LED Monitor comes in three pieces; the main display, a base and an arm that links those two components. It all came together easily although you’ll need some room to get it out of the large box and to lay it all out for assembly.

There are cables to accomodate all the different display options in the box and the display can tell if you’re using your own cables and not the supplied ones. It puts a warning on the screen, telling you might not get the best viewing result. You can disable the alert so it doesn’t show up every time you turn the monitor on. 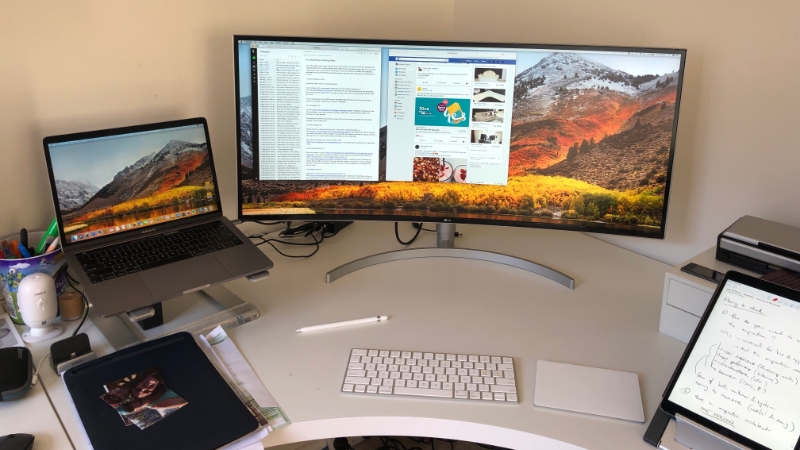 With a display this large, you’ll want to make sure your desk is deep enough so that it’s far enough back so you can see the entire width easily. I have a corner desk and needed up pushing it back most of the way so I could easily see the entire screen without constantly turning my head. It’s also height and tilt adjustable so you can place in an ergonomically sound position.

With the MacBook Pro (a current issue 13-inch) I just plugged in using USB-C and it just worked. However, LG does supply some extra software as some systems may require extra software to drive the display resolution. Exactly how I was meant to access that software from the DVD in the box is interesting given computers with optical drives are pretty rare these days!

Why Not Two Displays?

Typically, when we want extra display area, the easiest thing to do is buy a second screen. With “good enough” USB options on the market, and the advent of USB-C as a display connector, it has become easier to add extras screens. And a pair or 24-inch or 27-inch displays will give you comparable display real estate.

I’ve run multi-display systems many times over the years and there are some significant productivity benefits. Being able to see more information at once and not have to toggle between apps can save significant amounts of time. Some recent research commissioned by Fujitsu Siemens Computers suggested a three-screen system could boost productivity by over a third. My gut feeling is that a single large display could achieve similar results.

The other advantage to a single display is that you don’t use as many power outlets.

When I was working with my 24-inch display, I used the MacBook Pro’s screen quite a lot. I typically used that screen for email and messaging apps with the larger monitor used for real work such as research, writing and image editing.

The larger display changed that.

With the 38WK95C-W, I found I could comfortably display three large windows, side by side, without everything feeling cramped. Taking advantage of Spaces – macOS’ virtual desktop system – I could easily flick between a “productivity” desktop and a “communications” desktop easily. That gave me an efficiency boost.

The display quality was very good but it took me a while to tweak it so it looked best to me given the lighting in my workspace.

One thing I did note was that the curvature of the display is quite subtle. If anything, I thought it could stand to be a little more curved. I have the display in a corner and I felt it could stand to be a little rounder so the edges were easier for me to focus on. But, I expect most people will use this display on a normal desk, directly in front of them so that is unlikely to be a significant issue.

Images, movies and text were all clear and I had no problems but it’s worth noting who LG sees as the target audience for this display. They’re pitching this display at accountants, traders and executives who want to see lots of data at one time. If you’re looking for a big gaming monitor, this isn’t for you. But if you’re after a work tool and your budget extends to $2599 then it’s worth a look.

Would I Buy It?

Whenever I review a product I ask myself two questions; how much is it going to “hurt” to return the product and would I spend my own money to buy it?

Disconnecting and repacking this display will be hard. Over the last month or so, it has made a real difference to how I work. I can see a lot more on the screen that ever before and find my self toggling between apps far less. Being able to have my research notes (written in Notability), writing tools and web browser in front me all the time makes a big difference to me.

But the asking price of $2599 is steep. In a corporate environment with a more generous budget I’d be putting in a requisition request, citing the productivity benefits. Even a 10% boost in productivity for someone earning the average or median wage would deliver payback quickly. But if I won the lottery or had a financial windfall, this display would be on my shortlist of things to buy.