I’m Dylan Thuras, Co-Founder Of Atlas Obscura, And This Is How I Parent

Dylan Thuras is the co-founder and creative director of Atlas Obscura, a guide to the world’s hidden wonders. It’s a place where you can be transported to a Japanese island where cats outnumber people or America’s famed museum of medical oddities or the Australian lake whose pink hue defies scientific explanation.

Thuras co-authored the new children’s book The Atlas Obscura Explorer’s Guide for the World’s Most Adventurous Kid, describing it as “a little sampler of what is amazing and wonderful in our world”. A dad of two, he talks to us about how he parents.

Family: My wife is Michelle Enemark. She’s a freelance animator. We have a three-and-a-half-year-old son Phineas who we call Finn and a 17-month-old daughter named Jean.

“Life is long and the time when your kids are young is short.﻿

Tell us a little bit about your family and your career.

Ten years ago, Atlas was a passion project. I was doing it on nights and weekends while I was a freelance editor. And then it evolved over time into something much larger.

In 2013, I was overseeing every different aspect of the company and burning the candle at both ends. And we were about to have Finn, our son. It suddenly became clear that I couldn’t keep running the business like this and also be a present, active father. It was just time to do something different.

So we raised money and brought on a CEO, and that freed me up to move into the creative director role. And then when we had our second kid Jean, we made another change to leave the city. Now we’re about two hours upstate in town called Rosendale.

We made the decision to put family life ahead of work life for now. It comes at some cost — there are some things that feel like missed opportunities, or whatever. But life is long and the time when your kids are young is short.

Of course, when you’re in it, it feels like an eternity and it’s like, “Oh my God. When are you going to grow up and not be so difficult?” But then you sort of realise, actually, this is like five years.

When you orient your family around that idea, it can give you permission to not be a hero and do everything at once. So my wife isn’t currently working and I go into the office a day or two days a week. I am incredibly lucky to have the flexibility to spend as much time with the kids as I do. 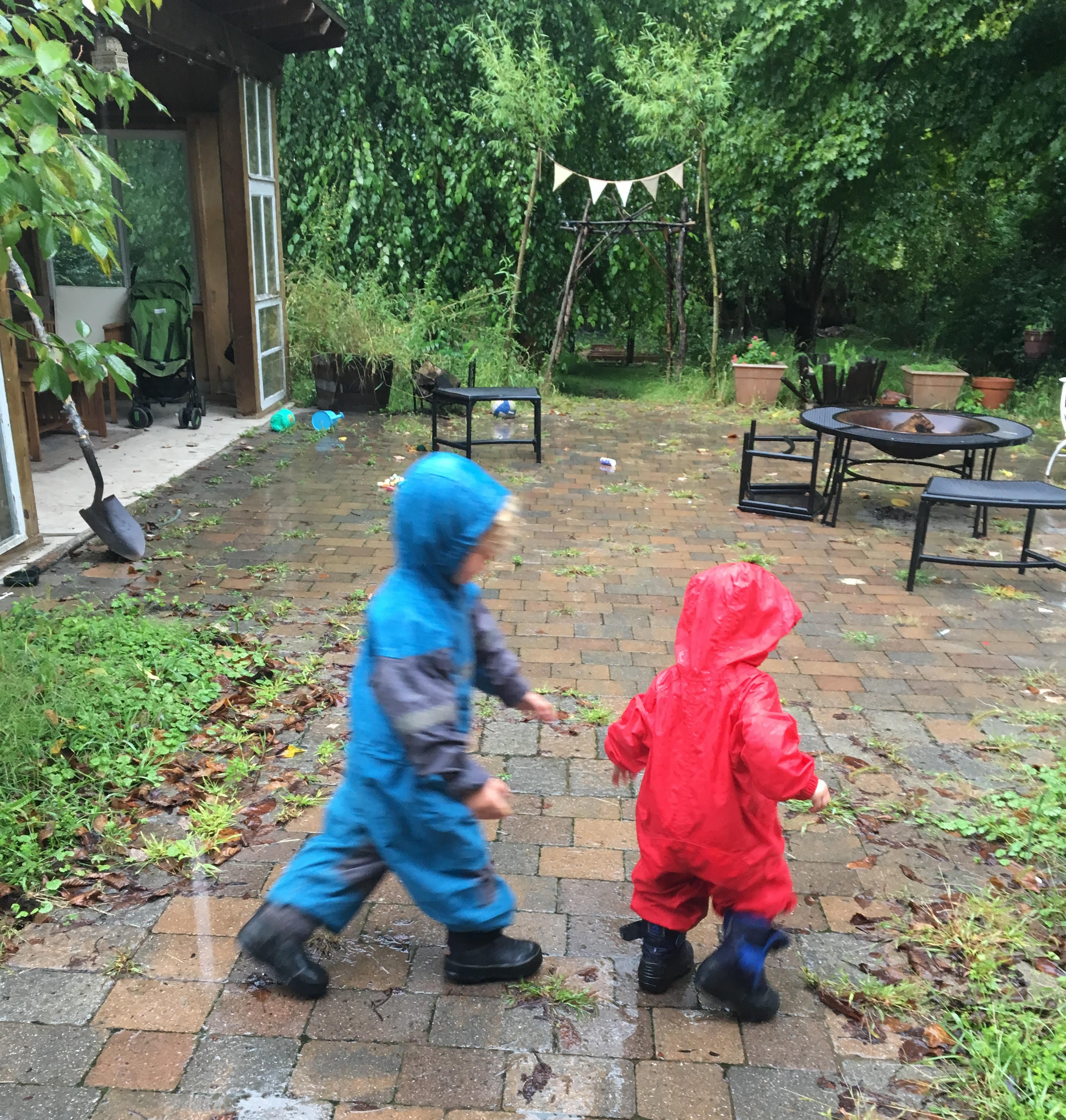 What’s it like working from home with the kids?

My home-life split has always been really messy. If you’re working from the house, things just come up. Your partner might need your help with things, like suddenly both kids are screaming, and you can’t in good conscience not intervene. And so that can be difficult.

But but the trade off is having the ability to, like, just go take a walk in the middle of the day. Or I was just working on a mini construction project in our yard — Finn was out with his tool set and I was out with my tool set. That kind of thing makes it worth it to me.

In our family, the coin of the realm is mornings. Anything could be traded for a morning. My daughter has this terrible habit of waking up at, like, 5:30AM. So normally, we are taking turns getting up with her.

I make breakfast. Usually it’s pretty simple like granola or oatmeal. Finn goes to a Waldorf school and we pack his lunch the night before. The person who is sleeping in gets to sleep until about 8:30AM. If we’re being kind, the other person brings them coffee and says, “Hey, you’ve got 10 minutes before you have to start getting up.” And then he goes to school at 9:00AM.

Around then, Jean is either is put down for a nap or someone is hanging out with her.

How much outside help do you get as a parent?

Unfortunately, our families are both far away. Mine is in Minnesota. My wife’s mother recently passed away, so that was hard this summer. We get an occasional babysitter, but we don’t have any regular help. To some degree, it’s intentional. But then there are also times that I think it’s really crucial to be able to have some time to yourself as adults. 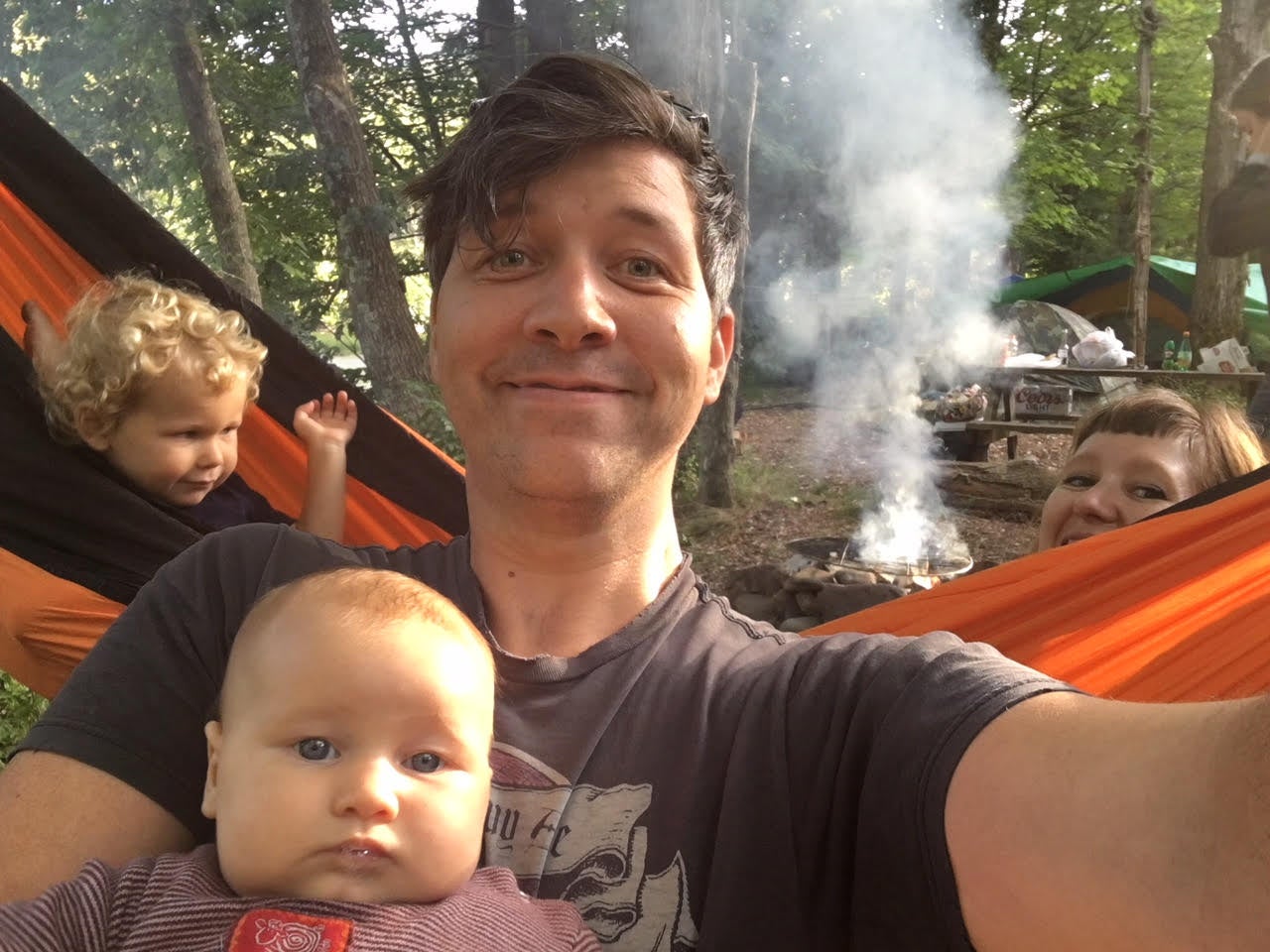 When our first was little, we used the Wonder Weeks app. We were, like, totally glued to it, trying to see what was going on with him. Then when our daughter came, it was like, yeah, whenever, she’s fine. It’s very cliched but it’s entirely true that you become a different kind of parent the second time around.

With screen time, I love the world we’re in now in that we can just choose the shows that we think are great, very selectively. There are some amazing shows on Netflix right now. Puffin Rock is great. We’re also trying a new show called Hilda that looks really good.

I am much more concerned about my screen time than the kids’ at this point. Distracted parenting is a thing. You can look at your phone multiple times a day for various practical reasons, but sometimes you just do it because your brain is like, “Ahhhh!” I started using an app called Mute that tracks how much time I’m on the phone so I can bring it down to 45 minutes a day.

We’re not super amazing travellers or anything, but we do have stuff we bring with us that is useful. A travel system stroller is amazing — the ones where the seats can snap out and become car seats. It just saves you from having to carry one extra giant thing.

We also have one of those foldable booster seats that can strap onto any chair. In the rest of the world, the restaurants that you want to eat at are probably not the ones that have, like, a set of 10 high chairs.

I’m kind of obsessed with the idea of creating the ultimate single bag — a “travel-with-kids pack” — but the problem is that kids change so much over time that the pack would always need to be changed. 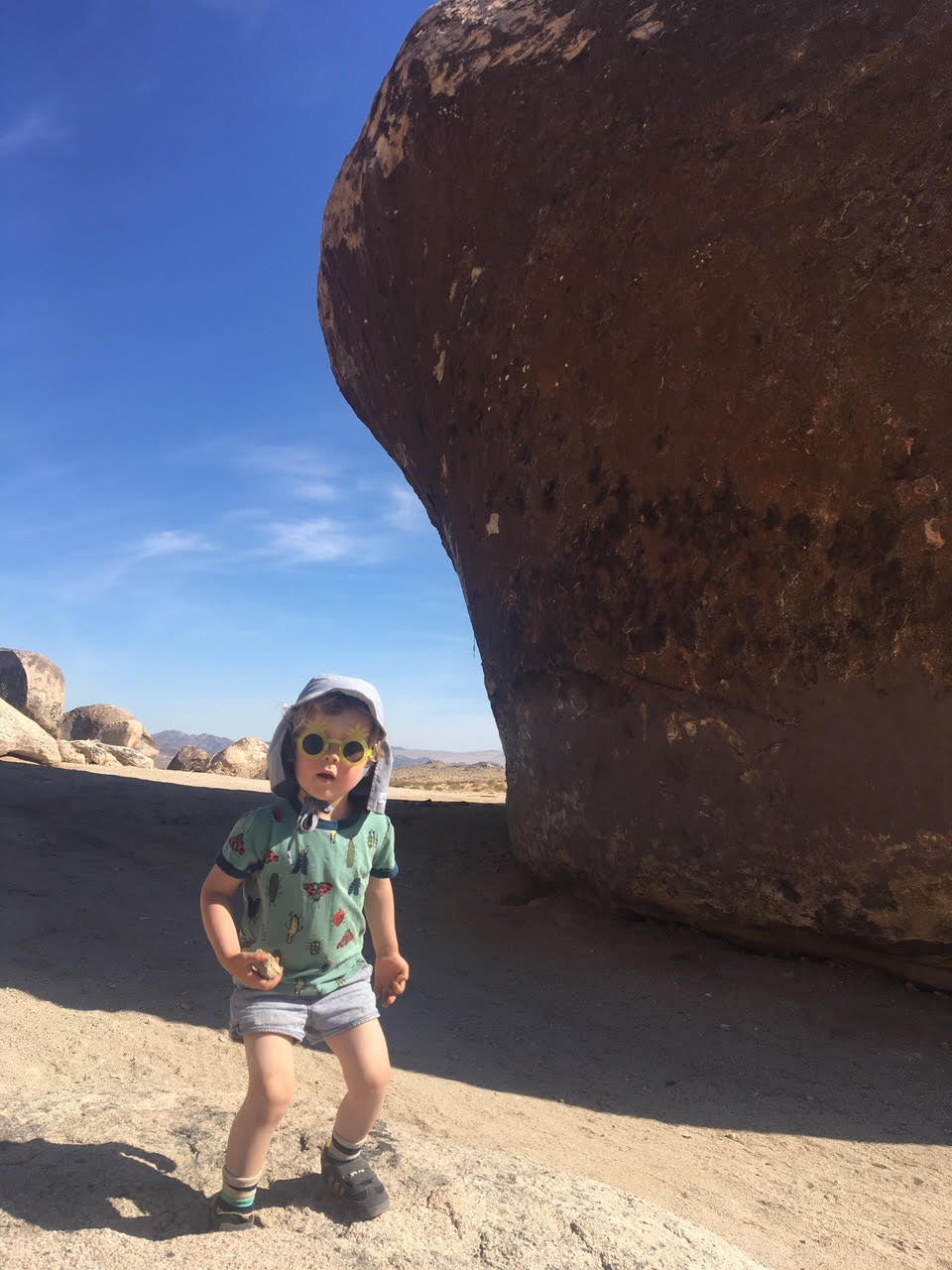 What are your proudest moments as a parent?

The proud moments I have are when I see Finn, and to some extent Jean, playing and engaged deeply with the world around them.

One of the things that being out of the city affords is that Finn can be in the yard alone and we can watch him play independently. Seeing him sink into that creative free space makes us think, “OK, we’ve made good decisions.” 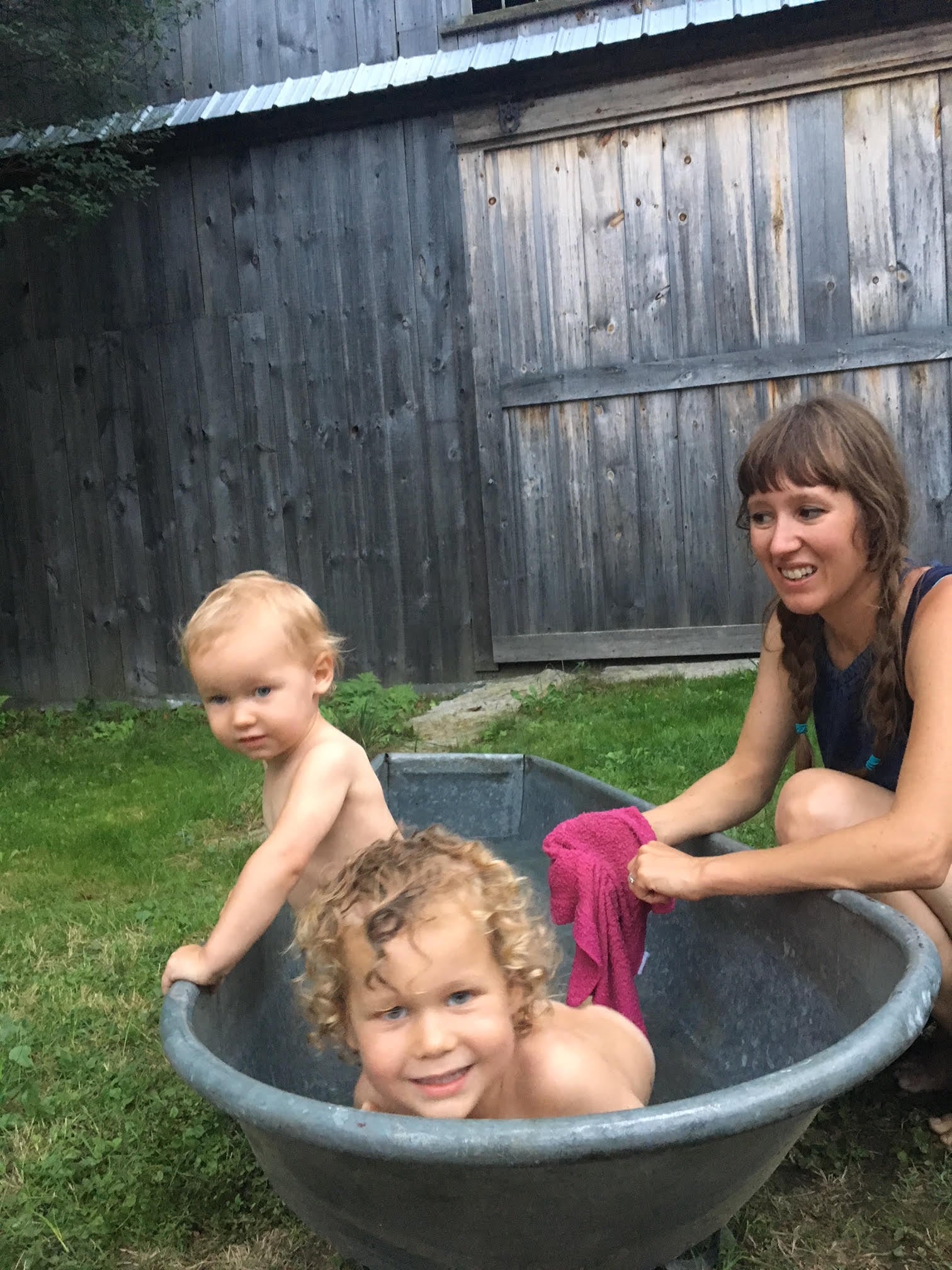 Is there anything you do to help get him into that creative free space?

Some of it is the environment we’re in. It was a lot harder when we were in the city. It’s doable, but it’s just more complicated.

Other than that, it’s just giving him a lot of unsupervised time. Trusting, to certain degree, his ability to not get himself killed. We let him use a little saw of his own and a hammer, and we let him hold a knife and cut things. We’re there, but we give him a long leash.

Kids are really capable. And the more you give them that space, the more capable and responsible they become.

What are your favourite family rituals?

This is so small and simple, but we light candles for meals. Sometimes, we let Finn light them and he blows them out at the end. It’s a very small thing but it has a little magic to it.

And then lately, I’ve been taking my son backyard camping. He helps me set up the tent and we make a little fire.

I know I’m making our lives sound more idyllic and together than they are. It’s not like we’re living this like peaceful, zen-like monk life in the country. Really, we’re crazed and our house is a mess and we’re just as guilty of being harried and overwhelmed like annoyed as anyone.

Any tricks for handling tantrums?

I think sometimes, you can just let them happen. You can even leave them to be upset and come back later. Give them space and acknowledge, “You’re upset and that’s OK.”

Being present. Being really, really present. The world and the news cycle is pretty terrible at the moment, and all of us have Slack and email and Twitter and Instagram tugging at us. So structuring a life where where you can be as present as possible is a challenge for everyone in the world.

But that’s what I want to do as much as possible. And I fail at it plenty.