How To Find Love, According To A Professional Matchmaker

Though most of us don’t go so far as to hire an actual matchmaker in our quest for love, it should come as no surprise that if you’re looking for real, concrete advice on turning your luck around in the dating game, some of the best tips will come from the professionals.

Alessandra Conti is a Celebrity Matchmaker at Matchmakers In The City, a certified matchmaking firm with locations in Los Angeles, New York City, DC and San Francisco. Having spent years successfully pairing people off, Conti has gained quite a bit of insight into what helps clients successfully find the right person for them — and what the rest of us are likely doing wrong in our own searches.

Below, Conti shares tips on what we can all do to up our game, with or without professional help. After all, a world with more love in it is exactly what a matchmaker wants.

A lot of clients come to Matchmaker in the City because they’re sick to death of swiping left and right, says Conti. Their job is to do all the vetting that you’re normally expected to do yourself after you match with somebody, including a background check, social media check, and even an intensive interview before you meet a match for drinks. If that sounds like a lot of work, it’s because it is.

Conti says we tend to be afraid of that work, and hold back on really looking with a goal in mind. Being passive kills people’s chances before they even get out there:

Mistakes that Clients are often making before they come to me is that they are believing the myth that love comes when you least expect it. I hate when people say "When you stop looking, it will find you!" Maybe in the past before Netflix and the internet this was a reality, but nowadays, you cannot be passive when it comes to finding love if it is a priority for you in your life.

Still, she understands why folks don’t want to do it.

“People are just so exhausted emotionally, mentally, physically,” she says. “They don’t have time, they’re busy. They don’t want to have to go out every night. And sometimes they end up with pen pals, they can’t even get the date, they’re talking to someone on Bumble for a month and then they finally meet and he’s nothing like the photos.”

Kind of a bummer, but it’s true that the more work you put in, the more likely something will actually happen. Love doesn’t just come to you. You have to go out and look for it.

The busy life and the dating app drag is real; why would you prioritise dating? Because if you don’t, you’ll be stuck in your routine of no dates, says Conti:

They are using the apps but go on for a day, do a bunch of swiping, and then ghost anyone who reaches out to them because they get caught up in their daily stressors of life.

A ghoster is just someone who got caught up in their Pilates class, apparently. If you want to date, set aside time for new people and new experiences. Or at least check out a different mimosa spot on the weekend. 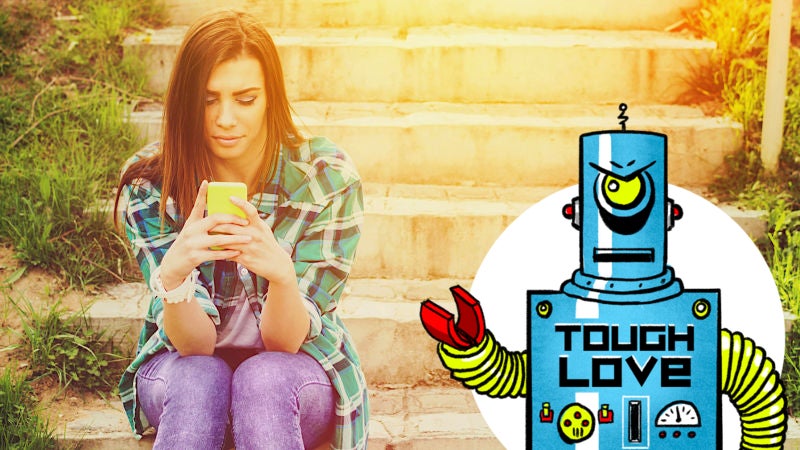 Some people have problems that require delicate advice from a qualified professional. Others just need a random a guy on the internet to kick 'em in the teeth (with honesty, that is). I'm the latter. Welcome back to Tough Love.

Conti says a lot of people come to her with a very specific mental image of who they want to date in mind, even a specific person. Ultimately, matchmakers focus on the heart of what their clients really want, beyond height requirements.

Apps are difficult, because these aren’t things we know from most profiles — maybe we aren’t even ready to know those things on a first date. However, apps give us the impression that our exact vision is out there if we keep swiping, which is bad for ever meeting anyone.

The apps give a false illusion of there being limitless singles just a swipe away, but the problem with the apps is that they give people the mentality that a perfect person is out there and is just another swipe away, so singles are not valuing the person right in front of them. It is also a whole lot easier to get rejected on an app than rejected in person, so a lot of men are failing to approach women in real life.

She adds, “There’s so much more I wish people would open their hearts and minds to. That happens when you meet someone in real life because you get their vibe, but swiping is a different story.”

Some things will always be deal breakers and that’s fine. But if you haven’t swiped right on anyone in a while, reassess what it is you’re looking for.

Learn To Be A Better Dater

Matchmakers asks members to log a certain number of hours in “date coaching”. That includes a body language expert, who will teach you courtship signals and help you present yourself as a more relaxed and open person. There are some common issues that Conti sees a lot in men and women.

It’s wise not to put so much pressure on a first date that you create impossibly high expectations. You’ll only make yourself nervous and likely make your date uncomfortable. But have we gone too far the other direction? It’s time to stop treating every first date like the first pancake in the frying pan. Do not feed it to the relationship dog.

Conti thinks people who have been rejected or had their heart broken subconsciously bring defensiveness into a first encounter, even one they’ve paid to be set up on. That means they’re “not being the best version of themselves” or having fun getting to know someone new.

“They’re putting their stuff on the other person and thinking, ‘Oh, he looked at me in this way, he looked at my little love handle,’ or whatever it might be. I’m just such a big believer in flirting. If more people flirted in the world, it would be such a better place,” Conti asserts.

But for more specific issues, she says men often talk about past relationships on their dates as a form of validation, to prove they’ve been desired in the past. It’s apparently a huge turnoff for women, which I understand. No one wants to hear about the model you were with one time. Good for you, though.

Conti says women tend to “come from a place of negativity instead of positivity on a first date”.

A lot of women will put down on the table what their ex did wrong, what they won’t put up with in a future relationship, and generally come from a place of negativity because they are having a tough time dating. That said, there is nothing wrong with a single woman knowing what she wants in a relationship, and setting her boundaries early on in the relationship.

Boundaries are definitely good! It still makes sense that not all of them need to be known before the appetisers arrive. Overall, Conti says the best advice she can give to people on dates is to “flirt, flirt, flirt”.

“Go into your dates with an air of fun, lightness, and pretend as though you are on vacation mode,” she says. There are no guarantees, but the basic lessons of openness, intention and flexibility can benefit anyone looking for love.