There’s no doubt that Apple makes some of the most expensive computing hardware around. They charge a premium on the back of great build quality and an eye for detail that leaves many other computer makers in their wake. But when Apple sent me their latest 15-inch MacBook Pro for review I had to do a double take. When I checked the spec and price on Apple’s website I discovered the system I was reviewing was priced at $10,339. That’s a big jump from the opening price of $4,099. Here’s what you for more than double what my first car cost.

What Do You Get For Ten Grand?

The base level model retails for $3,499 with the higher-level model adding $600 for the faster CPU, upgraded graphics card and larger SSD.

My review unit came with

In other words, more than half the price comes from the SSD.

It’s important to note, as per iFixIt’s recent MacBook Pro 15-inch teardown that it’s not possible to upgrade the memory or storage after purchase as the processor, memory and flash storage are soldered to the logic board. If you’re planning to skimp on those items with the intent of upgrading later – forget it.

I’ve been using the MacBook Pro for about a month. Over that time, it has been the only computer I’ve used (aside from an iPad). Apple says the focus for the MacBook Pro is on meeting the needs of creative professionals and developers. While creative pros are a traditional audience for Apple’s gear, the focus on developers is behind the expansion in memory capacity they say. That allows software makers to run more virtual machines.

They’ve also added True Tone to the 2560-by-1600 display. This uses sensors to adjust the colour and intensity of the display and Touch Bar to match the ambient light so that images appear more natural. 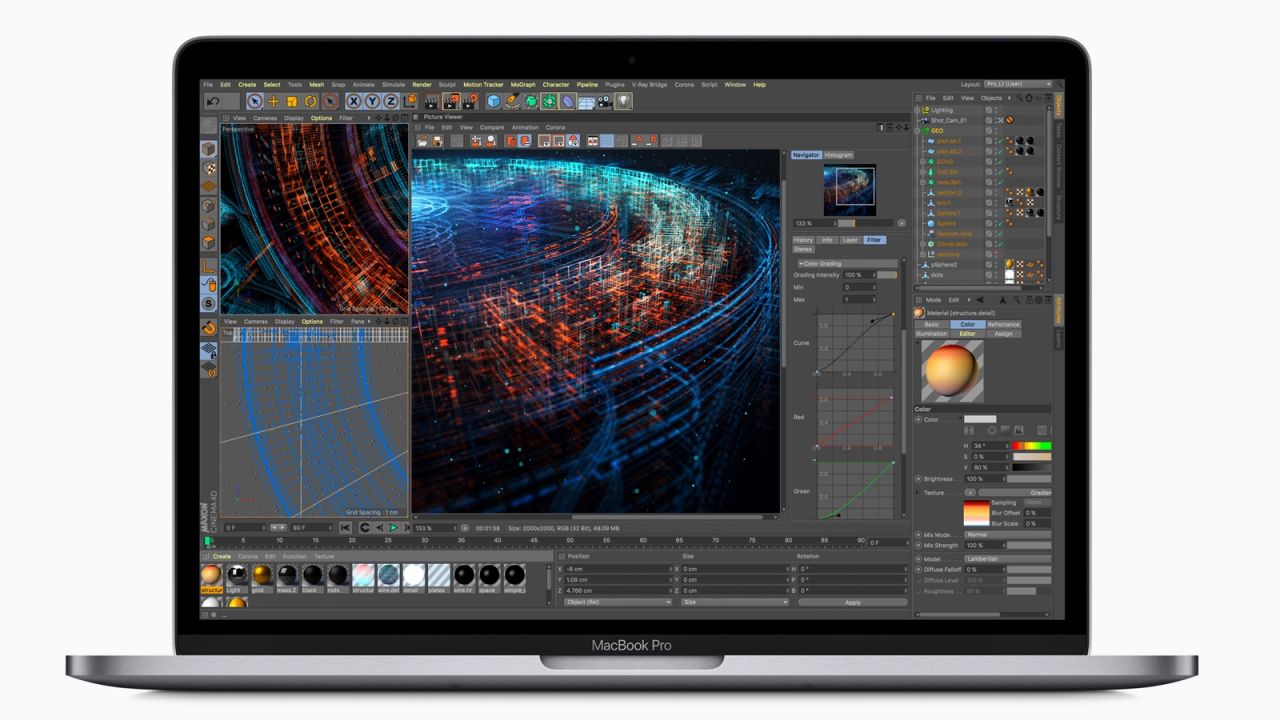 The Touch Bar houses a fingerprint scanner so you can use Touch ID to log into the Mac. The underlying security uses Apple’s bespoke T2 chip which is used for system security. As well as the Touch ID system, this protects the system’s boot process so the computer’s firmware is much less likely to be compromised. According to a support article, “During startup, your Mac verifies the integrity of the operating system (OS) on your startup disk to make sure that it’s legitimate. If the OS is unknown or can’t be verified as legitimate, your Mac connects to Apple to download the updated integrity information it needs to verify the OS. This information is unique to your Mac, and it ensures that your Mac starts up from an OS that is trusted by Apple”.

Apple says it’s also used to secure all data as it’s written to and read from the internal storage.

Apple copped some flak, deservedly I think, for issues with the previous generation MacBook Pro keyboard. The company says they have addressed those issues by adding a membrane under the keyboard that stops fine particles from interfering with the operation of some keys. The keyboard is also quieter, they say, although I didn’t have an older model to compare with.

I have never used a computer with as much computing power as this MacBook Pro. And, I’ll be honest, the spec is well in excess of what I need for my work. Most of my time is spent either typing, editing images, web browsing or in email and other messaging platforms. In practical terms, here’s what I found.

Keyboard: I reckon I’ve typed in excess of 10,000 words on this laptop and I’m still not sold on the keyboard design and feel. Keyboards are a very subjective thing and I’m really struggling to find the keys comfortable to tap on. The shallow movement makes it feel like I’m tapping against a solid surface after a while. And, the distance between the edge of the body and the keyboard, combined with the hard edge of the aluminium body resulted in my wrists often resting on a rather sharp and uncomfortable edge.

Trackpad: While on one hand I find the large expanse between the keyboard and the edge of the MacBook Pro’s body to be annoying, it does mean Apple has been able to include a massive trackpad. That’s really useful for quickly shuttling the cursor around the large, high-resolution display.

Touch Bar: The Touch Bar is a strange beast. I really like the idea of a dynamic region on the keyboard that provides contextual assistance when I need it. For example, when I’m using my preferred image editor, Pixelmator, I like that certain commands, such as Deselect, Invert Selection, and options for using different editing tools are readily available. But in other places, it’s almost useless. For example, the Touch Bar provides previews of different browser tabs open in Safari. But the previews are too small to be useful for shifting tabs.

Also, when typing, it offers predictive text but I find that far slower than actually typing the word I want. 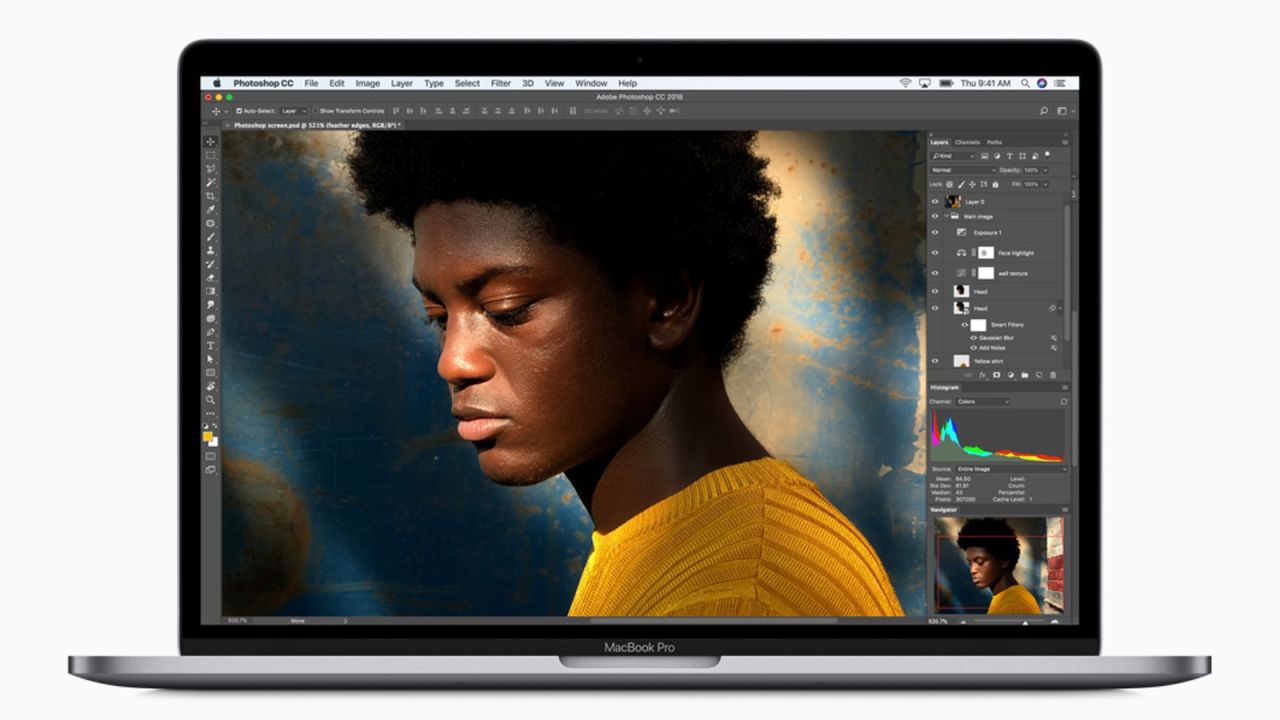 Performance: In the hands of a real power user, I suspect the MacBook Pro I tested would handle almost anything thrown at it. There was not a single moment when the system kept me waiting. I streamed Netflix to it over the 802,11ac, connected speakers over Bluetooth 5.0, copied files to and from the internal SSD, connected external storage using the four USB-C ports and ran a bunch of applications without a single hassle.

With Apple rectifying the software issue that throttled the fast processor, it’s unlikely that you’ll hit a processing bottleneck.

One thing worth noting is that while the 15-inch MacBook Pro uses DDR4 memory, the 13-inch models retain DDR3 memory. Apple says this is because the DDR4 uses more power. However, they’ve been able to increase the battery capacity of the larger model to compensate.

Battery Life: Apple says you should be able to get about 10 hours of use from the MacBook Pro’s battery. In normal usage, I was easily able to achieve that. Charging is via a USB-C port. And while that’s convenient, I’m disappointed Apple has ditched their MagSafe power connector.

Design And Finish While it’s fair to say the lack of legacy ports is a significant issue for some, Apple’s build quality on my review unit was exceptional. But it would want to be at this price. You really are paying a premium for a great build. And while you could match the spec with a less expensive laptop, you’d be hard pressed to find a portable computer as well made as the MacBook Pro.

A fully loaded 15-inch MacBook Pro is a $10,000 luxury very few computer users can afford. And I suspect there are very few users out there who really need it.

If you really had your heart set on the 15-inch MacBook Pro, I’d probably start with the lower spec model, with the 2.2GHz 6-core eighth‑generation Intel Core i7 processor, and then decide on how much storage I’d need. For many users, the lower spec graphics card and 16GB of DDR4 memory would suffice for several years but the lack of upgrade options for the storage means that’s where I’d prioritise my spending on extras.