How To Pick Your Pronouns On OkCupid

If you’ve been frustrated with the gender options on dating apps, you have may a new friend with benefits in OkCupid.

In late 2017, OkCupid made users give up their handles and forced them to switch to using their real names. Or at least a name that seems more real than “studhorze69”. The decision was met with a lot of push back, especially from the LGBTQ community, who were attracted to the safety of slightly more anonymity on the dating app’s former iteration.

OkCupid has just announced a new option that might bring some of those frustrated people back to the site: You can choose your gender pronoun as part of your profile.

The current drop down menu options are he/him, she/her and they/them, as the app announced on their blog Monday: 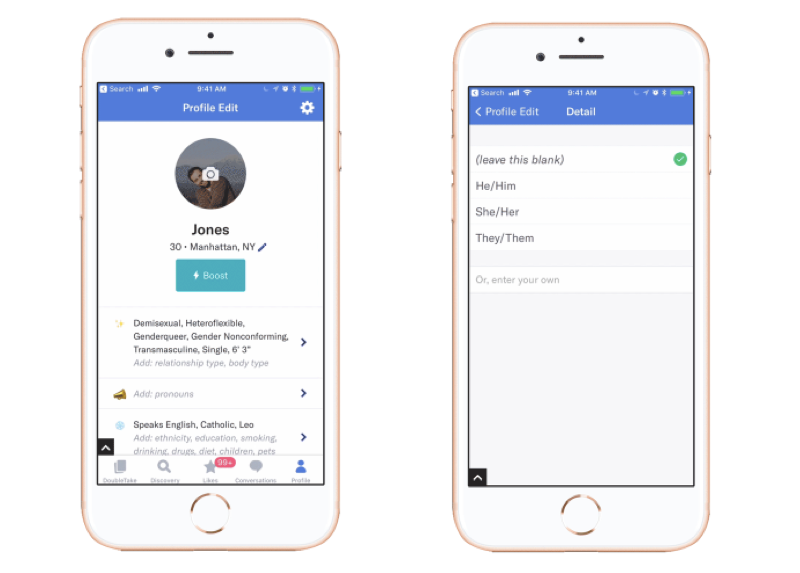 To access your gender pronouns, go to your profile and hit profile details. This is the same place you set your sexual orientation and relationship status. There are the presets above, but you can also type in “whatever pronouns you want — you can also remove pronouns here by selecting (leave this blank)”.

The new feature was made in collaboration with GLAAD, who shared this statement for the unveiling:

“Everyone should be able to express who they are, in their own words, and to have the opportunity to find romance with someone who respects and appreciates them,” said GLAAD Vice President of Programs Zeke Stokes. “By creating a dedicated space for personal pronouns on profiles, OkCupid has taken an important step forward that raises the bar for LGBTQ-inclusion on dating apps.”

OkCupid claims to be the first dating app to include gender pronouns as a detail you can set outside male or female. Seems like something Bumble and Tinder should swipe right on immediately.