The iPhone XS and XS Max are the latest devices to support High Dynamic Range (HDR) videos on Youtube, which is great news for those who own either. If you’re unfamiliar with HDR, it’s a video format with an expanded contrast ratio that makes colours more accurate and more vibrant than non-HDR (Standard dynamic range, or SDR) video.

HDR video has been around for a while, but it wasn’t until 4K TVs and 4K UHD Blu-Rays became more popular that more devices started supporting it. Unfortunately, just because a video is shot in 4K doesn’t mean it’s also HDR. This can make finding HDR-quality content difficult, especially free videos, which is where YouTube comes in.

YouTube has a decent amount of free HDR content available, but it isn’t easy to find since you can’t search YouTube for HDR videos specifically. For now, the best you can do is to add “HDR,” “4K HDR,” or even just “4K” or “UHD” to your search term. Some videos will say in the title if they’re HDR, but that isn’t always true.

To see if a video actually is HDR, open the video options while watching YouTube on an HDR-supported device. Click on the “quality” tab, and a list of resolution formats and frames-per-second (FPS) options should show up. If they include “HDR,” then you know they’re legit. 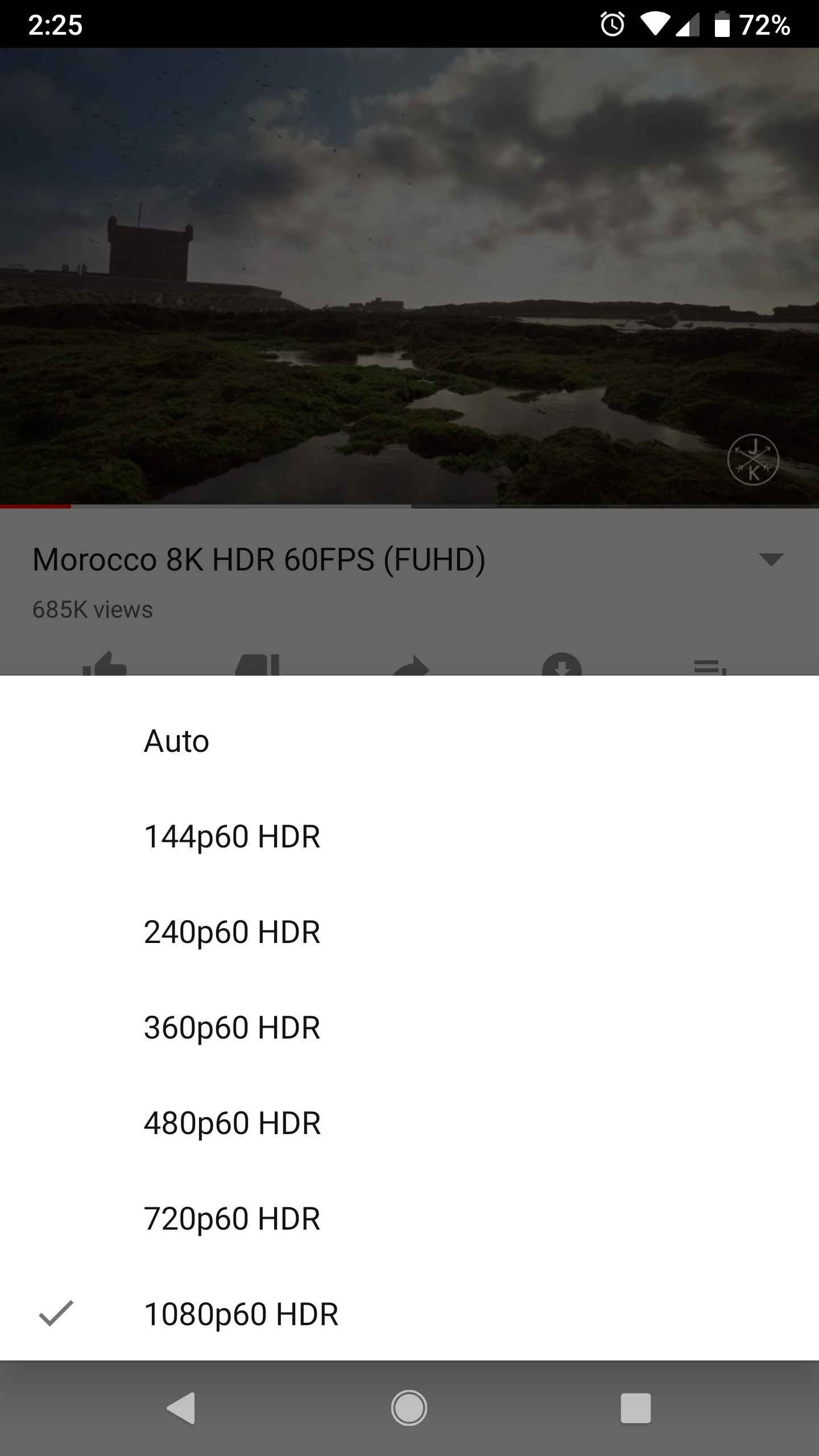 It’s an inelegant solution, but it’s the best we have for now. Google has said it’s waiting for more devices to support HDR and more HDR content to be available on the site until such a search filter will be added.

Maybe we’re just impatient, but we think there’s more than enough content out there to warrant an easy way to find HDR videos on YouTube. So, we’ve dug around to find some of the most popular HDR videos and channels so you can spend less time searching, and more time ogling all those colours. Also, be sure to check out the official 4K HDR channel, which curates and highlights excellent HDR uploads from various YouTube users.

Few things can show off the marked difference HDR makes like a beautiful landscape or sunset, which is why we’re starting things off with some excellent nature-based examples.

Perhaps the best source for exquisite nature shots on YouTube are travel documentarians Jacob and Katie Schwarz. Their professionally shot and edited videos rack up millions of views, and it’s easy to see why. Below are some highlights, and you can find more on their YouTube page, Jacob + Katie Schwarz.

A spectacular lightning storm is on display in this quick video from Dustin Farrell. The stormy skies show off HDR’s wide and subtle contrast capabilities, and make the flashes of lighting crackle with light and colour.

The Redwoods, by Abandon Visuals

Flying Over Norway, by Nature Relaxation

Need something a little longer? This hour-long video of drone-shot landscape footage from Nature Relaxation might do the trick. While this one focusses on Norway, the channel also has a 7-hour-long version featuring other countries, among other long-form HDR content.

Finally, this promotional clip from Samsung shows off some truly breathtaking time-lapse shots of striking locales around the world.

YouTube is chock full of talented, independent creators. Here’s a selection of short films, animations, and documentaries available in HDR.

This surreal animated short was created by the 3D modelling software studio Blender as a free Creative Commons project. Aside from the great HDR effects (clouds and textured fur catching subsurface scattering is HDR’s bread and butter ), the video has wonderful animation.

“The Legend of Solorzano,” by Abandon Visuals

This HDR clip from the Abandon Visuals studio is a short documentary about Eric Solorzano, a world-renowned Volkswagon Bug racer who competes in the Baja 1000. Its desert driving scenes really pop on an HDR display — like a real-life Mad Max.

This short film directed feels like a typical sci-fi-slash-psychological thriller. It also makes interesting use of desaturated backgrounds to make splashes of colour even more vibrant.

It might not be from a small studio or independent creator, but we’re throwing this on the list anyway. This short clip was created by LG as a way to show off its line of 4k UHD TVs. Its narrative isn’t interesting, but its dazzling visuals make it one of the best examples of HDR video on Youtube.

It’s actually quite easy to find HDR-quality gameplay clips on YouTube, since gamers can make recordings from their high-end PC graphics cards, Xbox One X, or PlayStation 4 Pro. Here’s a selection of videos featuring flashy and colourful gameplay:

Everything we’ve listed so far can be watched for free — one of the draws of watching videos on YouTube, HDR or otherwise. However, some premium YouTube Red content is also available in HDR.

If you’re feeling like watching something with a bit more real-world drama (that you can binge), YouTube’s original series Ultimate Expedition might do the trick. The show takes groups of reality TV stars and internet personalities out of their comfort zone, and challenges them with summiting Mt. Tocllaraju, a 6096.00m tall mountain in Peru.

Not only are you getting the entertainment value from watching people like Jukka Hildén, Steve-O, and SSSniperWolf climb the Peruvian Andes, you’ll get HDR-quality shots of some of the most stunning mountain ranges in the world. The trailer for the first season is linked above, but you can watch the whole series here, provided you’re subscribed to either YouTube Red or Google Play Music.