Manage A Lot Of Browser Tabs With This Chrome Extension

Chrome: If you do all your work in a browser, you can end up with dozens of tabs in one window. You could open new windows for different projects and shove tabs around, or develop the monk-like discipline to stop opening tabs. Or you could manage them practically by treating your browser like an operating system.

The Chrome extension Workona organises your tabs into named windows, which you can easily switch between and save for later. It’s like a sophisticated version of Chrome’s bookmark and tab-sorting features. And it rescues you from tab overload without punishing you for it. 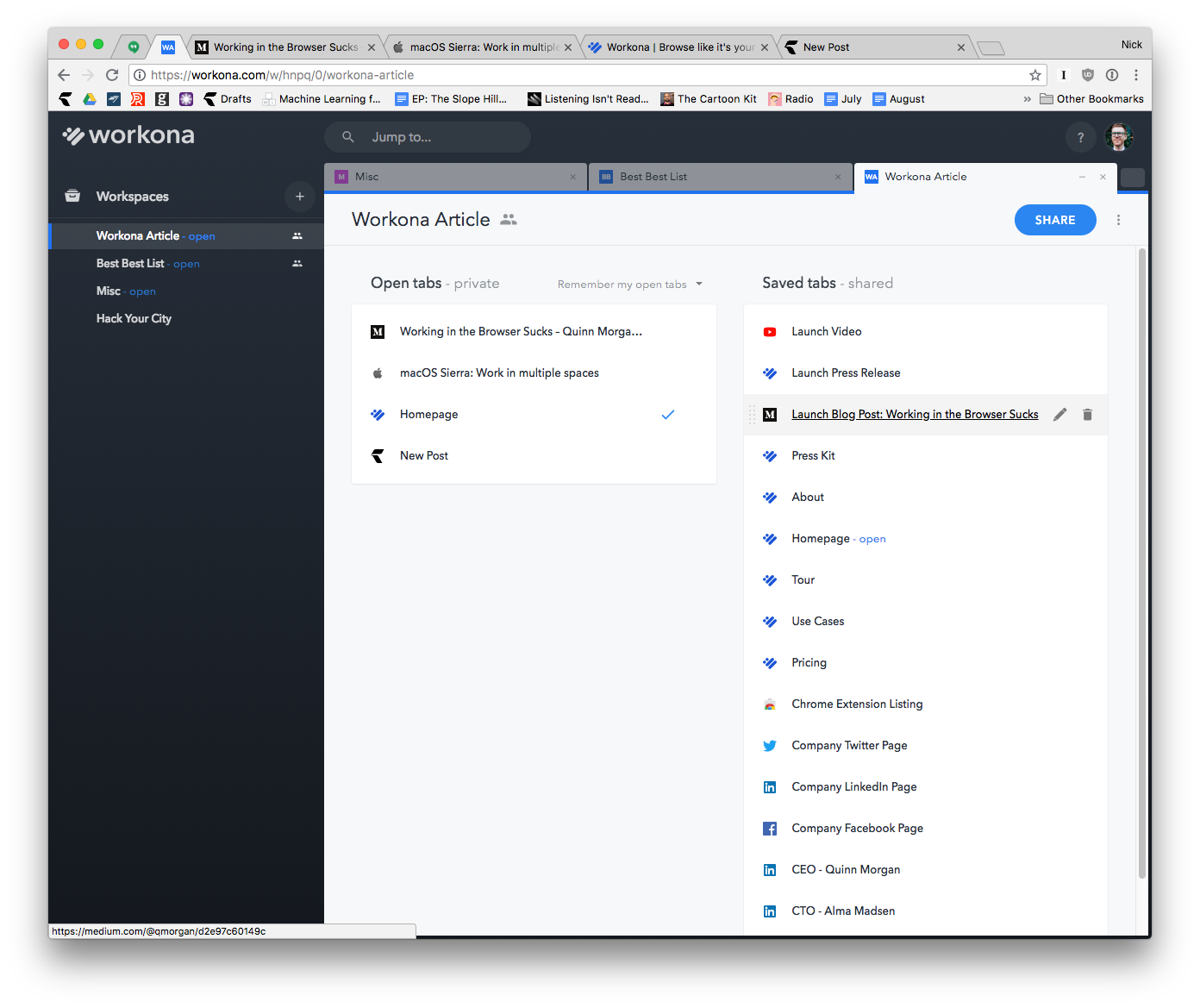 We’ve featured a lot of extensions that help you deal with tab overload, but many of them try to “fix” the habit of opening too many tabs.

The first premise of Workona is that it’s fine, even smart, to use many tabs; the real problem is that Chrome hasn’t given you a slick interface for managing those tabs. And unlike the similar extension Toby, Workona treats your tabs more like active workspace than an archive. I recently stumbled across the extension Toby (Chrome, Firefox), and I'm surprised at how much I love it. So much so that it has replaced the pretty Chrome Delight and Earth View from Google Earth extensions I've been using whenever I open a new tab. I'm one-hundred per cent Toby now, because it's one of the best ways I've seen to get a little more control over all those open tabs in my browser.

Workona’s second premise is that you can break your tabs into sets. Recently I had over 18 tabs open, which felt unwieldy. But it wasn’t that crazy: I had five tabs open for shopping for socks, three tabs for handling an insurance thing, 10 tabs for article research, and a handful of “assorted”. With Workona, I can split those tabs into different workspaces, and everything feels more manageable.

Workona’s main interface is a pinned tab that sticks to all your browser sessions. It displays your open tabs, as well as saved tab sets, in a new interface that works a lot like Google Drive. You can click different workspaces, and all the relevant tabs will load in the background. (Your pinned tabs stay pinned.) You can drag tabs from one workspace to another. And you can save tabs to your workspace, so that it doubles as a bookmark folder.

While the correlation between Workona’s interface and your actual browser session will feel confusing at first, everything works so intuitively that you’ll pick it up in a couple of minutes.

You drag tab titles like document titles to sort them into workspaces, or click the + button to save them like a set of bookmarks. And because you can read each tab’s full title, it’s easier to see what you’re doing. (According to creator Quinn Morgan, background tabs are temporarily frozen so they don’t take up as much memory.)

You might already use multiple windows and bookmark sets in Chrome. But Google hasn’t meaningfully updated those features in years, and they feel clunky. Dragging a tab in Chrome feels like tearing a screaming kid away from a party, and bookmarks are built for longterm storage, not constant reshuffling. Workona unifies and streamlines both in a way that feels respectful of your workflow. 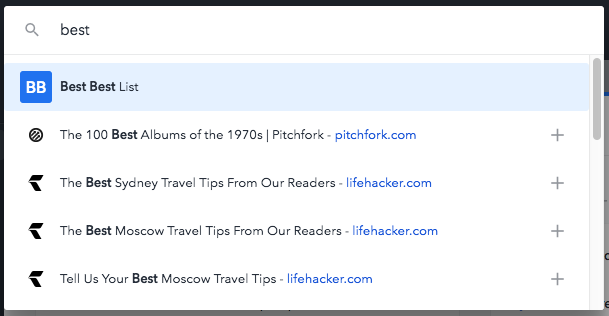 The search bar pulls from your tab sets and browser history, but not from your open or saved tabs, which doesn’t make sense. (Screenshot: Nick Douglas)

Get Used To The Workflow

Unifying tabs with bookmarks feels weird. Workona’s workspaces are linked to Chrome’s windows; its search is connected to your browser history. But saved tabs aren’t linked to Chrome’s bookmarks. I’m still getting used to treating tabs and bookmarks as two parts of the same process, and learning what disappears when I close a workspace.

Moving tabs out of the way might make you forget them. If you’re the kind of person who only tackles what’s immediately visible, you might rely on the stress of tab overload to get things done. But so far I’ve found that I come back to workspaces when I need them. And because the free version of Workona only gives me 10 workspaces, there’s a limit on how much clutter I can build up. (The upcoming pro version includes unlimited workspaces for $US6 [$8] a month.)

Once you’re in Workona, you’re in. As a Chrome extension, it sits behind all your browsing sessions (the data never leaves your computer). There isn’t really an “off” mode unless you disable the extension. I like that, because whenever I have too many tabs open, Workona is right there, waiting for me to sort myself out.

But when I have just a couple of tabs open, that extra pinned tab can feel a little annoying. I also don’t love that Workona takes over my “new tab” page.

If you use the same Chrome profile on multiple computers, then Workona will automatically download on all of them, like any extension. This lets you sync your browser sessions across all computers, which is helpful if you’re frequently changing devices, or if you sometimes work from home.

But if you like to keep strict boundaries between your work and home life, you probably use different Chrome profiles on your different computers, so (like any extension) Workona will stick to whichever computer you installed it on.

If you want to get rid of Workona, you can disable or uninstall the extension, close your windows, and you’re free. It won’t leave its hooks everywhere. After uninstalling extensions that littered my Gmail with specialised labels, this is a relief.

The way Google Docs lets you share documents, Workona lets you share tabs with other Workona users. You can share a set of saved tabs for each user to privately open, or you can share which tabs you’ve opened in realtime, for a synched-up browsing session. It’s more active than messaging links to each other, but less invasive than screen sharing. It’s useful for things such as comparison shopping with your partner or researching a group project.

The caveat is that everyone involved needs to have Workona installed. And that means everyone committing to this extension, or disabling it when the shared session is over. You can’t just send someone your tabs as an email, or use Workona as a web app without the extension. So it’s only worth getting everyone on board if they’re experimental geeks like you, or if you hope to use this longterm.