Is Google Home Max Worth The Money?

With great versatile hardware, powerful sound and the full resources of Google’s AI and Assistant software, the Google Home Max is more than just a better version of the original Google Home. This is an excellent quality, relatively compact speaker system that will likely be able to handle all your music, and can also act as a voice-activated hub for all your smart home needs.

When the original Home launched, being able to play music was just one of its talents. It did a reasonable job of it, but it wasn’t designed for serious listening. Since then, there have been a number of solutions to get a combined premium speaker and smart home device into your living room, (including Apple’s HomePod, a great speaker hamstrung by limited software). But the Max, arriving in Australia on August 9, blows them away in one hefty but elegant $549 package.

The Max has a natural-sounding signature with solid but not overwhelming bass, clear highs and absorbing mids. Party animals might be initially disappointed by the lack of bone-rattling bass, but that’s by design so the vocals and clear instrumentation always shines through. On certain tracks the Max will let you know it’s got more than enough woofer to go around — and if you have to you can adjust a simple equalizer in the Home app to make it more prominent — but on the whole the sound rich and balanced.

This thing goes louder than any other smart speaker I’ve heard too. It’s to the point where the phrase “Hey Google, turn it up all the way” should prompt the response “Okay, hold on to something”. It’s louder than you’ll ever need in your lounge room, but impressively the speaker takes it gracefully in its stride with no obvious loss of clarity. The bass stays restrained and in its proper proportions.

Even at 50 per cent volume — which, I’m sure, is still louder than my neighbours would prefer I blast ’90s nu metal at 5pm — you can tell there’s a lot of power driving this speaker. But its got smarts too.

The main reason the bass always stays in check is something Google calls “Smart Sound”, which is essentially a machine learning algorithm that adjusts the EQ on the fly based, in part, on feedback from six internal microphones. Theoretically, you should be able to stuff the speaker into some shelves or against a wall and it will still sound great.

Comprising two 18mm tweeters and two 114mm high-excursion woofers in a polycarbonate casing, covered with an “acoustically transparent” fabric grille, this is a big, 5kg box in an extremely minimalist design. Google says every part was custom designed by a team of audio engineers and experts in both the hardware and software space, which it put together specifically for the task. 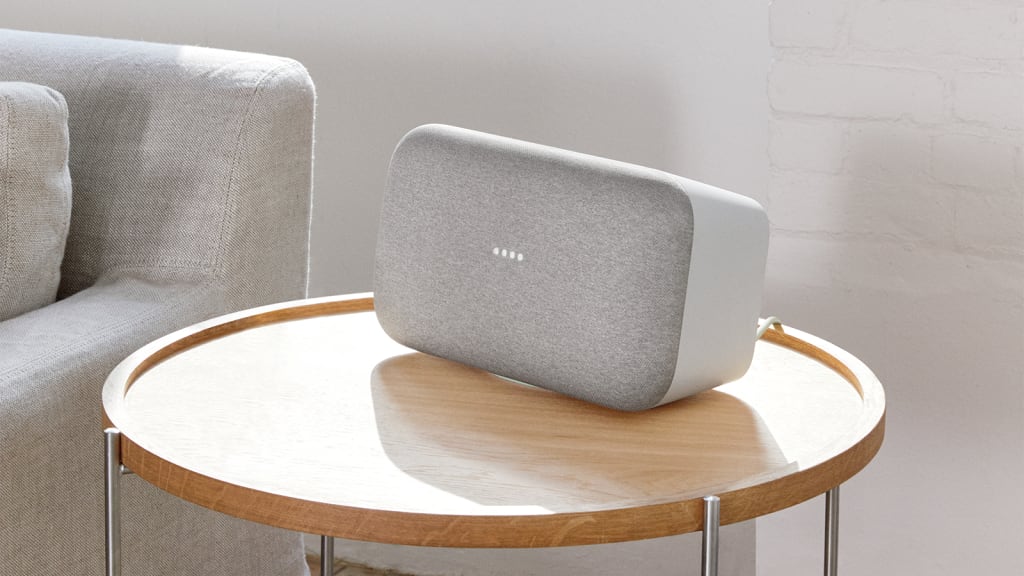 If you can afford two, the Max will wirelessly connect with a partner to make a stereo pair. A clever magnetic silicon base makes it easy to switch orientations. (Image: Supplied)

Of course when listening to music the sound is always going to depend largely on the source material, and Max has more ways to access high quality music than any other smart speaker.

As always, you can get music playing immediately just by asking for it. The Google Assistant is still the most capable and easy to talk to product of its kind, and Max will grab tunes from your Google Play Music, YouTube Music, Spotify or Deezer account (or from the radio) with just a few words from you. It can also tell the difference between your voice and your partner’s, and uses the right accounts accordingly, so a vague request like “play something recent” has a good chance of pulling up stuff you’ll like.

My favourite part about listening to Google’s music services this way is that you can ask for a single song and the speaker will just invent a playlist as it goes, which is generally excellent. You can also use voice commands for skipping or pausing, to add albums and songs to your library or ask for more details about the tracks.

You can still get music and podcasts via Wi-Fi through other apps, as long as they support Google Cast. Just fire up the app on your iPhone, Android or computer and send the stream to the Max. As a last resort you can also pair your device to the Max with your device via Bluetooth to play literally anything. The Max supports high-fidelity file types like FLAC, LPCM and HE-AAC, if you have them.

Finally, in a trick you won’t generally see on a smart speaker, the Max can accept an AUX input so you can physically connect a CD player, digital media player or anything else. I connected my turntable, and it works great (even if in most cases I was playing albums I could have just asked for with my voice). The sound is just as balanced at all volume levels as it is when playing from a wireless source.

All the smart home capabilities of its predecessors are here in the Max too, so you can do everything from simple Google searches to controlling your lights, or from setting reminders and reading recipes to calling up a title from Netflix on your smart TV. It will also read the news or manage your calendar (still only one calendar per person, which is annoying), and is way better at handling multiple request strings than the original Home was at launch. For example you can say “Hey Google, dim the lights, put the volume at 20 and play my sleepy time playlist”.

I’m sure purists would argue that for $549 you could make a good start on a proper system with an amp and bookshelf speakers, and then you could simply add an $80 Home Mini for smarts, and that’s essentially what I usually do. But I love having it all contained in a single device with the Max. The fact that it tunes itself no matter where you put it and will automatically switch to whatever source of music you want to use is a big bonus, plus it sounds as good as you could hope for a hi-fi system at this price.

Surprisingly given its size, it’s an elegant solution for adding room-filling sound and the best suite of smart home stuff to your main living area, and you can easily add other smaller Homes or any Cast-compatible speakers around the house to make a great multi-room setup. At $350 more than the standard Home existing owners might not be able to justify an upgrade, but the Max is currently the best-sounding and most fun to use smart speaker on the market.

Dealhacker: Get A Free Google Home Mini From Ebay

The Google Home Mini is an ideal starter product for smart speaker virgins. This doughnut-sized device can do almost everything its bigger sibling can including voice-activated Google searches, the ability to control connected devices in your home, the full version of Google Assistant and the ability to play music. </p><p>Normally retailing for $79, you can currently get it for free at eBay. Here are the details!