How To Uninstall Magisk And Unroot Your Android Phone

One of the benefits to running Magisk Manager on your rooted Android smartphone is that Magisk can hide root access from specific apps, which is helpful if an app won’t start because it detects you’ve messed with your device. However, some apps — such as Pokemon GO — now check specifically for Magisk when running, which undermines one of the software’s best features.

Since there aren’t many alternatives to Magisk, and none are able to perform all the same functions as Magisk, your only real option for catching critters is to remove Magisk (and root access) from your device. Thankfully, you have a few methods you can pick from: 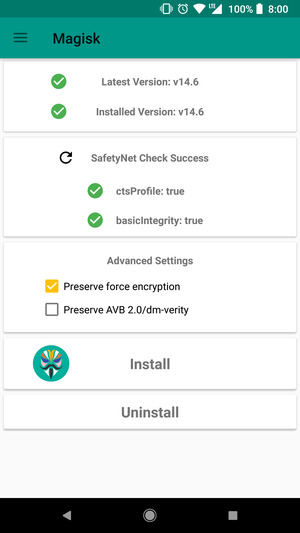 The first and easiest way to get Magisk off your Android device is to simply uninstall it from within the Magisk manager app.

Make sure you are connected to the internet, then open Magisk Manager from the app screen. Tap the “uninstall” button at the bottom of the home screen.

After this, Magisk Manager will download and run the necessary scripts to remove Magisk from your phone and restore your device’s original firmware. Wait for the process to complete, and you’re finished!

Similarly, there is a Magisk Uninstaller Utility available from the XDA developer forums that will perform the same task as above. It’s also a great alternative for those who can’t access the internet on their device for whatever reason.

To run the utility, you’ll first need to either download the software directly onto your phone, or download to another device, such as your desktop or laptop computer, and transfer the files to your phone manually. Then, boot the phone to custom recovery such as TWRP and open the uninstall zip file.

The whole process can get pretty complicated, but the official Magisk website has detailed instructions on how to mount and run the uninstallation in TWRP.

How to get rid of your device’s root

With Magisk uninstalled, the next step is to undo the root itself. The good news is that there are many ways to do this, and they’re all surprisingly simple.

Using a file manager with root access (such as MiXplorer or ES File Explorer), you can manually remove the root files.

We’ll first be finding and deleting the files labelled “busybox” and “su”, both of which are saved in your phone’s main drive. They will be located in one of the two following directories:

Once you’ve found “busybox” and “su”, delete them.

The final file we need to remove is in “system” > “app”. Open that folder and delete “superuser.apk”.

Close the file explorer, and restart your device. After it’s done rebooting, you’ll have successfully removed the root from your device and it should be back to normal.

Another method is to use the SuperSU app. This is probably the best way to restore your phone if you don’t like mucking around in your phone’s system files.

To remove the root this way, open the app. In the settings tab, tap “full unroot”. After that, it’s just a matter of following the on-screen prompts when necessary, and the rest will be handled by the app and your phone. At the end of it all, your phone will be successfully unrooted.

The last method you can use to get rid of your root is to install either the newest official system update or reinstall your device’s stock firmware.

Downloading and installing your smartphone operating system’s the latest update will usually remove the root files from your device, and it’s a fairly easy procedure. However, it will require you to manually find and download the update file.

Similarly, you can simply undo the root by reinstalling your phone’s stock firmware. This method is going to be different for everyone, as every phone has different firmware and will require bespoke steps to complete the installation process. However, an internet search such as “[phone model] firmware restore” will likely point you in the right direction.