How To Send Confidential Emails From Your Phone Using Gmail

appsgmailgoogle
To sign up for our daily newsletter covering the latest news, hacks and reviews, head HERE. For a running feed of all our stories, follow us on Twitter HERE. Or you can bookmark the Lifehacker Australia homepage to visit whenever you need a fix.

Android/iOS: In April, Google brought a new confidential mode to Gmail’s desktop version, allowing you to send emails that automatically expire. The idea being that if you use Gmail to send confidential information (which let’s face it, isn’t the safest idea), then using the confidential mode will make that decision a little bit safer.

It's been speculated for some time that Google has been working on some updates for the web-based version of Gmail, and the company is officially moving from tease to truth with its announcement this week.

Messages can be set to expire after a specific period of time such as a week or a month, and the sender can decide to revoke access to them whenever they want. You can also password-protect an email so that the recipient will need a code sent to them via SMS in order for them to open the email in the first place.

Now, Google has added the feature to its mobile app as well, XDA Developers notes.

Want to give it a try? Here’s how to make it happen on mobile. The same instructions work for both the Android and iOS version of the app:

Open the Gmail app and then compose your message. Within the message, tap on the hamburger menu from top right (the three dots stacked on top of each other) and select “More” followed by “Confidential Mode”. 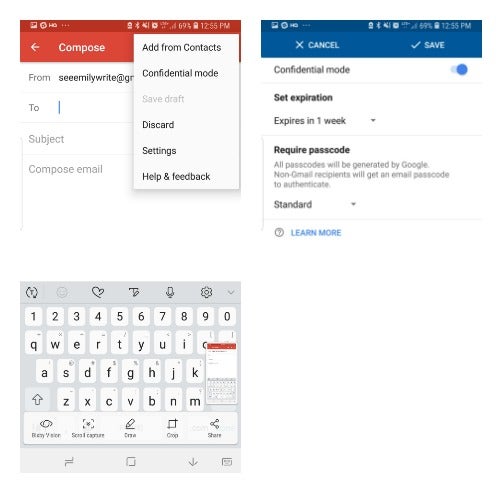 When you select Confidential Mode the app will launch a menu page where you can select the expiration date for your message or create a passcode (which can be SMS or not) for it. If you’ve changed your mind about sending a message confidentially, you can also toggle the feature off on this page.