Ever had a great idea for an app but don’t know how to code? In this article, we’ll walk you through the process of creating your own app by examining five software tools to get the job done.

There was a time when creating your own website, starting your own online store, or launching your own app would have required either advanced coding skills or enough money to hire someone with said skills. These days, though, enough companies have tools and business that make the process as speedy as an hour in some cases, and at minimal cost.

Sites like Wix, Weebly and Squarespace make drag-and-drop website creation a breeze, while Shopify and Woocommerce let you pop up a web store during your lunch break. Easy app creation has lagged a bit behind in this field, but that has changed dramatically over the course of the last few years. You can now use a range of sites to whip up an app in no time, without having extensive computer skills, and we’ll take a look at five of those sites below.

Of course, the kind of apps you get from these tools tend to be on the relatively simple side. You’ll still need to be able to code or hire an app-development company to create more complex apps and games. But for simple form- or information-based apps, these services will do just fine. Specifically, you’ll be able to create an app that might not make you millions, but they will add value to existing businesses or websites. If you have a content-based site or an online store, for example, you can create an app that lets people shop more easily or sort through your articles with a press of the screen.

Before we get on to comparing the services you can use to create your own app, you’ll need credentials as an app publisher, so that you can distribute and/or sell your creations.

To be able to distribute apps made for Android through the Google Play store, you need to sign in here with your Google account, accept the terms and pay a $US25 ($31) registration fee. To become an app seller for the iOS platform through the iTunes store, you’ll need to head here, pay a $US99 ($124) annual fee and sign in using your Apple credentials. After those initial fees, both Google and Apple take 30 per cent of sales once your app is published. AppyPie. The tagline for this web-based app builder is: “Make an app, easy as pie.” Say what you will about the slogan, but it’s accurate; you really can whip up an app on this site without too many clicks, or design knowledge. You start by choosing your app’s category, and then a basic layout. Then, by clicking through a demo of the app on a sample on-screen phone, you can adjust text, and add pages, colours, photos, media, links and more. You have pretty robust control over the flow and architecture of the app, and the site is extremely responsive.

Pricing ranges from a free plan that embeds AppyPie advertising in your app and only lets you tweak your creation for 48 hours, to $US15 ($19), $US30 ($37) and $US50 ($62) monthly plans that offer unlimited app editing and stepped-up platform distribution. The $US15 ($19) plan, for instance, allows you to build apps for Android only, while the $US50 ($62) plan will cover all the major platforms including Microsoft and Apple. 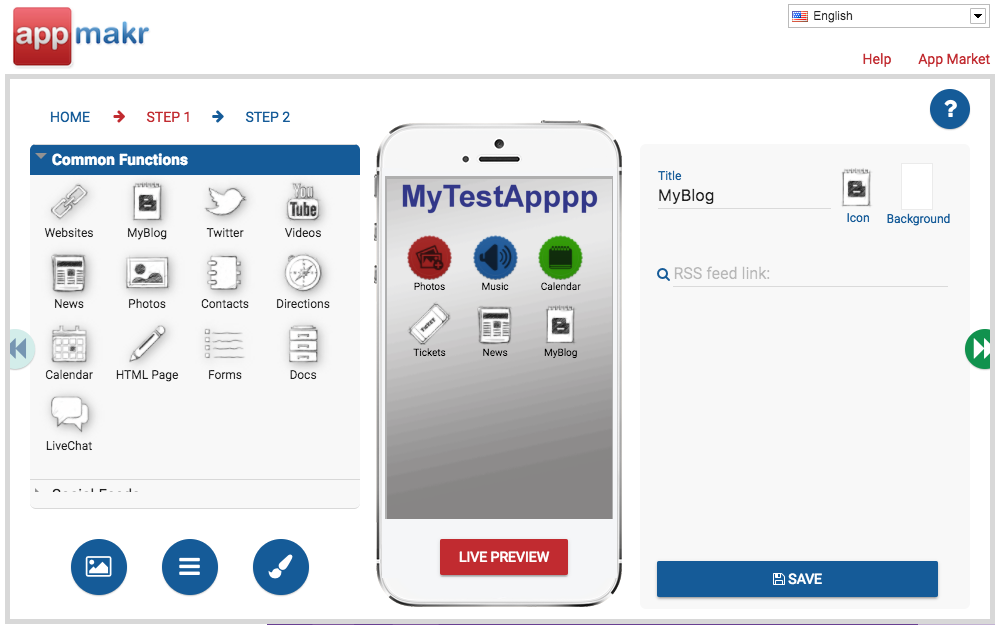 AppMakr. With a decidedly less-slick interface than AppyPie, AppMakr is nonetheless easy to use. It excels in making icon-based apps. Just like AppyPie, you’re given a mock-up of a smartphone and you’re able to drag icons directly onto its face from a menu of choices at the right. Unlike AppyPie however, apps built through this tool are better at linking to content rather than providing native content. Drag the “blog” icon over for example, and you’ll be asked to enter your blog’s RSS feed address. Same for the “news” function. But if you have an existing blog or website, this provides an easy way to take it mobile. You can also change the look of each icon and customise the background image. Changes to architecture, however, aren’t as robust as they are with AppyPie.

Using the free version of AppMakr will let you create an ad-free mobile website. Two dollars per month lets you develop an Android-only app with AppMakr branding; $US39 ($49) per month lets you create up to ten Android apps with no branding and lets you publish your app wherever you’d like, as you get the source code; and $US99 ($124) per year lets you publish an Android app in the Google Play store or an iOS app on iTunes with no branding.

AppInstitute. This is another extremely user-friendly online app builder. One differentiating factor is that when you begin your app-building process on this site, you’ll be asked to choose a template based on your goals, such as: “Sell Stuff,” “Get Bookings” or “Earn Loyalty.” After clicking on the tab that best represents your needs, you can further hone your app by choosing the proper category such as “church,” “coffee shop,” or “good cause.”

Another unique feature of AppInstitute is that after you choose your basic template, you can enter your phone number and you’ll be instantly sent a link to your pre-made app. Of course, you’ll want to spend some time making it your own, but it’s a fun feature to get the instant gratification of a working app in seconds. (Of course, it’s also a clever way by which AppInstitute gets ahold of your phone number.)

While AppInstitute is generally well-regarded, in our testing we did find that it was slow to respond, often glitchy and a bit counterintuitive in terms of customising your app. Still, there are good videos and a live chat service that can help you get rolling fairly quickly. GoodBarber. Despite its strange name, GoodBarber is a solid choice for online app building. It puts the smartphone mock-up front and center in its design ontology, so you can click through the app as if it were live and see your changes take effect immediately. While this makes understanding the logic of your app quite easy, it makes designing it a little more difficult.

Say you wanted to change a block of text in the app. It would make sense that all you would need to do would be to click on it. This, however, doesn’t work. Because the app is “live,” clicking on anything takes you to the relevant section of the app. To make changes to sections, you need to use the navigation tools at the right which break the design process into different chunks such as menus, icons and sections. This takes a little getting used to, and requires more clicking around than the other apps mentioned here, but once you get the hang of it, the level of customisation possible is truly impressive.

GoodBarber also offers app checking tools, so that before you are ready to publish an Android version of your app for instance, it would give you a checklist of completed items and those that still need to be fixed (such as naming your app). The site offers a 30-day trial after which it costs $US32 ($40) per month for an Android app and $US96 ($120) per month for Android and iOS. 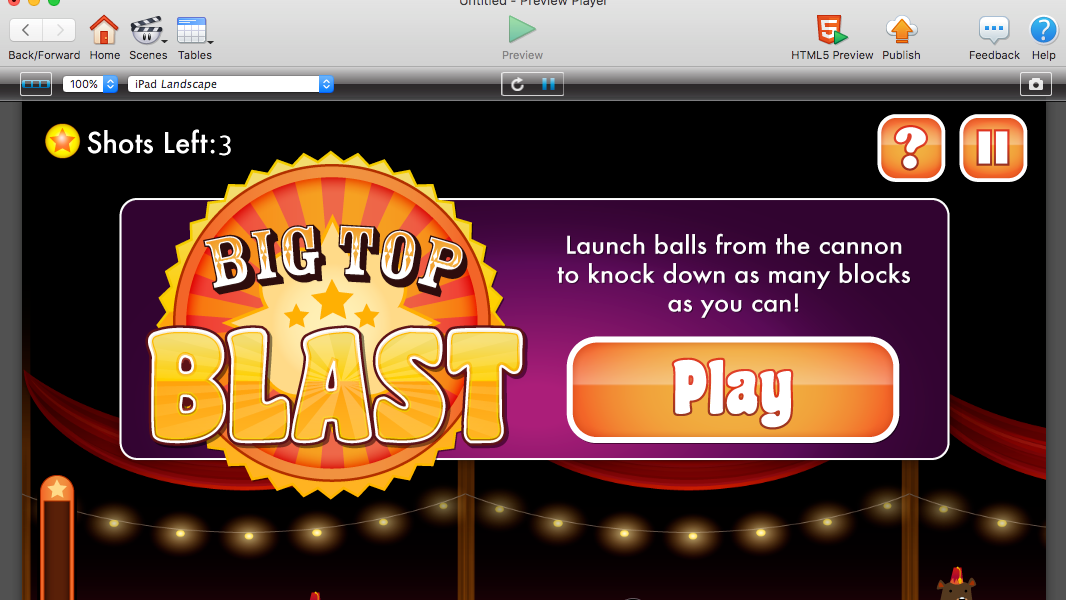 GameSalad. While information-based apps can help add value to your business, games offer you a chance to create an app that truly holds the potential to earn money. A quick look at the top-grossing iOS apps on website AppAnnie, shows that over half are games, with other top spots largely occupied by free entertainment and social media apps like Hulu, Netflix and Facebook.

If you want to make your own game and try to sell it through iTunes or Google Play, GameSalad offers a great way to give it a go. Unlike the other app creators in this list, GameSalad consists of software you need to download to your desktop. The company says that you could create a game in as little time as an hour, but in reality, it will take a bit longer — even if you start with one of their pre-made but customisable games. The software isn’t quite drag and drop, so you’ll want to spend some time going through the video tutorials to get a hang for the system.

When you are ready to publish your game, a fee of $US29 ($36) per month will get the job done and let you publish to all the major platforms including Android and iOS.

In our series Getting It, we’ll give you all you need to know to get started with and excel at a wide range of technology, both on and offline.