Why You Should Regularly Check Your Internet Speeds

If you aren’t checking your Internet speeds on a weekly basis, you might not know when there’s a problem. You aren’t likely to notice a difference between 150 Mbps and 80 Mbps download speeds when you’re browsing websites, watching (1080p) YouTube, or chatting with friends, but if you’re downloading a huge Fortnite update, why drive in the slow lane?

Speed tests aren’t time-consuming or tough to do 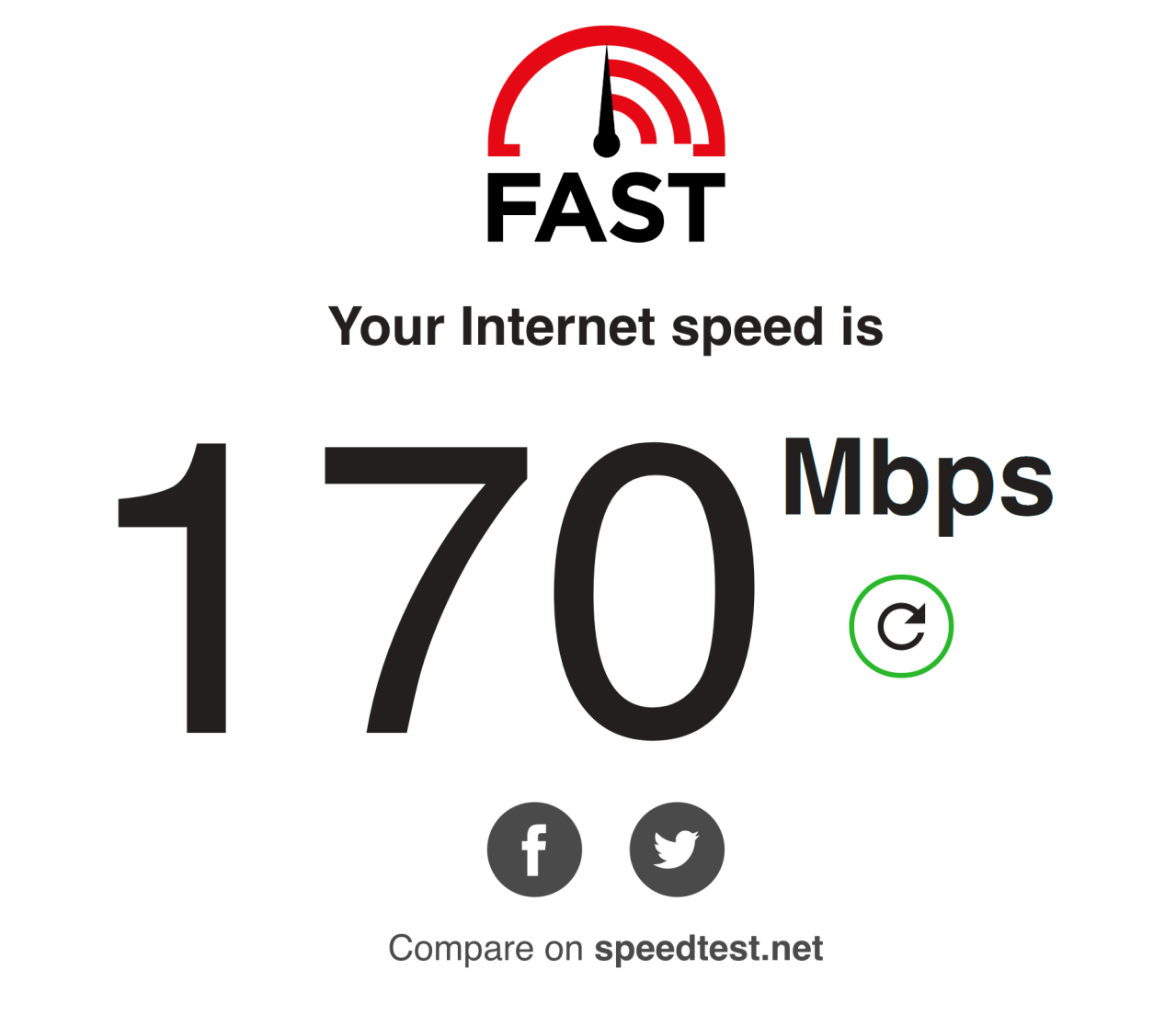 Most people can probably get away with pulling up Netflix’s fast.com test once a week or so, but there are a few caveats to consider before you start testing. To get a sense of whether you’re getting the right speeds from your ISP, you’ll first need to know what you’re paying for. (Call them up to ask if you forget.) For the purposes of this article, let’s assume you purchased the “speeds of up to 100 Mbps” package.

Grab your fastest device. Preferably, that’s a desktop or laptop that has a wired, gigabit connection to your router. A wireless-ac device will also work (like a pricey laptop or high-end smartphone you purchased at some point over the past few years), but only if you have a wireless-ac router to pair it with. If you’re using wireless-n for either, this test might not be very practical if you’re paying for faster internet speeds than what your devices can connect at.

In a perfect world, your router will do all the testing for you. You’ll find this kind of a setup on mesh systems like Google Wifi, which can measure the speeds between your router and your ISP and the speeds between the router and any device connected to it. Other mesh systems like Eero, Orbi, and Amplifi also have various speed tests built directly into their apps – and, depending on the system, might even automatically check (and graph) the speed of your connection once per day. 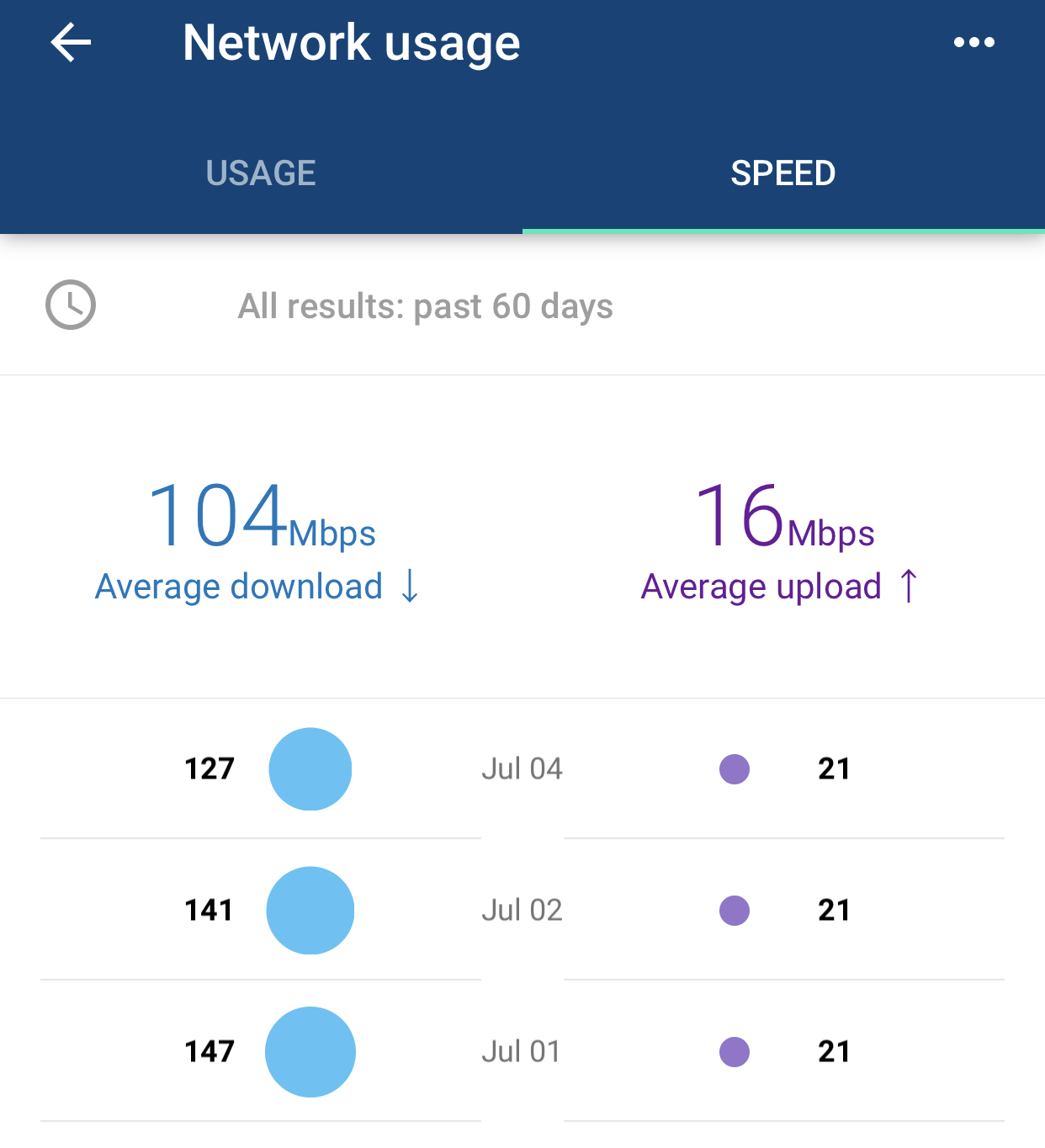 Google Wifi tests your ISP’s download and upload speeds every day, which is a great way to see if you’ve suddenly lost a lot of speed for no clear reason. (Screenshot: David Murphy)

Google Wifi tests your ISP’s download and upload speeds every day, which is a great way to see if you’ve suddenly lost a lot of speed for no clear reason.

What’s slowing down your connection?

The point of all this testing – and running your tests on the fastest connection you can get between your router and a device – is that you’re trying to find bottlenecks. If you’re paying for a 100 Mbps Internet plan, but you’re using older wireless-n devices with a crappy wireless-n router, you might find it hard to even reach a consistent 100 Mbps (or thereabouts) around your home or apartment – even if you’re sitting in the same room as your router.

If you’re connecting with a wired gigabit connection and only seeing 80 Mbps on a fast.com test, then there are plenty of issues that could be at play: Maybe your ISP is suffering some network congestion at the moment. Maybe someone has hacked into your system and is eating up your connection by running a huge BitTorrent server. Maybe fast.com is screwing up, and you should verify the results on another speed-testing site.

If you never get great download speeds from your ISP, but you’re paying them a small fortune for performance, that’s an entirely different story – one that requires a bit more troubleshooting. For now, let’s assume that everything is great and you’re getting exactly what you pay for… until your weekly testing pulls up a problem.

What to do with all your testing data

Regular self-checks of your network can give you the confidence that you’re connecting at your fastest speeds – or the nagging self-doubt that something is going wrong with your setup.

If you’ve done your testing and your download speeds are approximately the same as what your ISP’s plan calls for, make a mental note of what your tests typically report. Then, test your network in the same fashion once a week or so. If you suddenly notice a huge drop in speeds, you can perform a little quick troubleshooting:

If your ISP is at fault, give them an earful and figure out what, if anything, they can do to give you the network performance you deserve. And if all of these signs indicate the problem is on your end, the fun task of troubleshooting begins. You might have to replace your modem or your router. Maybe new wireless access points around your area are causing a lot of interference. Perhaps something is going haywire with the Ethernet port on your desktop PC. Maybe a recent driver update for your wireless card did something screwy. Your Ethernet cable might be going bad.

Though troubleshooting is not the most fun thing to do, at least you’ll know that you have a problem – which you might not have known before, since few likely pay attention to the speed of their internet connection as long as everything feels fast enough.

By checking your network’s speeds on a regular basis, you’ll always know if you’re getting the best performance.