calendarcustomizeextensiongooglegoogle calendarhoursworking
To sign up for our daily newsletter covering the latest news, hacks and reviews, head HERE. For a running feed of all our stories, follow us on Twitter HERE. Or you can bookmark the Lifehacker Australia homepage to visit whenever you need a fix.

Google’s updated version of Calendar — which you can no longer opt out of — is lovely to look at and easier to work with than its previous version. However, the omission of one major feature from Calendar’s new “material design” version seems to be annoying a number of users (including yours truly): The ability to block off hours when you’re sleeping.

In the last major iteration of Calendar, Google had a “Hide morning and night” feature in the Labs section of its Settings (which is also missing from Calendar’s current version). If you enabled it, you could then go back to your main calendar view and drag a little grey bar on the top and bottom to compact your calendar’s view.

In other words, you could cut those times of the day when you’re fast asleep out of your calendar, since it’s just wasted space. (I doubt many friends are coworkers are sending you 3AM invites, but you never know.)

Unfortunately, there’s no option to do that in the current version of Google Calendar.

If you sign up for Google’s G Suite, or use it as part of your work, you can set “working hours”, which at least prevents people from booking meetings with you when you aren’t planning to work. That still won’t compress your Calendar, however, and you’ll still have a big chunk of white space at the top of your calendar from around midnight to whenever you start working for the day.

You don’t have many options to address this, but you do have a few.

Grey out your unused hours

This won’t make a chunk of time go away on your calendar, but you can at least create a new calendar and set a recurring, daily meeting for your typical sleeping time — say, midnight to 7AM. Pick Graphite as the calendar’s colour, and then have the meeting repeat daily. 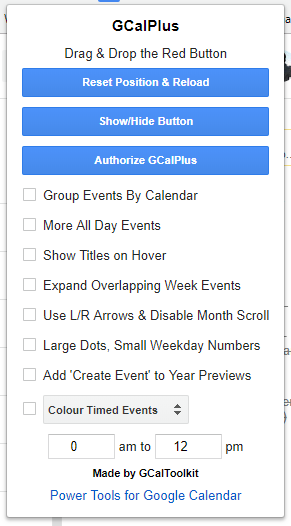 At least you won’t have a huge chunk of white space to look at any more, and your eyes can better focus on the colourful calendar items that take place during your waking hours.

Try the Google Calendar Plus extension

This extension, available for Chrome and Firefox, allows you to set the time your calendar starts. Bump up the hour counter from midnight, and the corresponding rows on your calendar will disappear.

In theory, the extension should also allow you to shrink your calendar from the bottom-up — dialling back from midnight and hiding the later hours if you go to bed a little earlier — but this is apparently a lot trickier to do in Google Calendar, as adjusting this setting doesn’t yet do anything in the extension. Here’s hoping its author can get this working soon.

Though plenty of people have already told Google that they’d like to be able to adjust their calendar’s displayed hours, perhaps Google needs even more feedback before it builds this (and Labs support!) into a future Calendar update. Let ‘em have it via this handy feedback form — and set a reminder on your Google Calendar so you don’t forget to do it.