Jobs site Indeed has released its 2018 list of the top 30 jobs. Technology roles feature prominently as do those related to building and construction, and health and medical care. The explosion in data use has translated into significant job growth in data science and related areas.

Indeed examined tens-of-thousands of job posts to identify well-paid roles that have seen remarkable levels of growth and present great opportunities for job seekers or those considering future career options.

The number one in demand jobis lead teacher, which has seen extraordinary growth over the past three years amid shortages of more senior level teachers with team leadership experience. The average base salary for a lead teacher is $92,723.

A full stack developer is a software design role that can require the skills to work at both the front and back end of application development. Of the jobs listed it also generates by far the most job posts (per million). Cloud engineer and IT security specialist also feature on the list.

There is also strong demand for those in the areas of health and wellness, with skills shortages particularly prominent in regional areas.

The list reveals the emergence of wellbeing manager roles, as employers place emphasis on providing healthy workplace environments. Wellbeing managers can be responsible for a range of programs and command an average salary of $110,518.

Registered nurses also are highly sought-after with oncology, primary care, maternity and clinical lead nurses all making the list with growth exceeding 150% over the past three years.

The Australian property and construction sector has also driven demand for a variety of roles, including trades, with lead carpenter and electrical foreman among the best jobs along with senior landscape architect, site engineer and survey technician.

Here are the top 30 jobs by demand: 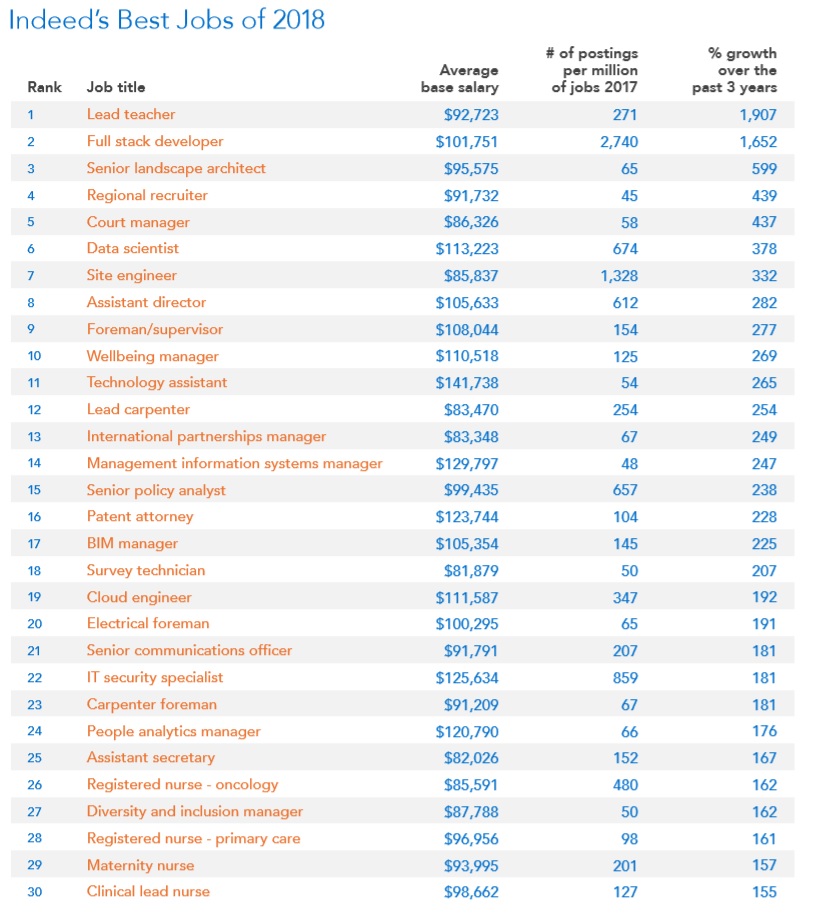 Ricky Fritsch, Indeed’s managing director Australia, says the list confirmed that the explosion in data use in recent years has translated into significant job growth in data science and related areas.

“Companies are becoming ever more reliant on the collection and use of data and those with the skills to manage and utilise it are in hot demand,” he says.

“The proliferation of online applications for instance had led to the rise of full stack developers, a role few would have heard of until recent times.

“It is also essential that businesses have systems in place to protect their sensitive data and this is creating new opportunities for the likes of IT security specialists and systems managers.”

“Those roles requiring that heavy human element, whether it be skilled tradespeople, medical professionals, including nurses and GPs or teachers working with students at a very personal level, are also less vulnerable to automation and should always remain in demand,” he says.