Sync Your Lights To Your Games And Music With This App

Windows/Mac: There are plenty of apps you can use to put on a little light show in your house (or geek den) if you’ve bought into Philips’ Hue ecosystem. My room is full of the company’s expensive colour-changing LED bulbs, and I’ve checked out a few of these apps, but generally don’t need to make my room look like an exploding volcano on a regular basis. These kinds of apps are fun for parties, but not all that practical for everyday use.

That said, I love Philips’ Hue Sync app — a free utility for Windows or Mac that lets you align your music, movies or gaming with your lighting setup.

First off, it’s practical: When I’m running my fifth Starcraft 2 co-op match of the day, I like to have something to keep me entertained. Having lights that match the general ambience of the maps I rotate through adds a fun degree of immersion.

Second, the Hue Sync app is so much easier to use than something like Razer’s Synapse 3 app (forever in beta, it seems), which also synchronises in-game activity with one’s Hue lights.

I found the entire process of configuring and using Synapse 3 with Hue lights so fussy, I eventually gave up on it. And that’s saying something, given that I’m always looking for a new, dorky way to make my room look like a rock concert when I’m gaming.

Third, Hue Sync works with absolutely everything. Sure, your games aren’t going to fire off customised effects a la Razer’s “I’m healing you in Overwatch and now my lights are having a seizure” setup, but the app analyses what appears on your screen and configures your lights to match the colours, like those ambient lighting setups people put behind their televisions.

Only, in this case, it’s your ceiling (or nearby lamps?) that’s making everything pretty. 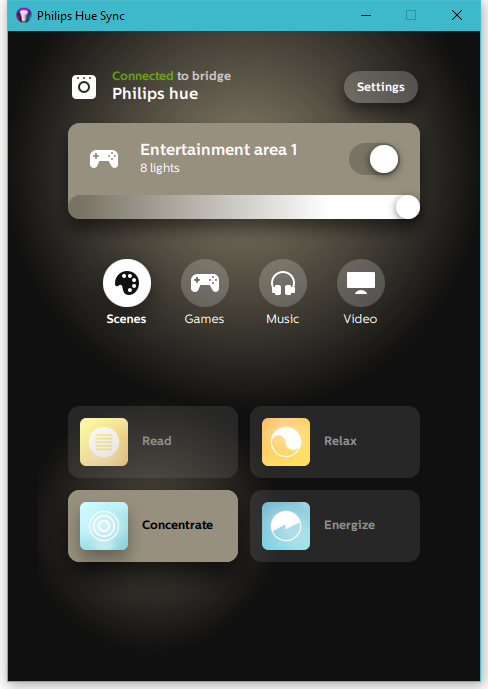 To get started, you first have to use Philips’ Hue app (iOS or Android) to create an “entertainment area”, that is, the specific lights you’d like to use for the Hue Sync app.

I found it more practical to leave a few lights on the normal setting I use in my room and configure the rest for ambient effects, rather than turning everything on at once.

In a murky game such as Diablo 3, for example, using every light you have might make you feel as though you’re gaming in a dark cave — a bit depressing when it’s daylight out.

Within the Hue Sync app, you then pick whether you’re playing games, listening to music, or watching videos. You also select how reactive you want your lights to be: Subtle, moderate, high or intense.

Select whether you want the app to also have the lights react to sounds it detects, and then hit “Start light sync” when you’re ready to go. Your lights will quickly turn the colour of whatever’s on your screen (in Games and Video modes), and off you go.

While the app works well enough to give you some decent, increased ambiance for your games and movies, it could still use a little fine-tuning for music.

There’s still a slight delay between drum hits and lighting effects in the app’s Music mode, and I’m not quite sure about the weird pattern my lights always try to create. I tested Hue Sync with a number of different songs — some where the beat is a little more amorphous, and some where it’s pretty defined — and I still never felt like my lights were reacting the way I’d prefer them to look.

Still, Hue Sync is free, it’s easy to switch on and off, and it gives you something interesting to look at. There are far more complicated apps and setups to make your Hue lights react to something you’re doing on your computer, but Sync does a decent job to make your games and movies feel that much more fun.