Show Your Kid That ‘No Animals Were Harmed’ In Popular Movies

kidsmoviesoffspringparentingscary movies
To sign up for our daily newsletter covering the latest news, hacks and reviews, head HERE. For a running feed of all our stories, follow us on Twitter HERE. Or you can bookmark the Lifehacker Australia homepage to visit whenever you need a fix.

Kids watch movies before they’ve fully learned what’s real and what’s fiction. (One Lifehacker writer used to think that when people died in movies, the actor died in real life.) So sometimes you might need to explain to them how scary scenes were just pretend, and everyone is OK. When those scary scenes involve animals, you can get help from the American Humane Association.

The descriptions, as BuzzFeed News editor Louis Peitzman points out, are soothing for adults too, and they don’t just cover kids’ movies. Here are some excerpts, with a few spoilers.

In a couple of the scenes where we see actors ride rhinos, they were actually riding horses, and the horses were turned into rhinos in post-production through CGI. ﻿

Amid soaring background music, the film begins with some spectacular footage of a pod of whales cavorting freely in the ocean. Before long, whaling boats appear and men set nets as they pursue and encircle the whales. One whale is separated from the rest behind a net and calls to the others outside. This scene was accomplished by editing documentary wildlife footage with scenes staged with animatronic whales.﻿

The actor and the dog had been prepped prior to the scene and were very familiar with one another. The dog had been taught to play a shoving game so when the actor pushed him the dog would jump back at the actor instead of away.

Harry Potter and the Sorcerer’s Stone:

For the very important delivery of Harry’s Nimbus 2000, a barn owl named Winnie carried a hollow paper broom — which actually weighed less than the owl’s natural prey — that was carefully attached to Winnie’s talons while a trainer held onto the broom’s release mechanism from off camera. At the right mark, the trainer released the broom from the talons with the catch.

A Wrinkle in Time:

In the scene where the kid sits on the kitchen counter and we see the dog lying on the ground, the dog was led to the predetermined mark on set. Prior to filming the trainer asked the dog to lay down and stay. Dog complies. They filmed the scene and the dog was taken off set for a treat and water. ﻿

Whenever Marley licks a person or object in the film, baby food was used to entice the dog to lick. The same technique was used with the diaper to encourage the dog to “get it.” All food was deemed safe for consumption, including the dog’s vomit, which was just dog food soaked in water.

For scenes in which Marley chews on items, such as the kitchen floor, couch cushions or car seats, trainers cued the dog to “get” the objects. One particular puppy and one particular adult dog were specially trained to chew on things and spit them out without swallowing anything.﻿

Jumanji: Welcome to the Jungle:

Smoke was not blown in the direction of the chickens.﻿ 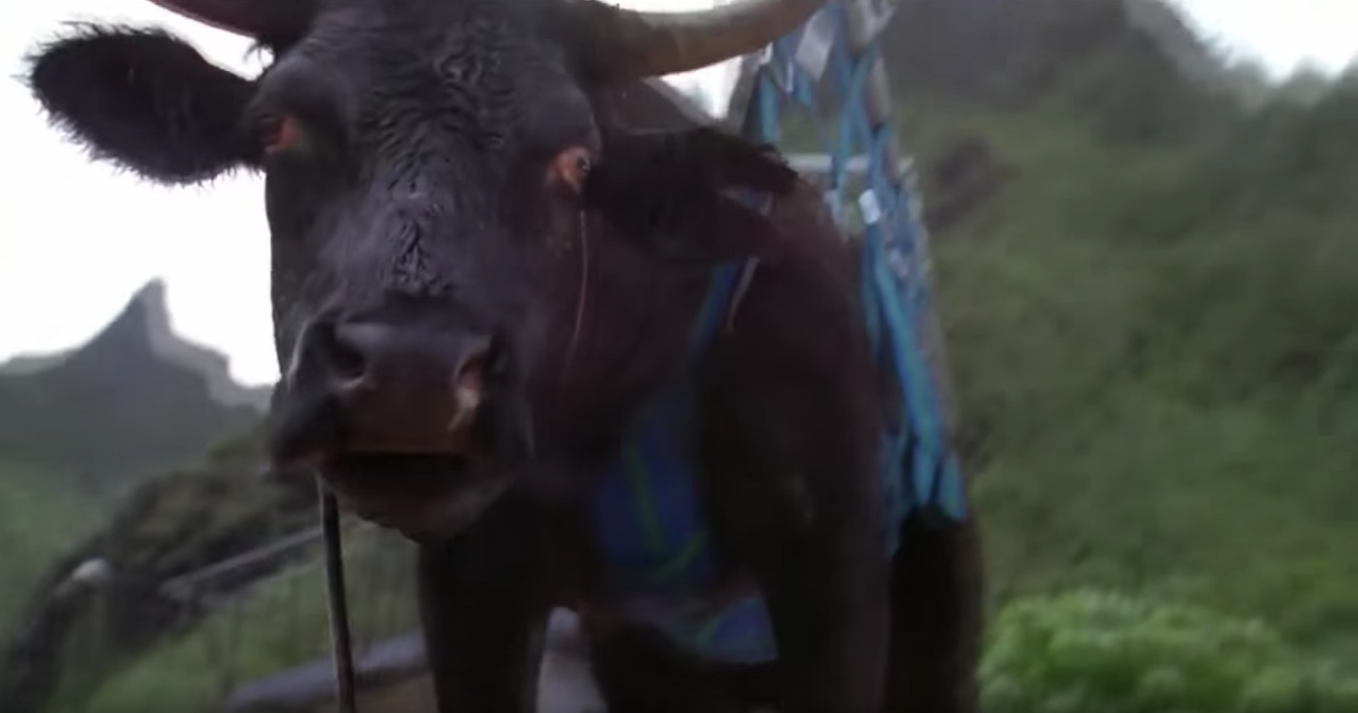 In a scene where an entire steer is fed to a dinosaur, a steer was harnessed in a special cattle sling, hoisted up by a crane, then lowered into foliage. The steer is not shown being devoured, but the effect is created with sound effects. The steer filmed for this scene is a very mellow animal. He had been prepped and rehearsed with it over a period of time prior to filming. The harness was the type normally used to move steer and was safe and secure.

The dead deer was an animatronic “fake” deer. Production provided a receipt for the fake deer.﻿

To create the scenes where snakes appear to crawl on the floor, a trainer placed one snake on the ground and let it crawl around while the cameraman filmed the action. Each snake was filmed separately and inserted into the film during post-production.﻿

In one scene Chance tricks Sassy onto a seesaw, where she gets catapulted through the air. This scene was done in many cuts. The seesaw lifted up to a height of about four feet and the cat was filmed on it. The cat was then filmed as she was tossed from one trainer to a blanket being held by several people. The cat seemed to love it and purred throughout.﻿

The AHA doesn’t monitor every movie, so check before you promise your kid an explanation.

And the association can face some controversy, such as when a video seemed to show a handler forcing an anxious dog into rough water during the filming of A Dog’s Purpose. A third-party investigation concluded that the video was misleadingly edited, and that while the dog wasn’t handled perfectly, he showed “no lasting stress response or conditioned fear of the water”.

If only watching Cujo at age five left “no lasting stress response”.