I’m Song Exploder Host Hrishikesh Hirway, And This Is How I Work

Hrishikesh Hirway pulls songs apart to learn how they work.

On his podcast Song Exploder, Hirway has interviewed artists such as Solange, Iggy Pop, Norah Jones, Björk and Arcade Fire about their writing, recording and mixing processes. Hirway makes his own music as half of the band Moors with Atlanta’s Lakieth Stanfield, and as a composer for TV and film. He also co-hosts The West Wing Weekly podcast with West Wing actor Joshua Malina.

We talked to him about how this multi-threaded artistic life weaves together. We also got a play-by-play of how Hirway makes each episode of Song Exploder.

One word that best describes how you work: Fussily

I’m a musician who moved to Los Angeles to make records and score films. After several years of doing that, I started the Song Exploder podcast, drawing on the experiences, tools and connections I had accumulated in that time.

I liked making a podcast so much that two years later, I started The West Wing Weekly podcast with my friend Joshua Malina, an actor who was in The West Wing, one of my favourite television shows. 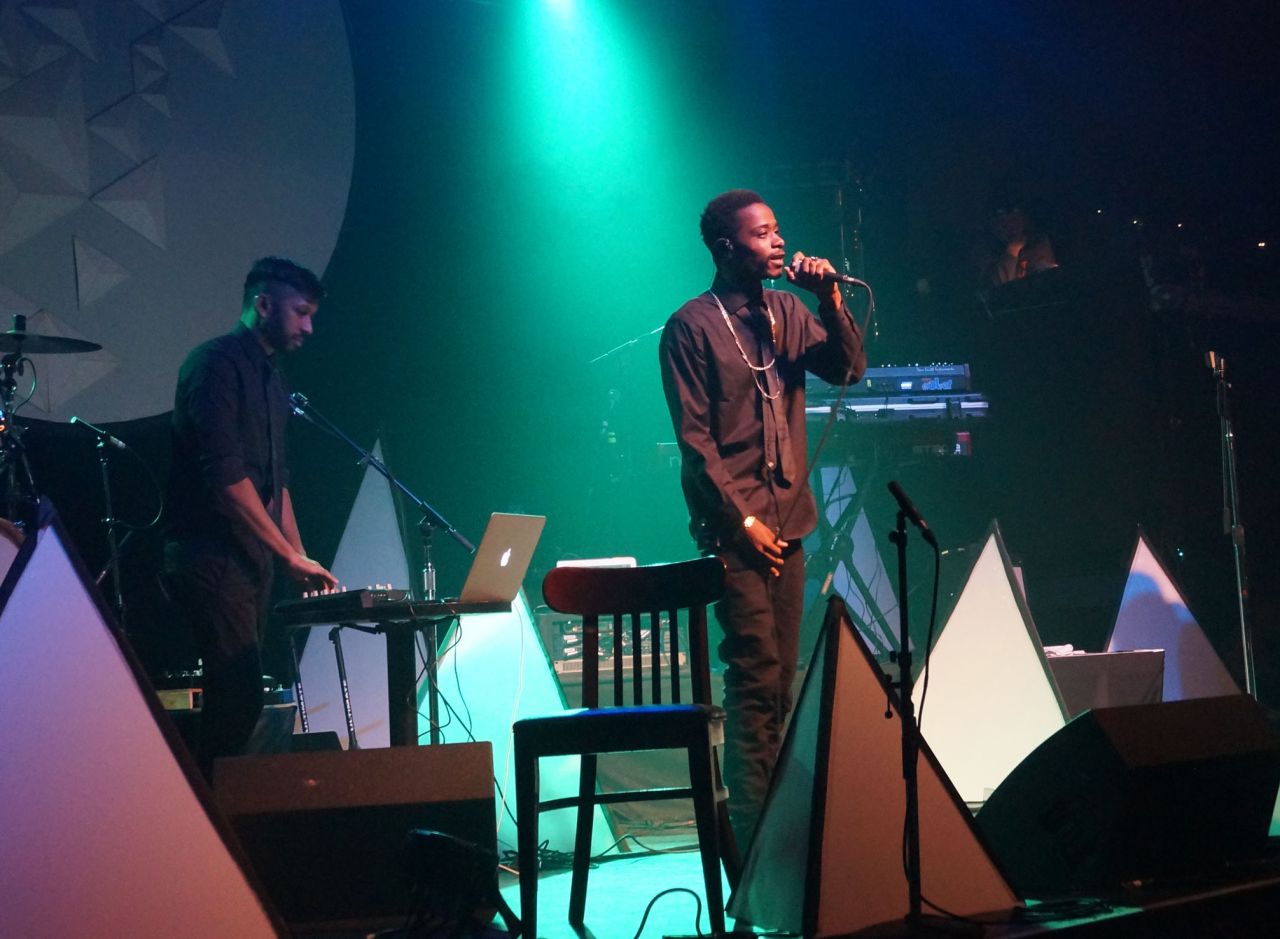 I woke up, looked at my emails, responded to some and sent some off. Most of them are around trying to book future guests for Song Exploder; either I’m getting pitched artists by publicists, or I’m pitching Song Exploder to publicists.

I ate breakfast while listening to some music that was sent to me to consider for the podcast.

I texted Josh about our recording schedule for West Wing Weekly.

I took a break and went to the gym, then came home and made lunch.

I went into the studio and recorded a couple of sponsorship ad spots for Song Exploder. I talked to Christian Koons, the assistant editor on the show, about the state of the current cut for the next episode.

In the early evening, I had a piano lesson.

In between all of these things, I’m peeking at Twitter and Instagram. I got an illustration for Song Exploder from Carlos Lerma, and then formatted his illustration for a template I’d made for graphics for the Instagram page.

After that, I more or less wrapped things up in the studio, and took my dog for a walk.

I had dinner with my wife, and in between watching an episode of The West Wing for work and a couple of episodes of The Americans for fun, I sent and responded to some more emails.

Around 1:30AM, I plugged in my phone for the night and went to sleep.

This is what it looks like when we record.

All the recording and editing for Song Exploder is done with Pro Tools. I also use Pro Tools, as well as Ableton Live, to make music.

I have a Tile on my keys, which I lose approximately once a day, so it comes in handy.

I keep track of everything in my life and work with shared Google Sheets. I have spreadsheets for future Song Exploder episodes, to do lists for songs in progress, a list of everything I’ve watched this year, my household budget, and a list of the best meals I’ve had this year at restaurants. 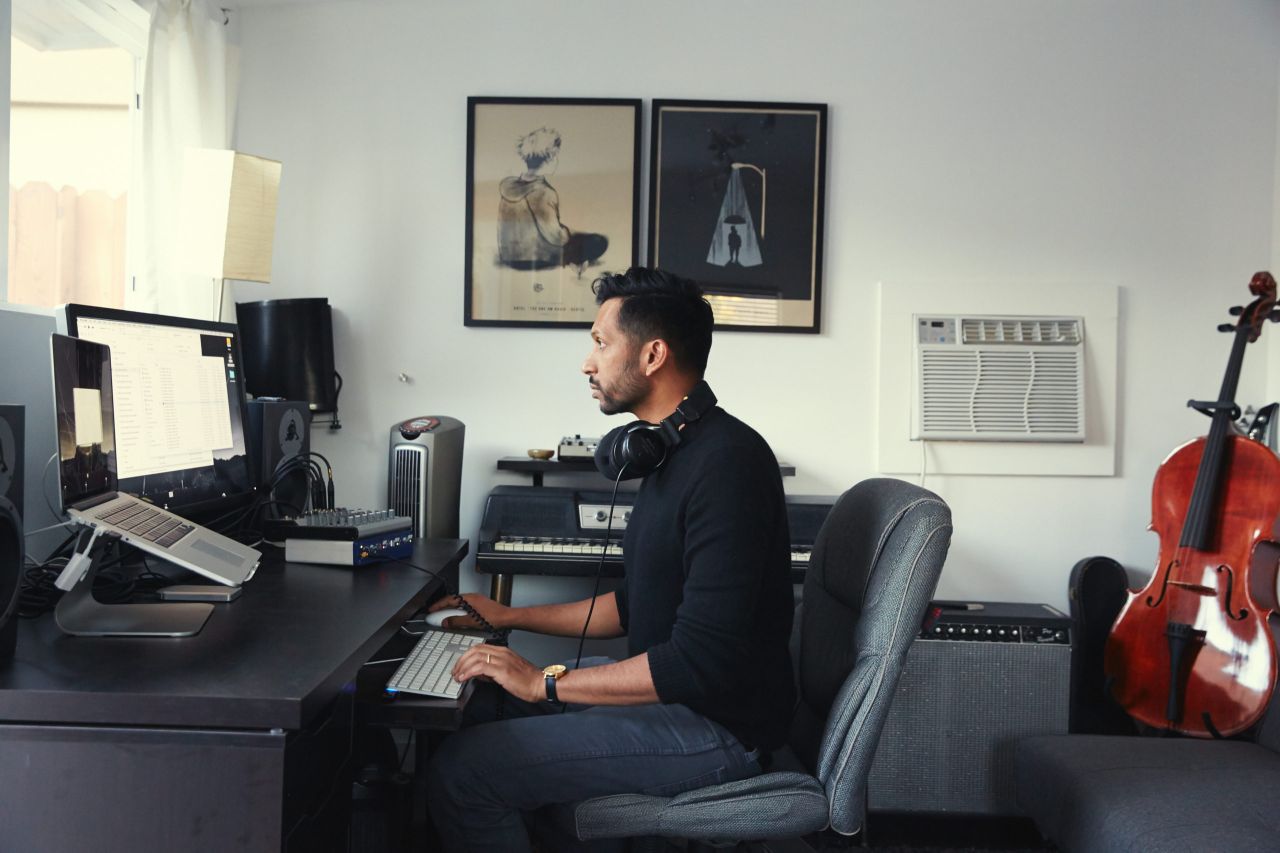 Half of my garage has been converted into an office, which I use as a studio to make my music and podcasts. If you walk in, you’ll see a bunch of instruments: An upright piano, an electric guitar and an acoustic one, a bass, a cello, a mandolin, and a xylophone.

There’s a desk — originally an IKEA desk, but I replaced the laminate tabletop with an actual wood one, stained to match the floors in the room.

On the desk, there’s an iMac Pro with a second monitor, an audio interface with a microphone and headphones, and a Thunderbolt hub connected to it. There’s also a Zoom recorder and a mic that’s always plugged into either it or the audio interface.

Behind the desk, against the opposite wall, is a couch where guests sit when they come to record interviews. There’s a lot of IKEA storage in the room, relative to its size, in an effort to keep some of the clutter hidden away.

What’s the workflow of creating an episode of Song Exploder?

I record interviews both in-person and remotely, depending on the artist’s availability. If it’s remote, we talk over the phone or over the computer, and they record their side of the interview on a nice mic and send me the audio file afterwards.

Then Christian or our intern Olivia will transcribe the interview and save it as a shared Google Doc. Now that I’m not the only person working on Song Exploder, shared docs are great, especially the “suggested edits” feature, so I can annotate sections with notes and reminders. (Here’s what it looked like when I was editing everything myself, before I started using Google Docs.)

#tbt to my desk last night, working my way through making the American Football episode.

Then we create a new Google doc with just the parts of the interview that will appear in the episode, and I try and put them together in an order that makes sense, adding notes about which parts of the music should be played where. It’s like putting together a jigsaw puzzle without knowing what the final image is supposed to look like.

Then we test that paper edit. Christian takes the script and does a draft of the episode in Pro Tools. I’ll go through and make revisions and notes on our Google doc: Cutting sections, moving lines earlier or later, starting music in different places, based on what I hear. We do this a few times, somewhere between five and eight rounds of revisions.

Then, when it feels like we’re pretty close, I go through the Pro Tools session and make final cuts and do a final mix—the most finicky stuff that’s too tough to communicate to another person (on paper or otherwise), because what I’m hearing is so subjective: Changing the length of a pause by a fraction of a second, changing the shape of a fade out on music, et cetera.

Meanwhile, we’re working out getting the music rights cleared by the label and the publisher, and illustrator Carlos Lerma creates an original portrait of the artist for the episode.

In honor of @chvrches' new album, I'm reissuing their 2016 episode about the song "Clearest Blue" this week. At the top of your feeds now! · · · [Illustration by @thatlerms]

Are there any surprising differences between composing for film and making your own music?

I don’t know if it’s surprising, but I’m far, far more productive when I’m composing for film/TV. I will do whatever it takes to get the music for someone else’s project done in time. But I don’t have that kind of discipline at all when it comes to my own music.

I’m not sure this is major enough to count as a life hack, but I find it really useful to make custom keyboard auto-correct/text replacement shortcuts on my phone for longer phrases that I have to enter in regularly, like my email address.

In the Keyboards setting on my iPhone, put in a three-letter term as a stand-in, like “eml”. When I type that, it gets replaced by my actual email address. It’s especially helpful for my home address: Three letters instead of typing out the whole street address, city, state, postcode.

Take us through an interesting, unusual or finicky process you have in place at work.

Everything about making Song Exploder is finicky, really. It’s heavily edited, in order to remove my questions from the interview, and make the answers as streamlined and articulate as possible.

But the finicky part comes from trying to mask that as much as possible, so it sounds to the listener like the musicians are naturally that logical and eloquent. That means spending hours trying to find the perfect cadence between words that weren’t spoken anywhere near each other.

For Song Exploder, Christian Koons is the assistant editor. He transcribes interviews and helps me with everything on the post-production side, from editing the episodes to posting them online.

On The West Wing Weekly, we have a team of two: Margaret Miller acts as a filter for us, editing our conversations. She then passes those edits on to us, and our mixer and audio editor, Zach McNees.

New episode out now with @natalialafourcade. Here's what it looks like from the inside! Go to songexploder.net to listen.

Google Docs, Google/iPhone calendar, plus reminders on my iPhone.

I pace in my backyard.

My whole life is side projects, cobbled together to make some kind of living.

I just finished Warlight by Michael Ondaatje, who is my favourite author.

Regarding my music career: “It’s not a race.”

You’ve got a device to record audio with you ALL the time — the Voice Memos app on the iPhone.

How to require less sleep.