I love my Samsung Galaxy Note 8. It’s fast, has a beautiful display, and it takes better pictures than any smartphone I’ve ever had. I hate the Bixby button.

I’ve given Bixby the ol’ college try a few different times since acquiring the phone, and ultimately decided that the assistant just isn’t for me. At least once a day (but more often 50 times) I manage to accidentally press the Bixby button on the side of my phone. Most often when I’m somewhere where my phone is ringing too loudly and I’m trying to silence it with the volume down button (which is inconveniently right above that Bixby button).

You can also disable it entirely. But, if you actually want that button to do something, there’s a way to remap it using the app bxActions. There are a few others ways to do this as well (most involve rooting your phone) but this is the easiest I’ve seen.

That said, to make it happen you’ll still need to go through a decent number of steps, so strap in. The app will show you visual demos as you go for a few of these as well:

First, make sure Bixby is fully enabled on your device and then download the app for Google Play and the follow the on-screen instructions to set the app up. When given the option, select “Get foreground app.”

When you select the foreground app option you’ll be taken to another page where you want to toggle “Allow usage tracking” to be powered on.

Afterward, you’ll go back to the previous page where you’ll now want to select “Get button events.” That will take you to a whole new page where you need to scroll down until you see “bxActions – Bixby button.” Tap on that, and the toggle the feature on at the top of the next page, then press “OK” on the popup that appears.

Tap the “Done” icon, which will take you to a new page where you want to select “Buttons.” Go through the same steps you just did to toggle on the “Bixby button” from that menu.

Afterward, go to the main page and then select “Actions” followed by “Bixby.” Then select “Standard action.” The app will then list all of the available commands you can remap your Bixby button to handle. There’s a decent number of options here, and if you cough up $4 for the premium version there are a lot more, including the ability to remap the button to take screenshots or launch Google Now. 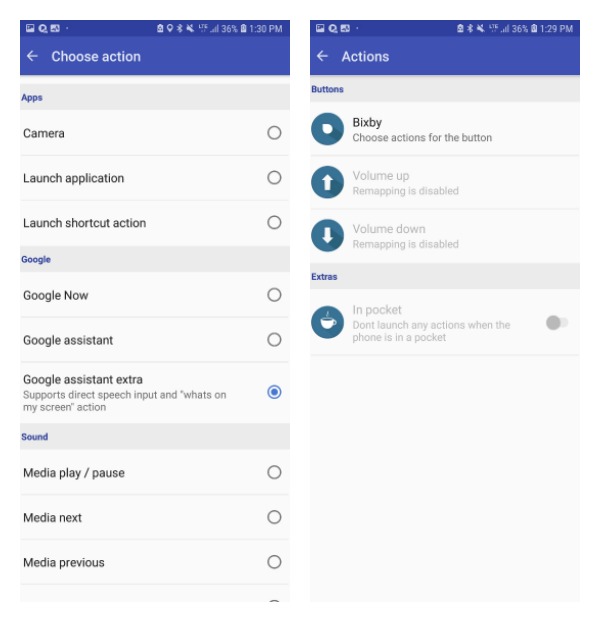 I went with “Sound mode” so pressing the button automatically silences my phone, since that’s typically what I’m trying to do anyway. You can also have the button launch your camera, launch an application you use often, or control media you’re playing back on your device.

That’s it! It definitely takes a few minutes to get set up, but once you do it’s oh so worth it.