How To Combine Siri Shortcuts In iOS 12 Beta For Quick, Silent Commands

During WWDC 2018, Apple showed us a new trick with Siri in iOS 12: the ability to assign shortcuts. Instead of hoping Siri properly understands what you mean, you can assign a specific phrase (or even a word!) to a set of predetermined actions.

A simple phrase like “heading home” can cue Siri to text your roommate, start your favourite podcast, and open directions in Maps, all at once. Unfortunately, Apple’s standalone Shortcuts app isn’t in the iOS 12 public beta, but there are still some similar shortcut features Siri fans can play with.

Setting up quick, single-action shortcuts in iOS 12 is easy. Just visit the Settings app. Under Siri & Search, look for the new Shortcuts section. You can’t miss it — it’s at the very top of the screen: 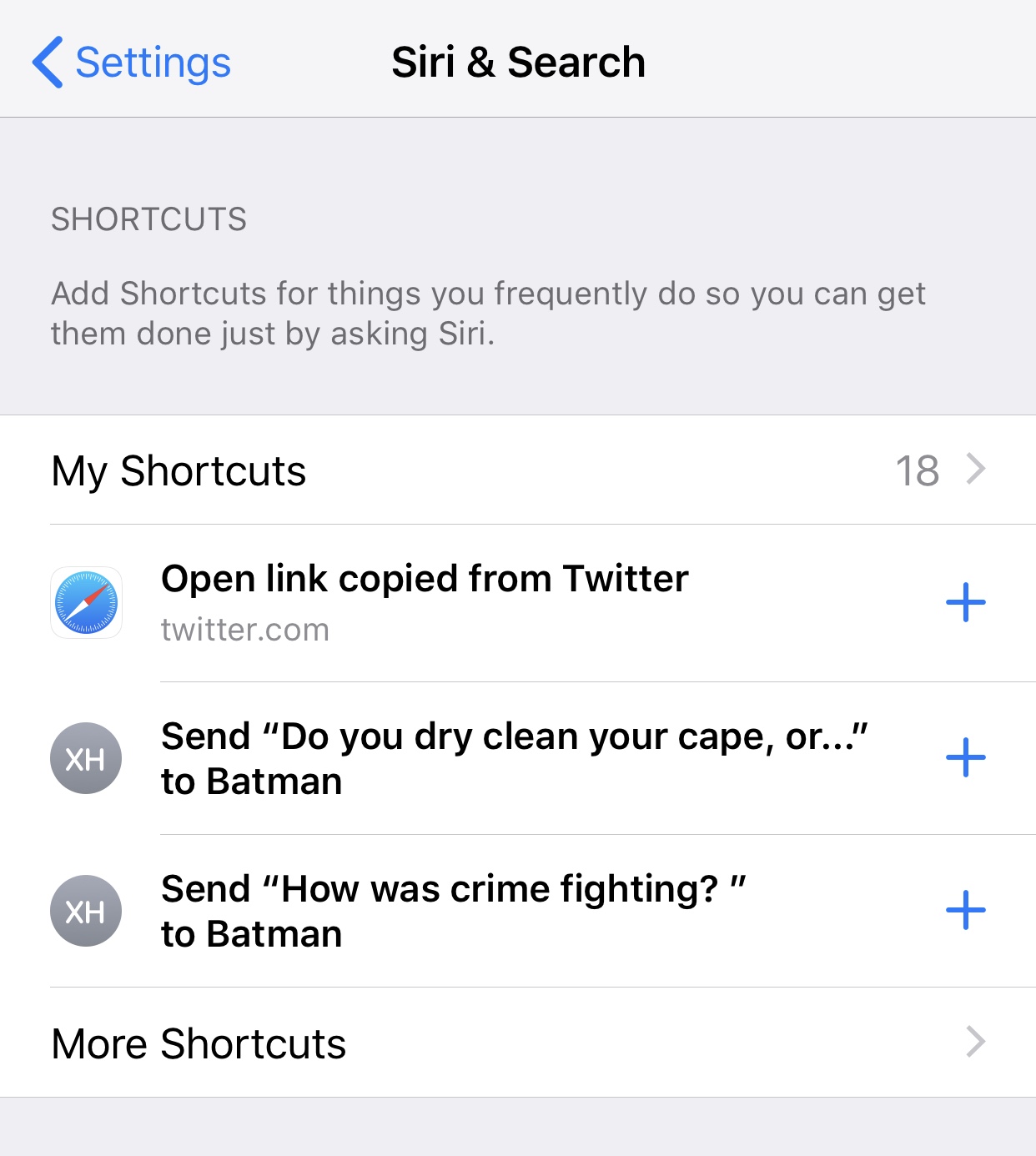 Tapping the plus button on the right of the suggested shortcuts will allow you to set a phrase to carry out that action. (And you can tap on “More Shortcuts” to see more suggestions). Your choices are limited to what you’ve recently done on your phone, like sending a message to a specific contact or creating a calendar event, but they can get surprisingly specific: you’ll notice texting options include the body of the message and calendar options include an event name.

If you find yourself frequently sending the same message (“sup”) or creating the same kinds of calendar appointments, Siri shortcuts can save you some typing time.

You can also combine shortcuts with typing to get even crazier. In the Settings app, under General > Accessibility > Siri, you’ll see an option for Type to Siri. Now, when you hold the home button, a keyboard will appear, and you can send Siri a query with the same ease as firing off a text.

Because you can assign multiple shortcuts to carry out the same action, you can give your favourite shortcuts two options: the phrase you say out loud and the keyword you can quickly type out.

What To Do When Siri Forgets Who You Are

As I was driving around this past weekend, I asked Siri for the directions back to my house — a frequent conversation we have. Only, this time, Siri played ignorant. 'I don't know your home address. In fact, I don't know anything about you.'

This method works with apps beyond Messages. You can use shortcuts to quickly open a specific webpage in Safari, set a certain reminder, or start a timer.

Most third-party apps aren’t available in the shortcuts section just yet, but Siri does currently play nice with Workflow (the app Apple acquired in 2017, which is now free).

Unlike Siri shortcuts in the iOS 12 beta, Workflow actions do work with some third-party apps. The workflows you create will show up in the Siri shortcuts menu in Settings when you’re ready to assign them a code word.