Everything You Need To Make Delicious Veggie Burgers

cookingfoodhow-torecipesskilletveganvegetablesvegetarian
To sign up for our daily newsletter covering the latest news, hacks and reviews, head HERE. For a running feed of all our stories, follow us on Twitter HERE. Or you can bookmark the Lifehacker Australia homepage to visit whenever you need a fix.

What I’m about to say may upset you and if that’s the case, I sincerely apologise. I think beef is just OK. Hear me out.

I cook an outrageously good rib-eye for special dinners at home, but I’d always rather eat lamb, pork, or chicken than beef, especially if it’s of the ground variety. Even fancy house-ground burger blends are still ground beef, whose highest calling is being rolled into a ball, showered with salt and pepper and smashed thin on a medium-hot griddle to maximise cheese-melting real estate and what I call “the salty crunchies”.

(Why medium-hot? To quote Matty Matheson, “Burnt beef tastes like shit!“) Fancy Chef Burgers are too thick, too bloody and too expensive; I’ll have the veggie burger, thanks.

Burgers have gotten out of hand. Not only are bistro pubs and hip bars topping them with everything from avocado to pork belly (both of which detract and distract), but the patties themselves are just too darn thick. A burger is not a steak; a burger is a sandwich and a sandwich is about balance between all the fillings.

Veggie burgers rule because they can taste like anything you want, but their potential is squandered on people who demand they taste like meat. As a person who just wants to see vegetables succeed, this hurts me on the inside. No matter what you do to plants, they’ll never be beef — and that’s fine! They can be their own thing.

The absolute worst are veggie burger recipes that promise even your “carnivore friends” (does anyone actually have one of those?) won’t know the difference.

First of all, meat-eaters will always know the difference; second of all, why aspire to mediocrity in the first place?

The world would be a better place if we recognised veggie burgers for what they are: infinitely adaptable bean fritters.﻿

The world would be a better place if we recognised veggie burgers for what they are: infinitely adaptable bean fritters. My personal breakthrough happened when I remembered that the perfect bean fritter already exists in falafel, whose texture comes from soaked — but not cooked — beans.

Surprise, surprise: soaked black beans make a bangin’ veggie burger, especially when the patties are thin and crispy. (Requisite disclaimer: never, ever try this with kidney beans, which will make you very sick if undercooked. While the toxin that makes kidney beans dangerous is present in other beans and legumes, the concentrations are so low that it’s not dangerous.)

Soaked beans make a better veggie burger, but they’re not enough to make a great one. Raw beans don’t taste like much, so all the flavour has to come from vegetables — and the fat they’re cooked in.

I grind up a mixture of aromatic vegetables in the food processor, then cook them slowly in refined coconut oil until they’re nearly bone-dry. This concentrates their flavour and ensures they absorb plenty of tasty fat.

An egg and some breadcrumbs bind the patties together enough to withstand smashing and flipping, but won’t turn pasty on you. These veggie burgers are legitimately great: substantial, super-crispy and flavorful enough to work with any toppings you like.

Dried beans and a food processor are the only musts here. If you’re vegan, skip the egg and throw in a tablespoon of vegan mayo; if you’re gluten-free, use rolled oats or gluten-free breadcrumbs. Aim for about a pound of raw veggies, any kinds you like — just don’t skimp on the onions and garlic.

I developed this recipe with a frying pan, so I can’t recommend grilling these burgers. If you must, par-bake the formed, chilled patties at 350ºF for 5-10 minutes per side, which should firm them up enough to survive a hot grill grate. This makes six moderately-sized burgers; double it for a crowd.

Place the beans in a large bowl and cover with enough cold water to allow them to triple in size. Soak for 12-24 hours.

Two hours before burger time (or the night before), start cooking the vegetables. Give everything a rough chop and transfer to the work bowl of a food processor. Pulse until minced, scraping down the bowl as needed to keep things uniform; this took me about ten one-second pulses.

Heat the oil in a large frying pan over medium heat. Add the vegetables and season with at least a half-teaspoon each of table salt and pepper. Cook, stirring frequently, for about five minutes — you just want to deflate them a little.

They’ll release a bunch of liquid right off the bat; when they start to dry out, reduce heat to low. Cook the vegetables, uncovered, for about an hour, stirring a few times to encourage even evaporation and browning. When they’re totally browned and mostly dry, turn off the heat and stir in a splash of soy sauce.

Let cool to room temperature, then refrigerate until you’re ready to make the patty mixture. 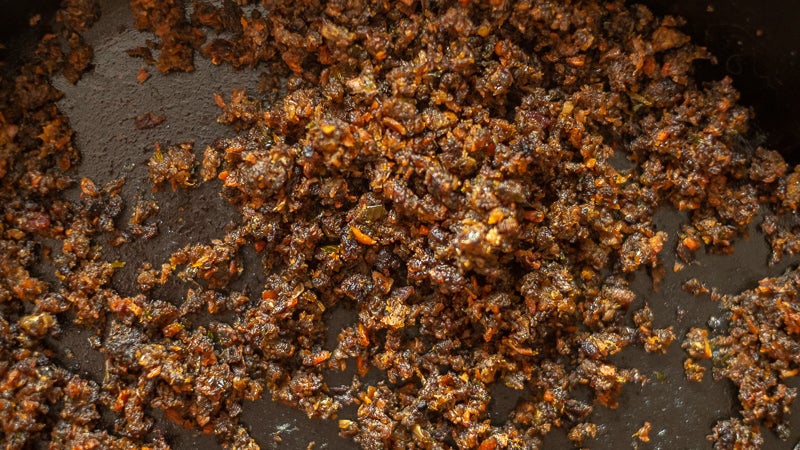 While the vegetables cook, toast your nuts (if using) in a 175°C oven until thoroughly browned and aromatic as hell, 10 minutes for the walnut halves I used. (Other nuts will take less or more time; keep an eye on ’em.) Let cool to room temperature.

To make the patties, drain and rinse the beans, then transfer to the food processor with any nuts and herbs you’re using. Pulse until the mixture is finely ground, scraping down the sides of the bowl frequently. Aim for mostly-uniform particles about the same size as polenta. 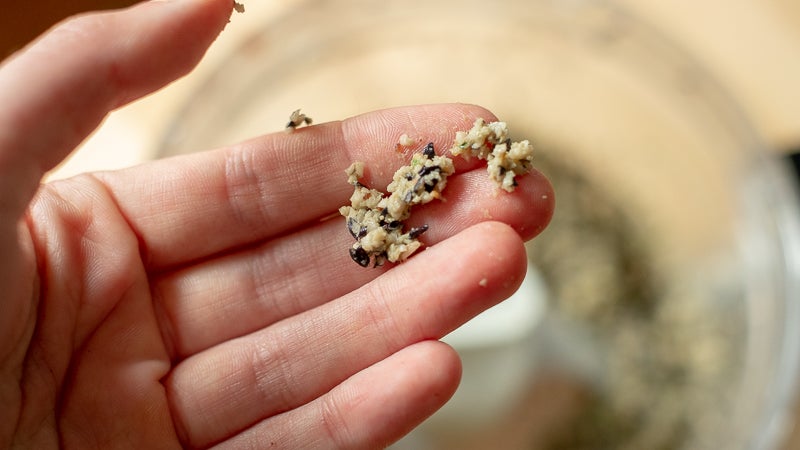 Add the cooked vegetables and the egg to the food processor, along with another big pinch of salt and pepper and pulse a few times to combine. Transfer this mixture to a mixing bowl and assess the texture: make a palm-sized patty about half an inch thick, then pick it up by an edge and dangle over the bowl.

If it holds for a few seconds before falling, perfect; if not, stir in breadcrumbs a tablespoon at a time until it does. My mixture needed a scant quarter cup of breadcrumbs this time.

Fold in the polenta if using, then form mixture into patties, transferring to a parchment-lined plate or baking sheet as you go. Keep the patties 7-10cm in diameter and about a 60mm thick for best results. 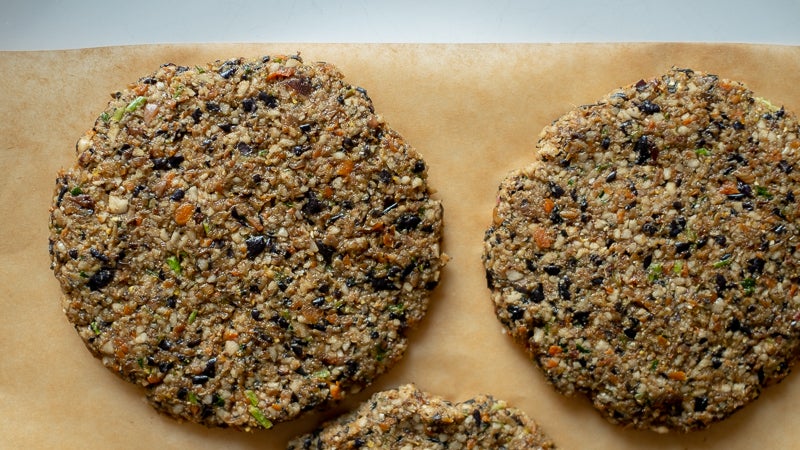 Freeze the patties for five to ten minutes or refrigerate for half an hour before cooking. While they chill, heat up a wide frying pan over medium heat and prepare your buns and condiments. Add a tablespoon or two of oil to the frying pan, heat for a minute, then salt and pepper both sides of the patties.

Carefully slide in as many as comfortably fit, gently pressing down with a metal spatula to maximise the crust. Cook for four to five minutes, flip, press and repeat. Serve on toasted buns with all the fixins your heart desires.

Everyone deserves a crunchy, salty, delicious burger from time to time and I’m so glad I’ve finally figured out how to make an excellent meatless one. I won’t sit here and swear up and down that one bite will put you off beefy burgs for life, but if you associate veggie burgers with Play-Doh, I think these could change your mind. 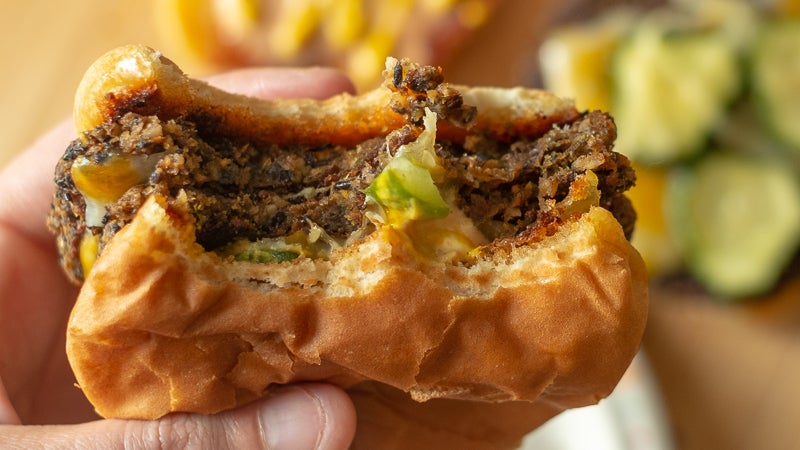