For a while, I had a bit of an obsession with buying vinyl. My mum had let me have the large cabinet record player that lived in our living room during my childhood, and once I got the 225kg thing into my house I was determined to listen to it as much as possible.

A lot of artists put out their new albums on vinyl now because it’s the trendy thing to do. With those, you know what you’re getting into. But for those random obscure op shop finds your outcome might not be quite as predictable, and most don’t exactly have a spot for you to take a record for a test drive before you buy.

A new web app called Record Player makes that possible. With it you can take a picture of the front of that album and it will find the album on Spotify (you need a Spotify account to make this work) so you can stream it on the spot.

All that magic happens thanks to Google’s Cloud Vision API and the Spotify API. 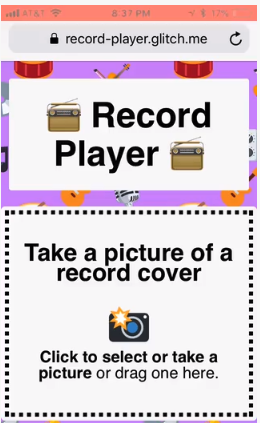 Yes, you could just look up the album on Spotify yourself, and no it isn’t going to tell you that the record in your hand at the store is so covered in scratches you’ll never actually be able to listen to it – but it is pretty cool. It could also come in handy when you just want to listen something you have a home, but don’t want to fire up the ol’ turntable to make it happen.