qnaprapid reviewreviewstorage
At Lifehacker, we independently select and write about stuff we love and think you'll like too. We have affiliate and advertising partnerships, which means we may collect a share of sales or other compensation from the links on this page. BTW - prices are accurate and items in stock at the time of posting.

NAS devices have transformed from simple storage devices into multimedia and data management centres that are as much at home in the home as they are in the office. The QNAP TS-453Be straddles that line between work and play, offering a bunch of connectivity, applications and storage options. And while it offers a rich set of features, it’s let down by some usability challenges.

The QNAP TS-453Be is a four-bay NAS (network attached storage) device designed to make it easy to store and share files on a network, allow access when you’re not in the office and provide an easy place to back up your data.

QNAP has been in the NAS business for a while and has delivered a number of solid products over the years. The TS-453Be (it really needs a catchier name) continues that tradition with an add reactive unit that sits quietly and does its work with very little fuss. As a bonus, it also can be used as a media centre as it has a bunch of A/V inputs and outputs making it a very versatile unit.

While QNAP calls the TS-453Be a NAS it’s more like a headless PC system. So, it can run apps or work as a media player once you install a few extras. The most useful extra is the HybridDesk Station that adds a web browser, YouTube, Spotify, a media player and other programs to the device so, when you connect it using HDMI to a display, you can use it as a remote PC.

There are also backup apps. For example, it can act as a server for Acronis TrueImage so you can backup computers and mobile devices easily.

Installing drives is super easy and requires no tools as the drive caddies use a clip-on system that holds drives securely. I installed four 2TB Seagate Ironwolf drives. That took about two minutes total. Once the NAS was connected to the network it took about another hour until it was ready to use with a couple of user accounts for other people and a couple of handy apps for media sharing and managing backups. 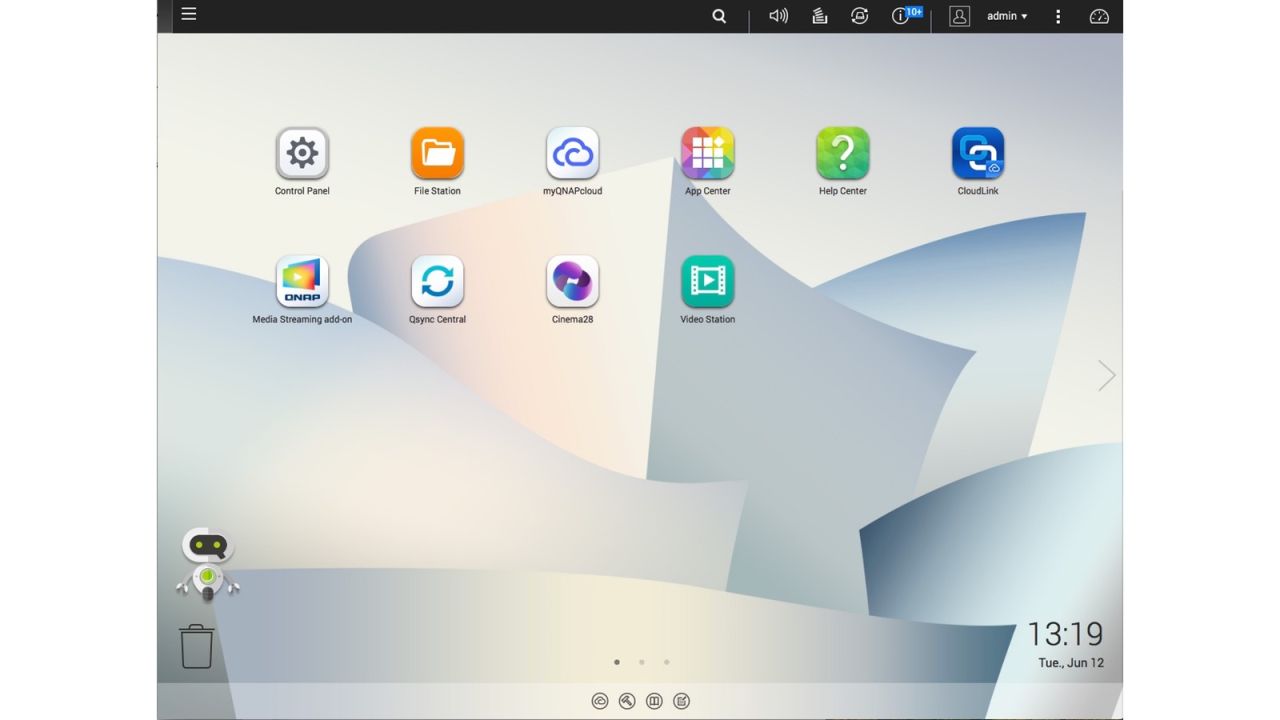 While QNAP has done a great job at putting an attractive graphical interface into the configuration of the QNAP TS-453Be it’s still pretty hard to use.

While basic tasks like creating users, assigning them to groups and setting up folders and permission were easy through the Control panel, I found some of the apps very tricky to set up. For example, I connected the QNAP TS-453Be to an external display over one of the HDMI ports and wanted to watch a movie it wasn’t clear that I also needed to install the Remote app to my smartphone to remotely control it or that I needed to connect an external mouse and keyboard, using one of the five available USB ports.

The documentation that’s available for the QNAP TS-453Be is not very straightforward to read and is quite technical.

If you’re looking for a storage device then the QNAP TS-453Be is a good choice. It offers plenty of options to ensure you get the most out of the four storage bays and it’s reasonably easy to set up for sharing storage.

But, as a media server, which is a big part of what this device offers, it’s not very easy to use and the documentation is quite opaque. Those capabilities aren’t just “nice to have” extras – the presence of two HDMI and a slew of USB ports tells us some decisions were made about what the the QNAP TS-453Be would be used for.

With a little bit of attention to the user interface and some better documentation, this would be a great device.